Home » What Areas Grew the Most? Single-Family Home Building in 2020

What Areas Grew the Most? Single-Family Home Building in 2020

By The National Association of Home Builders
Jul 9, 2021

According to NAHB analysis of the Survey of Construction (SOC), new single-family starts expanded at a fast pace in 2020. Nationally, 993,635 new single-family units were started in 2020, 12% higher than the units started in 2019. It marked the fastest growth rate since 2013 and the highest count of starts since the Great Recession. 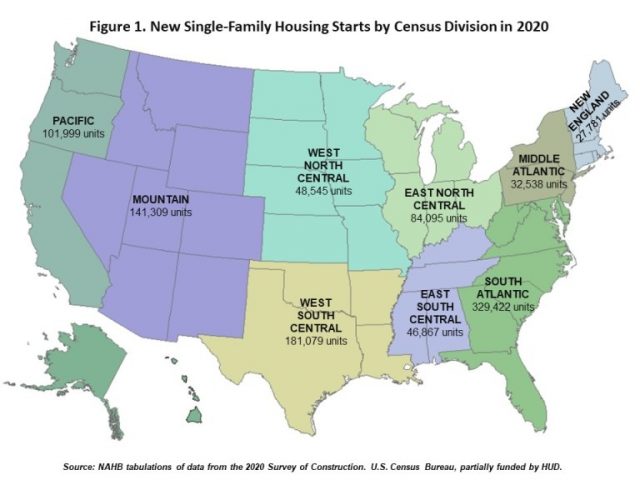 In 2020, nationally, new single-family housing starts rose by 12. Five out of the nine divisions grew faster than the national level of 12%. The New England Division led the way with a 27% increase, followed by the Mountain Division and the East North Central Division with an 19% increase each, the South Atlantic Division and the West South Central Division with a 12% increase each. The growth rates of the other four divisions were below the national level.

Compared to last year, seven out of the nine divisions, including New England, Mountain, East North Central, South Atlantic, West South Central, East South Central and Pacific, had an acceleration in 2020. Meanwhile, the West North Central Division and the Middle Atlantic Division experienced a deceleration in growth in 2020.  Noticeably, the New England Division grew by 27% in 2020, following a decrease of 15% in 2019. 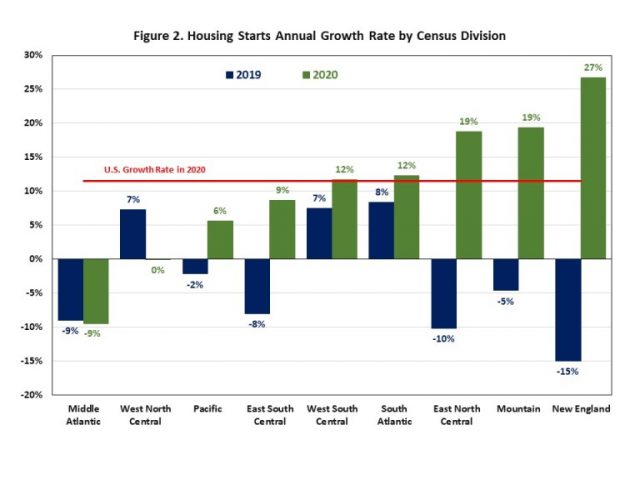