By The National Association of Home Builders
Dec 22, 2020

For the third quarter of 2020, NAHB’s Home Building Geography Index (HBGI) found construction gains for traditional second home markets. High-concentration second home counties were defined based on the proportion of the local housing stock that are non-rental properties and not classified as their taxpayer principal residences. Counties with relatively high concentrations1 of such residences were designated as “second home counties.” As of 2018, Americans owned about 7.4 million second homes, accounting for 5.6% of the total housing stock. 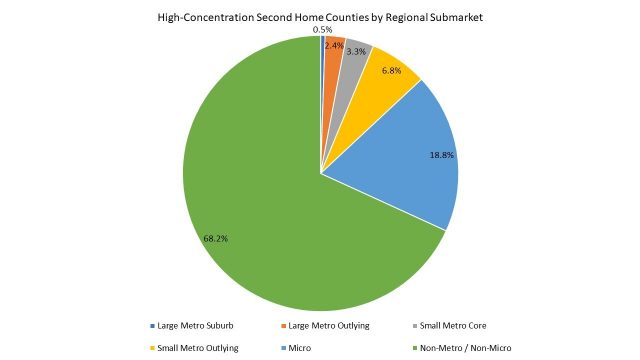 Housing is weathering the ongoing economic recession well. Yet the bifurcated nature of the ongoing recovery is illustrated by some of the gains for construction in second home markets. High-concentration second home counties’ share of total single-family home building is less than 10% of the market and a smaller 5.6% for multifamily development. Yet, remote work arrangements have made it possible for some wealthier Americans to move to alternate locations that are not just small, suburban shifts from within their current metro area.  More fundamentally, second home demand may also be benefitting by an acceleration of retirement plans, as well as stock market gains.

The full third quarter HBGI data can be found at nahb.org/hbgi.—BY LITIC MURALI