By S. Claire Conroy
Nov 27, 2019
A photo of Ray and his wife Shelly in their Pacific Palisades house, from Themes and Variations: House Design: Ray Kappe: Architects/Planners (House Design, 3) by Michael Webb

Ray Kappe, FAIA, founder of the Southern California Institute of Architecture in Los Angeles, died on November 21 at the age of 92. He leaves behind his two architect sons Ron Kappe and Finn Kappe; a daughter Karen Kappe, and his wife of nearly 70 years Shelly. He also leaves behind an important legacy of contributions to residential architecture, chief among them his own exemplary house, which he built in 1967 in Pacific Palisades, Calif., and the first LEED Platinum house in the country, which he designed for LivingHomes founder, Steve Glenn.

For many years, he was celebrated primarily for his work as an educator. But he designed more than a hundred houses during his 70-plus years in the profession, first in production housing, then in custom residential, and ultimately in cutting-edge prefabricated housing.

His custom work especially took great care to preserve the features of the site and to connect human beings with the natural environment, but his production housing—the quintessential midcentury patio home—promoted indoor-outdoor connections, as well. In 2004, when I was editor of Residential Architect magazine, we inducted Ray into the our Hall of Fame, one of a trio of Leadership Awards. For the article I wrote about him on the occasion, he told me, “You know, architecture doesn’t have to do it all. The natural layer should show through too.” (To read the article and others about his work, visit his website.) 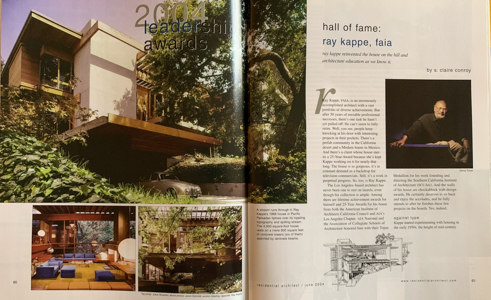 His own house hopscotches across its precipitous site, avoiding rocks, ravines, trees, and a meandering stream, with a system of concrete supports and laminated beams. Just 600 square feet of concrete towers and beams support the 4,000-square-foot structure. Inside, seven levels suspend over one another, often with no partition or rail dividing them. Despite hundreds of tours and events, he assured me, “We haven’t lost anyone yet, and we raised three children in the house—including two rambunctious boys.”

He also designed several other houses in his neighborhood, taking me along to one of them to address an issue—apparently his work came with a lifetime warranty, too. Another house we visited was for a repeat customer for whom he designed and redesigned parts of the house over the course of nearly 20 years. The decades of additions and alterations were seamless because Ray’s work defied time and trends.

I asked him why he thought he hadn’t received as much recognition as his peers, the Case Study Modernists. He posited that it was because he hadn’t picked a style and stuck with it. He was more interested in problem solving and architectural investigation than in adhering to a school of thought or theory. “Some of my clients wanted pitched roofs, so I experimented with long, low gables,” he told me. “And most of my clients didn’t want steel.” He agreed he was probably a modernist, with a lower case “m,” but perhaps the term regionalist was the better fit.

Coinciding with his induction into the Hall of Fame in 2004, I organized a symposium in Los Angeles focusing on different architectural solutions to the problem of the American house. Prefabrication was the great white knight at the time, and we had many current champions of it on the speaker rolls. But Ray predated them all, having attempted to apply factory-built processes to housing back in the 1960s. He told me the greatest hurdle then was quality control—a problem that few have yet to fully solve.

I had Ray on the speaker roster for the symposium and when he arrived before his session, he brought with him several carousels of slides. We were solidly in the PowerPoint era by then, so we thought it quaint (and scrambled to find a projector). Ray also invited as his guest a developer who was interested in collaborating with him on a project. That developer was Steve Glenn, and they went on to design and build the first LEED Platinum house in the country—Steve’s own custom house in Santa Monica—and a portfolio of other houses for LivingHomes’ line of prefabs. Slides or no slides, Ray was nonetheless in the vanguard of design thinking and a durable leader in the profession with no desire to retire—ever.

It should be noted that Ray owed his success in no small part to his wife, Shelly. She is the warm extrovert to his gruff introvert, tirelessly promoting him, his work, and preserving the archive of his accomplishments—or should I say theirs? She is the full partner in all they achieved together.

Ray will be greatly missed, but there’s no doubt his was a life fully lived.

More about Ray and his work:

A book about his houses, written by Michael Webb: 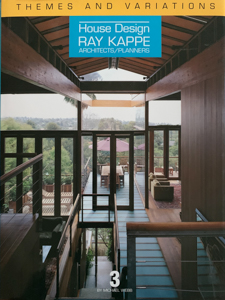 A tour of his house in Pacific Palisades:

An article comparing his house and one he worked on over the course of 20 years:

A recent podcast (with transcript) with Ray and Shelly: