Wicker Park in Chicago is a landmark district of handsome homes, many of them dating to the late 1800s. One of the city’s first outer-ring residential enclaves, it is now a vibrant, eclectic neighborhood just a 10-minute train ride from the skyscraper core. Among residents, the preservation ethic is strong. The architects took pains to restore the exterior details of this red-brick Italianate structure built in 1885. But inside, preservation finds common ground with modernism.

When the owners purchased the house, it was in severe disrepair despite being used as a three-unit rental. “We felt unsafe being in the house,” says Kevin Toukoumidis, AIA, whom the new owners hired for the gut renovation. “A 100-year-old woman was living on the second floor and the house probably hadn’t been touched in 40 years.” 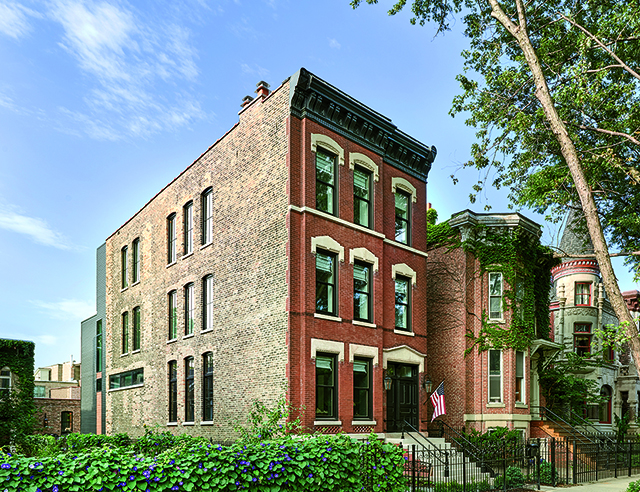 The clients had an ambitious vision. They have two young children and a Portuguese water dog, but were looking far into the future. The goal was a house that would support multigenerational living. Their request for five bedrooms and four-and-a-half baths, a playroom, and various other flex spaces would mean stripping the building to its shell and digging out the dirt crawl space for a full finished basement. The architects also added a svelte, three-story addition along the south-facing rear façade.

“Our biggest challenge was how to transform this house for a modern young family,” Kevin says. “The design direction was an addition and double-height glass on the entire back wall, and to do that you are creating a challenge with the structure.” 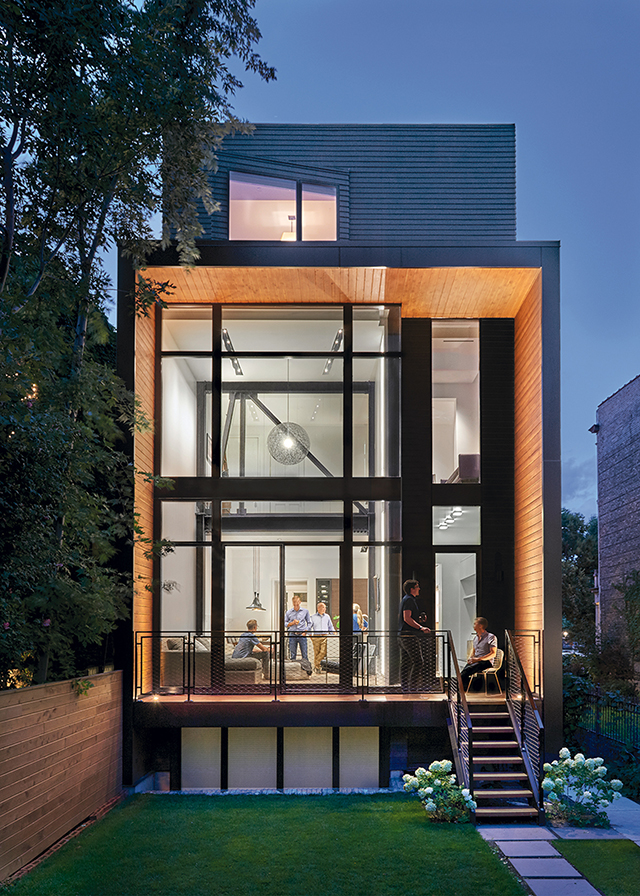 A challenge but also an opportunity. The glassy addition led to one of the interior’s most striking features. Marking the transition from old to new, an artfully expressed steel moment frame supports the opening in the original back wall. A nod to the city’s architectural history and industrial past—Chicago is home to the world’s first skyscraper—its strong diagonal lines define the glass-walled second-floor office overlooking the great room.

The 1,070-square-foot addition helped accomplish one of the most difficult tasks of renovating urban homes, which is opening them to the outdoors. Yet while the new plan is modern, it tells an origin story. “The clients appreciate the modern and the historic,” Kevin says. “The reason they loved this house is because they could have both.”

That meant embracing some of the finer aspects of 19th-century living. For example, a traditional entry foyer and stair hall opens to an intimate “salon” with an existing fireplace at the front of the house. A hat tip to entertaining’s more civilized past, this space is used for conversation and cocktails when the couple have guests. Beyond the pocket doors is a formal dining room for large family gatherings. It leads through the butler’s pantry to a sparkling, modern kitchen with a large island and separate breakfast table. 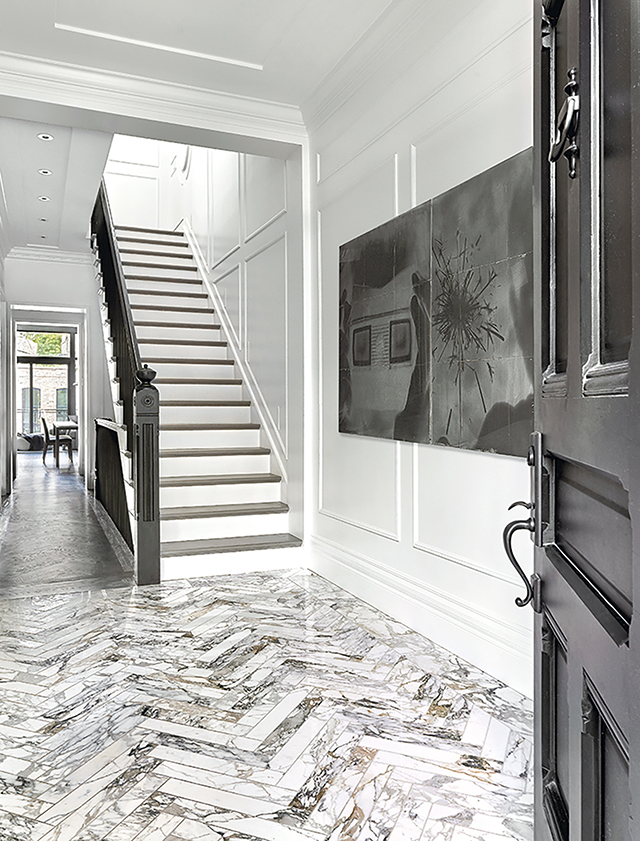 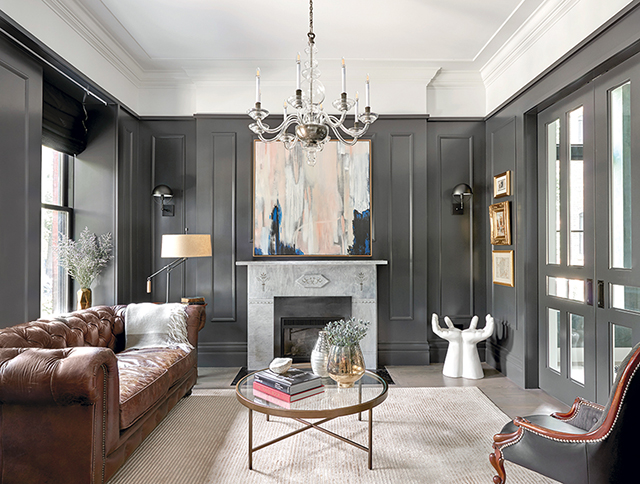 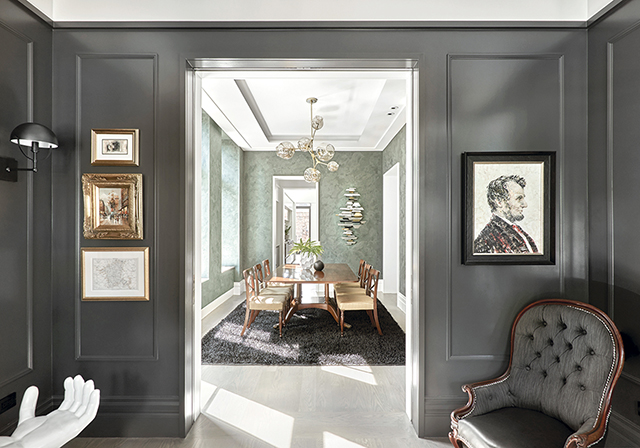 Here, the floor plan moves from partitioned to exposed. The light-filled kitchen faces the double-height great room, deck, and backyard, bookended by the detached garage. Tucked behind the great room’s two-sided fireplace, a mudroom offers a side passage between the deck and kitchen. It contains a key station and custom cubbies for each family member, even the dog. “We wanted the warmth of the double-sided fireplace to greet you as you come in from work,” says Kevin. 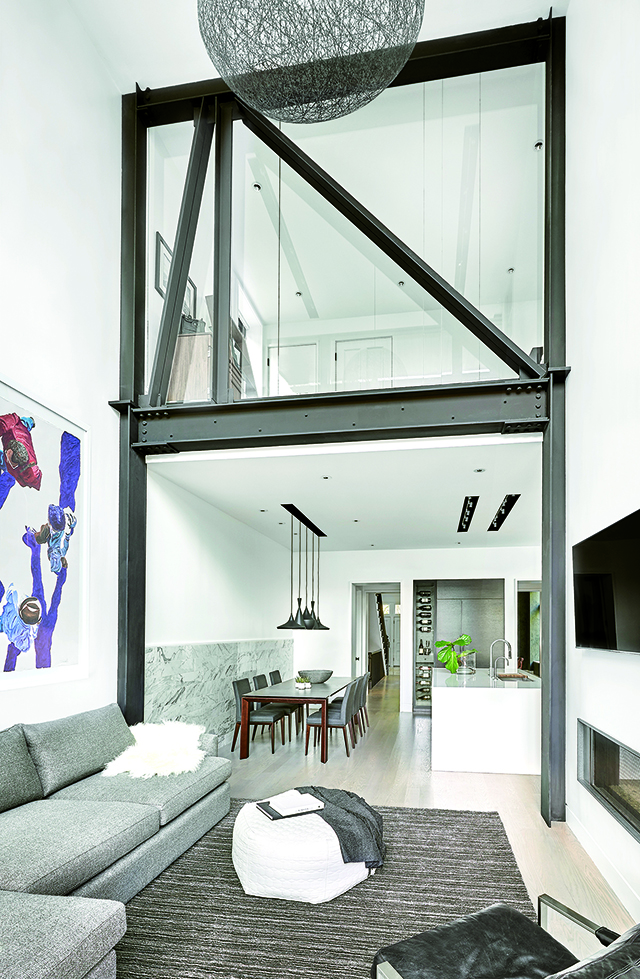 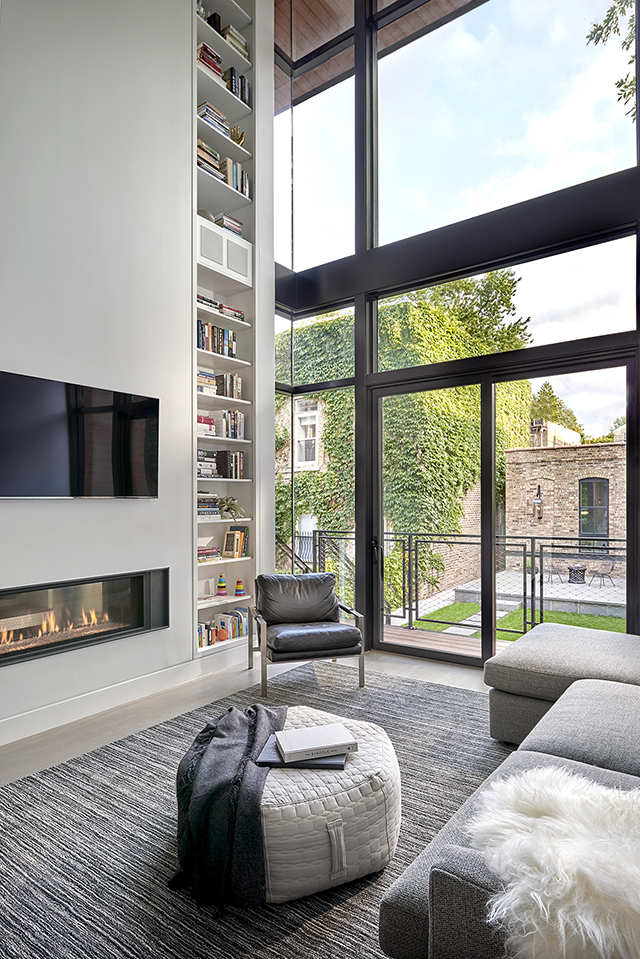 The upper floors have an airy logic too, thanks to a skylight-topped stairwell and new windows on the east façade. “Although this was a standard city lot, it had the advantage of sitting next to a lot containing only a coach house, so we were able to add windows,” Kevin says. The second floor holds the master suite, a small library, and the office with its glass wall overlooking the great room. At the top of the house is the children’s realm with three bedrooms, two baths, a laundry, and a playroom. One lucky child gets the rear bedroom with a window seat jutting toward the city skyline. 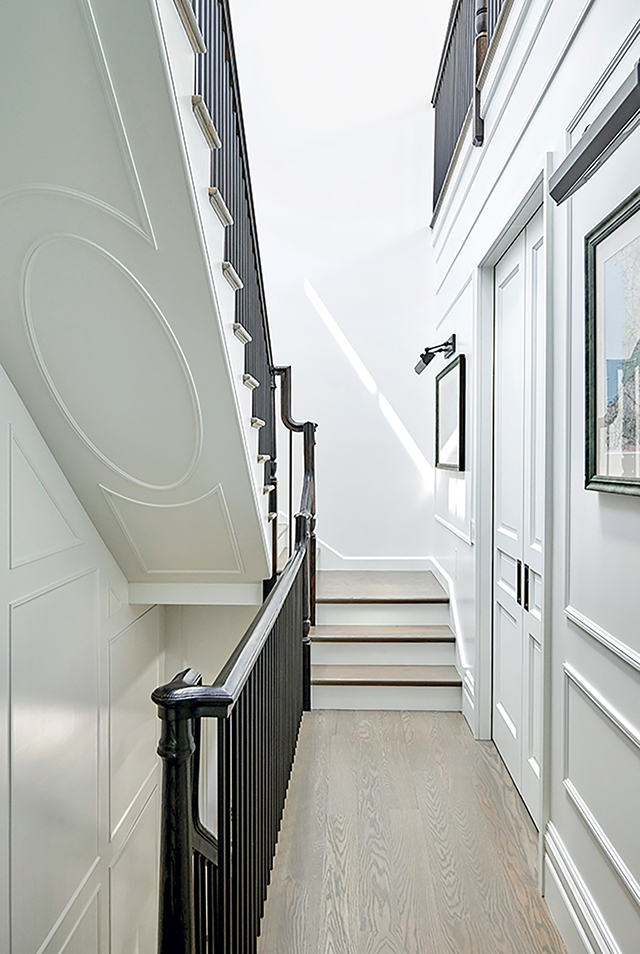 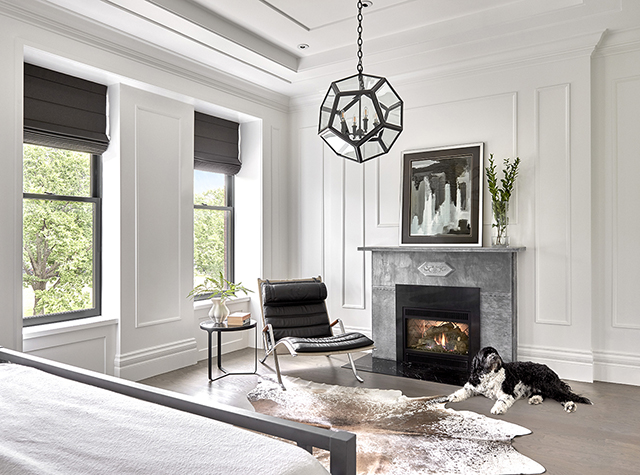 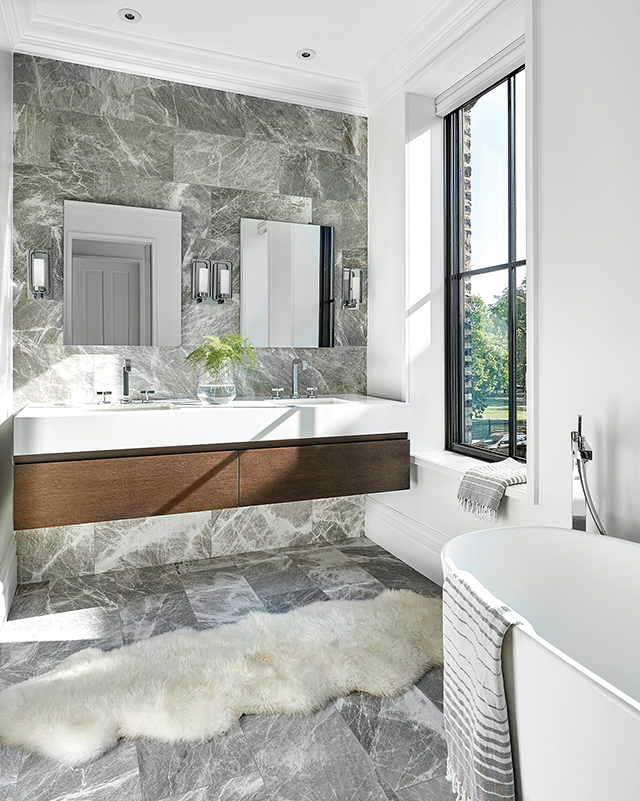 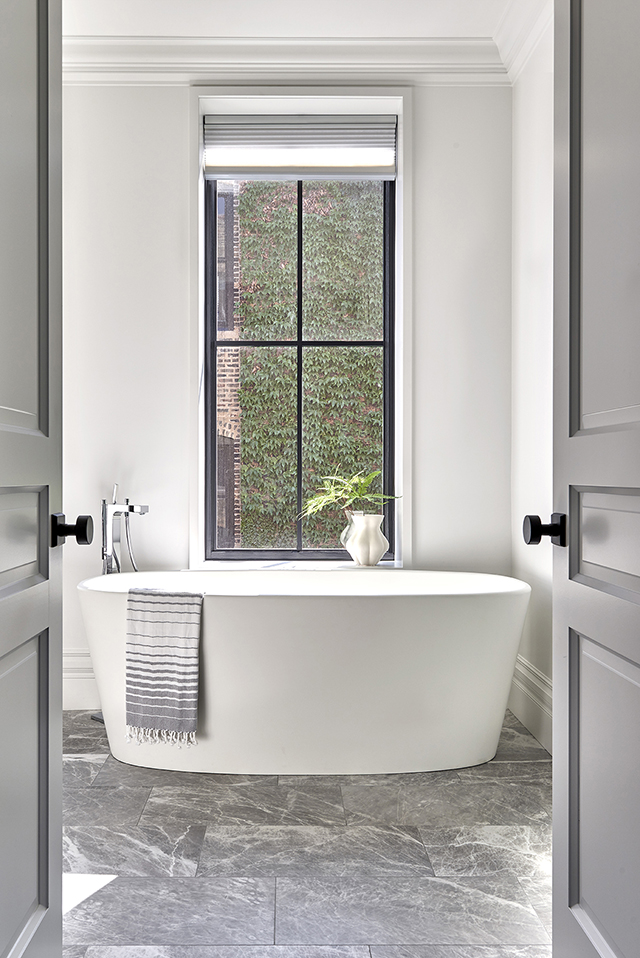 If period details give a house character, this one remains friends with the neighbors without ever feeling staged. “Whenever we added a historic detail in the Italianate part of the house, we simplified it for a clean, fresh look,” Kevin says. “They’re a nod to history but more elegant in execution.”

During demolition, the architects recycled everything, storing architectural ornament to reinterpret or reuse. “We saved the three fireplace mantels, put them in storage, and reused them,” says Kevin. “Everything else is new.” The foyer’s custom-cut herringbone marble floor is similar to the stone found in the house. Oversized wood-and-glass pocket doors at the salon were inspired by the worn-out originals. Likewise, the architects drew a larger version of the oval window on the first stair landing and copied the stair rail details. They also added drywall ceiling details and picture molding in the old section, including a panelized wall concealing the stair-hall coat closet.

Warm, durable materials add to the house’s livability and appeal. Floors are gray-stained white oak with a herringbone pattern in the main hallways. The kitchen was designed to function well despite being on display. Dark oak cabinetry warms the white lacquered upper cabinets and quartz countertops, which reflect light from the new clerestory windows facing the empty lot. Above the chef’s cooktop, stainless steel cabinets and an integrated exhaust hood lend a streamlined look, while a lip on the marble backsplash offers a place to hang and store items artfully. A drawer at the wine area holds bottle openers and glassware, and a wet bar and walk-in pantry around the corner alleviates clutter. 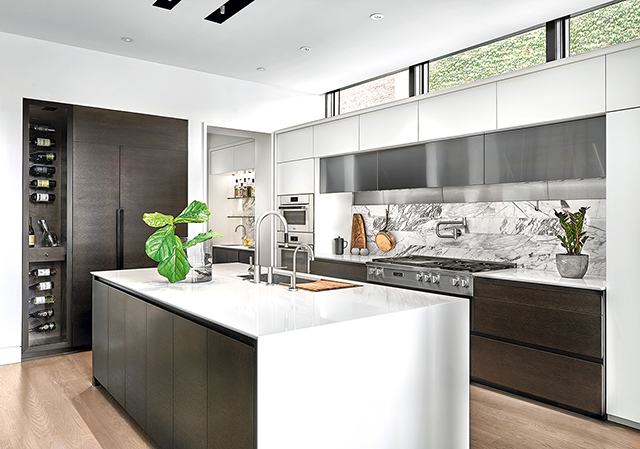 “Every inch of the house was utilized for storage so no space is wasted, which is critical in an urban home,” says Kevin. Another example of inventive storage design is in the great room. “The clients have a lot of books they wanted to display, but it’s hard to find space for them when there’s a lot of glass,” Kevin says. Here, the bookcase acts as a design feature by cleverly spanning two stories; upstairs, the back of the bookcase is accessed from a pocket library in the office.

Early on, the clients voiced their desire for a flexible floor plan that would work equally well for their growing family, aging parents, or just the two of them when the kids move out. With that in mind, the playroom and lofted office can function as multipurpose spaces. And the basement—bedroom, bath, laundry, and large family room with floor-to-ceiling windows to the backyard—offers possible in-law quarters. Plumbing is also in place for a small kitchenette, and the pantry can be fitted with an elevator connecting all floors.

“Design is an intimate process, and the best story for us is when the client says the house has impacted their lives,” Kevin says. “We want them to be thrilled every time they walk into the house.” And they are. Not long ago the clients accepted job offers on the East Coast, but in the process of house-hunting they couldn’t find anything they loved as much as their Chicago house and neighborhood. So they decided to stay. “Our philosophy isn’t just about steel and glass and architecture but connecting deeply with clients and changing their lives,” Kevin says. 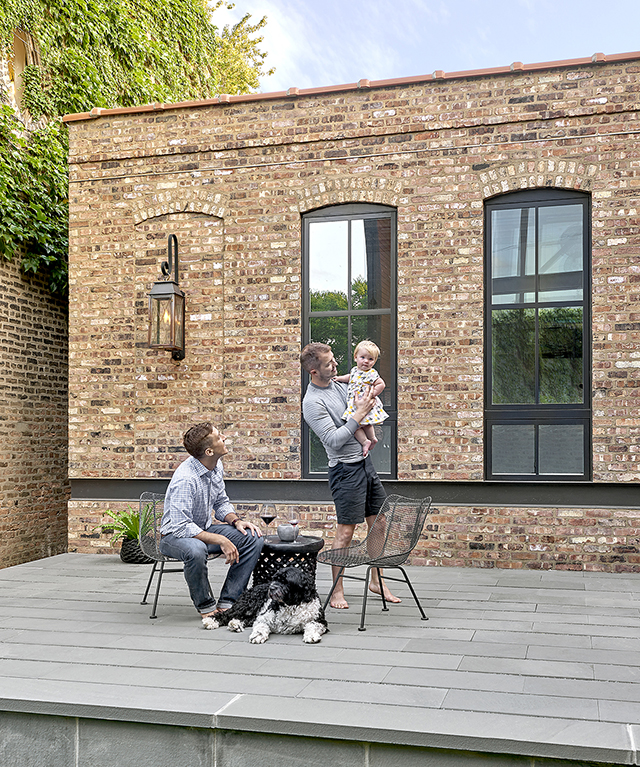 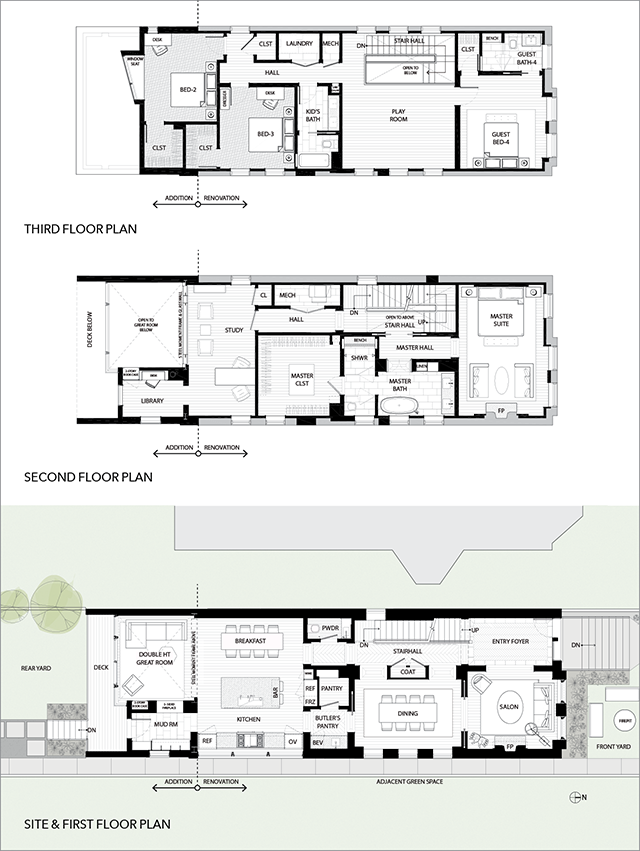