Architect Jim Zack, AIA, was born into building, and it has served him well in San Francisco’s hot, haute housing market. Practicing residential architecture here is a blessing and a curse. Thanks to the lucrative tech industry that has come to define the Bay Area, there is a steady supply of sophisticated clients for whom money is no object. That’s all well and good if you’re up for the challenge of demanding clients, stratospheric construction costs, and a fraught approvals process, which can drag on for years.

At heart artists and entrepreneurs, Jim and his wife/business partner Lise de Vito have a track record as savvy navigators. Since its launch in 1991, the firm has embraced diverse projects ranging in type from single-family houses to restaurants, condo buildings, and speculative development, and in price from $1 million to $6 million. The couple have forged a path for themselves by following the opportunities in their own backyard and building on their strengths.

Indeed, building is in Jim’s blood. His dad was a serial remodeler and house flipper. Growing up in Carmel, California, Jim helped him build a house for class credit while attending junior college. “Dad had a house on a big lot; we tore it down and built two small ones,” he recalls. “He said, if you help me do this, you can have one of the houses.” Before going on to graduate school at UC Berkeley, Jim bought another house for $99,000 and flipped it. These projects conferred more than one kind of currency. By the time he got a Master of Architecture degree in 1990, he had almost eight years of construction experience and a solid platform for launching a design/build business.

That’s no small advantage in this rarified realm. While some design/build firms are primarily builders who also do design work, Jim is licensed as both a contractor and an architect, which allows the couple to provide either service or both, depending on the project. Structured as two separate legal entities, the design/build model is one way they differentiate their firm from the competition, which is fierce. “I heard there are more architects here per capita than anywhere in the world,” Jim says. While there is no official source for that number, AIA San Francisco alone lists more than 200 firms.

When Jim and Lise met in 1991, she was fresh out of architecture school and working for another local firm. When he needed help on a project, she moonlighted for him. Soon the volume of work was more than he could handle, and Lise hopped over officially in 1997. “By that time we had already been doing work for ourselves,” Lise says. “We purchased a property, did an extensive remodel, and condoed it, doing what we could to max out the value. We lived in it for several years, sold half of that property, and continued to do speculative work.” In addition, Jim and Lise focused on residential renovations and new construction for clients. In the late 1990s they stumbled upon a restaurant renovation, and for the next 10 years or so became the go-to design firm for restaurant renovations, but they no longer pursue that sector.

The couple’s current model of practice—20 to 40 percent design/build, the rest design only—has been in place since the early 2000s, but their bandwidth has grown since then. Fluctuating between 12 and 20 employees, the current roster of 15—four designers plus Lise and Jim, and 11 project managers and carpenters—“is a little low for us,” Jim says. It’s enough talent, though, to take on 15 to 20 projects a year, with five or six waiting for entitlement at any given time. Lise and Jim usually team up to design development projects but work separately on client commissions.

“The construction labor market is extremely tight, especially here,” Jim says. “Anyone who’s any good is already working unless they’re just moving into the Bay Area.” The wildfires occurring 50 to 60 miles inland have made this condition worse. Almost 20,000 homes have been lost in the last five or six years, he says. With all the replacement stock under construction, “that’s put a strain on available labor in my market.”

In fact, the firm has just begun to design a $1.2 million, 3,000-square-foot house in Sonoma County for a couple who lost their home to wildfire. “I think the thing we do best is wealthy people’s houses, whether in the city or the country,” Jim says. “We love single-family custom work where we can design a high level of detail.” That includes executing metal fabrication and steelwork, something the carpenters can do on-site more economically than a typical contractor could, Jim says. “We design so we can control the fabrication and come up with ways to get things built on-site, creating digital files that are sent out to get parts made.”

Small commercial and multifamily buildings—four to nine units, some of them mixed use—are also a substantial part of the business. On the boards is a 3,000-square-foot office renovation for a venture capital company. And plans for the couple’s dream project are in the works: transforming a “dumpy warehouse” into a five-story mixed-use building on 15th Street with six residential units, plus retail and two or three commercial spaces. Currently they are leasing and subletting the building with an option to buy. 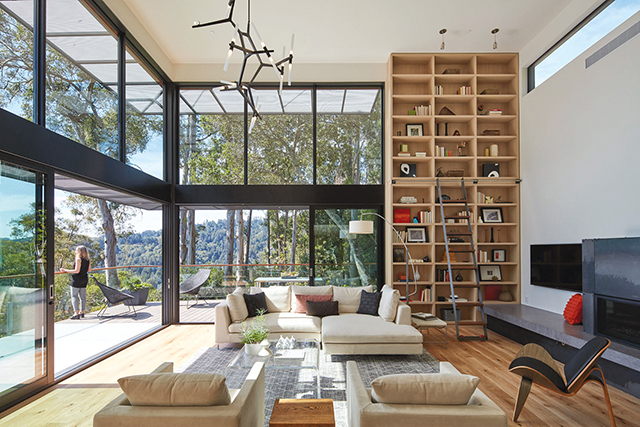 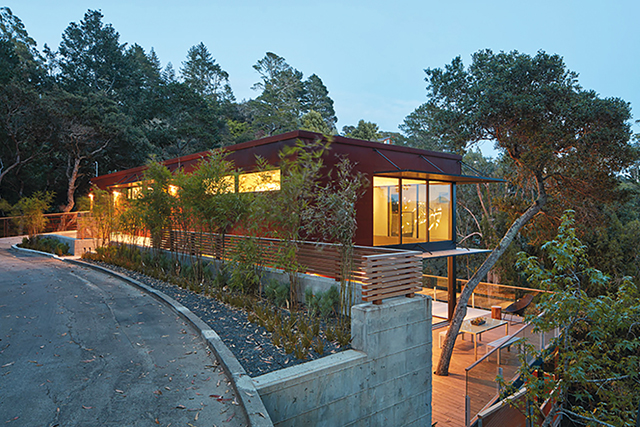 San Francisco’s serious housing shortage means that new homes typically sell within a week with multiple cash offers, Jim says. That makes speculative development almost a no-brainer. But it’s not for the faint of heart. Currently the firm is piggybacking on the success of 2014–2015’s Steelhouse 1 + 2. That was a two-unit courtyard compound where they created a new three-story house at the front of the lot and remodeled the existing house at the back of the deep lot, with a shared green courtyard between them.

GrandView, a similar project on a rare vacant lot in Upper Noe Valley, started out on spec but is now being designed for the client who had purchased Steelhouse—a 35-year-old with a budget of $6 million. The 25-foot-wide-by-125-foot-deep lot cost $1.35 million and had 15 offers, Jim says. He and a builder—a long-time development partner— prevailed in the purchase and designed and entitled two houses, then offered the package for sale. “We made a little money off the land deal and removed the risk of having to get money to build and sell the houses,” Jim says. “The client hired us to design and build the two houses for use as his estate. He will live in the front house with his kids and partner, and the rear house is for entertainment, a study, and studio.” 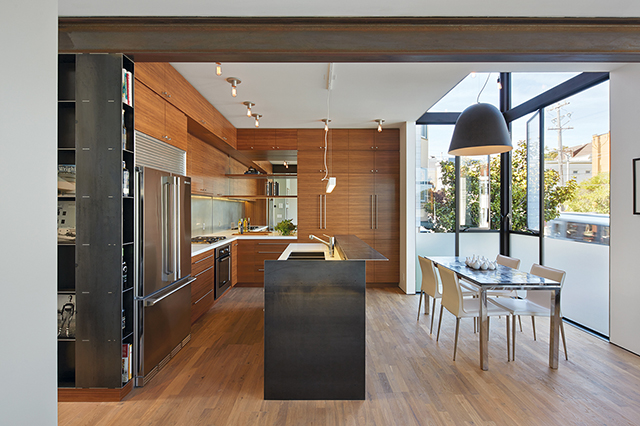 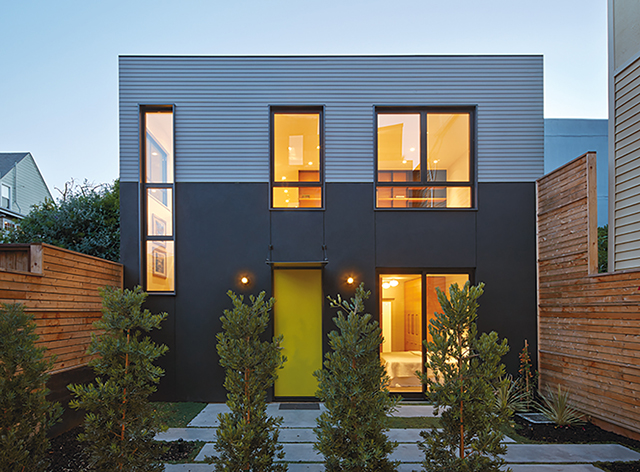 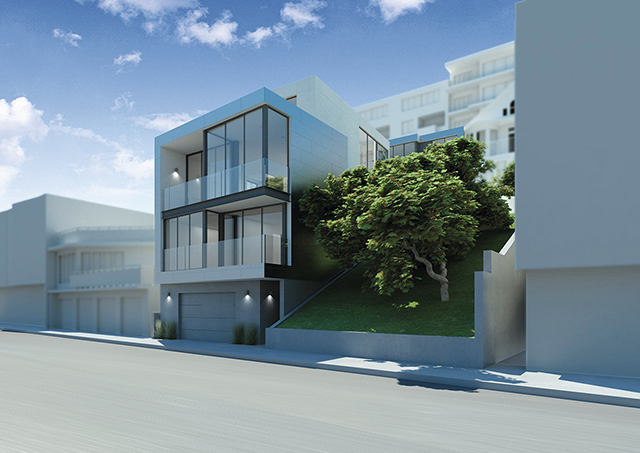 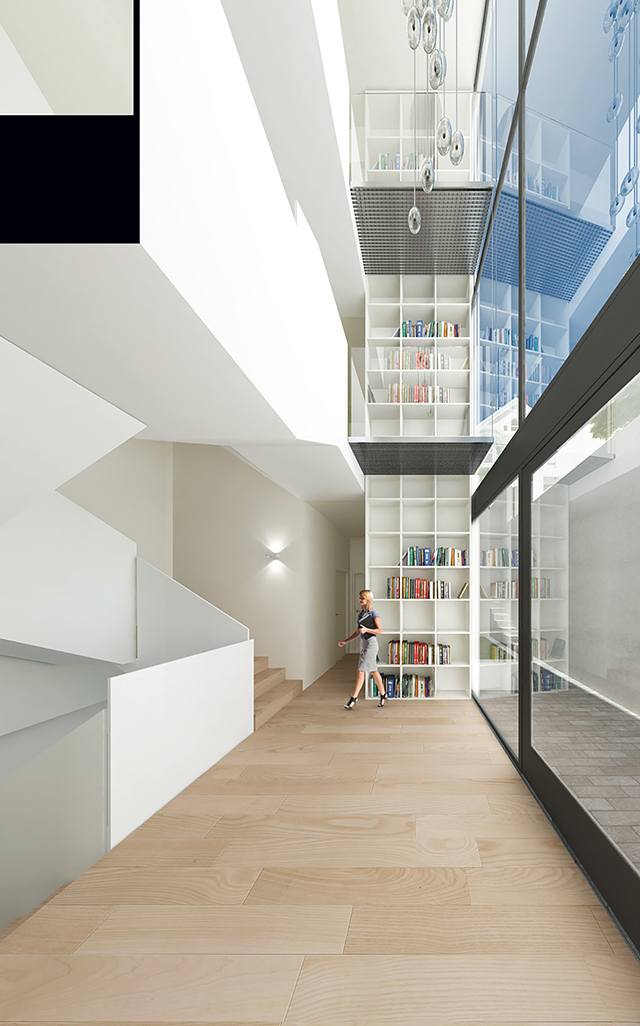 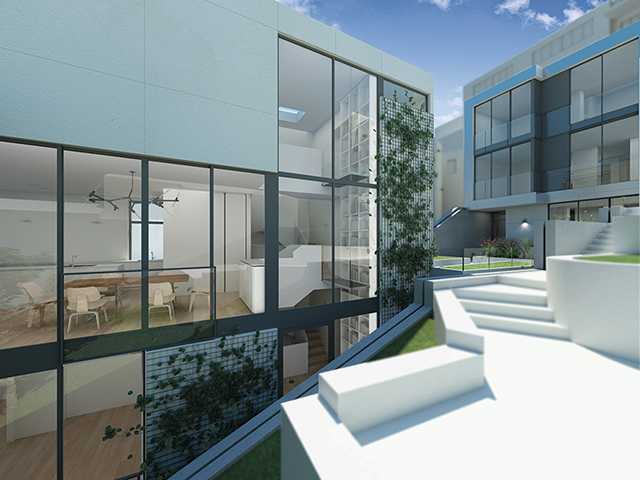 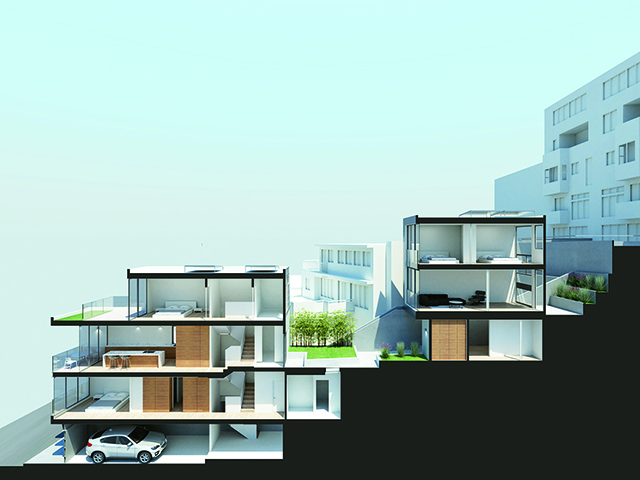 Working with clients who suddenly possess astounding wealth is interesting, to say the least. “I have clients who weren’t billionaires when I first worked with them but are now,” Jim says. “Some clients have built services that people use every day. People with new money want the best of everything and are a little know-it-all; they’ve researched products on the web. My old-money clients have more modest tastes.”

Not that they’re complaining. But both Lise and Jim would say that their best clients are themselves. “We have lived in three-quarters of the six spec projects we’ve done,” says Lise, who in addition to doing architecture, furniture design, and marketing, often designs the landscape and lighting on spec projects and works with stagers. “Not only is it a process we enjoy and that has brought revenue, but it’s also satisfying on a personal level. It gives us freedom to do what we want design-wise, and it informs client work.”

Ultimately, though, development depends on having the right financing. In a city where one needs $500,000 in cash just to get in the door, the firm is looking for deep-pocketed investors, which would allow them to take on more projects simultaneously. Meanwhile, Lise and Jim live in a remodeled house on more than a quarter-acre in Glen Park where they plan to add a second house à la Steelhouse and GrandView. “We’re trying to create this urban infill,” she says. “We have a density problem, so we have an opportunity to make a difference.” 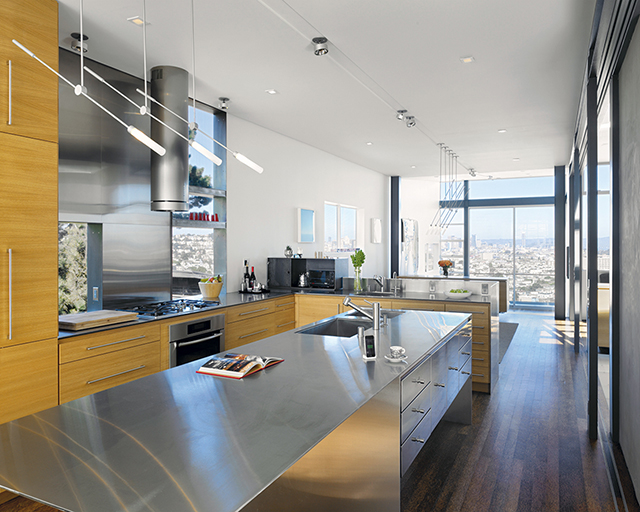 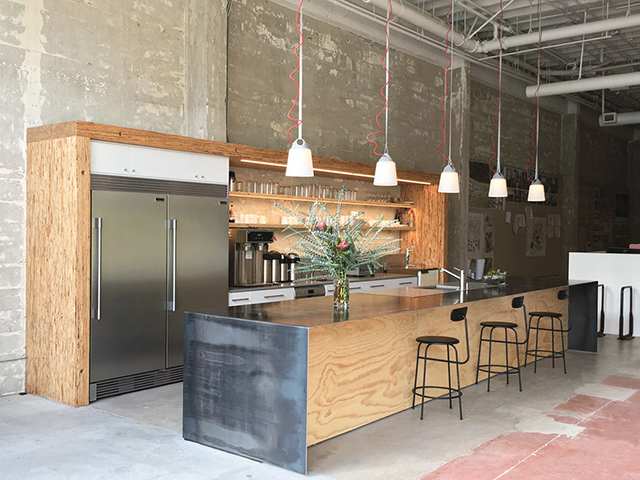 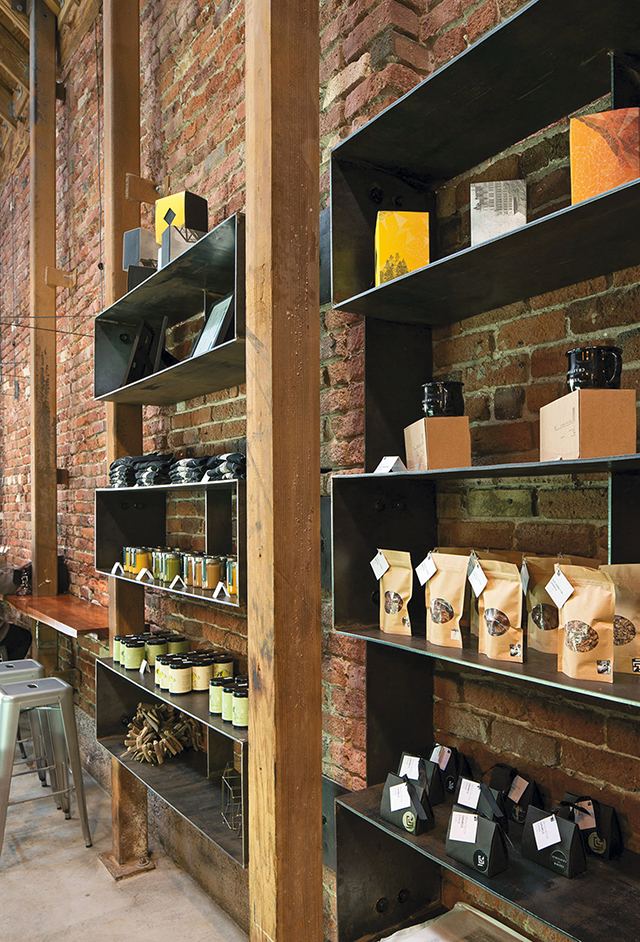 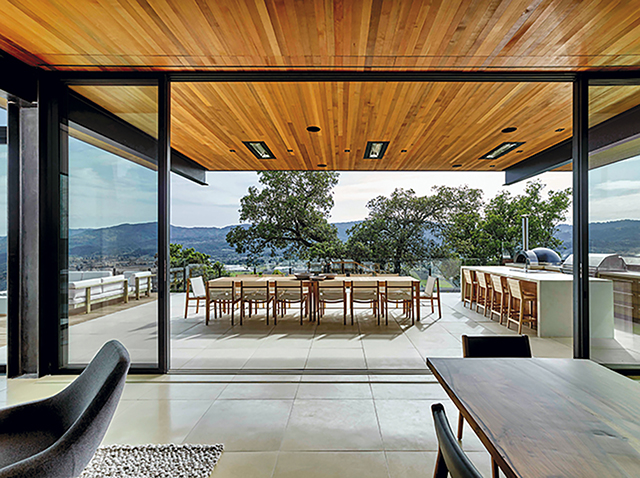 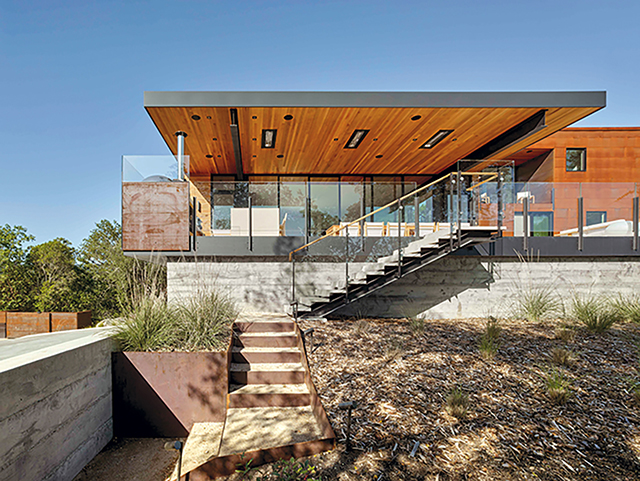 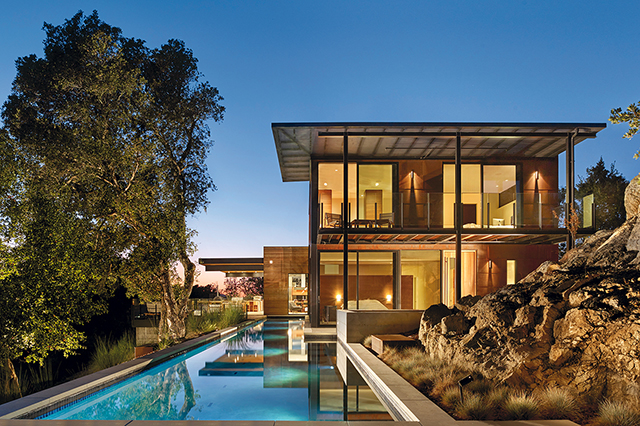 AIA: Nonresidential Spending to Grow Through 2020