Two years ago, an especially bad storm swept through Sarasota, Florida, which is no stranger to severe weather. Architect Michael Halflants, who does not live in a house of his own design, called up a former client and asked if he could bring his family over to ride it out. The house and its occupants made it through unscathed.

Michael is a partner in the design/build firm Halflants + Pichette Studio and also an associate professor of architecture at the University of South Florida, Tampa, where he leads the housing studio and teaches seminars in tropical architecture. He knows a thing or two about designing for the demanding climate in coastal Florida.

Originally from Belgium, Michael received his master’s degree in architecture from the University of Florida. He teamed up with architect John Pichette during the go-go days of the housing boom. “We each had independent, budding practices,” Michael recalls. “And he had more work than I did, so he asked me whether I’d be interested in joining him. That was back in 2006 at the top of the market—great times; everyone was busy. Six months into the practice, everything went down. We turned to design/build to survive the recession.”

John’s previous experience as a project manager for a firm that designed large commercial buildings helped him breeze through his contractor’s license. “John is on the tail end, and I’m on the front end,” says Michael, who leads the design work.

But what began as a survival strategy more than a decade ago has become the firm’s core approach to practice. “The argument we make to clients is, no one will care as much about executing the design as we do,” Michael explains. “And it’s true. We’ve become better architects because the drawings have to be done directly for subcontractors. It’s a far less cumbersome process, as well. Instead of a sub talking to the contractor and then the contractor calling the architect, we have the architect directly on-site, answering questions as they come up—and giving the right answer. And it’s absolutely true that it lowers our liability risk overall.”

Currently, the firm’s portfolio is a mix of single-family custom residential and multifamily design. On the custom projects, the firm is almost always the builder, too. “We work with other builders, but our preferred way is to do both the design and build,” says Michael.

Business is good again in South Florida, but the biggest boom is in multifamily projects. In fact, for Halflants + Pichette, the ratio of residential building types has flipped from 80 percent single family to 80 percent multifamily. So they’d like to take on more scope for the multifamily projects—as builder and, ultimately, as developer, too.

As of yet, they haven’t managed to break through on the contractor side of the multifamily business. It’s difficult to make the leap into larger projects when bank funding is needed. And that’s galling to Michael, who knows they can handle the work better than many contractors who win the job. “It’s difficult to convince banks and the owners that we can do it,” he says. “We almost built a project that would have been six townhouses, but we gave a realistic construction time of nine months to the owner and he said no. Of course, now the chosen builder is at nine months and only a quarter through the job.”

The solution? Develop their own projects. The firm recently picked up a desirable parcel of land and plans to do just that. Michael and John are talking with investors, but they have every intention of leading the design decisions and directing construction. “The property is on the main street in Sarasota, next to a new roundabout that I knew would change the nature of the street,” Michael explains. “There’s a bayfront park across the street from the parcel. I would drive by it on the way to work and realized it would be a good purchase. What we have in mind is fairly ambitious: 20 units over retail. The plan is to keep the retail long-term and sell the residential. The big opening of the building will face the park.”

Having designed quite a few multifamily projects for other owner/developers, the firm feels ready to take the next step. Michael and John are also interested in developing micro-units at some point. “But, as much as we’d like to do more speculative projects, we don’t want to put all our eggs in one basket,” Michael notes. 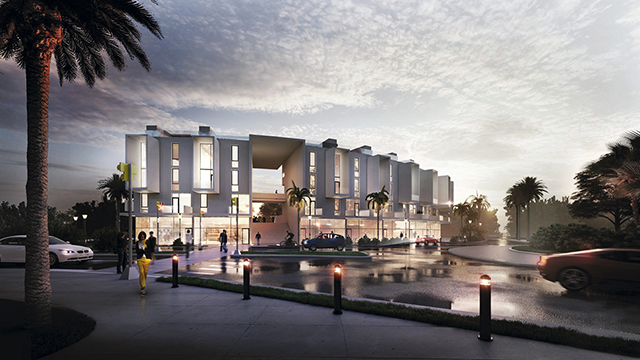 The Whitaker Lofts project marks the first foray into development for the architect-led design/build firm. The architects plan to sell the residential units and retain the retail long-term. Rendering: Halflants + Pichette

Designing for and against the climate in hot, humid, hurricane-prone Florida is an ongoing challenge for the firm, in both the single-family and multifamily projects. There are key similarities, though. First and foremost is to emphasize indoor/outdoor living. For the custom homes, that means houses that shade and protect exterior living space. And for the apartments, it means always designing into the plans at least a small sliver of balcony, terrace, or roof deck—not just for access to the outdoors, but to make the space feel and live larger overall.

“Modern architecture is not a style, it’s an attitude,” Michael observes. “It’s not about a flat roof, but about how you engage the site and make the most of its qualities and of the climate. We’re interested in making houses that invite you outdoors, that encourage you to walk inside through the outside. So, we always create a separate path outside into the house. We start with the exterior space and then wrap the house around it, shading it, protecting it. That makes for delightful living and a more efficient house.”

Stucco is the material of choice for its weather hardiness, but the firm likes to specify warmer woods in sheltered areas, such as soffits. And, although solar panels would seem a natural fit for Florida, Michael says the payback really isn’t there, given how cheap electricity is in his moderate region: “Our challenge is the moisture and humidity; it’s not difficult to achieve the temperature differential we need to go from 92 to 72 degrees.

“In the end, sustainability is about creating places people really enjoy,” he concludes. “Because they will want to maintain it for the long term. Places like the Umbrella House by Paul Rudolph, with that great roof that extends well beyond the house. That’s where everyone wants to congregate.” 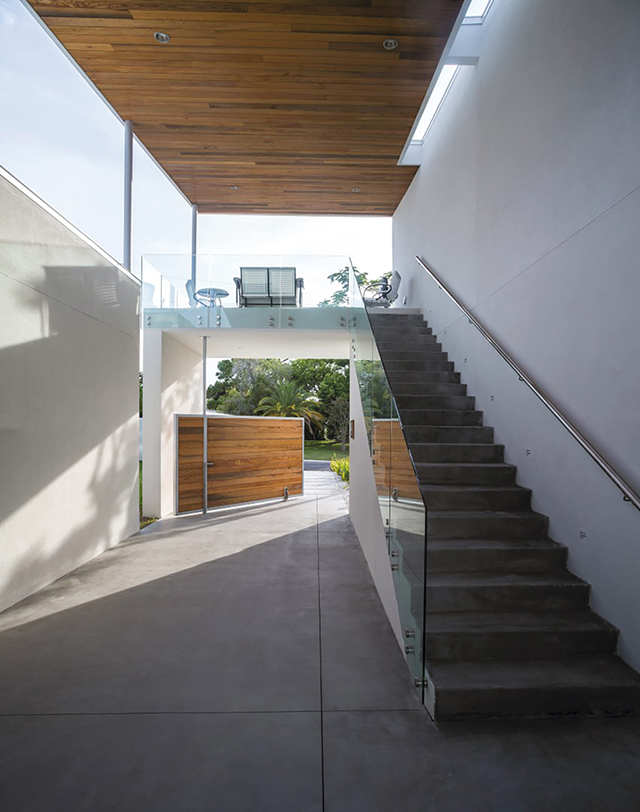 Above: In the design/build Philippi Creek Residence as second-story platform frames spectacular sunsets. 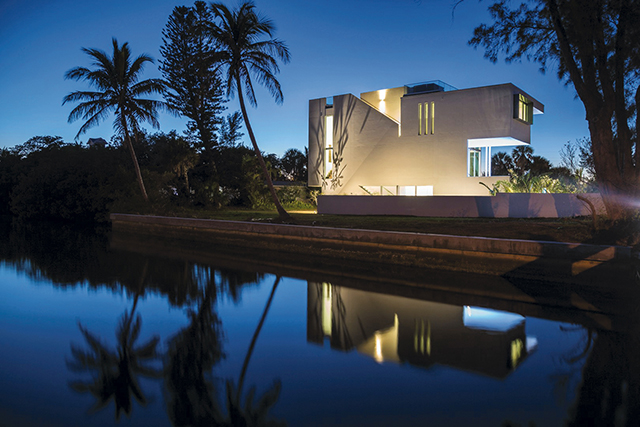 Above and below: Located in a floodplain and across from a public beach, the Anna Maria Residence is raised a full story off the ground. A series of tiered, protected outdoor areas brings it gently back down to earth. 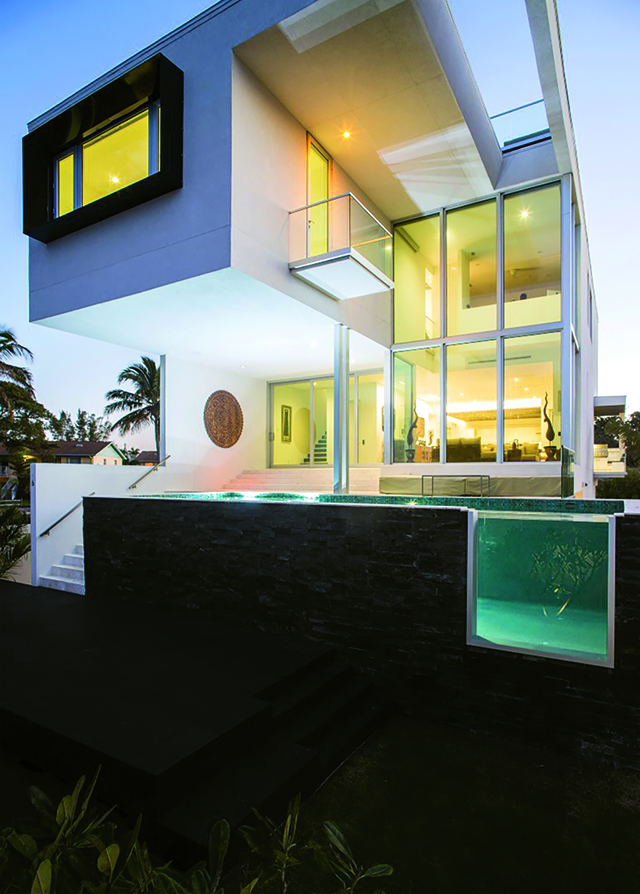 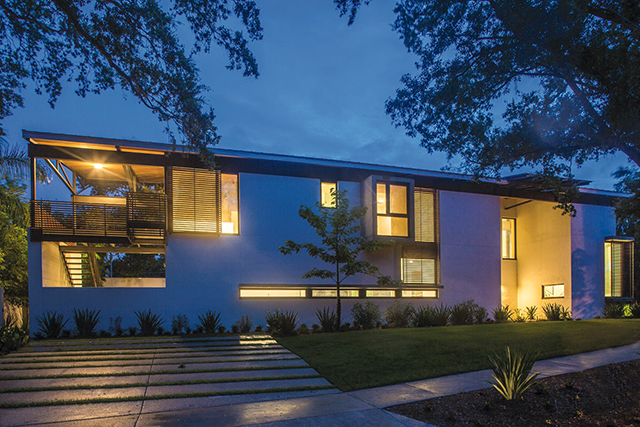 Above and below: Custom steel trusses suspend a balcony in the design/build Seminole Residence. Generous overhangs and a courtyard plan create a protected microclimate for outdoor living. 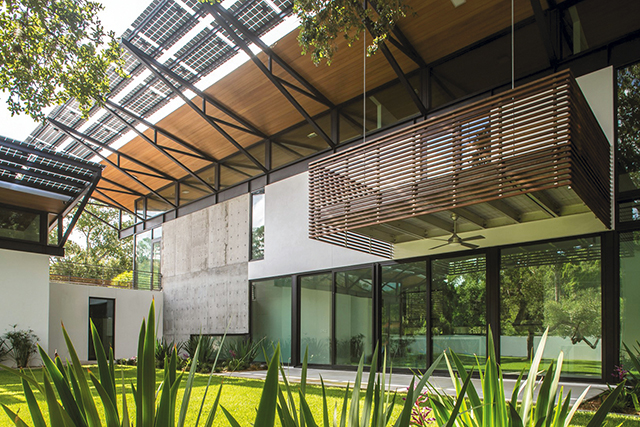 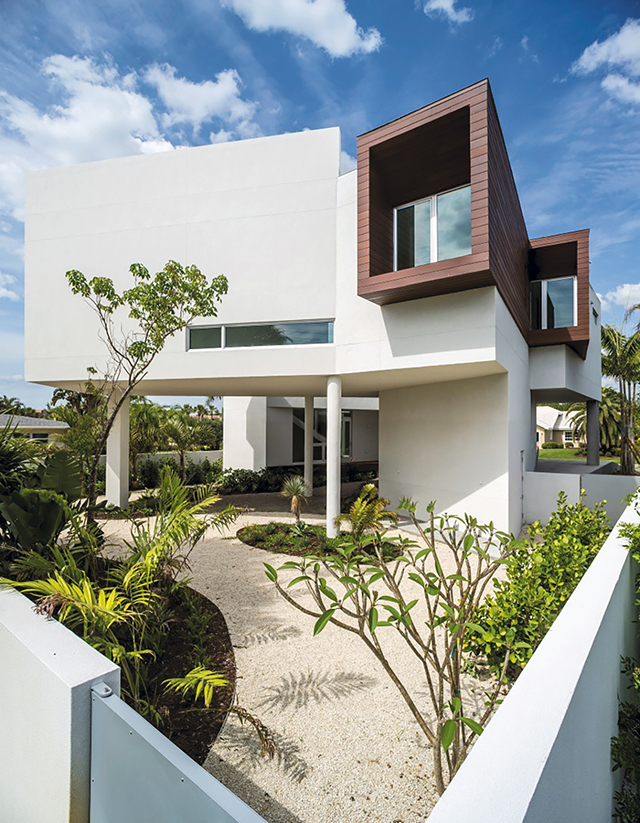 Above and below: On a tight site one house away from the Gulf of Mexico, the design/build Guberman-Kennedy Residence splits the program into wings and elevates main living to tap corridor views of the water. 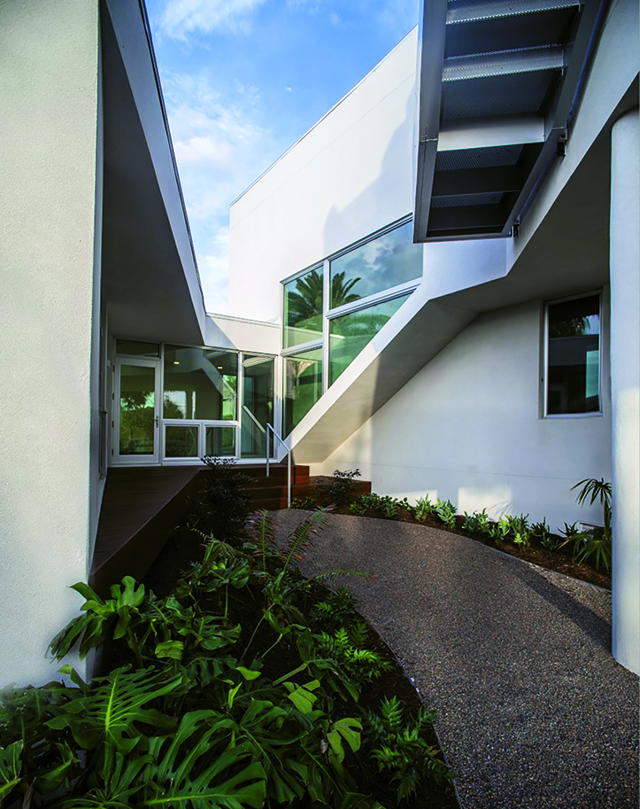