By S. Claire Conroy
May 4, 2017
Will Alphin is rebooting his company’s identity from Alphin Design Build to ”re.design.build.” Photo: Courtesy Re:Design.Build

Once upon a time, new companies branded themselves after their founders. There was something solid and trustworthy about a real, accountable person standing behind a product or service. Architects especially were fond of this approach, as it expedited the process of becoming a starchitect. (“My firm c’est moi,” no matter how many young associate architects and designers contributed to the achievements, was the attitude.) Today’s younger firms are moving away from the cult of the individual and the grab for authorship and toward names that reflect values, culture, and collaboration.

When Will Alphin founded his design/build company in his hometown of Raleigh, N.C., more than 20 years ago, he followed the well-worn course and named his fledgling company Alphin Design Build. As the firm matured and accumulated awards for its achievements in design and construction, Will and his namesake firm grew inextricably entwined.Or so it seemed. This year, Will took the highly unusual tack of rebooting and rebranding his now venerable company. The new name? “re.design.build.”

Twenty years building a reputation, only to start again from scratch? Why would a company choose to do this? “Maybeit’s a big mistake. But I feel like a weight was lifted off my shoulders,” says Will. “I didn’t have qualms. I actually feel freer now to promote the company. I never had an Instagram account for the company before, I had a personal one. I’m in the background a little bit more. I think we can still do great work, and maybe even better work.”

Will started in the business as many builders do by working with his hands. He worked summers and holidays during school as a finish carpenter in a furniture shop and for a local remodeler. School was North Carolina State, where he earned a Bachelor’s Degree in Environmental Design in Architecture (BEDA). When he graduated in 1989, he says, “it was not an era known for sustainable design and protecting the environment. But I was real interested in that. So, I looked for someone who had that as a mission.”

Reuse and Renew
After five or so years of apprenticeship, Will felt ready to go out on his own: “I bought a used pickup truck and a new saw.” His hometown of Raleigh grew alongside his company, and clients developed a taste for houses that treat the environment with consideration. Will’s inclination toward sustainable design solidified into a philosophy and a defined approach.

“We only do infill houses,” he states. “And some commercial and restaurant work. It’s about not feeding sprawl.” The company will renovate when possible, or rebuild if necessary. But don’t call those rebuilds “tear downs.” “We dismantle and donate,” he explains. “We wouldn’t tear down a house and put it in a landfill.” Habitat for Humanity is the go-to partner for the dismantling jobs, relying on volunteers to take everything apart and catalogue. “Then there’s a tax-deductible donation to Habitat.”

Determining which houses stay and which go is a delicate calculus. “It’s better to reuse things, is my mind set. It’s a hard equation, and one that has to be done for each property,” he says. And this is how he explains it to his clients: “Especially because we’re designers, yes, we could build you a new house from the ground up. So, if it’s the character you love, we should probably work to preserve the old house. But if you love it only for the location, trees, and the drive to work, maybe it’s not worth saving.”

Redesign and Rebuild
Will’s BEDA is what N.C. State calls a four-year “pre-professional” degree. To become a licensed architect in North Carolina, he was required to complete a fifth-year Bachelor of Architecture degree, intern with an architecture firm, and then pass the Architect Registration Examination. He went to work in construction instead and earned his general contractor’s license.

“In North Carolina, you can do residential work without being a licensed architect, if you have your G.C. license. If you’re building something described in the code, a building inspector can approve it. Otherwise, you need a structural engineer to consult. It’s an agrarian state, and itstems from the idea that a farmer could build his own house or his own barn,” says Will.

His company builds for architects and also designs the work they build. He’s careful to parse the pluses and minuses of both arrangements, but concludes that design/build is often the better delivery method for most residential work. “I’m not trying to diminish the traditional equation of architect and builder,” he says. “But the good thing about design/build is that we control the conversation. There’s no builder saying it was the architect’s fault, and no architect saying it’s the builder’s fault. With the good intentions of treating our clients well, we can have good conversations, effectively, and there are no parties involved adding tension and stress.”

It’s also a better way to earn a living, he points out, and offers better value to the client. “All architects who practice architecture with a capital “A” have to supplement their income—by building, teaching, etc. We make a few bucks with design, but it’s the construction that keeps the doors open.”

Perhaps it’s not as lucrative as construction, but the company’s design work has certainly earned its share of accolades. A recent project, 123 Hillcrest, won top honors in the 2016 George Matsumoto Prize competition, run by North Carolina Modernist Houses, a nonprofit “archive documenting, preserving, and promoting residential modernist architecture.” The Hillcrest project won both 1st place in the juried awards and 2nd place in the “People’s Choice” portion of the competition. The house was also included on the juried AIA Triangle Tour of Residential Architecture. There have been other awards as well, as designer and builder and as design/builder. 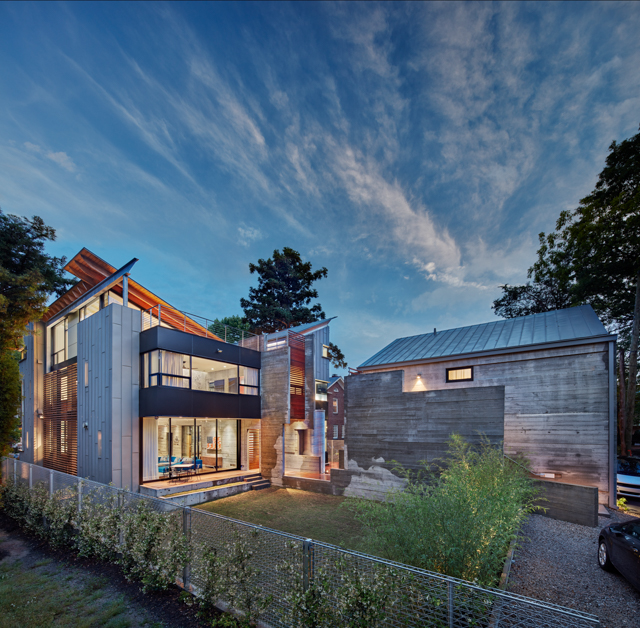 Remodel and Relearn
Despite the modernist honors, Will’s company does not confine itself to contemporary work. That would be tough to do, given a devotion to rehabbing existing structures. Working on the older houses has been like a graduate program in design and construction, he says, giving him a sincere appreciation for the designers and builders who’ve come before him. “We’ve worked on just about every type of building and every era of construction. I feel like I’m pretty deep in my understanding from that,” he explains. “I think it’s fun as a designer to learn a new language. To say, let’s look at this house—what are the overhangs like, what is the scale of the wings, what is the language of the house? How would it like to be added on to?”

That doesn’t mean the right choice is always to follow the style of the original, he adds. “Sometimes the best way to honor a house is to make sure the addition contrasts with it.”

Asked if he has a preference for modern or traditional, he demurs a bit. “Here’s my elevator speech on that: If we’re doing work on new houses, we feel we should be working in this time period. It doesn’t feel genuine not to. But if we’re doing additions or working on an existing building, we’ve done it both ways—adopt the language or depart from the language. If we adopt the language, the finished product is something no one could tell we’ve added on to.”

Rethink and Rename
Turning 50 is a good time for a big think. What’s next starts to loom large, even if lies in the distant future. For business owners, the important questions are how do you continue to build value in your company and how do you make that value transferable? Part of the answer may lie in detaching the product from the person. Hence, “re.design.build.”

According to Will, the change allowed him to acknowledge the collaborative team that the company has become over the years. There are more than a dozen on staff; several have been there for more than a decade. “It was starting to feel disingenuous just to have me on the banner. It isn’t just about me; we have really great people who do very good work. Taking my name off the banner changes the way clients look at us, too. It helps them feel like they’re hiring a company and not just a person.”

Will worked with a college friend who’s a graphic designer to devise the new branding. “We wanted to have a name and a brand that’s customer friendly—a little bit fun but not too goofy. The name has built-in flexibility; it can even rebrand itself.”

What he didn’t do was restructure the company. “I researched it—the implications of restructuring on the insurance side, the accounting side—and it really felt like just changing the name was the way to go.” The company remains a sole-proprietor corporation.

But the rebranding extends all the way through the company—to work vehicles, T-shirts for those in the field, signs on site—all are emblazoned with “re.design. build” in “OSHA approved safety colors,” says Will.

When you call the company telephone, a recording explains the name change. When you Google it, the old name is the top hit but there’s a redirect to the new, snazzy website. The rework is still a work in progress. But, the times they are a-changin’.