When architects Victor Sidy and Nick Mancusi first walked this hillside site with their clients, the word that came to mind was “intimate.” Although it lies just a few miles west of downtown Tucson and within city limits, the land is virtually untouched desert, and a wash that runs down from the Tucson Mountains supports a lush ecosystem of animals and songbirds; saguaro, prickly pear, and cholla cactuses; and desert scrub. “There was an intimacy about the site that we felt was important to touch on in the design of the house,” says Victor.

The two architects first crossed paths at Taliesin, the Frank Lloyd Wright School of Architecture (now the School of Architecture at Taliesin), where Nick was a student and Victor was dean. Nick had just returned to Tucson to start a practice and Victor was finishing his tenure at Taliesin when the clients approached them, seeking an alternative to the typical stucco houses with tile roofs that fill the suburbs of desert cities. Retired Midwest transplants, the couple wanted something reminiscent of Frank Lloyd Wright. “We engaged them in a dialogue about Wright’s philosophy and began to steer them in a direction that questioned the essence of dwelling and the relationship to the site,” says Nick, “helping them look beyond preconceived notions of home.”

The design they worked out is a two-bedroom home that sits below the crown of a hill, sculpted along the rock contours and canted toward the mountains. Built on pilings cut into the rock, the house reaches into the natural hillside and then soars out over the desert, gazing toward the north. Low in profile and suffused with shifting light, its understated interiors and earthy language of steel and concrete eliminate mundane distractions.

It was always about the view. “Nick and I went to the property with the clients and sat on a part of the hill looking north,” Victor says. “The clients looked at each other and said, this is the spot, the view we want to look at for the rest of our lives.” That spot is now the neck between the parking area and the main house, a crucial hinge in the overall design. The house’s massing is minimized with a detached carport structure that contains the husband’s workshop on one side and the wife’s psychotherapy office and fitness room on the other. Visitors drive up the hill along the site wall, park, and are treated to the view as they walk toward the house. This arrangement also effectively keeps work and hobbies in one realm and domestic life in another.

Three months of initial site work culminated in a board-formed-concrete site wall and foundation walls, which add a heavy anchoring element that’s beautiful but was labor-intensive to build. Constructing a site wall—the only part of the project with conventional footings—was the easiest way to minimize cut and fill in this delicate ecosystem. The house itself is doweled directly into the rock, or as builder Page Repp puts it, “The whole structure is epoxied into the mountain.” The bar-shaped spatial sequence moves from the slab-on-grade bedrooms and study to the cantilevered kitchen and living area, which is built with steel beams and B-decking on concrete. The overhang rests on the front site wall, sailing about 17 feet beyond it.

A high floor plate and the natural hill created room for a partial basement/storage area under the main living space and the opportunity to connect the front and back terraces with an elegant walkway under the house. The basement excavation was the biggest construction challenge, Page says. “Chipping out rock is expensive; we did it minimally and maintained a tight footprint so the desert stays right up next to the house.” The plywood-formed basement walls are not typical in Arizona, he adds, but “we had an incredible concrete contract that priced out the same as masonry.”

Laying out the structural system on a grid of standard building-material dimensions also helped to pare down the budget. For example, the office, workshop, and carport are each 12 feet deep, and modules divisible by 12 determined their length. This allowed for conventional wood framing and 4×8 sheets of plywood. Likewise, the house is 24 feet wide, and its standard-dimension steelwork eliminated the need for a custom B-deck support system under the concrete flooring.

“The great thing was that the contractor was also an architect, and we had conversations about how to save costs on certain structural elements without sacrificing these dynamic movements,” says Nick. There’s a handy hierarchy at play, too. “The cantilevered living room is the most visible part,” Victor says. “Everything else is subservient to that, but it’s just steel beams running out, and everything is standard sizing. We didn’t need to do a lot of structural gymnastics.” Although, as Page points out, “we had to get scaffolding in to clad the cantilever.”

That modular logic drove the choice and placement of exterior elements, too, but with an imaginative twist.  Both musicians—Victor plays classical music, Nick contemporary—they set up a three-four rhythm with the windows and metal cladding. “We like to add a compositional element to the way everything comes together when the design is simple,” Victor says. “And the best way to understand that is its analog with music.” This three-unit-against-four-unit rhythm is especially evident on the west elevation, where the windows—a 12-foot ribbon here, a six-foot module there (multiples of three)—are set into cladding consisting of four-foot-wide, oiled steel panels that will rust gently with age. “The passage of time was something the clients really embraced,” Victor says. “As a psychotherapist, she loved the idea of seeing the building itself age as they grow older.”

There are other lyrical elements, too. Nick and Victor explored how the house might interact, consciously or subconsciously, with earth, fire, water, and air—the four elements. “Earth is a fairly visceral experience when you’re in the hill like that, and wind is typical of that part of the city,” Victor says. An entryway runnel that pours water into a pool at the lower terrace fulfills the need for water. And as for fire, the remnant masonry foundation of an old well became a pivot point for organizing the house. Now the centerpiece of the rear terrace, it is a fire pit formed from concrete and stone.

Even the house’s hardest edges took cues from the organic environment. To make the concrete site wall’s vertical expansion joints disappear, the architects used 2x6s to create rhythmic depressions that bounce in and out. “How do you celebrate the constructability of concrete?” asks Nick. “You don’t want a wall that seems monolithic but one that is growing out of the desert. When you look at the desert, it never has a straight, seamed line. We created this beautiful texture that plays with light and the romance of the desert, and the construction method was achieved without being too fussy.”

Says Victor, “Our hope was that there would be a resonance between the stairs and that vertical fluting, not isolated from one another but part of the same material expression.”

Ever attuned to its physical surroundings, the interior is a virtual blank canvas with white walls and polished concrete floors. Most of the glass is on the north and east, while the opaque south side plays defense against the persistent sun.

The alchemy between site and structure is in evidence every day. “It was a real joy to correspond with the clients after the house was built and to hear how delighted they are at twilight,” Victor says. “It’s always an event where the lights gradually turn on inside the house and the sun sets.”

“It’s a house of propositions,” adds Nick. “One can sit in the living room watching hawks soar across the desert, or be in the bedroom looking at layers of rock, or walk from the open-air court either through or under the house to the east terrace and fire pit—the idea being that the architecture helps one experience the beautiful Sonoran Desert in a multitude of unique ways while being sensitive to the desert ecology.” 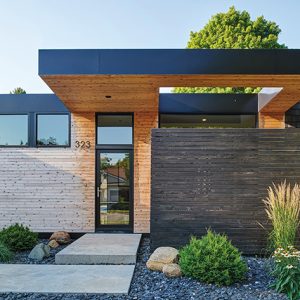 When Neumann Monson president Tim Schroeder, AIA, and his wife found themselves with an emptying nest, they decided it was time to move from the Iowa City suburbs to a closer-in, walkable... 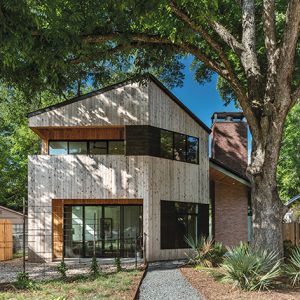 Urban houses need to respond to the warp and weft of their neighborhoods—the prevailing context and the conditions of their sites. In the case of this up-and-coming neighborhood in East Austin, Texas,... 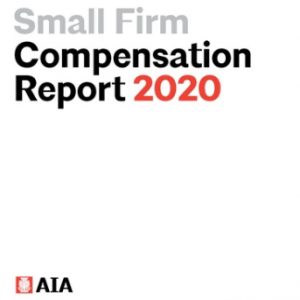 AIA Small Firm Compensation Report: How Much Should Your Small Firm Earn?

As a small firm practitioner, it’s hard to get a reality check on what you should be earning and how your firm stacks up against your peers. The AIA has just updated... 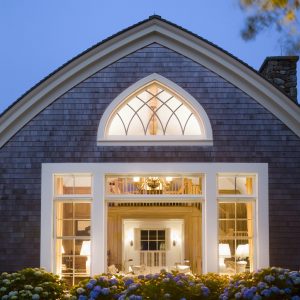 Houses by Robert A.M. Stern Architects Get Their Own Website

Long known for its high-end custom residential work, Robert A.M. Stern Architects has launched a dedicated website to highlight its extensive portfolio of exquisitely designed and crafted houses. In a press release...