Hither Hills in the Hamptons is known for its small, half-acre lots and hilly landscape of Russian olive, oak, shadbush, and pine trees. Once a getaway destination for middle-class families, the area’s modestly built cottages often responded to the views and gullies in offbeat ways. “It’s my favorite area in the Hamptons; growing up I spent a lot of time there,” says Paul Masi, AIA. “There are a lot of kit houses. My parents built one in the 1960s, and it’s still there.”

This house’s owners, Manhattanites, also felt the pull of the Zen-like landscape and asked Bates Masi + Architects to design a house on a steep lot they had found with views of the ocean. The budget was relatively small, as was the wish list, which included a pool and a desire to be outdoors as much as possible.

But with a grade rise of 20 feet from the road to the back of the lot, it lacked a level ground plane on which to build an easy indoor-outdoor relationship. “For us, the real challenge was navigating this piece of property,” Paul says. “It’s a pretty steep hill, and how do you spend time outside when you’re 10 feet in the air as soon as you open the door?”

Paul’s solution was to artfully insert five concrete retaining walls that step down the hill, organizing the views and allowing the house’s volumes to be nested into the hillside. Its six levels, including terraces, resulted in a series of destination points rather than one big open space. The interior rooms connect almost seamlessly to the outdoor decks, allowing the owners to “experience the hillside,” Paul says.

He drew an upside-down floor plan with the master suite and public areas at the top of the house. From the crushed bluestone parking court at the bottom of the lot, visitors are presented with a poetic pair of parallel staircases—one exterior and one interior, with a glass wall between them—sheltered by cantilevers and roof projections. Inside or out, both stairs lead up to the main entry at the kitchen, and the exterior stair continues to the pool deck at the back of the house. The ground floor contains three bedrooms, two baths, an office, lounge, mudroom, laundry, and storage. Beneath are a basement rec room, mechanical room, and storage. 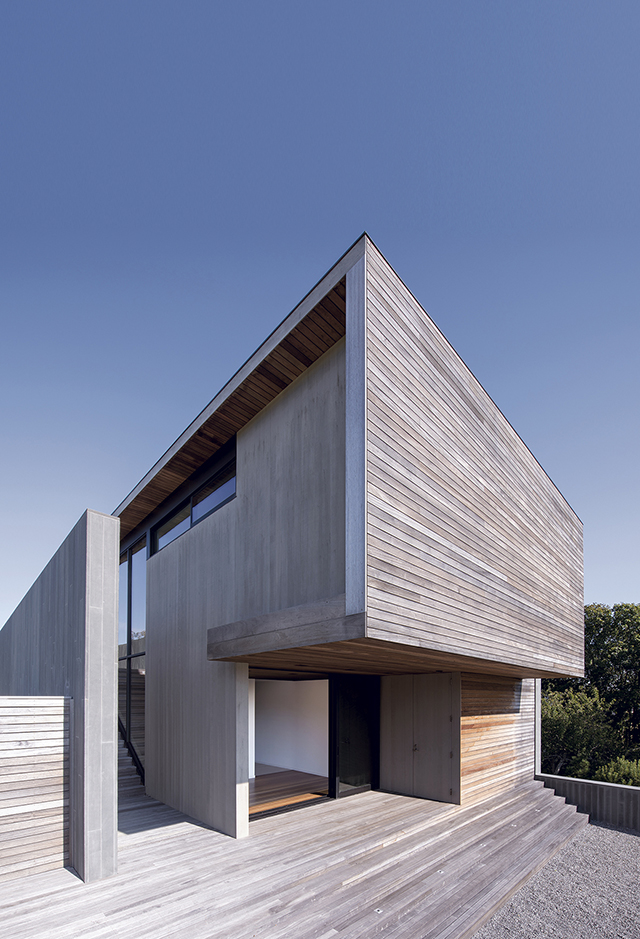 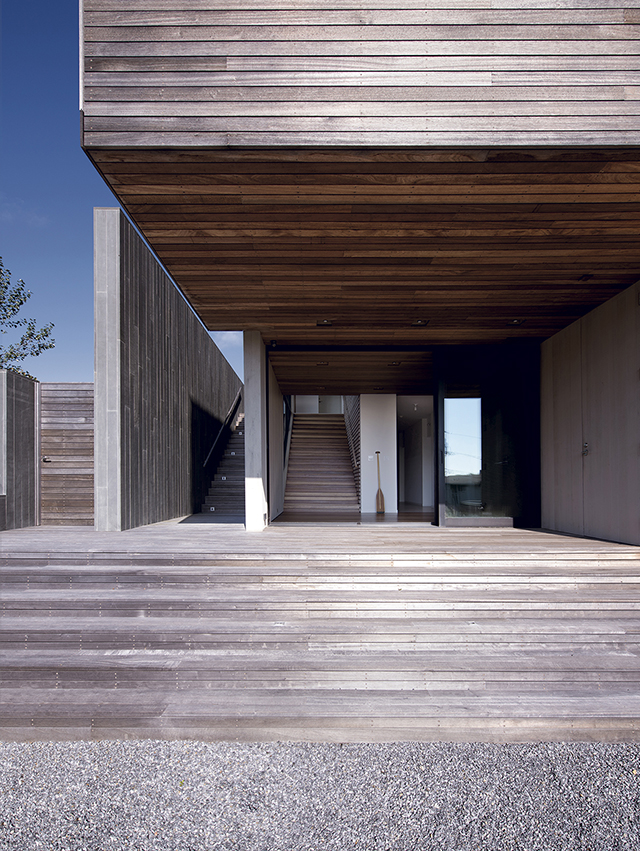 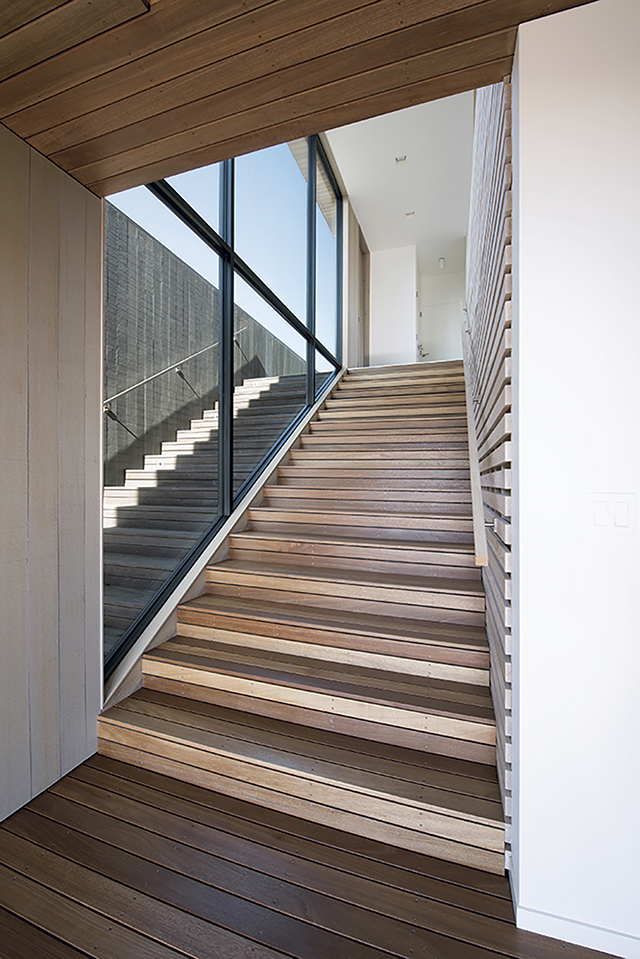 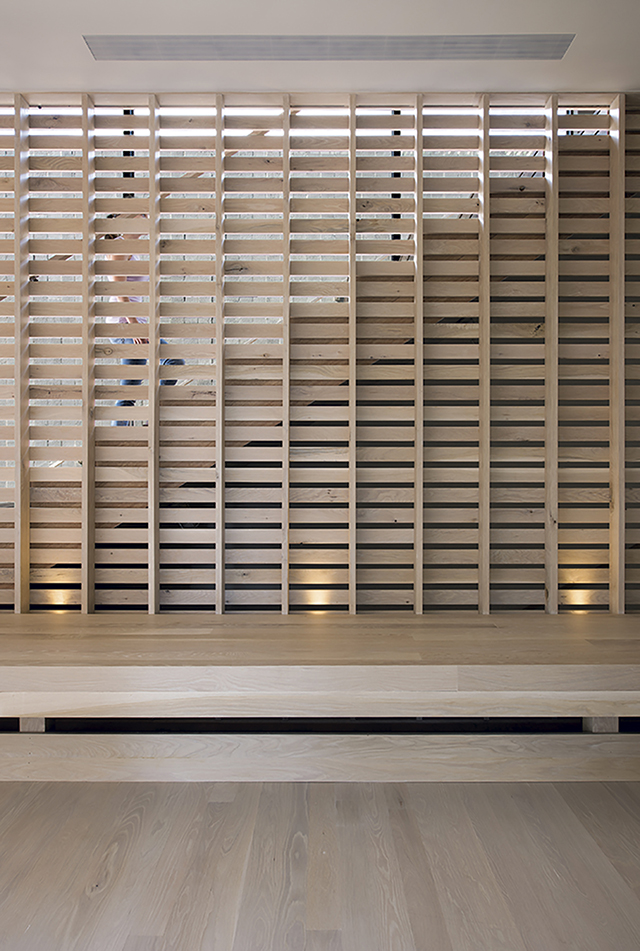 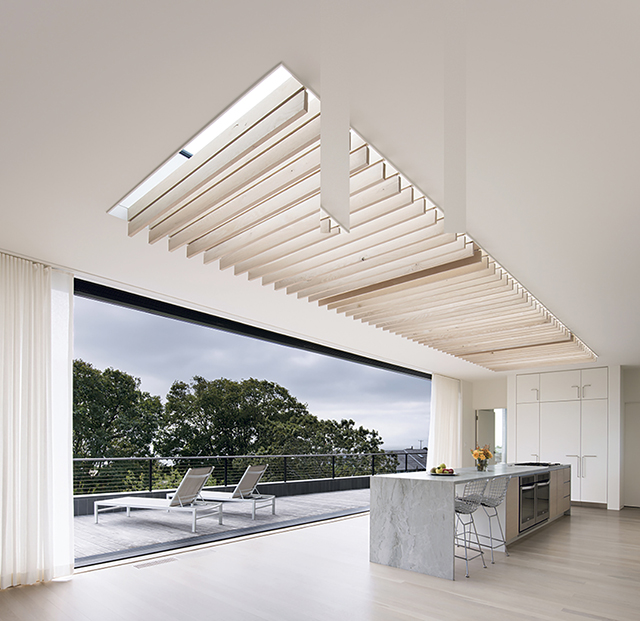 The bulk of the project’s budget was devoted to earthwork and site infrastructure to support this nested configuration. Site and foundation walls follow the land’s contours, which influenced the house’s geometries. “I always enjoy doing Paul’s houses because there are new elements, things we haven’t done before, and it’s thought-provoking to get them from paper to fruition,” says builder Keith Romeo. “It’s like a chess match, thinking a couple of steps ahead so you don’t get tripped up.” The biggest challenge, he says, was to get all the foundation and retaining walls in first and then frame the house around them. For example, the foundation wall on the north side, at the back of the house, is 20 feet deep to accommodate the basement under the ground-level guest rooms. “Because of the depth of that foundation, it was a nerve-wracking pour,” Paul says. All of the retaining walls are connected to decks and tied back to the house. They are clad and capped with bluestone from a local stone yard, and the joints run vertically, expressing their insertion deep into the earth.

Once the house was in place, Romeo pulled the dimensions to build the pool, which sits at the property’s highest point with views of the ocean. Whereas the concrete for the foundation work was pumped in from a truck near the road, the pool construction involved laying a temporary driveway for cement trucks on the south side.

Not that this almost inevitable-seeming scheme was initially evident to the untrained eye. Keith’s first impression of the lot was that he could not see the trees for the forest. The overgrown land contained an existing house that was beyond repair and buried in the woods. “One of Paul’s greatest assets is that he was able to see this property in the wood,” he says. “Once we cleared the lot, it revealed that this house was site-specific, but it was difficult to see at first. Those angles, and the way it sits on the contours of the existing property—we didn’t have to regrade.”

However, some of the resources saved by not having to move mountains of dirt went into digging down 80 feet to find sand on which to place the septic system. The municipality requires excavating all the clay, and “we had to bring a clamshell in so we could go straight down,” Keith says. “Normally on Long Island we can get sand six or eight feet down. When you’re digging an 80-foot hole, you don’t want to stand near the edge because you can’t see the bottom!” 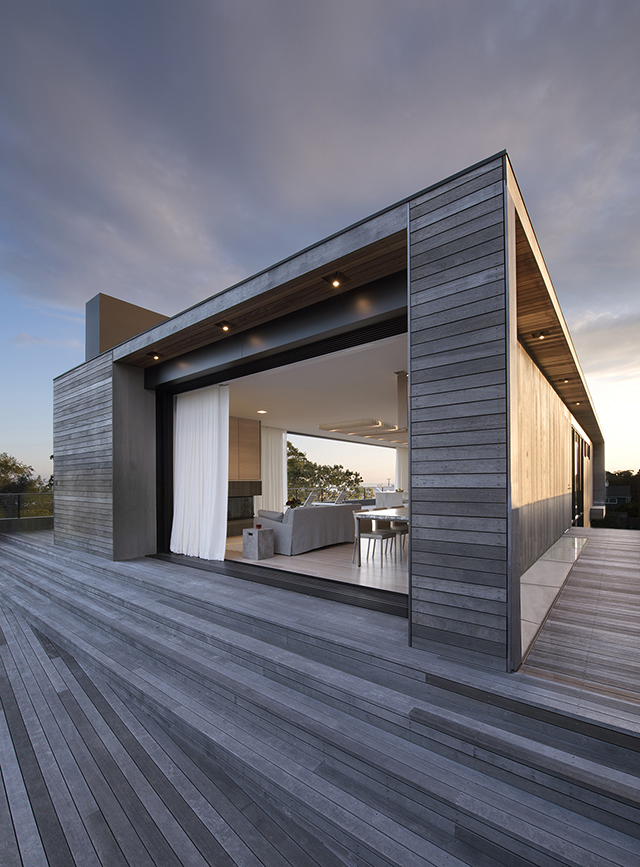 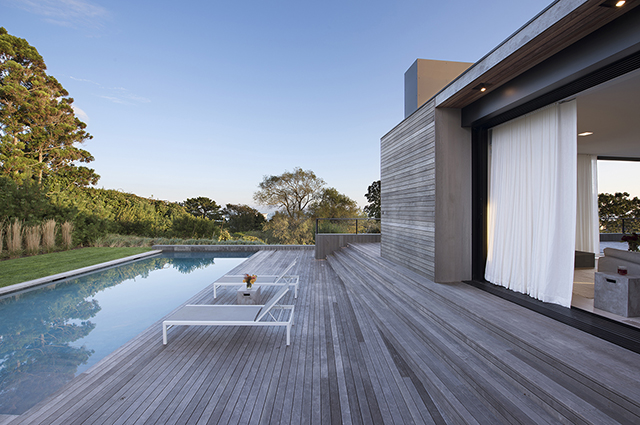 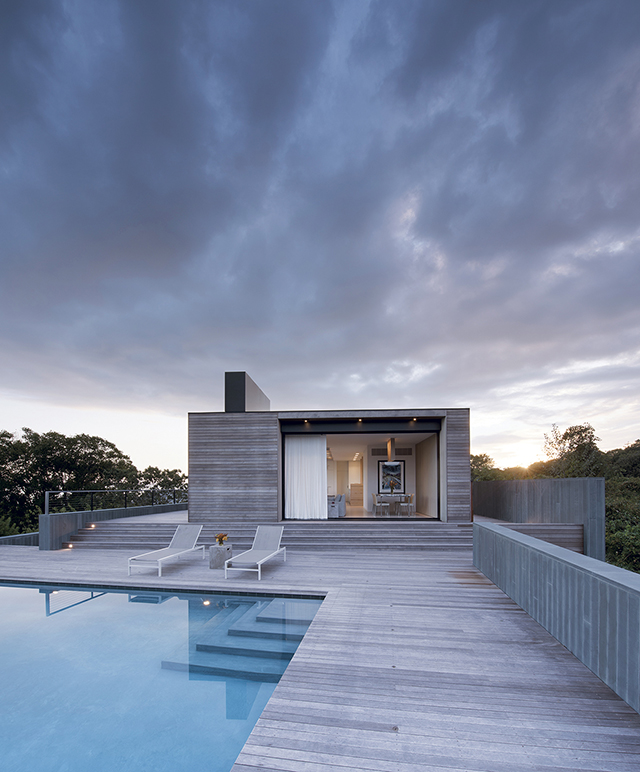 The sense of being on the ocean is palpable. Paul chose an earthy yet refined palette of materials that records the effects of nature and blends with the landscape. Weathered horizontal mahogany decking spans between the bluestone walls—a counterpoint to the vertically run bluestone—and covers the underside of roof overhangs, the stairs, and the exterior walls, while oak warms the interior floors and ceilings. Like the bluestone, all of the wood was sourced locally.

The pale, calm interiors bear some of the quietly ingenious design moves that Paul is known for. Lightweight white curtains register the movement of sunlight and air, rendering the intangible tangible. “We talked about how windy it is there,” he says. “We used a lot of hidden roll-down shades, but we wanted to put curtains that flutter in the wind on the large sliding doors” off the kitchen and dining room. The wind “is something that’s unseen but part of the experience.”

In another nod to the elements, wooden louvers hang on canvas hinges under an oversized skylight that stretches across the kitchen ceiling. The louvers sway in the ocean breezes, casting dynamic patterns of light and providing shade much like a tree’s canopy. An elongated variation of those louvers forms a beach-appropriate chandelier under lighting at the dining room table. And large, flat skylights sit flush with the deck outside the dining area, brightening the office and lounge below.

Structural gymnastics notwithstanding, the building is simple but leaves nothing to be desired. “In a lot of architecture, the experience is made by the materials, details, form, and geometry,” Paul says. “I feel like this experience is more about the space planning and capturing the views, and these terraced outdoor spaces. What I like about it is the subtle way the architecture reads, but that the experience is more about being there. Some of our projects are more expressive than others, but this one wasn’t. We used American Olean tile and American Standard fixtures—not trying to be exotic for exotic’s sake.” After all, a house with an emotional relationship to the beach is its own luxury, and this one is about more than meets the eye. 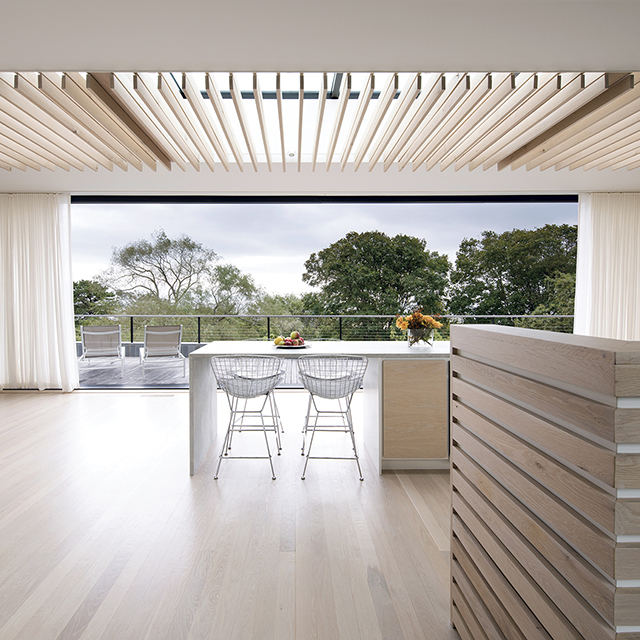 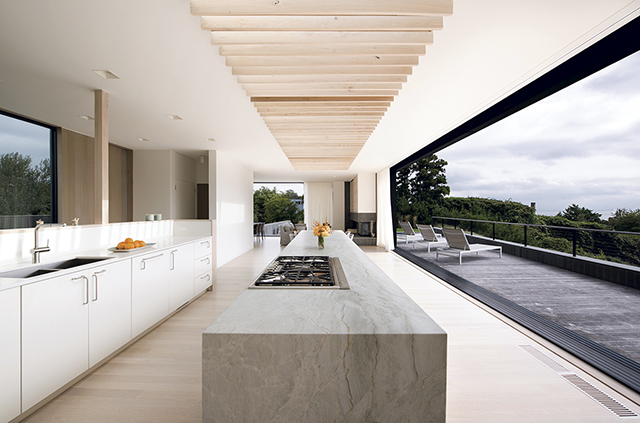 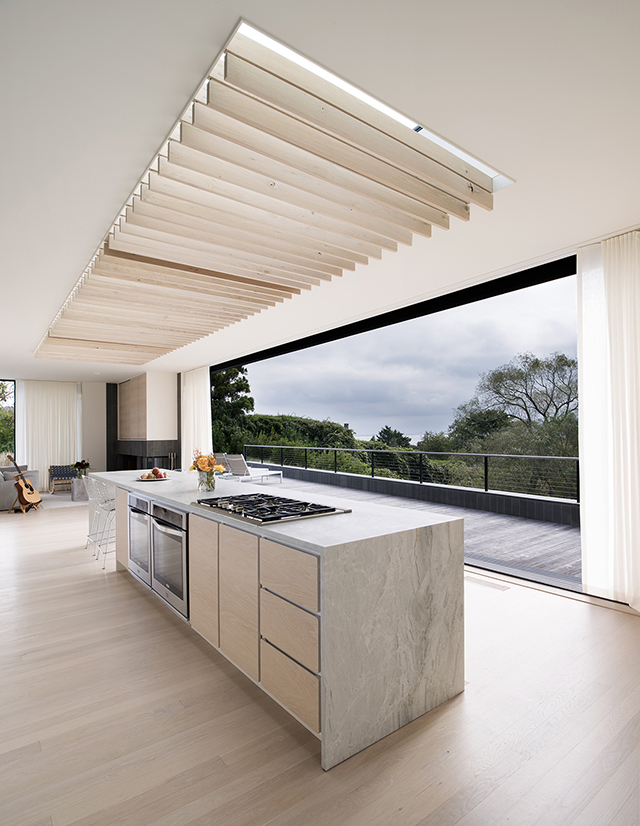 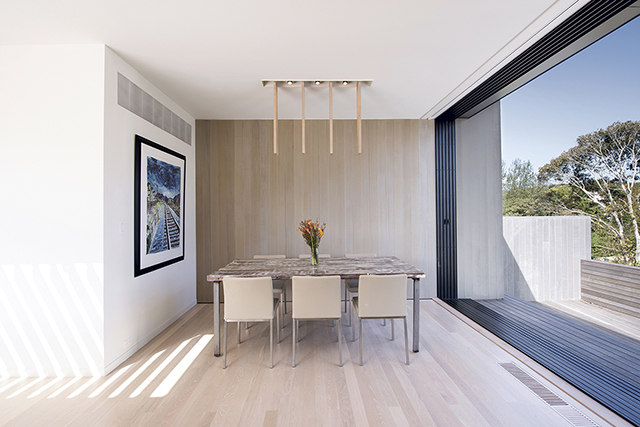 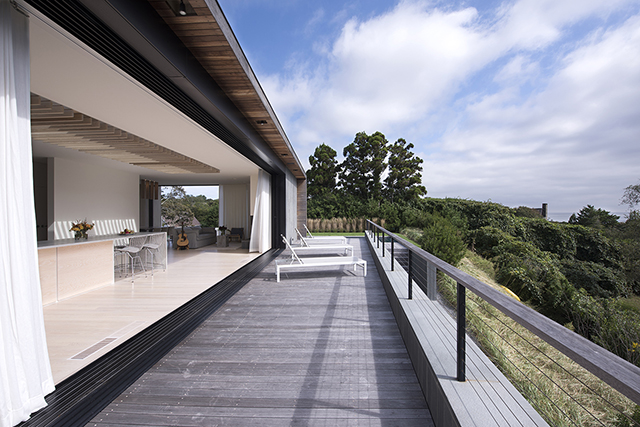 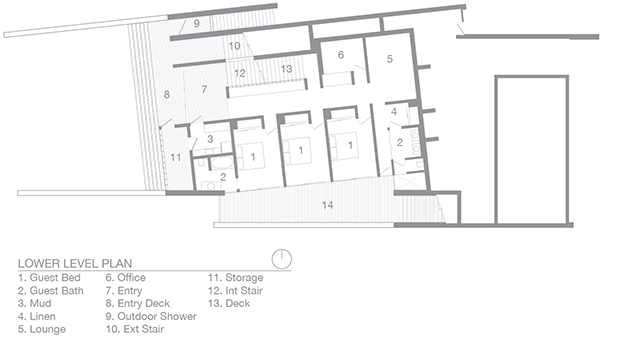 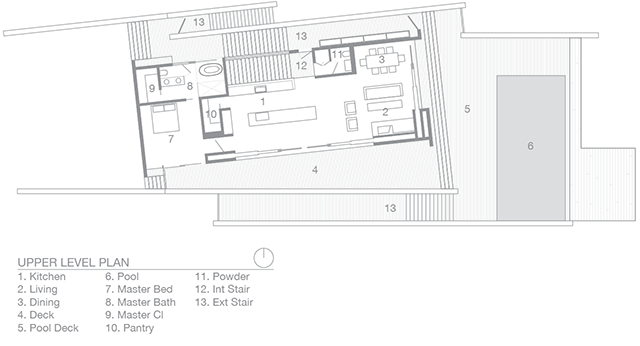 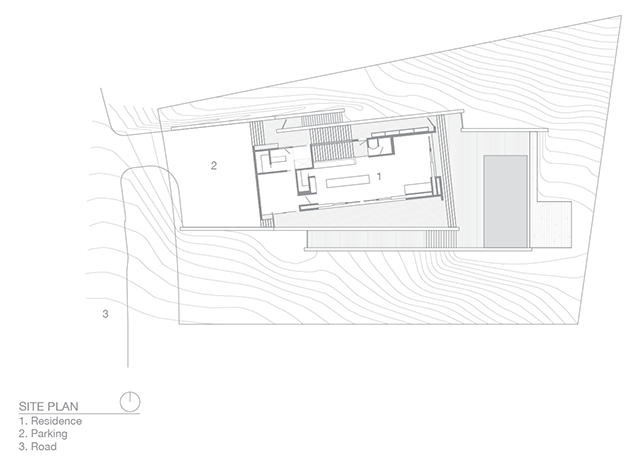