Home » Design in the Desert: The AIA CRAN Symposium Wrap-Up

Design in the Desert: The AIA CRAN Symposium Wrap-Up

For those living outside of the Southwest, the first thought about Phoenix is the heat; and it seems almost unimaginable that anyone would choose to live in a desert environment nicknamed “The Valley of the Sun.” Still, it’s the fifth most populous city in the U.S. and among the fastest growing, asserting the city and its surrounding communities are desirable places to call home. From the region’s earliest days of western settlement, the stark contrast between harsh summer heat and cool winter months has inspired an experimental quality in the local architecture. How fitting, then, that the AIA Custom Residential Architects Network (CRAN), with its mission to exchange ideas among the residential design community, would choose Scottsdale, a vital part of the Phoenix phenomenon, as its 11th annual symposium venue this year.

After a welcome reception the evening before, the five-day symposium launched with a morning expedition to Arcosanti, 70 miles north of Phoenix. Now 50 years in the making, Paolo Soleri’s utopian community has an otherworldly character somewhere between a futuristic alien spaceship and ancient Roman ruins. A tour through the community revealed an architecture at times dated and at others timeless. Grand vaulted outdoor rooms, carefully placed pedestrian streets, and thoughtfully designed public and private spaces explored simple, yet effective methods of working with the environment to mitigate its impact and harness its power (a practice Soleri named “Arcology”). 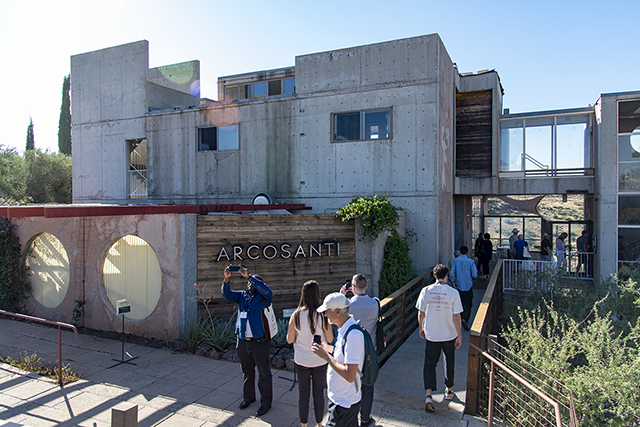 Above and below: AIA CRAN Symposium attendees at Arcosanti 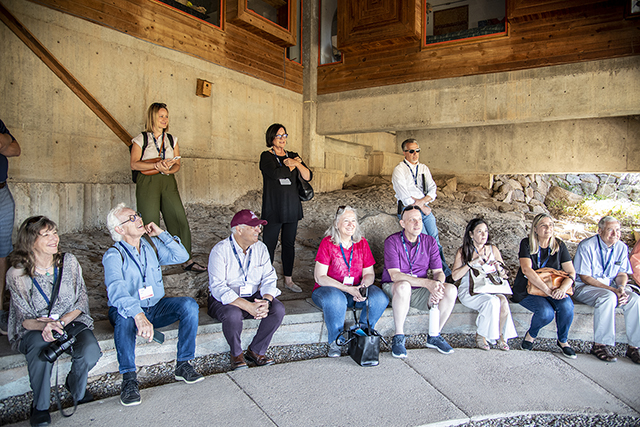 Upon our return to the Hotel Valley Ho, the venue for the educational sessions and vendor showcase, attendees settled in for the official conference kickoff by Mary Cerrone, AIA, this year’s CRAN chair. The hotel, once host to the Hollywood elite of the mid-century, has been recently enlarged and restored in a playful, mid-mod design conducive to moving among indoor and outdoor gathering spaces.

After Mary’s welcome remarks, architect Thamarit Suchart, AIA, presented the first educational session of the day. He explored the serenely beautiful work of Chen + Suchart, the studio he founded with his wife, Patricia Chen. Under their guidance, materials often considered utilitarian—concrete block, sheet metal, and unframed glass—become refined and elegant, with junctures so carefully detailed as to appear nearly seamless. Spaces, too, flow uninterrupted inside and outdoors.

Wellington Reiter, FAIA, followed with a sweeping overview of Phoenix and the efforts, spearheaded by Arizona State University, to provide a revitalized urban response to its rapid growth.

The next speaker, Jennifer Kretschmer, AIA, opened our eyes to the possibility (and growing probability) of the “virtual office,” where remote coworkers will nonetheless function in a cohesive, productive architectural practice. Using interactive polls throughout her presentation, she turned attendees into participants and demonstrated the power and adaptability of virtual interaction.

Interspersed throughout the symposium, attendees networked with CRAN sponsors in the showcase room. Each day wrapped up neatly with a cocktail hour, followed by an opportunity to mingle at smaller, sponsor-provided dinners.

The next day’s sessions began with historian Chris Wilson’s perspective on the regional influences of Southwestern architectural history. His talk traced the evolution in design from the truly historic Native and Hispanic responses to the natural environment, to early 20th-century historicist, Revival, and Beaux Arts interpretations of these traditions, and culminated in a discussion of the area’s regional modernism. In each of these stylistic periods, the common theme is tapping the benefits of climate-specific design.

Chris’ presentation was a perfect lead-in to the next talk by Cade Hayes and Jesús Robles on their poetic work at D.U.S.T. The two took turns leading the lecture—each presenting a different project and both humbly, but clearly, making the argument for an architecture attuned to all the senses. In their work, rammed-earth walls present a tactile as well as visual delight; charred cedar interiors create a memorably aromatic bedroom; a deeply sheltered living room offers a cool respite from the searing heat outside. Once again, they underlined that, in the hands of skilled architects, the seemingly harsh environment of the Desert Southwest offers more design opportunities than limitations.

In the following session, presented by Bill Aylor, AIA, of Lake/Flato Architects, we learned of the firm’s efforts to streamline production of houses through examination of process, product, and performance. Bill provided a frank assessment of their successes and failures as the firm strives to find a more efficient and affordable approach to delivering well-designed homes.

Next, a highly animated panel discussion ensued regarding the delicate balance among designer, contractor, and client. Building science guru Mark LaLiberte moderated the conversation among architects Wendell Burnette, FAIA, Bill Aylor, AIA, and Warren Lloyd, AIA, and their builder collaborators Andy Byrnes, AIA, Matt Risinger, and Brandon Leroy. Central to the discussion was the importance of an open, constructive conversation between parties. 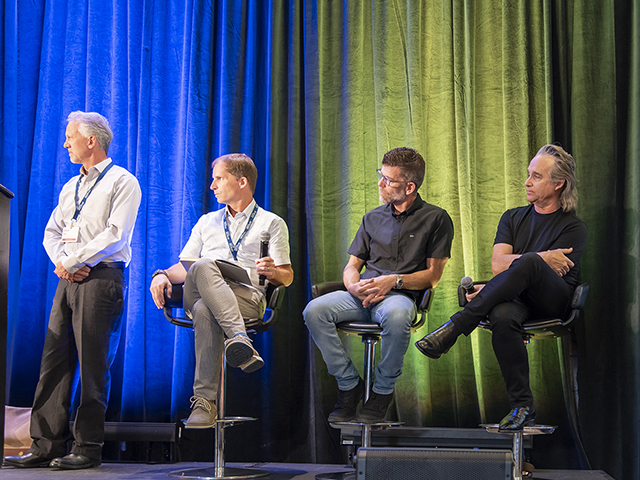 Left to right: Mark LaLiberte, Warren Lloyd, Andy Byrnes, and Wendell Burnette at the panel discussion on collaborating with clients, architects, and builders

Concluding the day’s sessions was a talk by plein-air landscape painter Joe Paquet, who spoke on the search for an authentic vision. Accompanied by images of his beautiful paintings, Joe detailed his personal journey to find his own voice within the creative act of painting, and the struggle to maintain its clarity amid the pressures of commercial success and worldly concerns.

The evening’s diversion was a cocktail reception and tour of Taliesin West, Frank Lloyd Wright’s winter home and school of architecture. The mid-century campus reveals much about the architect’s response to the Arizona environment, and how it influenced countless other responses that came after. A deep red, desert sunset made for a magical end to the day. 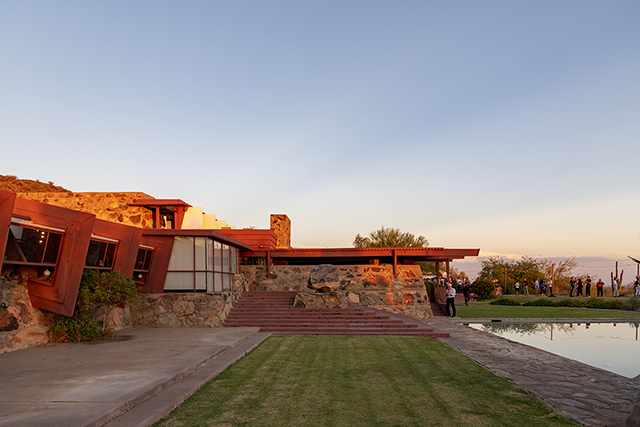 The penultimate conference day was devoted to the house tour. Three pairs of buses wove their way throughout the valley to explore six homes, with a midday stop for a civilized sit-down lunch and lecture at the Arizona Biltmore hotel.

Featured houses on the tour included the Lein Residence in Paradise Valley by Edward (Ned) B. Sawyer, designed in a deep brown brick to blend into the mountainside and with courtyards to bring light into the home’s interior. Its current owner, interior designer David Michael Miller, consulted the original architect before embarking on his thoughtful redesign.

The Driggs House, designed by Al Beadle 50 years ago, is unusual for the area with its black steel-grid design. A special highlight of our visit to the house was the presence of its original owner/client Gary Driggs and architect Ned Sawyer, who worked with Beadle. Gary, obviously proud of his home, explained that the design of the house is based on a series of squares —a 15-foot module. Deep overhangs shade the large glass openings connecting indoors and out. Five different kinds of concrete were used in the entry courtyard, and, according to Gary and Ned, the concrete block that clads the exterior was the first sandblasted block used in Arizona.

Designed by Frank Lloyd Wright, the 1955 Price House is the largest of the architect’s houses in Arizona. The home’s playful, colorful design modulates between interior and exterior spaces, courtyards, and patios. One of the favorite spaces for family gatherings was the central atrium with its fountain and large outdoor fireplace.

Wendell Burnette, FAIA, led the tour of his own residence, completed in 1995. The design is based on the “tatami mat of America,” he said—a 4-foot-by-8-foot dimension accentuated throughout the house. The structure and construction were complex, but the result is sophisticated and pure. Stairs that link the ground, main, and upper levels are open to the elements, ushering occupants and visitors through a curated experience of the home’s rugged desert environment.

The Johnson-Jones House, designed by Eddie Jones, AIA, of Jones Studio, for himself and his wife, Lisa, features rammed-earth walls that integrate the house with its site overlooking the vast South Mountain Preserve. A three-story glass façade opens the living room and lofted second floor to views of nature, while carefully avoiding glimpses of an adjacent water treatment tank.

The Cedar Street Residence by coLAB studio, llc, is a clever renovation and addition to a typical 1954 suburban home. Designed by husband-and-wife architects Matthew and Maria Salenger as their family home, the project entailed renovating the original streetside house into sleeping quarters and a playroom, and adding a new building at the rear for the kitchen, living, dining, and office areas. A courtyard, enclosed by translucent glass, spans the two buildings. Simple, economical materials and thoughtful design make this a very special home.

A lunchtime break at the Arizona Biltmore offered a self-guided tour, followed by a sit-down lunch and David Feasby’s interactive educational session, “Being Goal Driven Instead of Activity Directed.” After the conclusion of the house tour, attendees enjoyed another cocktail mix-and-mingle in the sponsor showcase, followed by dinners off-site.

On Sunday, the symposium wrapped up with a half day of programming. Lighting designer Ann Schiffers shared her wisdom about the design, health, and productivity ramifications of circadian lighting in the built environment.

Wendell Burnette gave the final keynote of the conference, outlining his design philosophy of “context as material.” His approach is characterized by mining poetic, climatic, and human resonances in his custom residential and resort design. Establishing deep, meaningful connections among materials, buildings, and humans to their environment is paramount in his work.

Whether deliberate or not, a theme emerged under the hot sun. Ironically in this bone-dry, desert climate, the theme is best summed up by the term “fluidity.” An easy flowing exchange of ideas and inspiration permeated the entire symposium, sending everyone home quenched and fortified for the coming year.