By The National Association of Home Builders
Dec 7, 2020

According to data from the Census Bureau’s Survey of Construction (SOC), the custom home share increased to 20.2 percent of all single-family homes started in 2019. Contractor-built or owner-built houses – that together make up the custom home market – are built one at a time for owner occupancy on owner’s land with either the owner or a builder acting as the general contractor. The alternative is homes built for sale, on the builder’s land, with the intention of selling the house and land in one transaction. 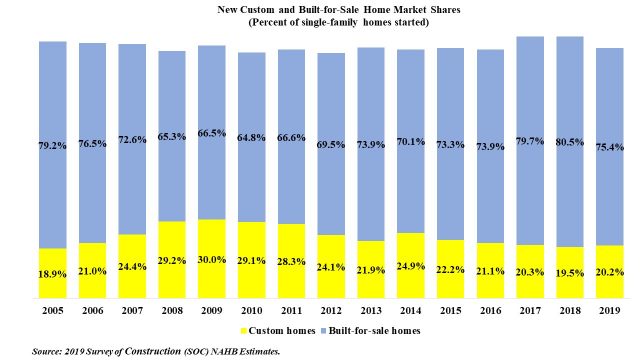 The annual increase in the custom home building is consistent with the slight increase the quarterly published statistics have shown. Although the quarterly statistics are more timely, they lack the geographic detail available in the annual data set.

When analyzed by the 9 census divisions, the annual data show that the highest custom home share in 2019 was 41.4 percent in the New England Division. In the South Atlantic Division, on the other hand, the share was only 13.2 percent.