Whether a work of architecture is about materiality, place, or creating an experience, finding a “way in” can mean taking inspiration from something very specific. In the case of Fold House, what appears to be the ultimate inert, low-maintenance machine was inspired by the almost primordial ecosystem of the Louisiana bottomland. Ironically, perhaps, this weather-shedding house finds common ground with the lush native life on its 15-acre parcel. And its perfectly smooth skin will patina to a soft gray, like the colors of the forest around it.

In scope and sensibility, this house is typical of the one or two residential projects Holly & Smith Architects takes on each year. Practicing in the South, where most people prefer a traditional, plantation-home vernacular, the firm’s modernist bent is best suited to the hospitality and higher-education sectors for which it is known. However, these clients, who are close friends of project architect Jeffrey Smith, AIA, approached him with a healthy budget and the desire to do something different.

The clients, empty nesters who had decamped from Louisiana to Santa Fe in recent years, were returning to home base to be near their children and grandchildren. The husband, Roy Dufreche, a landscape architect, also had a professional history with Holly & Smith, having designed the landscaping for most of the firm’s institutional and commercial work over two decades. So it was natural for Roy, Jeffrey, and design director Pierre Theriot, AIA, to walk the wooded land in anticipation of siting the house. They picked a spot on a high point overlooking a creek that feeds into the Natalbany River, and oriented the house to maximize the views and prevailing sun on the south. Its position also minimally disturbed the thick tree canopy of spruce and cypress, tupelos and oaks.

“Access to the site is a bit away from where the house is located,” says Jeffrey. “Roy came up with a circuitous route for the drive that winds through trees and captures a view of the house on approach.”

That view reveals a three-part house distinguished by its series of jauntily angled, folded metal roof planes. The main two-story volume contains the public spaces on the first floor and bedrooms and an office/lounge above. Glassy bridges—they float above the ground—connect it to a 750-square-foot garage on the north and a master suite on the south. This sprawling footprint not only softens the house by breaking up the geometries, it also expanded the canvas for showcasing the owners’ art collection. “One of the design partis I like to use is pods to disconnect different functional spaces if the site allows,” Jeffrey says. “We took advantage of that concept while creating a gallery bridge for artwork.”

It also lets the house interact with the landscape, Pierre says, and not just visually. “Bioswales under the bridges direct drainage around the house, because the house blocks drainage to the wetlands,” he says, adding that the roofs slope down toward the swales. Perhaps secondarily, the bridges are a bespoke buffer between the master suite and the grandchildren’s pajama parties, eliminating the need to stock up on earplugs to get a good night’s sleep. 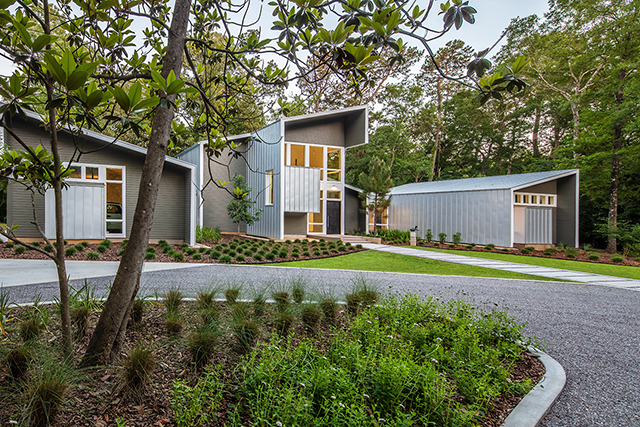 If architecture is personal, a continual interplay of creativity and reason, it was a singular reading of the land that spawned the building’s organizing form. Hiking the bottomland before design work commenced, the architects discovered a lot of “big, fat ancient vines” laddering up the trees. “They would crawl up a tree, fold down, and crawl up another limb, creating a folding appearance of vines running through the tree,” Jeffrey says. These folding patterns show up on the house, where standing-seam planes were creased to manipulate mass and form. They wrap around the three program pods, opening for access, views, and natural light.

“We simply took a plane, stuck it up vertically, folded it once at an angle to form the roof, then folded it again to create a vertical plane,” he says. “We get a lot of rain, so we extended the planes past the house to create porches, and overhangs at the windows.” Outside the TV room on the south, the roof folds down to the ground but is carved away to accommodate a bank of windows. 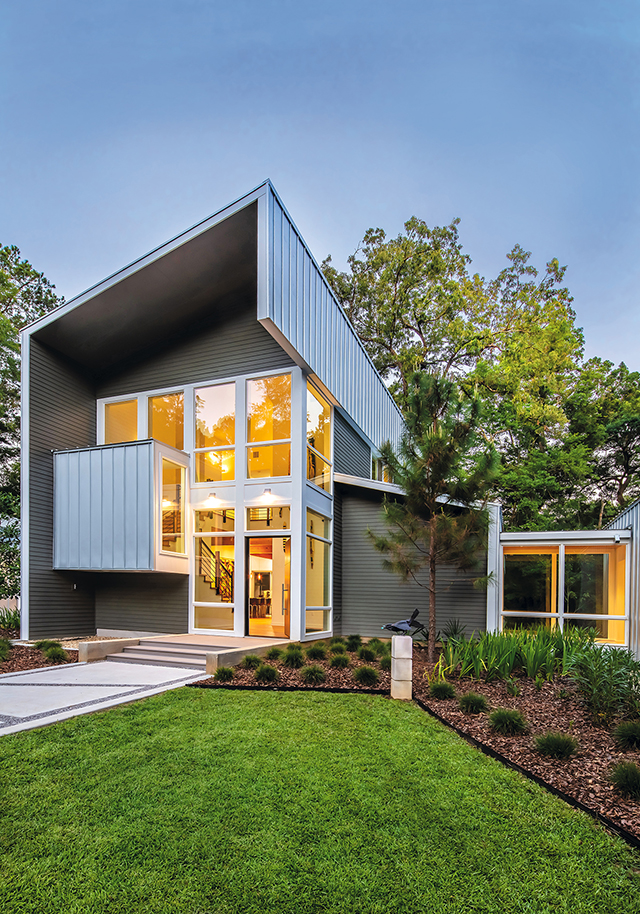 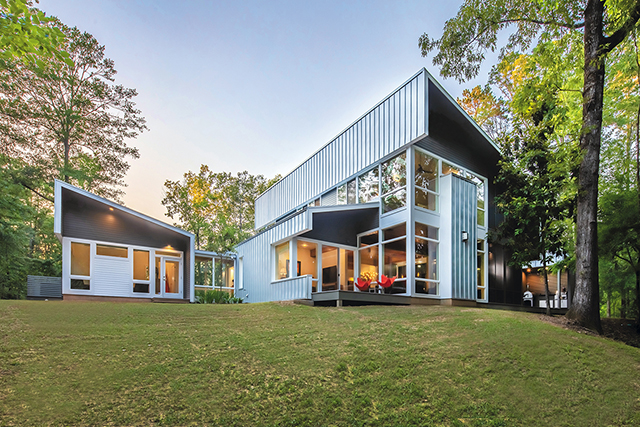 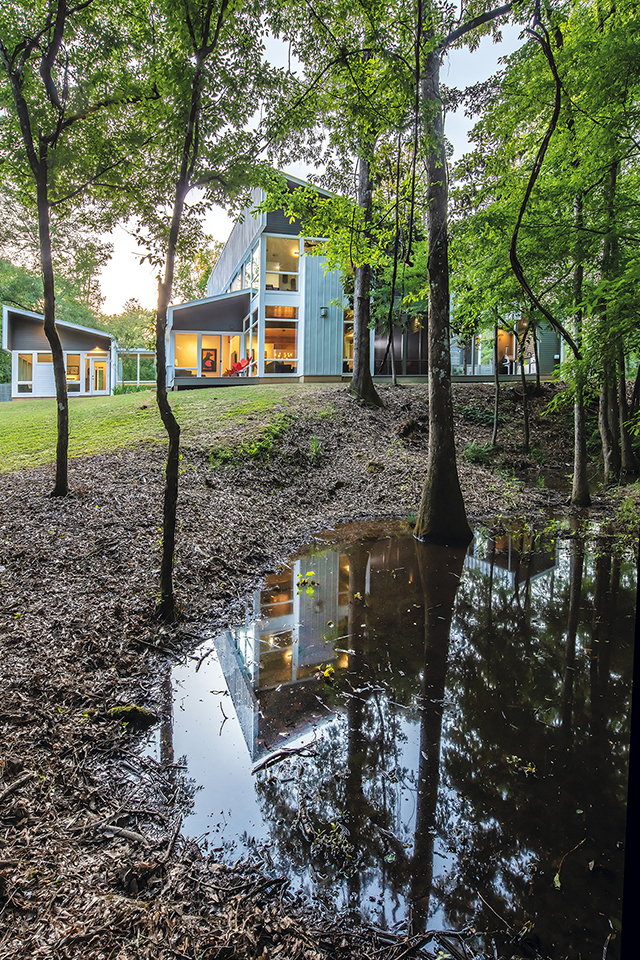 This theme extends to a 500-square-foot outdoor kitchen with a prime view to the bottomland. Located across a deck from the screened porch, crisp metal panels on the back wall tip up at a sharp angle to form the roof, and then dip down to rest on twin columns. “Roy has a pizza oven and a Big Green Egg,” Jeffrey says. “The whole wall of the screened porch can roll up to become an outdoor entertainment space, but we do have bugs down here that can carry you off if you’re not careful.” The decking is TimberTech Azek, a synthetic material that won’t rot in the moist climate.

“Our other goal was to minimize maintenance,” Jeffrey says. “Standing-seam metal is maintenance-free and will patina to a soft gray.” Likewise, dark green cement-board cladding, mounted in the shadow of the folded planes, seems to disappear into the foliage.

Some of the material details were worked out on-site.  Where metal siding “folds” over the façade, the crew built a double wall, which allowed the vertical plane to align with the outside of the concrete slab. “We wanted it to cantilever out past the face of the house and read as if it were floating off the ground,” says Jeffrey. Builder John Wilson explains, “We framed up a normal 2×6 wall and added another 2×6 wall that runs down past the slab. Each wall had to be double and cut off against the slab so none of the critters of Louisiana could get in there.”

“John has built all of our custom houses and really knows how to read a set of plans,” Jeffrey says. The roofer faced a different puzzle. “We originally wanted the metal to be continuous coming from the roof and going vertically down the wall, but there were too many waterproofing issues,” Jeffrey says. So the metal roofing and wall panels were installed with a flashed joint where the angles meet. The wall panels went up first, then the roof panels. “The wall and roof seams had to align; we used a commercial roofer, but this still challenged him,” Jeffrey says. 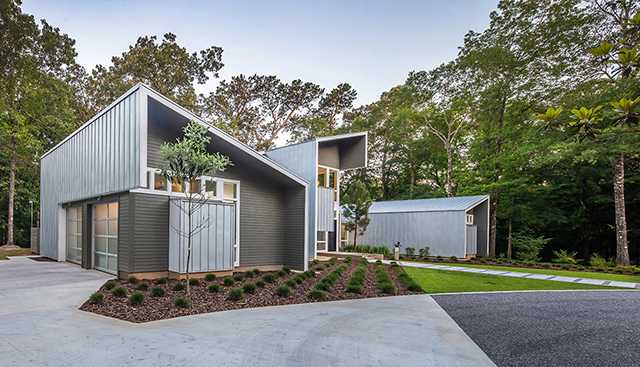 Art in the Round

Corresponding to the building’s functional divisions are metal-clad bump-outs that enliven each volume’s façade. The protrusion at the main entry makes room for a soaring, switchback stairwell, while on the master suite it’s a bathtub niche, and at the garage it provides additional storage.

Deferring to the owners’ art, the interiors have a minimal material palette of painted drywall, heart pine floors, and pine on the stairs, handrails, and dining room ceiling. In fact, their large art collection influenced the overall design. “They sent us a list of all their pieces, and as we went through the design, they had locations for artwork identified,” Pierre says. “They were very particular about where each piece should go.” In addition to the spine connecting the house’s three sections, the foyer and stairwell wall were designed to display “spirit sticks” commissioned from John Geldersma, a Santa Fe artist from Louisiana. “We sent him a 3D model of the foyer and he arranged the pieces,” Pierre says. 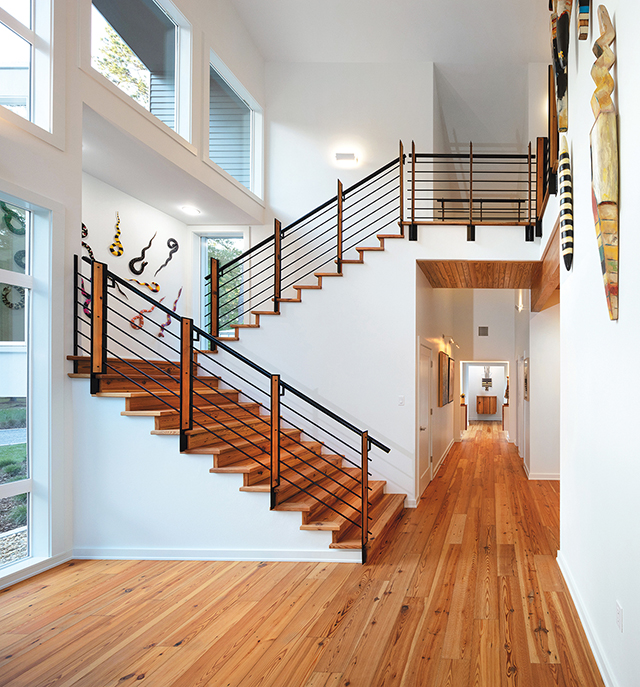 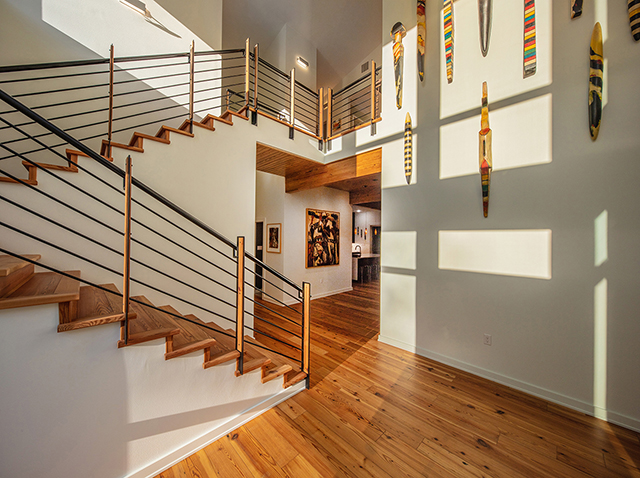 The dining room too was designed around a piece of art, in this case an 8-foot-diameter table built by John’s son, Wesley Wilson, a cabinetmaker. Throughout, custom furniture surfaces continue the folded theme, many of them designed by Roy. For example, the kitchen island, dining room sideboard, TV console, and other side tables feature top surfacing that cascades over the edges. 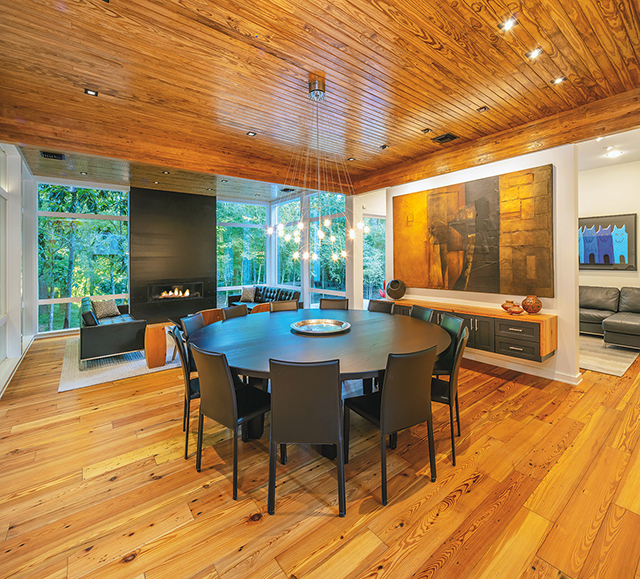 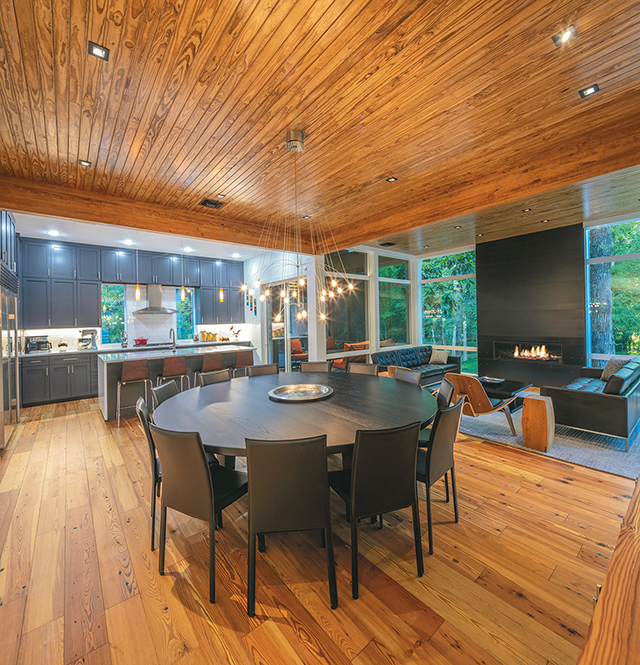 It’s easy to imagine the grandchildren making memories here. Not just playing in the creek or under the colorful spirit sticks, but in their own bedroom, where two sets of built-in bunks are separated by small steps that lead to the top bunks, and a passageway invites kids to crawl back and forth between the beds. A window looks down into the screened porch, inviting games of spy. 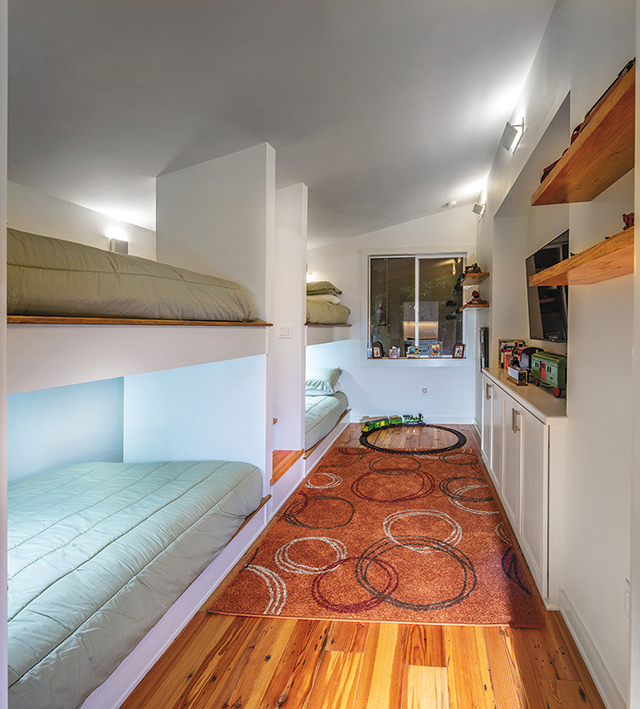 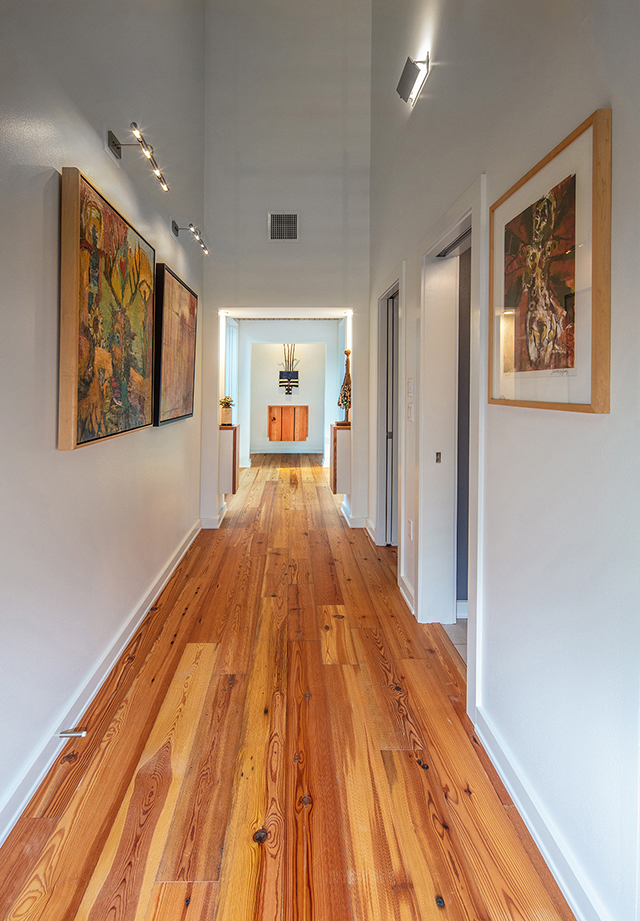 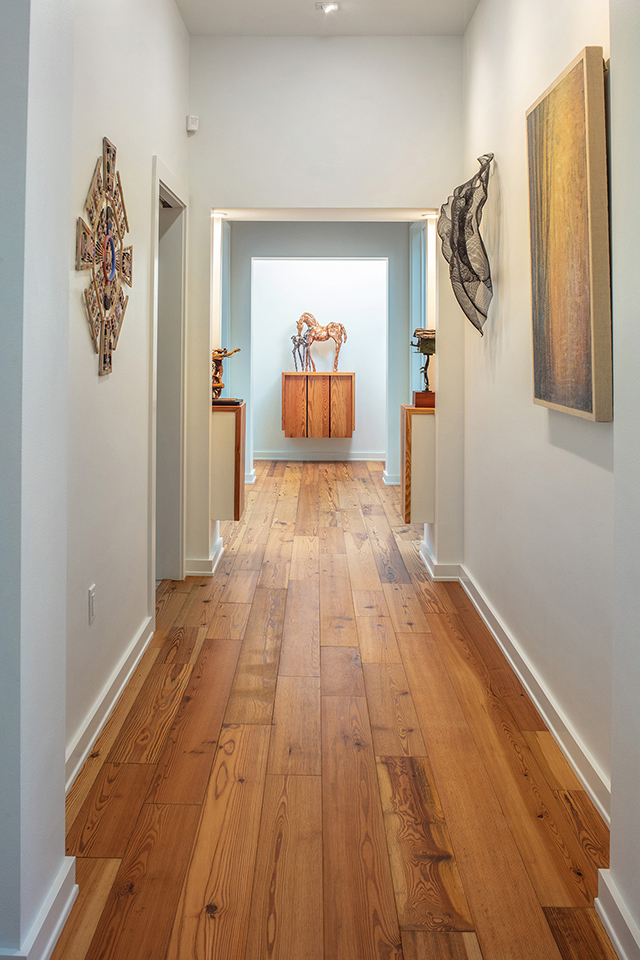 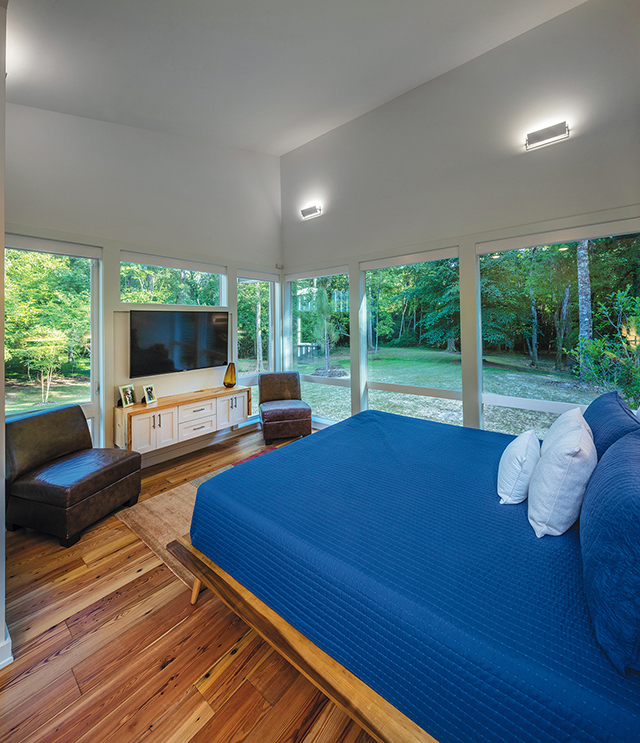 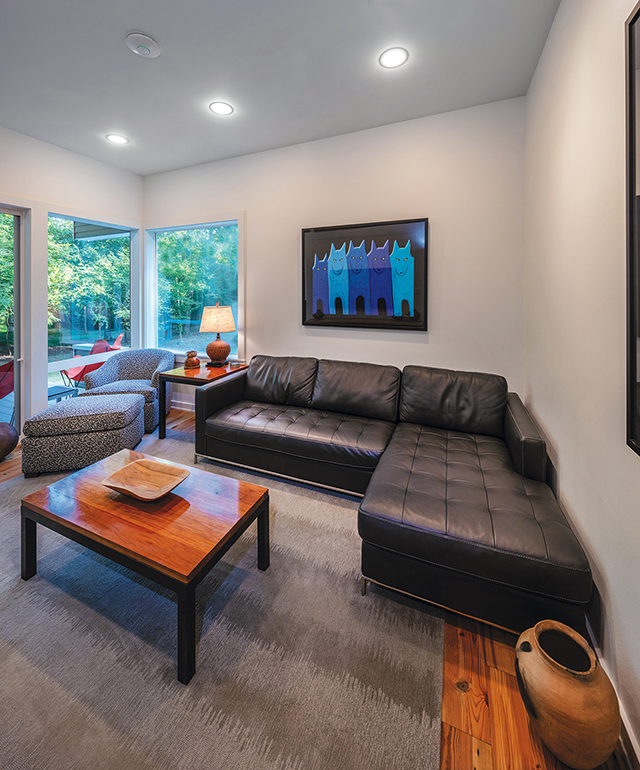 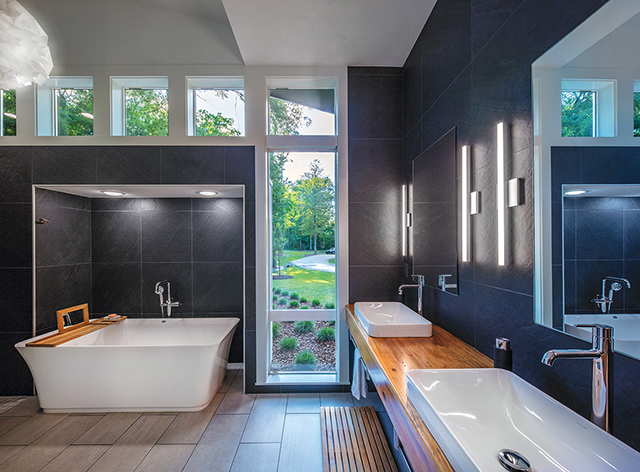 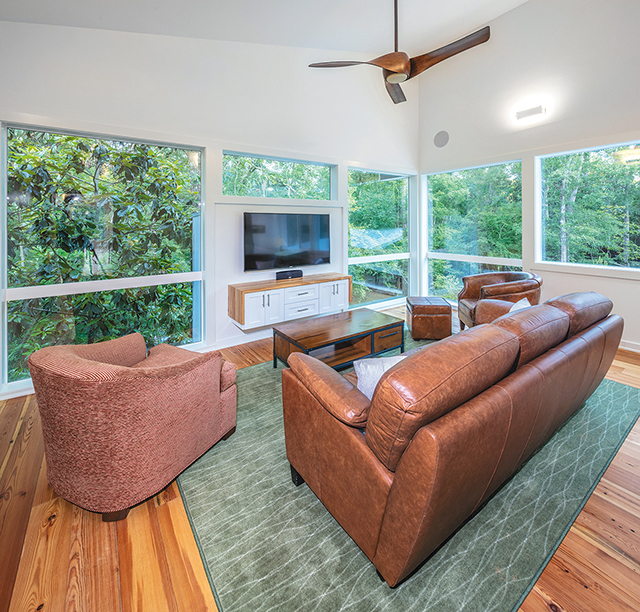 But if the bottomland reads as a fantasy world of dripping vines and pulpy shoots, the owner’s landscape plan imposes a civilizing sense of order. A nod to the house’s angled planes, the metal-edged beds, now grown in with grasses, lead the eye to the entrance, while a path laid in crushed limestone and concrete curbing directs visitors from the parking court to the front door.

“Every great project has great clients; they challenged us to do something unique and are pleased with it,” Jeffrey says. “They like the fact that they don’t need curtains on the windows and that their art is all accommodated as desired.” By borrowing some of the land’s vegetative patterns, Holly & Smith created a very personal house where the family enjoys gathering, a protective place where they can appreciate nature. 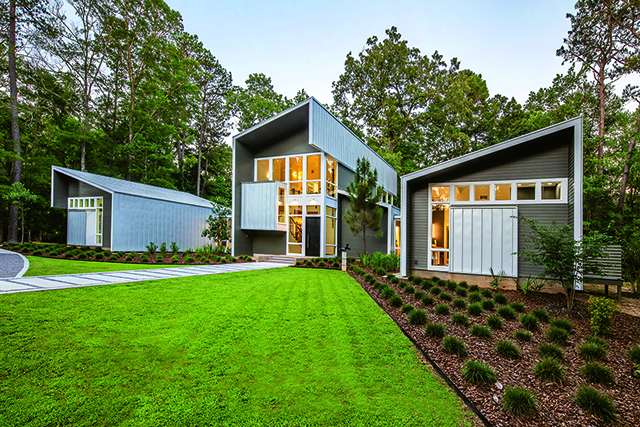 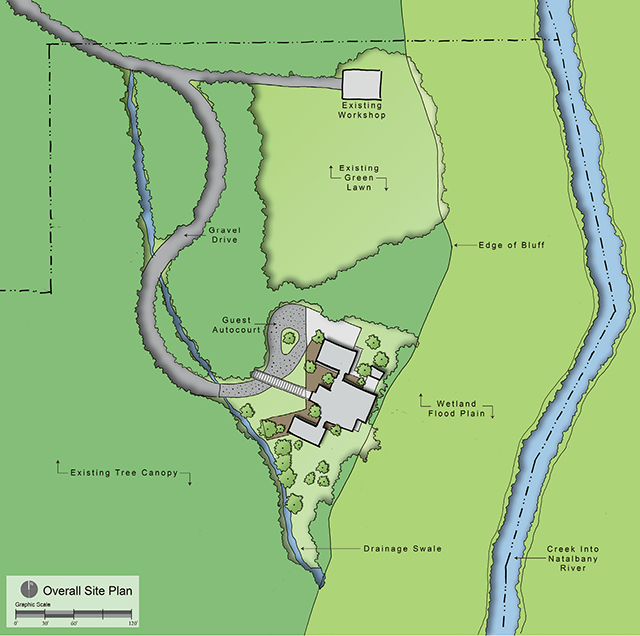 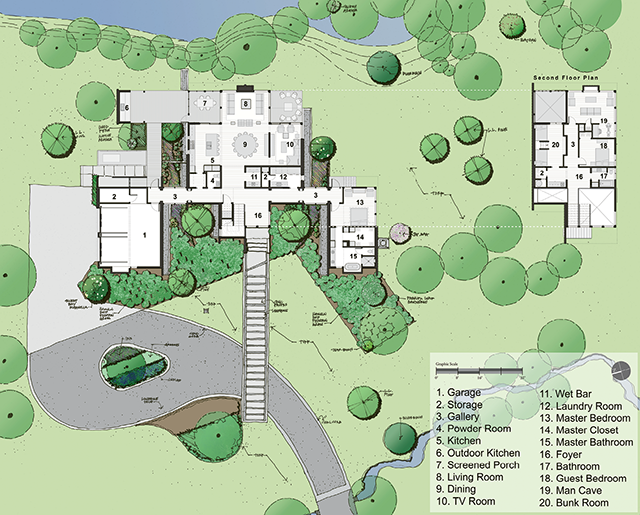