Campos Studio has a talent for twisting pristine, sophisticated spaces into realms of imagination and possibility. That makes the Brick House a dream dwelling for nimble minds like those of this couple and their four children, all under the age of 12. For years, the family had lived across the street from this lot on Vancouver’s west side near the University of British Columbia. The neighborhood, next to the 2,000-acre Pacific Spirit Regional Park on university endowment land, is filled with professors who live in Arts and Crafts-style wood houses that were built in the 1920s and ’30s to generate taxes for the university. Newer wood and stucco homes came along in the 1980s.

Having outgrown their home, the couple had been looking elsewhere, thinking they couldn’t afford to buy a better house in the community. But they loved the location, just four blocks from the ocean, and when their neighbor decided to sell his 1960s house on a double lot, they got first dibs. They were able to afford it by subdividing the lot and selling the other half to a developer. And they hired Campos Studio to replace the existing house with one that could accommodate their active family.

Practical and playful, the new construction sits on a 5,547-square-foot lot that is 30 feet wide and zoned to include a small building along the alley. It consists of a 3,800-square-foot main house and a 590-square-foot laneway house—prioritized over a garage—at the back of the lot. “Much of the program had to do with the kids—two girls and two boys,” says principal Javier Campos. “We were tasked with making it kind of indestructible: ‘the kids are going to play everywhere, so you can’t get too precious.’”

That notion played to the architects’ strength. Their interest in simple geometric forms that subtly stimulate the imagination was inspired by the “noncommittal structures” on Isamu Noguchi’s playgrounds, says architectural designer Czarina Ray. “We reference Noguchi’s aspect of play, in which none of the objects were designed for one particular use but open to interpretation,” she says. “Every child and adult will have a different imagination and creative mind; they will find their own way to hang out and use it.”

And in this house, they do. Conceived as an abstract box with interior volumes that bleed into each other, its three-story millwork stair core acts as a vertical multipurpose space—a wall of solids and voids on which one can store or display objects, sit, work, or make coffee. Transition zones such as stairs, multilevel landings, and vestibules serve as magical, liminal spaces that invite the occupants to spin in their own orbit, settling into solitary repose or joining the hive of activity.

The firm also has a knack for satisfying competing interests. The clients were set on having a clean, modern white brick house—an usual material choice for Vancouver. “We were not on board at first,” Javier says. “It was a bit difficult for us, because the residential core here is almost all wood.” The architects came up with a plan that mixed wood and brick, but the clients weren’t having it. “They just liked brick, and it’s their house, so we said, OK, what could we do?”

Agreeing to brick meant setting rules for its use—there would be no punched windows, only voids, and the perforations would be lined with wood. “The clients wanted to paint the brick white and have black metal windows and doors, which you see everywhere on Pinterest,” Javier says. “They wanted to use recycled brick, and when we found it, it had all these different colors that show their history. We said, let’s just mix this up. We made a deal that if they didn’t like it, they could paint it white, but we asked them to give us a chance to show them what it could look like. They were kind enough to do that and think it looks great.”

It’s an example of how projects evolve and become more interesting, Czarina says. “It would have been such a shame to cover up that history. Mixed together, the bricks become this new pattern. We like to work with craftspeople rather than controlling everything. We trust them to visualize as well.” 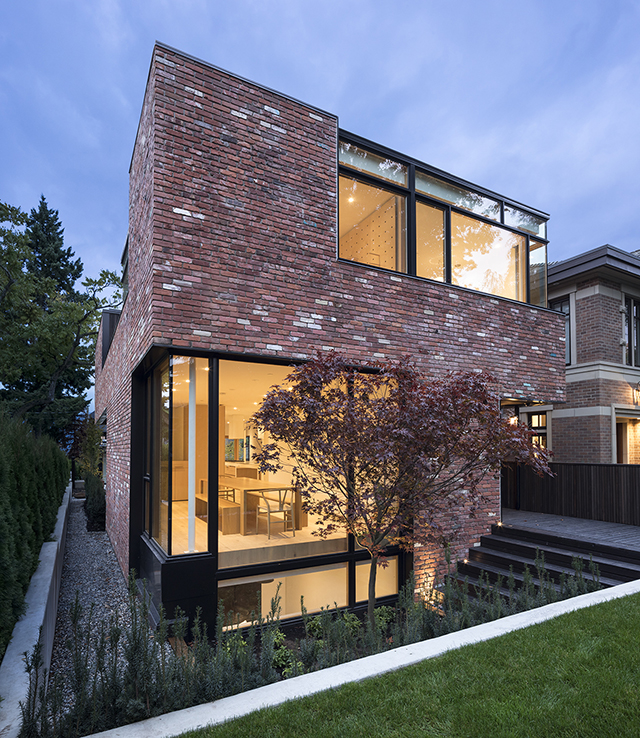 Oriented north-south, the house’s long west side faces a busy road and the densely forested park beyond. The new developer-built house is close by to the east. The front of the house faces south, and in back a deck and outdoor dining area look north across the lawn to the laneway house. Equipped with a kitchenette and bath, it serves as guest quarters for visiting parents and could be a future gym or hangout space when the children are teenagers.

The main house’s floor plan consists of discrete spaces that overlap each other, even vertically. The foyer opens to a central kitchen and sunken living room. On the other side of the foyer wall is the dining room, where a long wood table with slide-in benches often doubles as a pingpong table. Densely planted evergreens and a carefully composed western façade screen the main living area from the street activity, while a stretch of clerestory windows brings in light. Upstairs, a central play/study room and roof deck are flanked by the master suite and the two girls’ bedrooms with en-suite baths. “We couldn’t have the main floor as open to the forest as we’d have liked to, but the deck upstairs is pulled back so you don’t notice the street but can see the forest,” Javier says.” The two boys’ rooms are in the basement, along with a mudroom, family room, wine room, and storage and mechanical rooms.

Light-filled spaces and multifunctional built-ins inspire possibilities for work, play, puttering, and contemplation. “The dad described not wanting prescribed activities in each space,” Czarina says. “We played on the idea of how the different rooms can be fun but also look like architecturally sophisticated spaces where adults like to be as well.”

Milky white oak flooring and millwork supplies the sophistication and durability the design team was after. “They have large dogs, so even though the house looks light and white, the floors have a brushed finish that won’t show scratches and will age with the house,” Czarina says.

In the kitchen, white lacquered cabinets are integrated with the millwork stairwell, while the opposite storage wall continues into the living room. In a sea of oak, the house’s one material anomaly is the splash of marble on the kitchen island and in the master bath. The clients splurged on a fun, 14-foot-long kitchen island where they can roll out dough. More like a table than an island, it has legs at one end and stools “so the kids can make a fort underneath” if they want to, Czarina says. Cabinetry anchoring the other end contains an oven and drawers for iPads and laptops.

The design team incorporated underlying flex spaces for hobbies. At one corner of the dining room, millwork wraps around an opening containing a hidden bar that looks into the mudroom entry below. The husband, who has a whiskey collection, can open the doors and hang out there with his buddies. In contrast to a showy bar, it’s neutral enough for people to use it in their own way. And his record collection and turntable are hidden in the fireplace millwork. 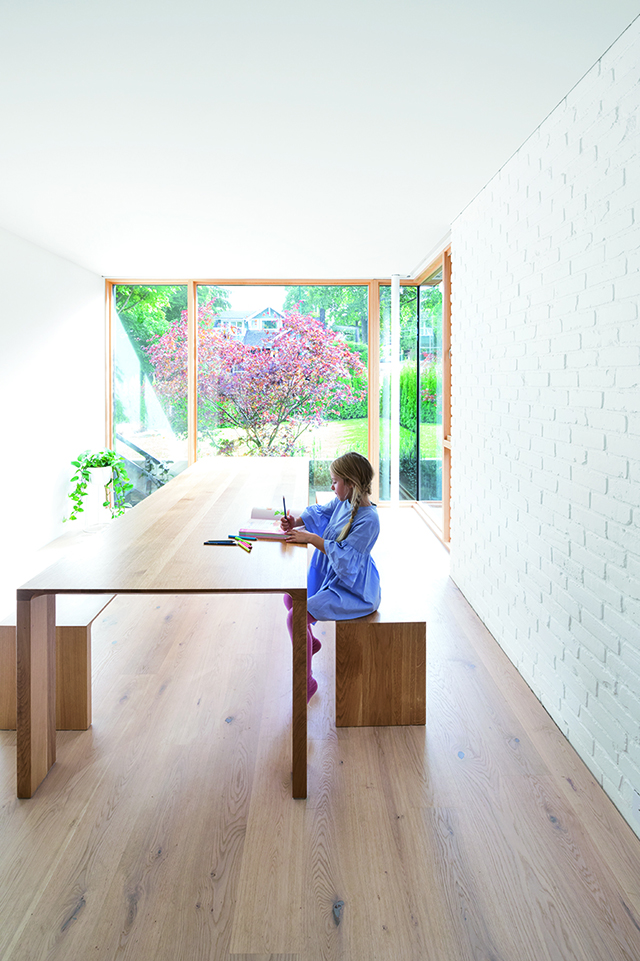 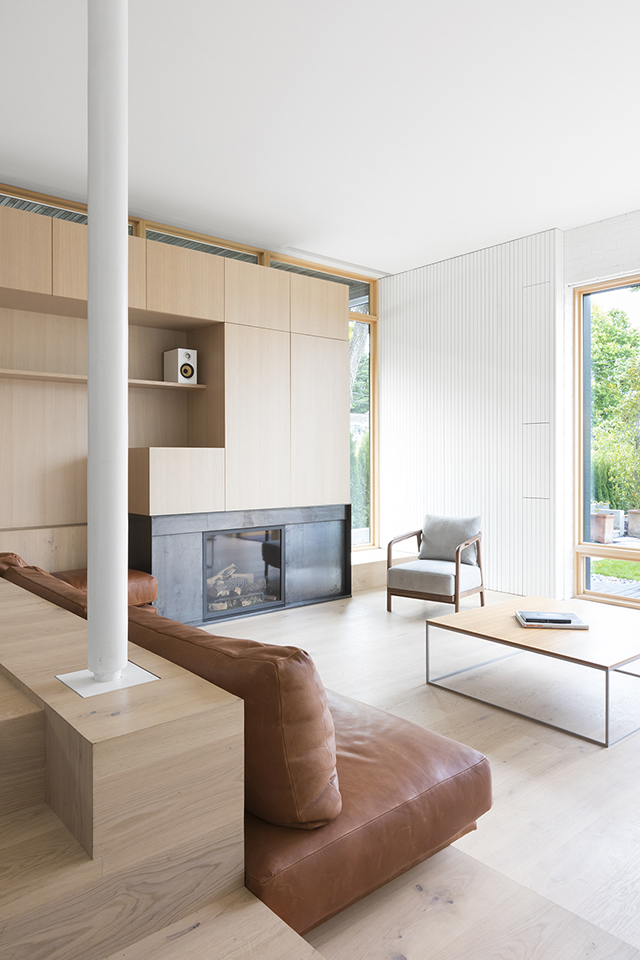 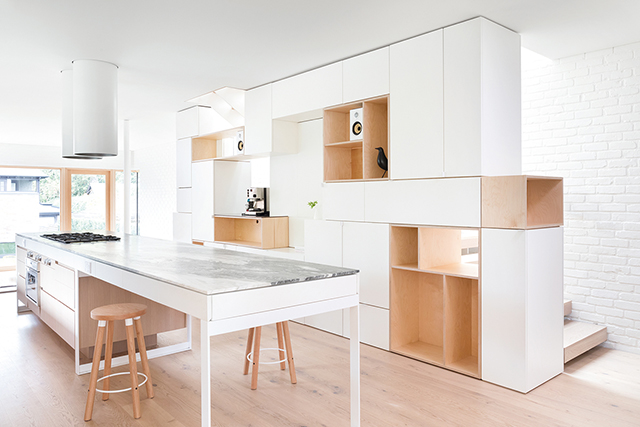 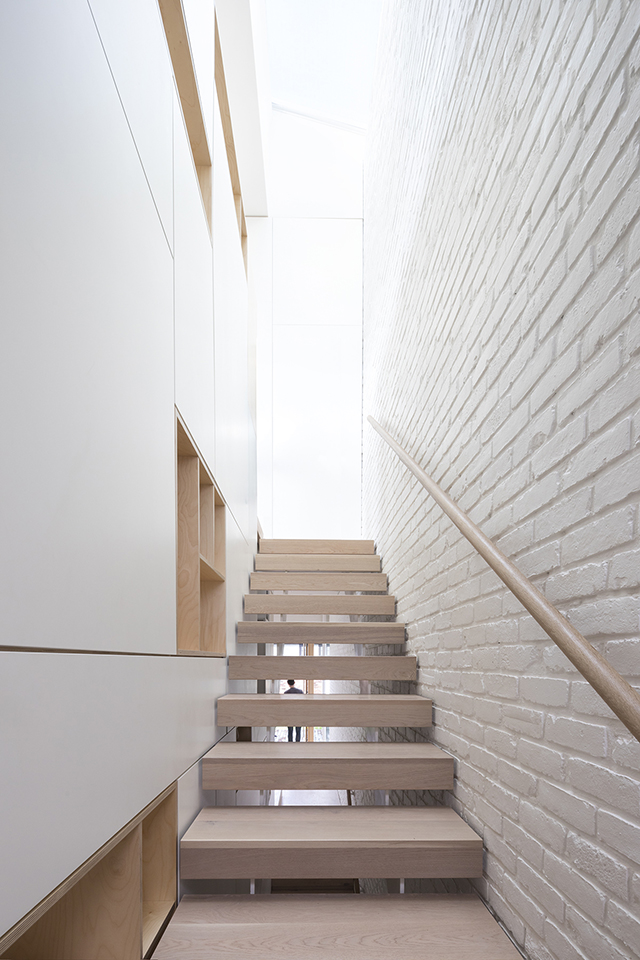 Top to bottom, the rooms revolve around the millwork staircase. The family interacts with the design, from openings they can play through to niches they can sit in. “Rather than being a pancake of three separate floors, we came up with a way to tie them together almost like climbing a play structure,” Javier says. “The millwork wall beside the stair is always being used.”

In the basement family room, that wall contains an entertainment center and places to sit and put books. On the main floor it forms part of the kitchen countertop, a peek-through storage cupboard, and coffee bar. Along the stair wall are lots of openings for books and objects, like a three-story bookcase. Upstairs it folds out into a work desk where the kids do their homework. “The whole stairway ends on top, where we carved out a deck with seating that looks over the forest next door and brings light in,” Javier says. A skylight at the top of the stairs sifts light down into the center of the house through the open-tread risers on a steel beam.

The interlocking compositions even allowed the architects to skirt some of the building codes. For example, the kids can—and do—jump onto the couch in the sunken living room from the kitchen landing. “Someone else may have put a guard rail there at the sofa but we made sure we sought other solutions to avoid those requirements,” Czarina says.

“It meets code because the couch is built in,” Javier explains. “If you miss the couch, you fall less than 2 feet. We tried to take barriers away so the kids could make up their own things to do.” 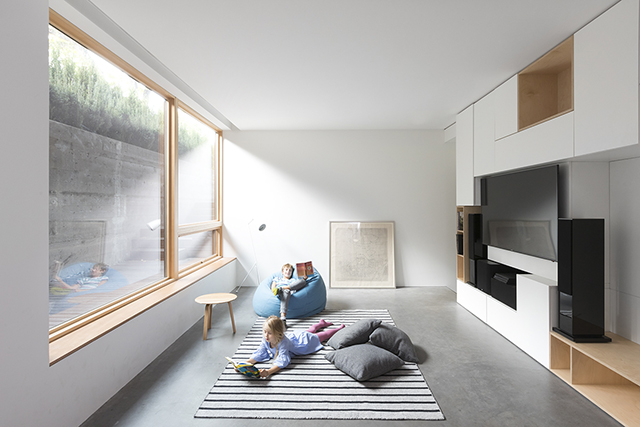 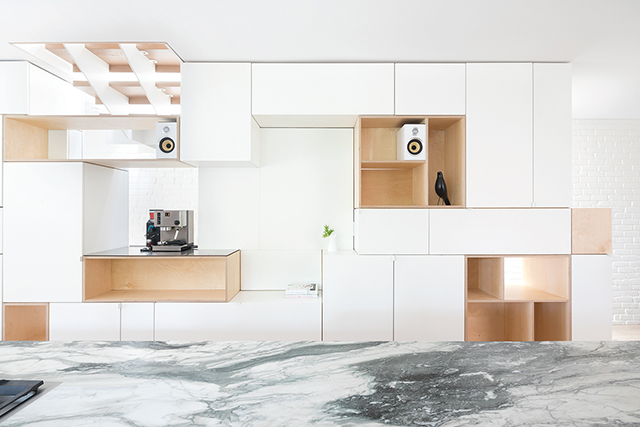 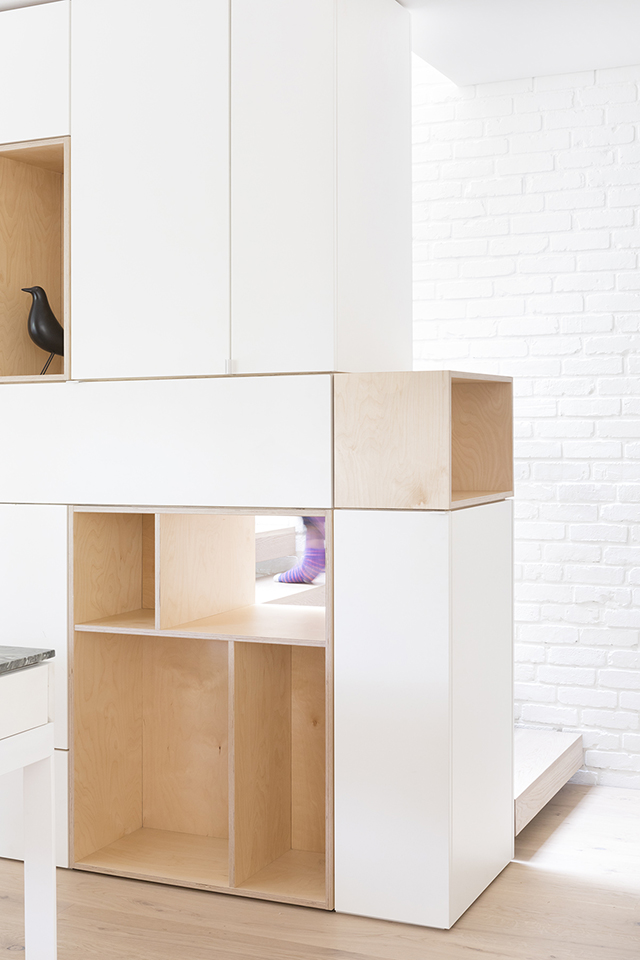 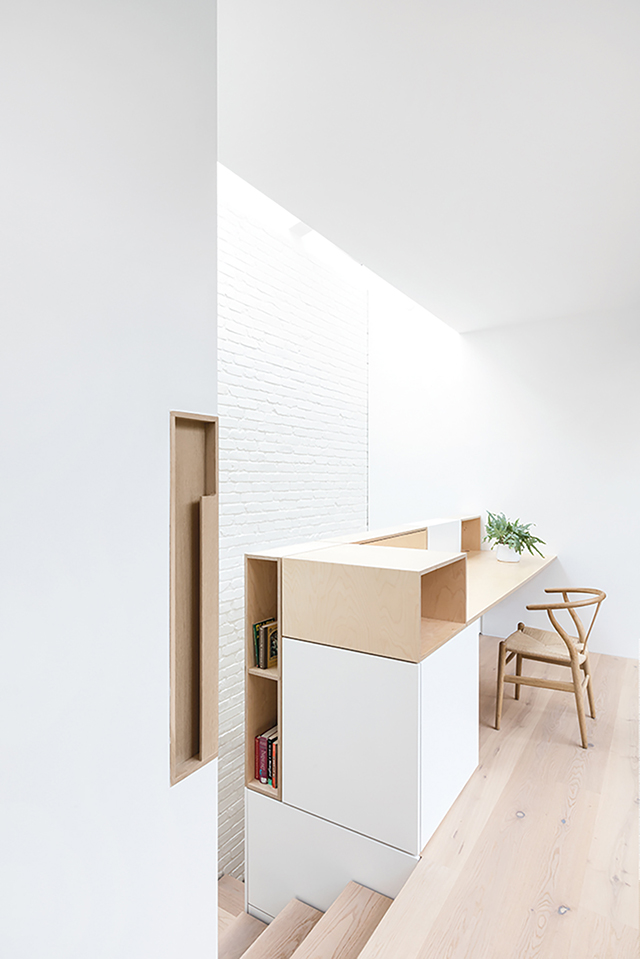 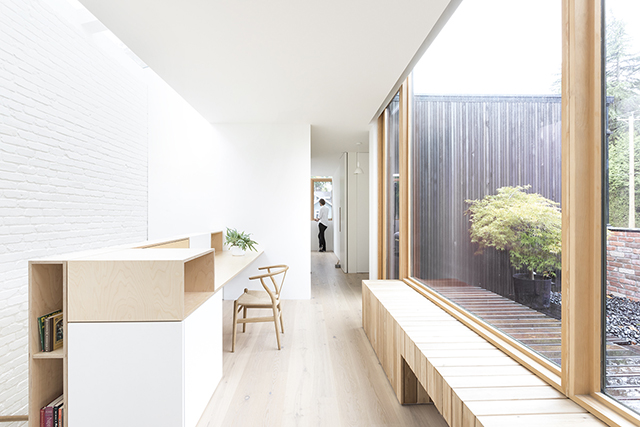 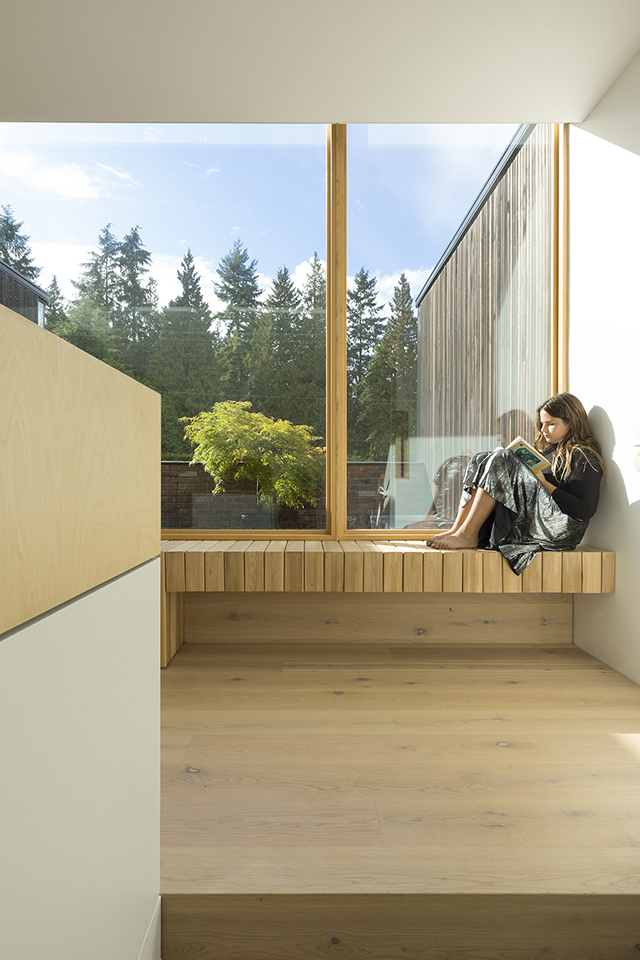 Every point of passage was executed with thoughtful precision. Outside the boys’ bedroom, a board-formed-concrete retaining wall creates a light well with a tree and a stepped platform where they can sit and play. Other gentle transitions encourage this too. Along the west side, the back steps to the mudroom entrance are a series of platforms along a board-formed-concrete wall, where a big window lets light into the family room. The wall is planted and embedded with lights to give the family room a view. “Because the sky is gray here, the concrete on the wall and on the exposed basement floor is tinted darker so it doesn’t look dull and match the gray sky, and the darker color gives it more weight,” Javier says.

Material connections are equally artful. Campos Studio’s philosophy is to make things very simple, “almost dumb, but incredibly rich,” Czarina says. Interior doors are ceiling height with inset wood pulls and a roller latch at the top, rather than a lever and lock. And there are no curtain walls or fancy window systems, just standard windows detailed in a novel way. In a girl’s bathroom, the mirror seems to extend from the corner window. That’s because the second-floor windows sail past the ceiling plane. “That’s also where we hid the blinds,” Javier says. “It reflects the way we cut the brick on the outside—no hole in the wall but a void that’s been cut out. Without a window head, the way light flows in is very different.”

The foundation achieves this seamlessness too. Rather than pouring a conventional concrete foundation 10 inches above grade, Javier specified non-porous brick below grade that meets the recycled brick gracefully, adding a drainage trench to make sure the foundation doesn’t sit in water.

A testament to the value of such gestures, the house cost about 25 percent more than the spec house next door but was appraised at 40 percent more, Javier says. There’s little doubt that the design works as intended. “We thought the house would be empty the day we were photographing, but the family turned up and started doing what they normally do, and we captured those moments,” Javier says. “It shows that the house works very well for them.” 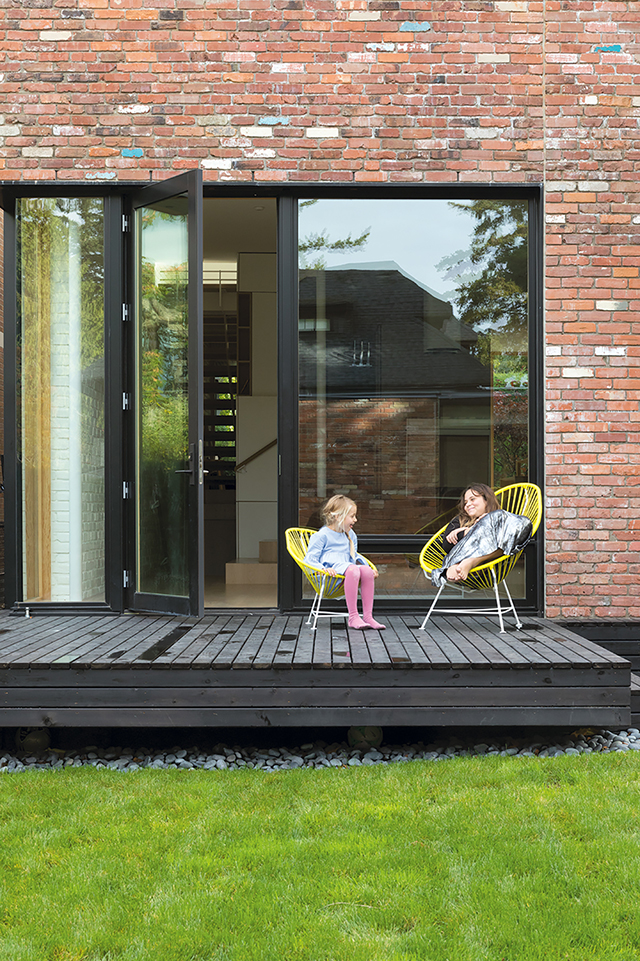 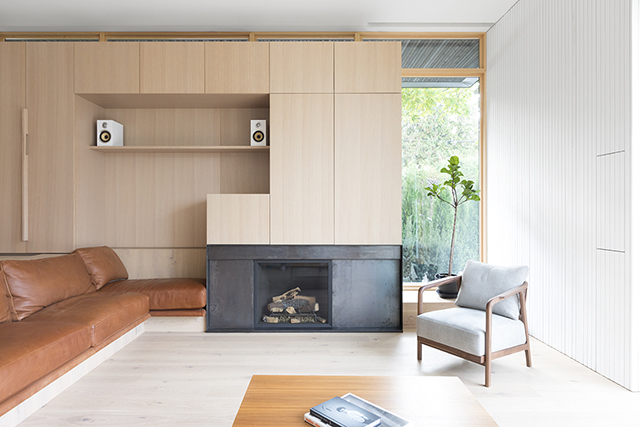 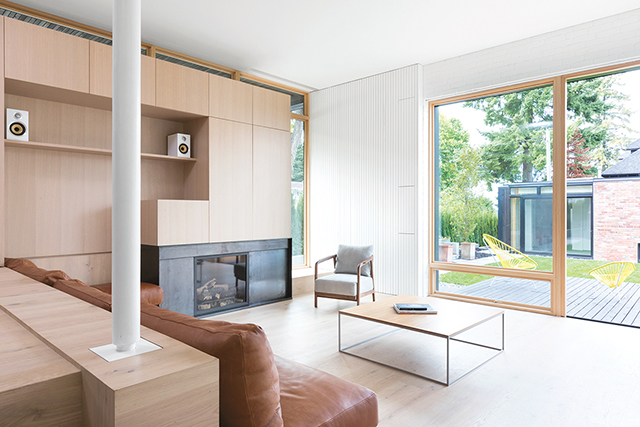 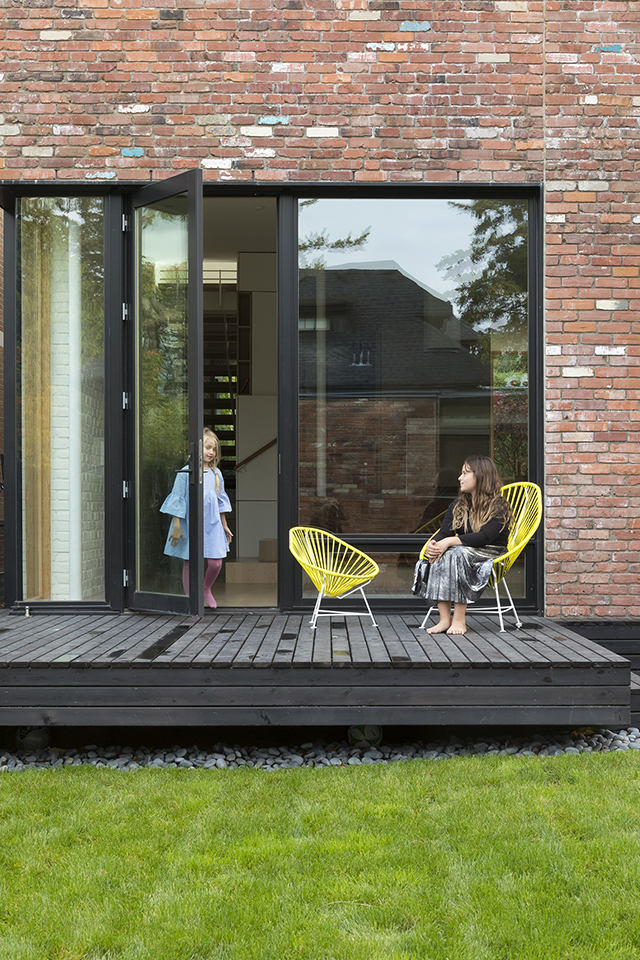 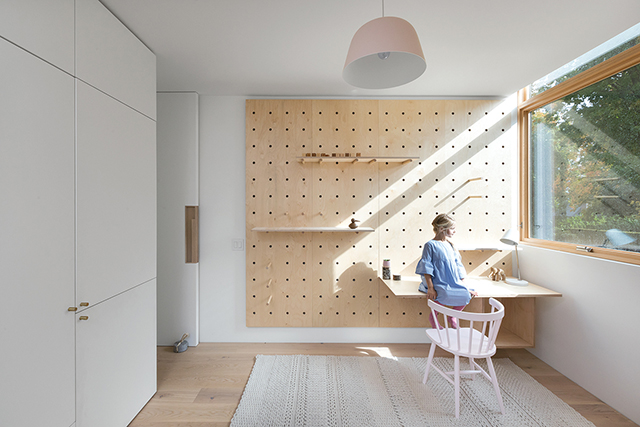 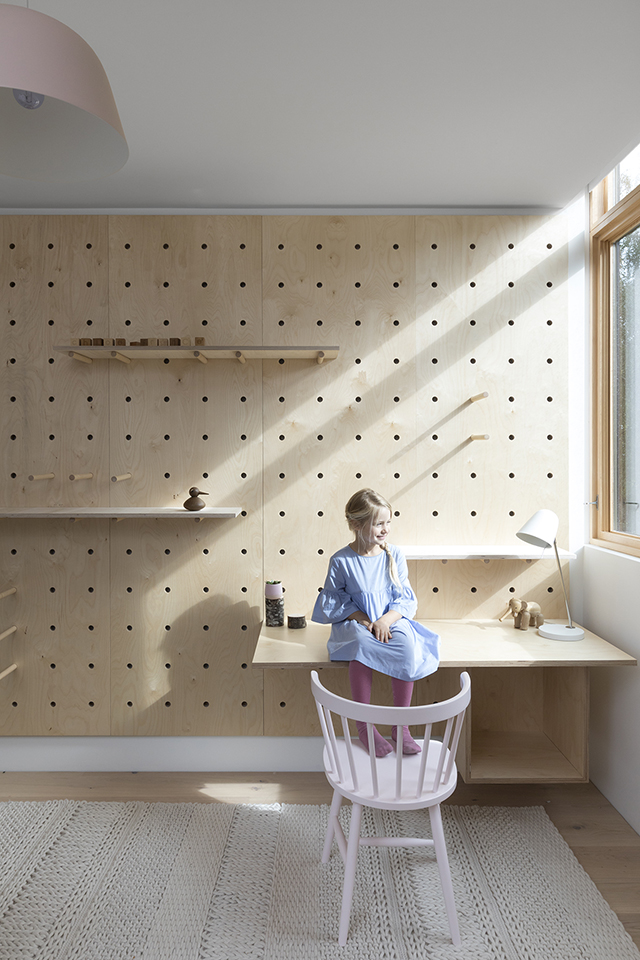 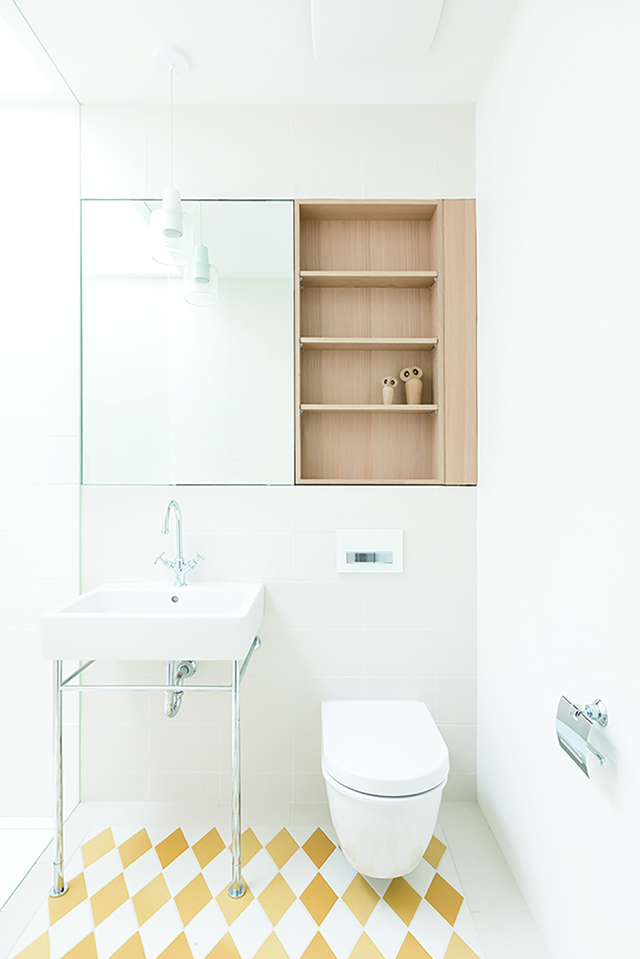 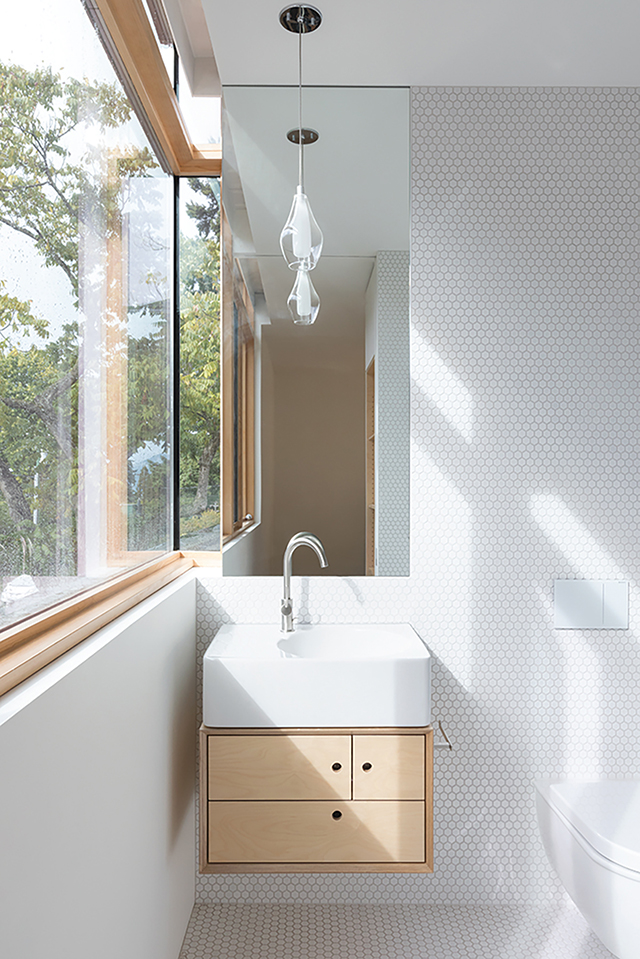 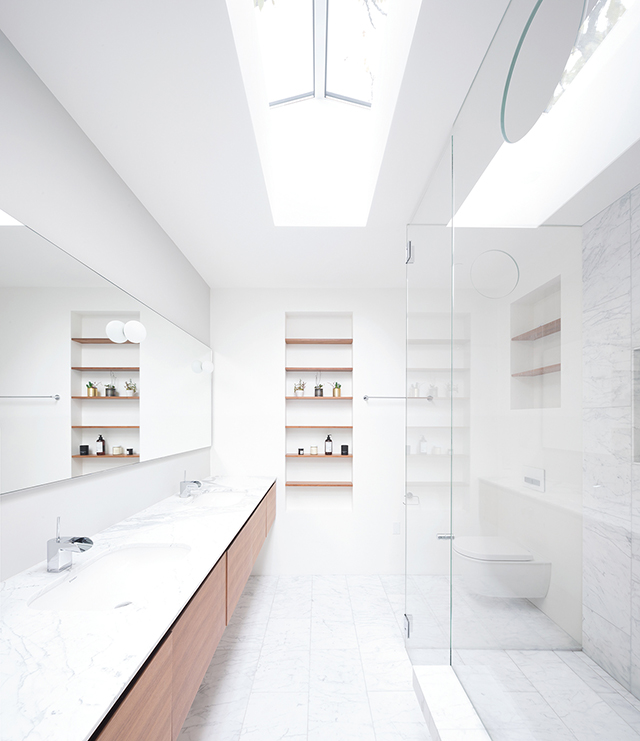 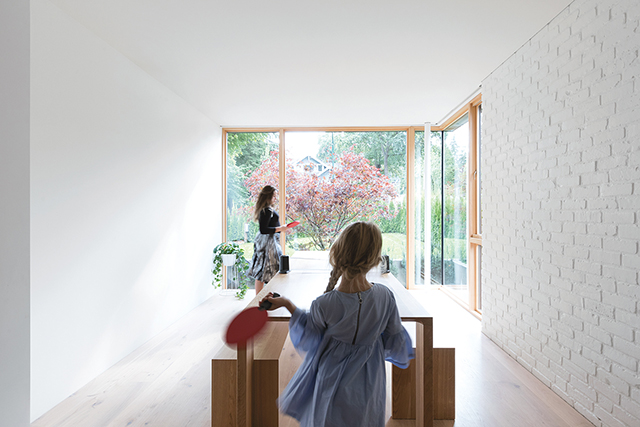 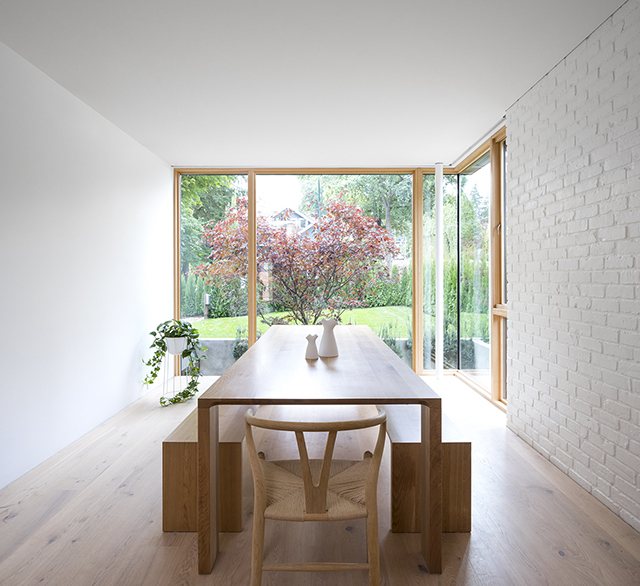 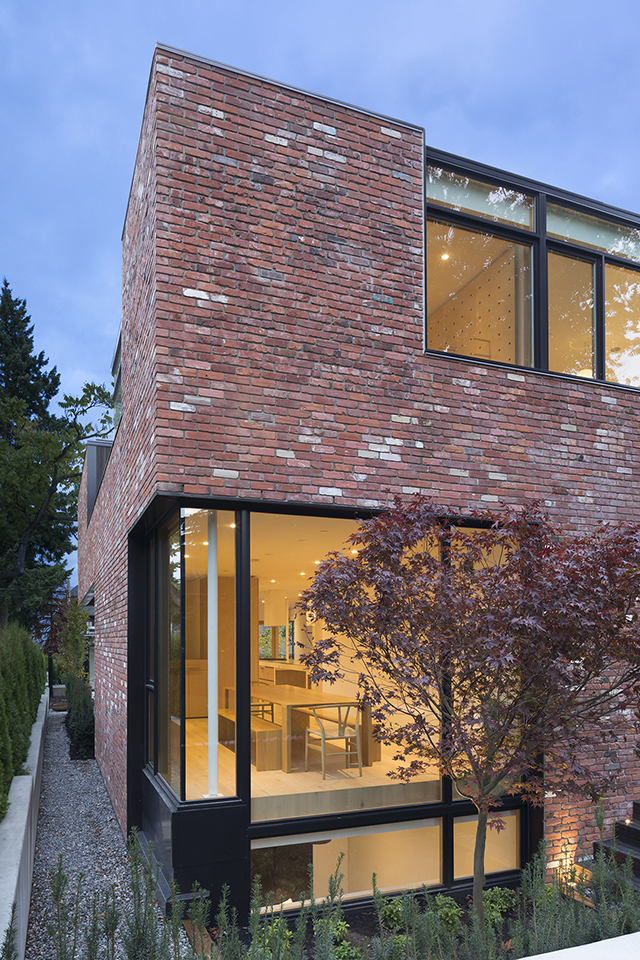 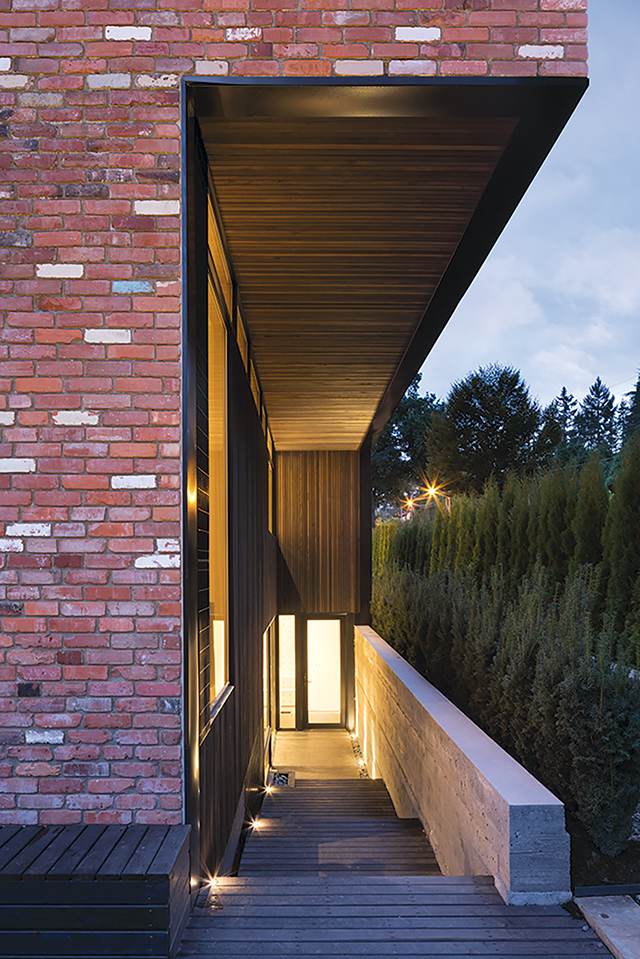 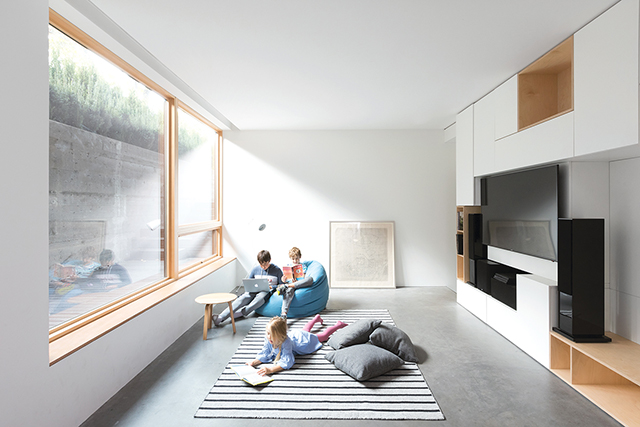 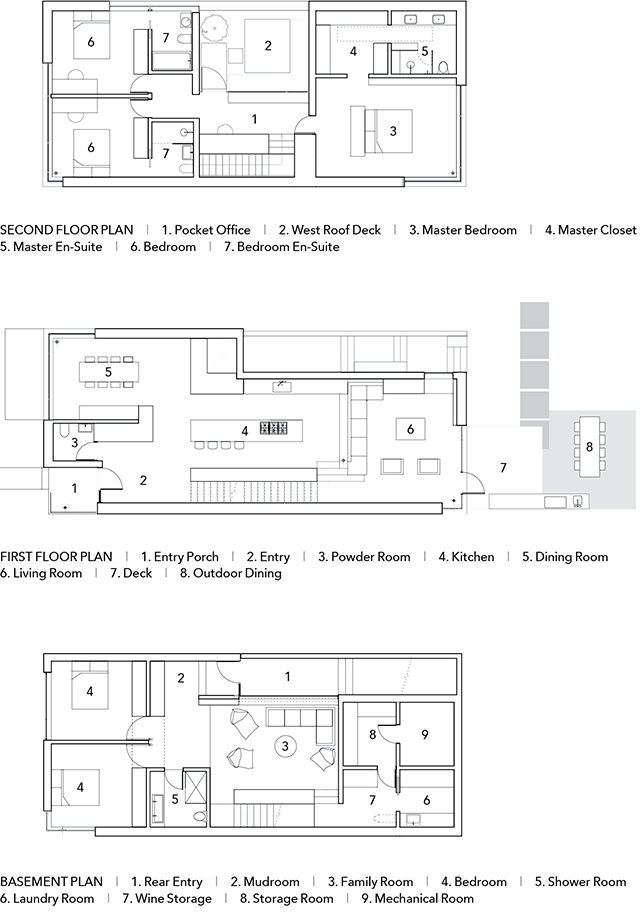 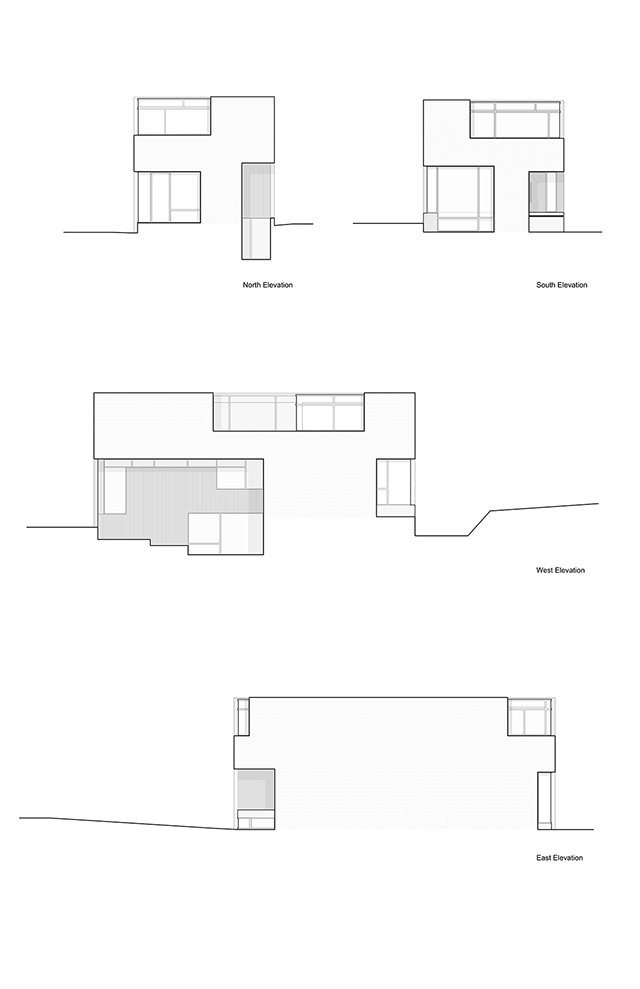