California’s history of modern architecture is all about connecting to the temperate climate, and it’s hard to think of a better site for the continuation of that story than in Sonoma’s wine country, about 85 miles north of San Francisco. The couple who own Split Rock Springs Ranch, a 30-minute drive up a winding road from the tiny town of Cloverdale, lived in a tent compound on their 160-acre property for several years before they asked Nielsen:Schuh Architects to design a permanent house. The two men had left behind a life in the Hollywood music industry to live remotely, planting a large olive orchard from which they make oil that is sold locally. They slept in one tent, cooked in another, and showered outside.

“They had spent so much time shutting themselves off from the traditional things houses have, like formal entries, that they were very open-minded,” says Amy Nielsen, who runs the firm with her husband, Richard Schuh. “They also raise show dogs and are judges. Our first meeting with them was on a rainy day, and there were all these well-behaved dogs, Dobermans, in the tent with us.”

It’s easy to picture a life with dogs in this camp-like compound, composed of a 2,331-square-foot main house and a 453-square-foot guest house. Oriented north-south, the main building’s rectangular footprint sits just below the top of a small mountain and contains a mudroom/office, open living space, and master bedroom and bath. A wall of glass on the long west side opens to a bar-shaped pool facing the orchard and the view. The couple does much of their cooking outside next to the pool, where a barbeque grill and dining area are tucked under the deeply cantilevered roof of the detached guest pavilion containing a bedroom, bath, and wet bar.

On a property with no traditional front or back yard, overlapping rooflines on the main house and guest pavilion mark the off-hand entryway that Amy alluded to. Visitors pull up to the gravel parking court on the north end of the house and walk between the two buildings, where the rooflines overlap just enough to provide cover from the weather. “We wanted a sense of lightness about the entry,” she says. “There’s a little bit of compression or pause where you suddenly see this magnificent view looking over the pool to the valley below.” To the left, a glass door in the curtain wall leads directly into the open living area. 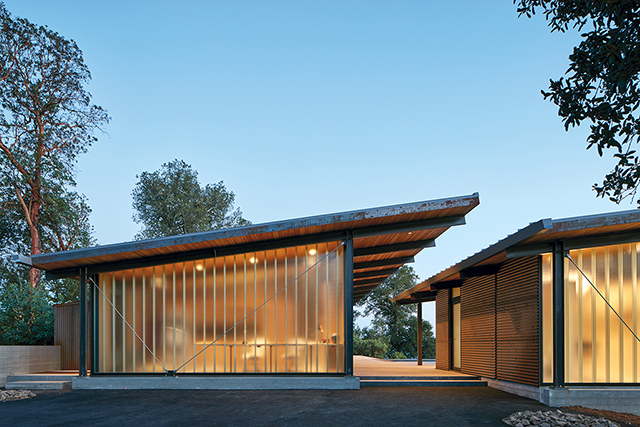 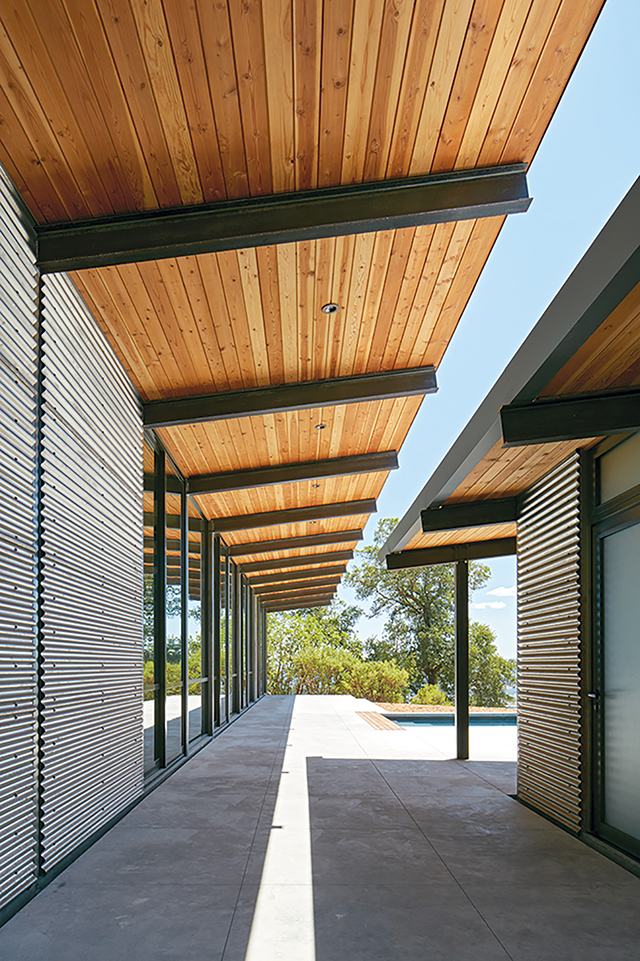 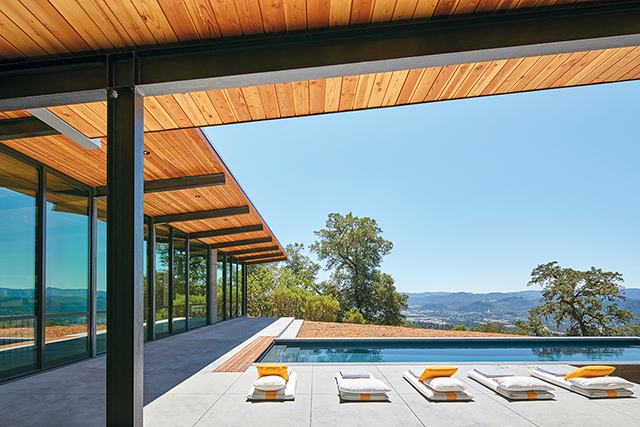 A minimal footprint and low maintenance were the operative words for building on this rugged site covered with oak, madrone, and fir trees. Its off-grid location—a 90-minute commute for builder John Marsey and his crew—and challenging geological conditions drove almost all of the construction decisions, and in turn the design. Its boxy footprint was the direct result of rocky, unstable soils that required a deep-drilled pier foundation; a complex footprint would have put the cost out of reach. And rather than hauling in framing lumber, it was simply easier to fabricate off-site the modular, exposed steel frame that gives the house its distinctive look.

“There are no beams or headers interrupting the glass openings, just a series of 16 or so pi-shaped steel frames—a T with two stems—which extend to generous overhangs outside, and Douglas fir structural planks spanning between the steel frames,” Amy says.

The exterior cladding was intended to suggest a tent-like fabric enclosure. Filmy channel glass, braced with stainless steel tension rods, was hung on the end walls of the main house and guest house facing the entry. On the far side of the house is a matching master bedroom wall. “We all thought it hearkened back a bit to the canvas tent compound, which is still standing,” Amy says. “It adds a lightness to the house; when visitors arrive at night on the long, dark road up to this compound, the glowing walls are inviting and light up the surrounding land in a nice way.”

At other points, such as the guest house wall near the pool, Corten panels drape lightly between the structural columns, with their undulating edges exposed. “The owners do a lot of their cooking outside along the south wall of the guest room, and it’s clad with metal so it’s like one big outdoor porch,” Amy says. The apparent lightness of these materials belies the fact that they are fire-resistant—a priority given the threat of wildfires and the ranch’s limited access to emergency services. The shallow-pitch roof and fascia are also metal-clad to guard against wildfire.

So often it falls to architects to help clients reconsider the spaces they think they need. But this couple was different. “They came to us with the understanding that they didn’t want busyness or complexity—only what they needed and no more,” Amy says. “Simplification for them is that they can live in just that one block of house, and the guest block can be closed off.” 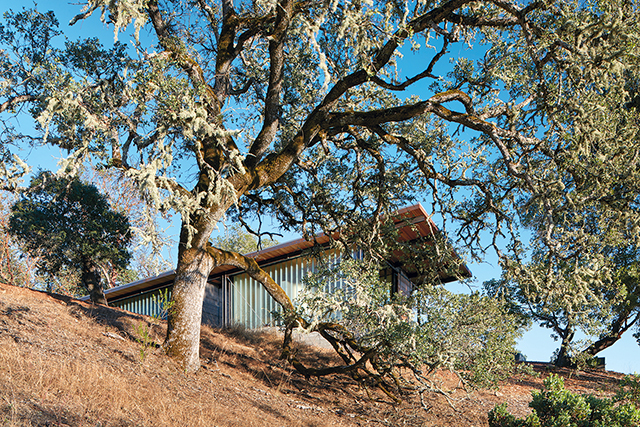 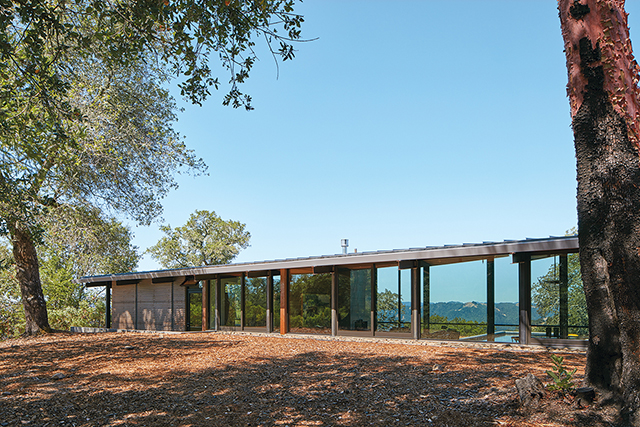 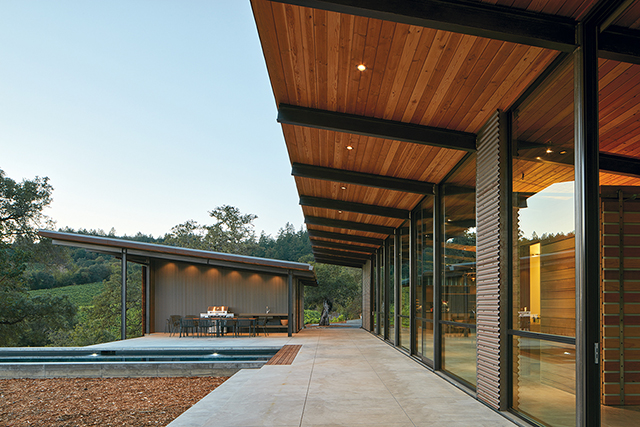 That sense of restraint guided the interior design, too. A continuous wood ceiling slopes up to the west, warming the steel-and-glass superstructure. Beneath the floating ceiling, partial-height partitions bookend the open living space. On the north side, the kitchen’s maple cabinetry divides the living area from the office behind it. At the other end of the house, reclaimed redwood planking and sliding screens zone off the master bedroom and master bath, whose glass lid provides acoustical privacy while allowing the main ceiling to hover above it.

Since this land is pretty far from the nearest utility pole, all of the house’s power needs are supplied by an 8-kW-hour photovoltaic array installed on the south-facing hill below the house. The electrical load is low, however, thanks to the building’s broad overhangs, rolling shade screens, and cross-ventilation, eliminating the need for air conditioning. Another resource-efficient move was the radiant-heated concrete slab floor, installed in a single pour thanks to John Marsey’s skilled team. “Often we do use a topping slab, but we knew this builder could pull it off,” Amy says. “It’s a different set of people who do rough foundation-type slabs versus finish slabs; if you find the right people, you can get what you need.”

Nielsen:Schuh has been working with builder John Marsey since the early 1990s, when he built Amy and Richard’s own house and studio. “He is a small-scale builder who gives a lot of attention to detail, and this project was perfect for him,” she says. John oversaw the drilling of roughly 52 piers and the pouring of grade beams that connected them in a gridwork. One virtue of the envelope design was that, with all the loads bearing on the grade beams, the superstructure and roof could be built before the concrete slab was poured, he says.

A second benefit was that the roof provided shade and shelter while the under-slab plumbing, electrical, and radiant heating was being laid, and as the roughly 90-foot-long-by-22-foot-wide slab was being poured, finished, saw cut, and cured. To control cracking, “we did some deep control joints under walls and on the second day did a very fine ‘crack chaser,’ where you saw cut it in a straight line and then come back with a diamond cutter that cuts a V into that, ending up with a nice chamfered detail,” John says. “All the cracking happened in the saw cutting, so it worked as planned.”

John, who studied architecture, was passionate about this job despite its challenging logistics, and his enthusiasm was infectious. “It was such a clear concept, and the design is so pure in the modern sense that the structural elements are the decoration,” he says. “I brought a lot of subs from Napa, close to a 90-mile drive. Everyone involved wanted to do it; it wasn’t just another project.”

For her part, Amy says she enjoyed the challenge of working for clients who had budgetary discipline, and who didn’t want to turn it into a suburban landscape. It sounds like the clients are happy too—at least most of the time. “They love the house, and they have guests who won’t leave,” she says. 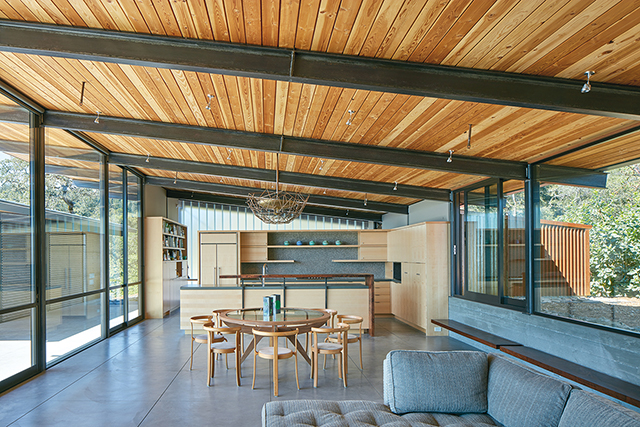 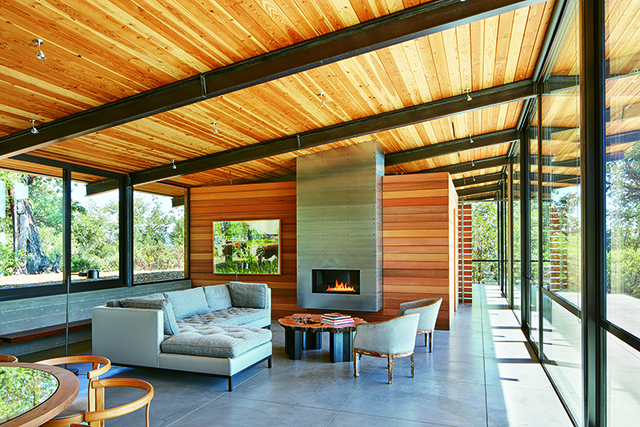 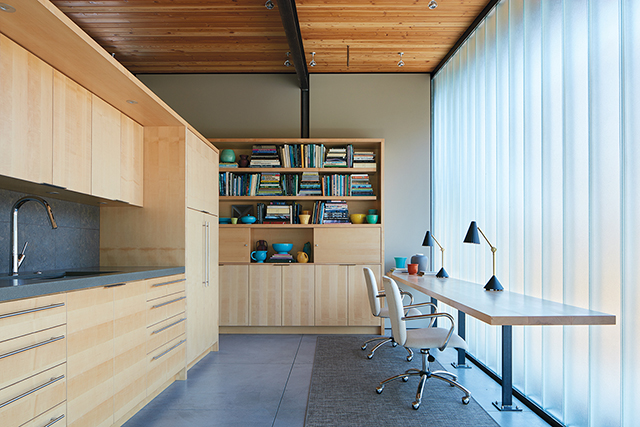 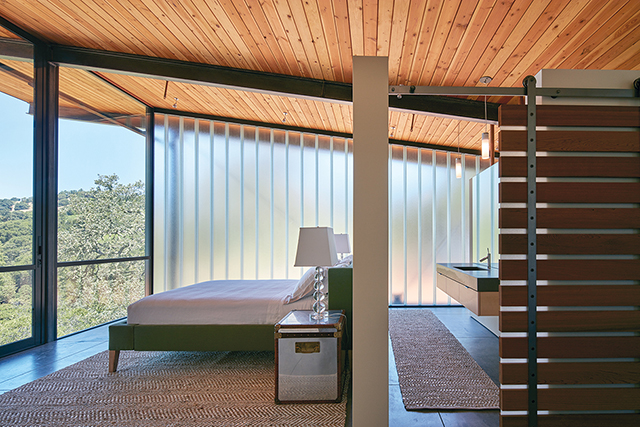 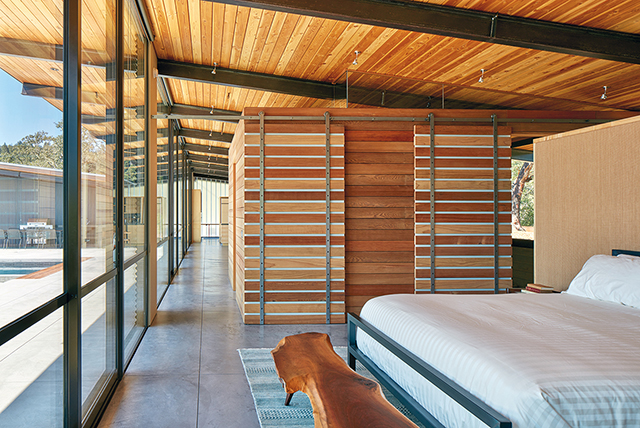 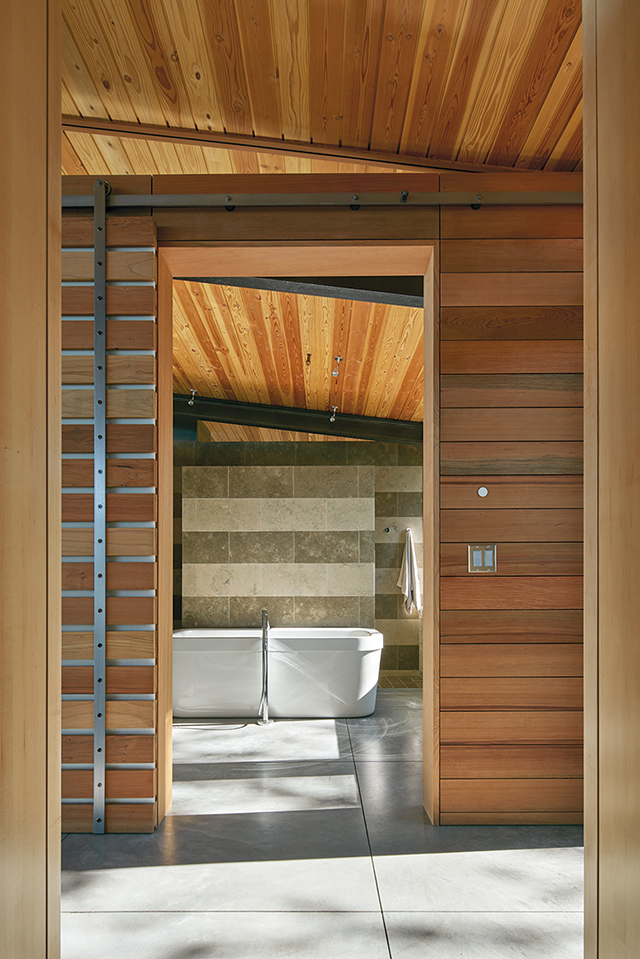 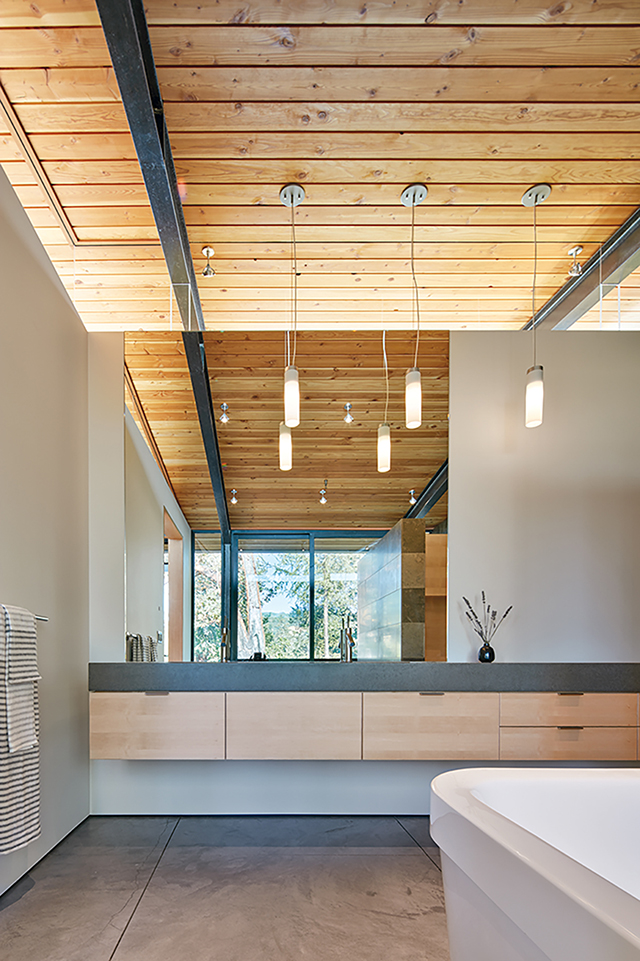 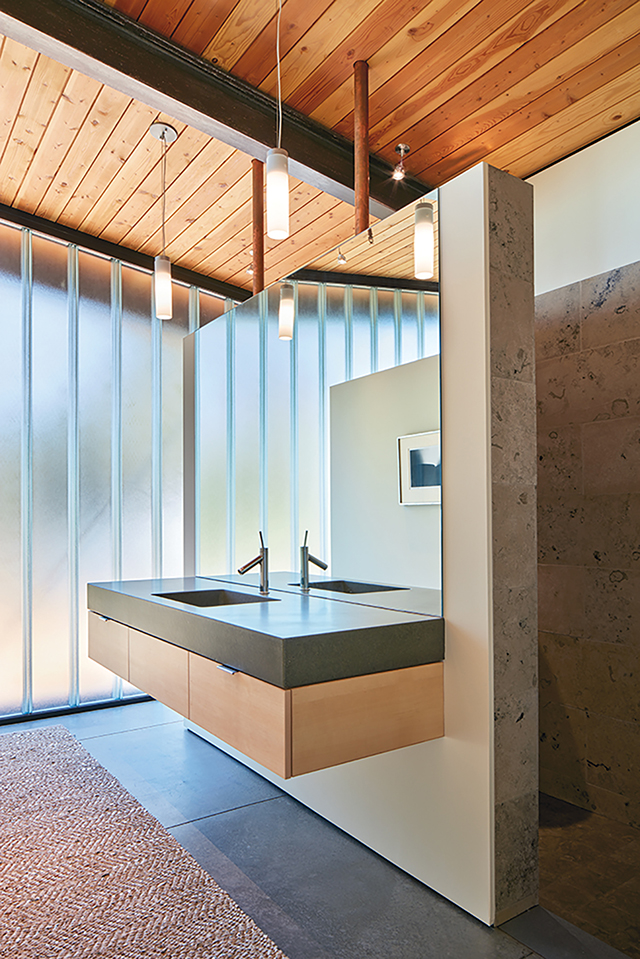 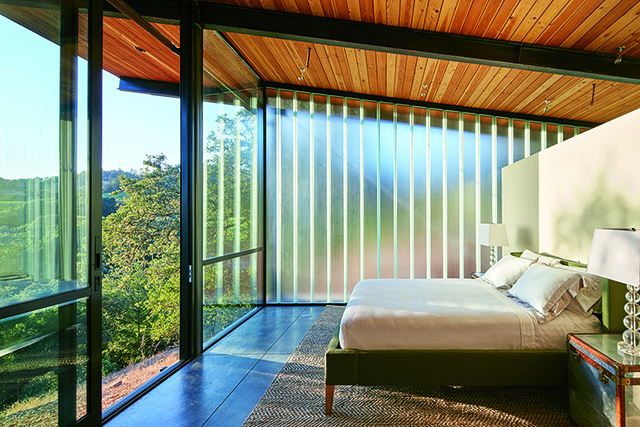 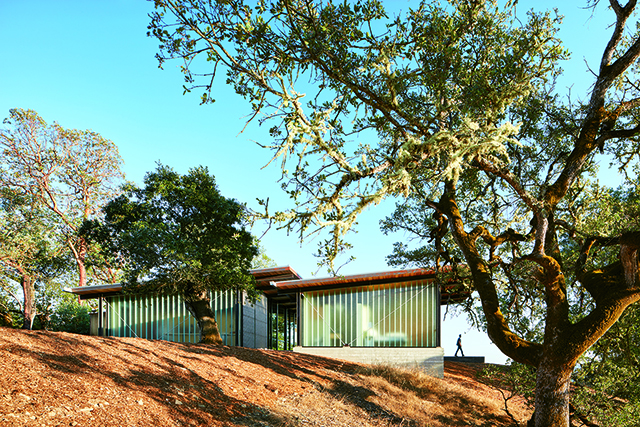 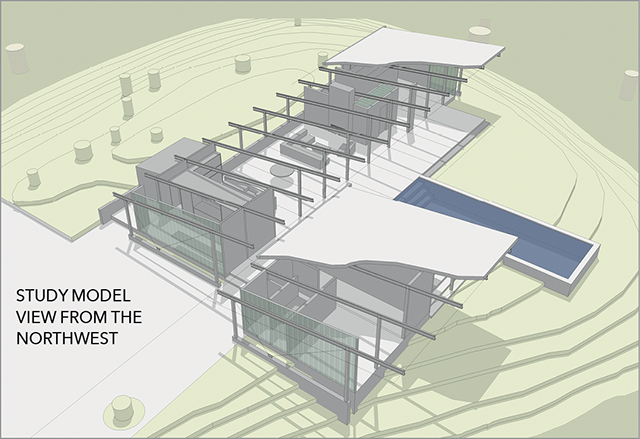 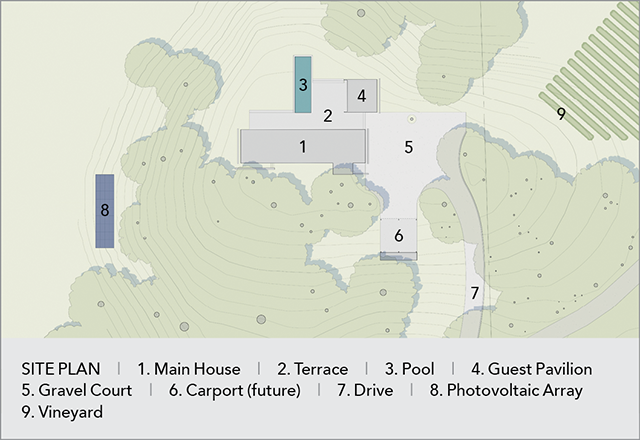 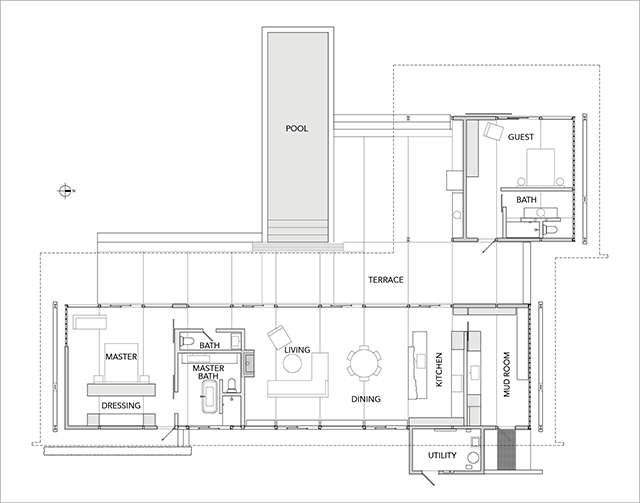