One of the beauties of a forest is that, to the creative eye, its scenery can be sliced and framed like a piece of abstract art. That’s precisely what’s going on at the Sooke 01 House, on a knoll in Vancouver Island’s coastal rainforest. This client, perhaps wisely, thought that the tree trunks of Douglas fir, Sitka spruce, and cedar were more interesting than a singular view of the ocean. So she and the architects at Campos Studio chose a spot for her house some distance from the water. The home’s splayed footprint offers up fractured views of the varied landscape. From inside, its composed scenes of tree trunks, mountains, rock outcrops, and the Pacific shoreline invite her to more fully grasp the essence of this place.

The commission grew out of a chance encounter. Firm principal Javier Campos crossed paths with the woman one day when they were both walking their dogs. “Our kids had played soccer together,” he says, joking that “our dog is earning his keep.” As they talked, he learned that the retired newspaper editor had decided to trade in her urban life for a more remote existence on Vancouver Island, about four hours and a boat ride northwest of the city. With her children grown, “she was looking for a change in lifestyle,” Javier says. “Living out on the coast is pretty spectacular; she took a chance and embraced it.”

She wasn’t the first person to buy this lot, but she was the first to keep it. Other owners were set on building a house right along the shoreline, which proved to be prohibitively expensive because of the rocks. This client, however, wanted to avoid an oceanfront house, and she and the design team camped out on the site to discover its nuances. Rising steeply from the road, the land crests at a clearing around a moss-covered outcrop, then drops gently to a rocky cove. “We kept gravitating to the knoll,” says project designer Czarina Ray. “It felt like the place you wanted to be, so we put the house right behind the knoll. It goes along with the idea that you should pick the best part of the site and leave it alone, or build in a way that you can make that good part better.”

Like many clients, the woman had a fairly straightforward idea about what the house would be. However, as they sussed out its relationship to the land, something different emerged. “We never set out to make an angular house,” Javier says. “What we said is, how do you want to live here? What should it feel like?” Knowing the house would be about 1,400 square feet, the questions were how to make it feel bigger and how to develop the experience of being in the forest. “It goes with our philosophy of anchoring architecture in its location,” Javier says. “You can’t move this house somewhere else.”

That led to the decision to deconstruct the box, so to speak, so each room has a quite different view. “You can move to an adjacent space and have a whole different psychological experience, which makes the house feel larger,” he says. 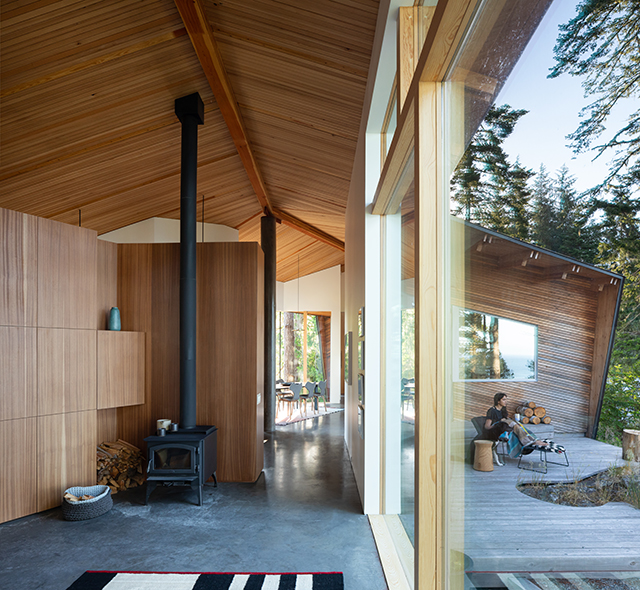 The resulting design is simple in plan but complex three-dimensionally. The owner’s suite and guest suite veer off on opposite sides of the house, with the living room, dining room, and kitchen wrapping around a south-facing mahogany deck that flows around the rock outcrop. Although there are neighbors, she can’t see them, so every room is free to face a different aspect of the landscape—mountains to the east, ocean to the west, and forest in between. “Because she’s there all the time, it was important to create all these different spaces for different parts of the day,” Czarina says. Each view became a carefully curated vignette—tree branches in one window, a close-up of a tree trunk on the way to the bedroom, or an ocean vista through the living room glass.

Metaphorically, the trees slip inside too. Structurally the house is organized around a central concrete column at the entry that echoes the diameter and size of the surrounding tree trunks. A fir glulam ridge beam branches off the column, creating a meandering spine. It supports the angled ceilings, which are made of thin strips of milled hemlock, a local wood that is darker and harder than cedar. Against the drywall, the wood reads as a warm shell that sometimes wraps down a wall, while the pattern evokes a canopy of conifer needles. Polished sapele mahogany millwork also lends a sense of warmth and comfort. It is used like furniture to divide some of the spaces without touching the ceiling. Radiant-heated concrete floors and a small wood-burning stove keep the house cozy in the winter.

Designing this far north was an opportunity to play with the character of light. “In summer the sun rises in the northeast and sets in the northwest,” Javier says. “In winter it goes from the southeast to the southwest and the angle is lower.” Windows fill the irregular void where the angled roof meets a canted wall. “There are no frivolous curves or angles,” he says. “When that void appears, the leftover shape is the window.” 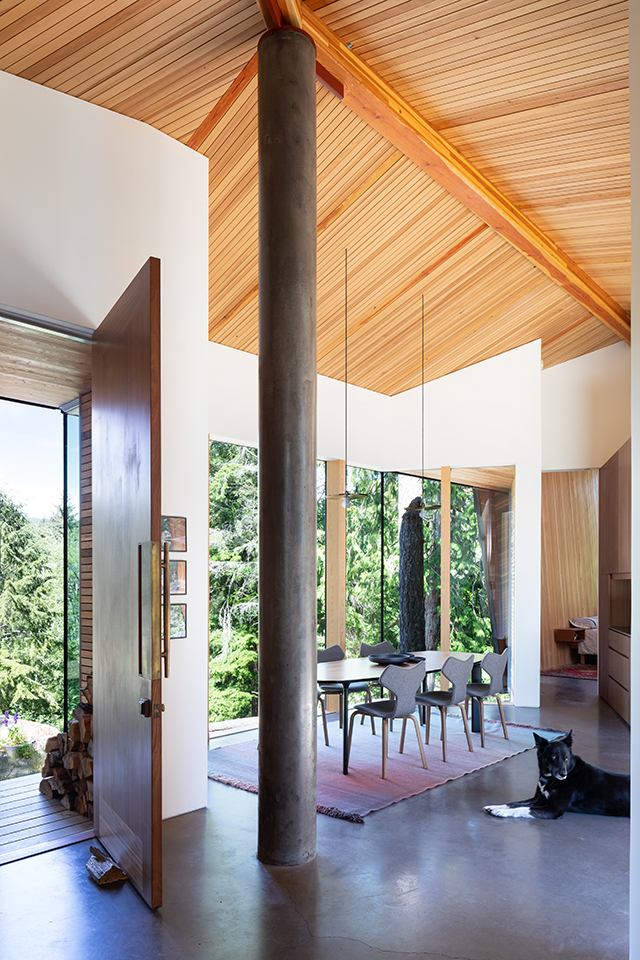 Fitting those window assemblies into seamless corners required precision from framing to finish, says builder Paul Clarkston, who executed the vocabulary that Campos Studio had specified. “It’s a Stradivarius of a house,” Paul says. “There were 27 elevation drawings, a new record.”

The house’s board-formed concrete base was tinted with a pigment that is close to the rock color, and a shade or two darker than the overcast winter skies. The upper part of the structure is essentially a metal shell lined with 1×2 clear cedar. In a dense forest, you don’t use skylights or gutters, Javier says—nothing you have to climb up and clean. Folds in the metal roof channel water to runoff points. While the angles in plan relate to the views and orientation, the roof folds were designed for shedding water.

“The house was complicated to build because of all the compound angles—angled roof meeting angled walls,” Javier says. “But with 3D technology, it’s so much easier to give the builder a drawing of each wall—start this wall at 10 feet and end at whatever. The roof is planar; it folds. Wherever it hits the walls there’s a straight line, but it will be higher at one end than the other.”

In this house, Campos Studio provided the owner and her dog with not just a new address, but a new experience, and one where every room in the house has the best view. “Several months after the house was finished, we called her about something and she told us she was opening a bottle of Champagne,” Javier says. “She was just celebrating the house.” 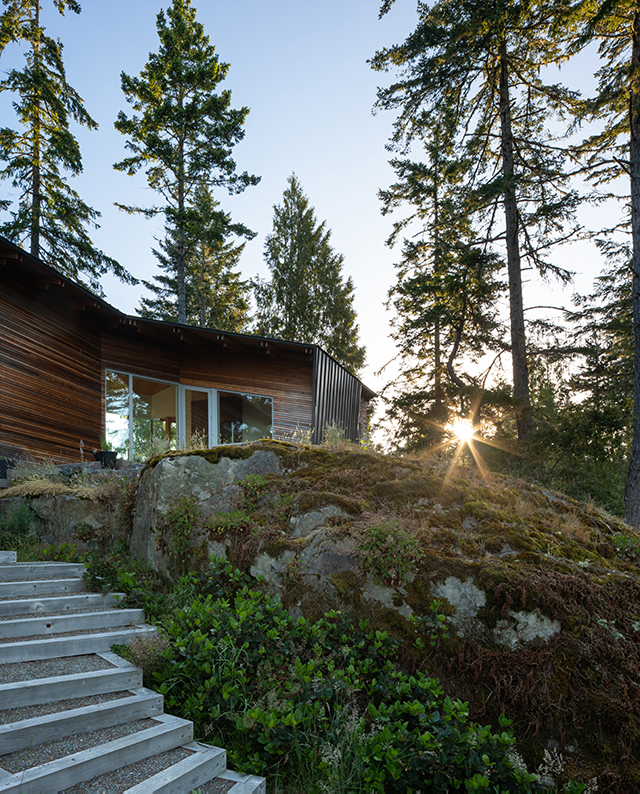 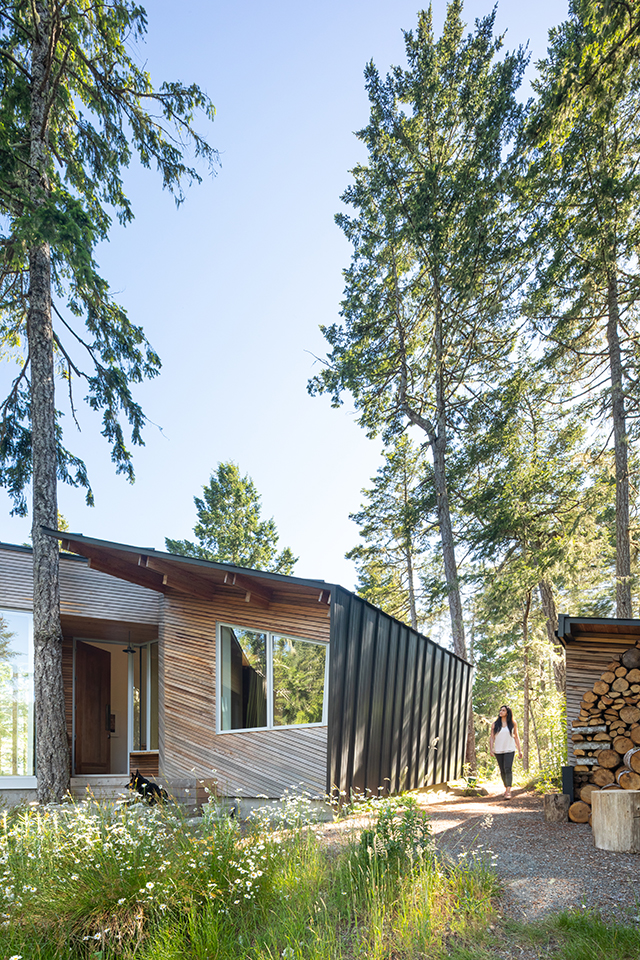 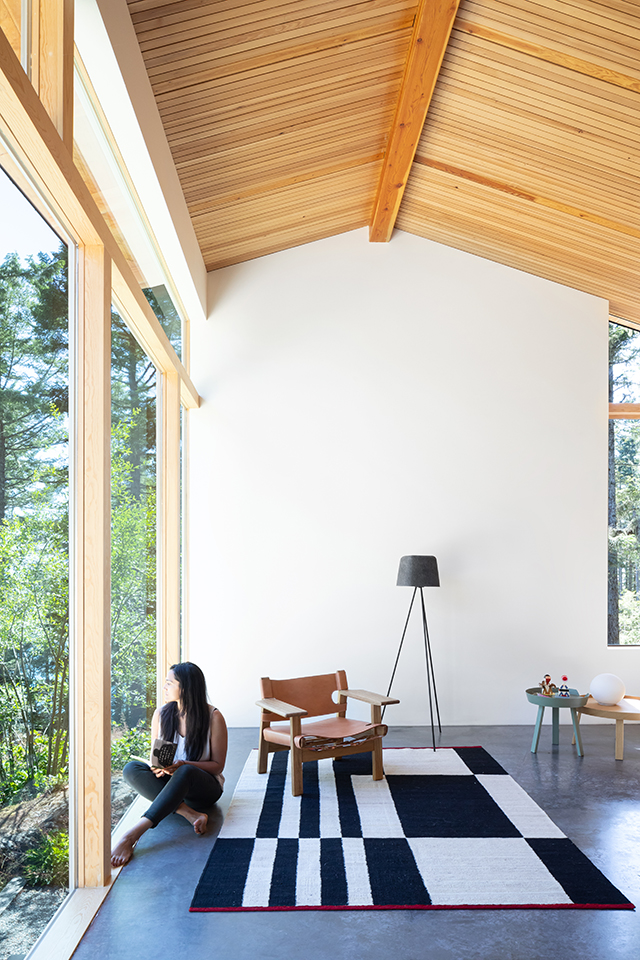 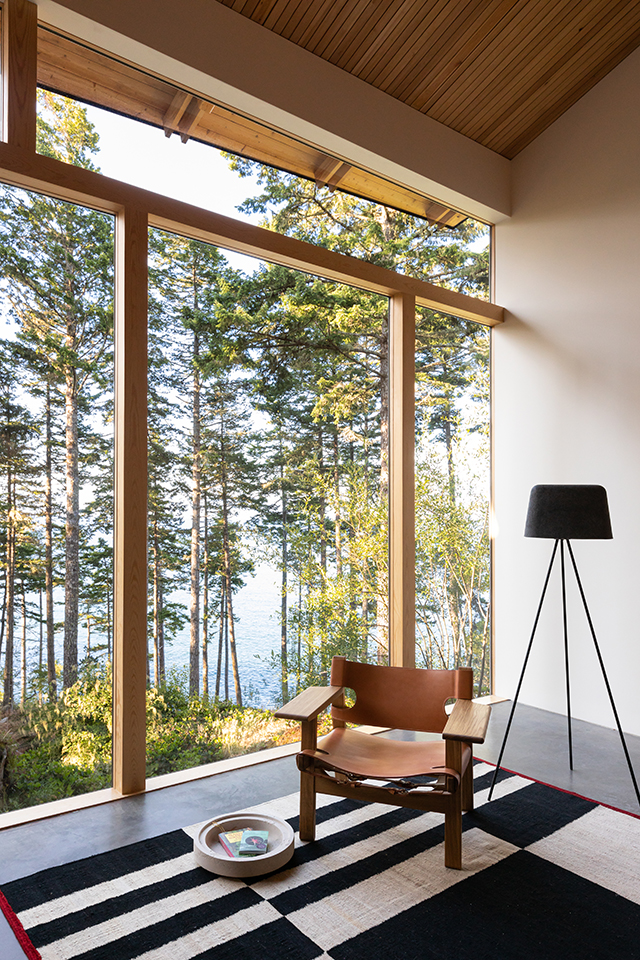 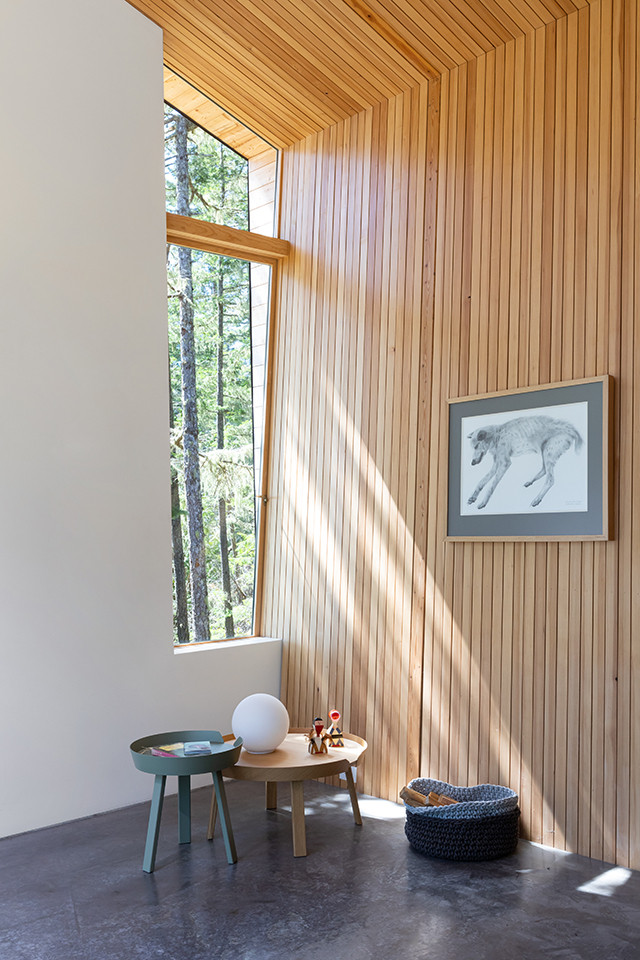 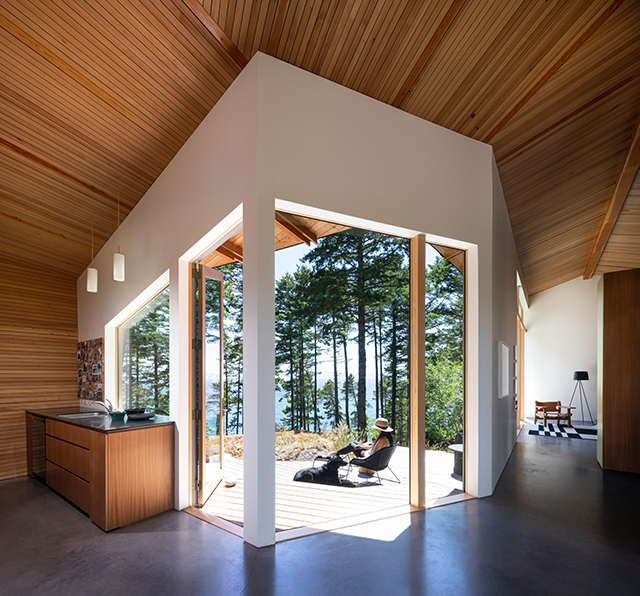 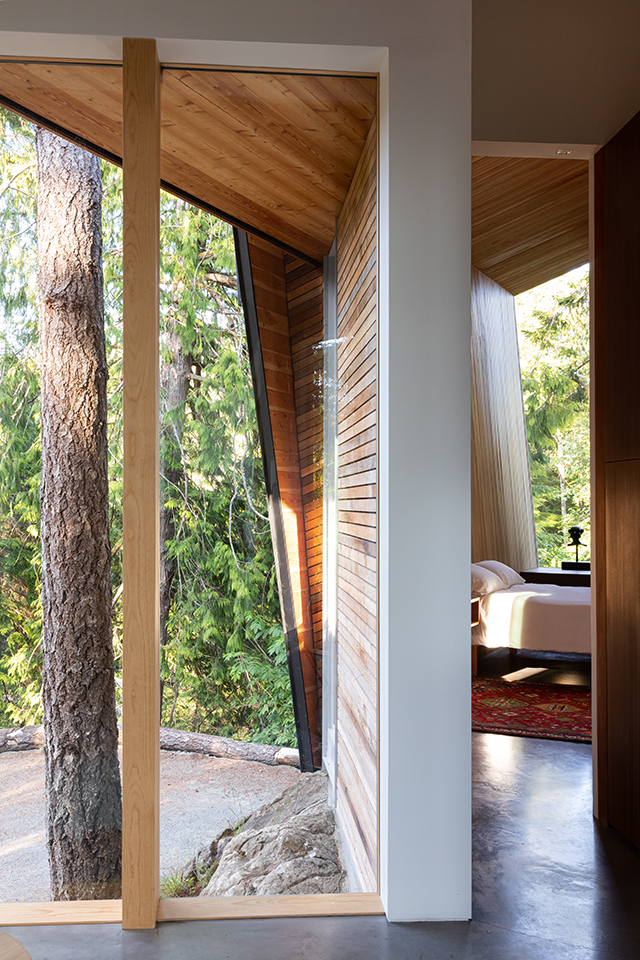 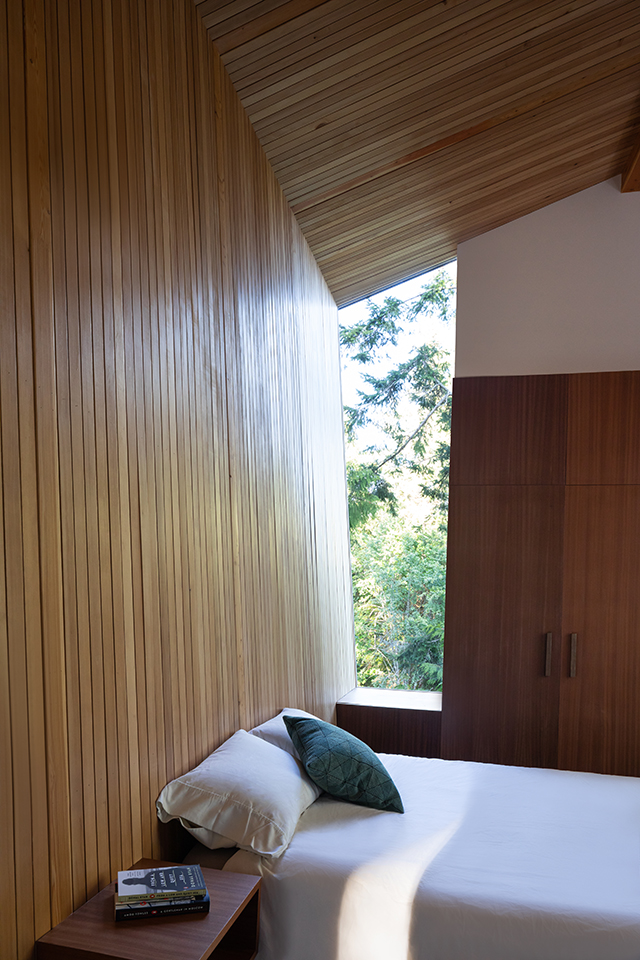 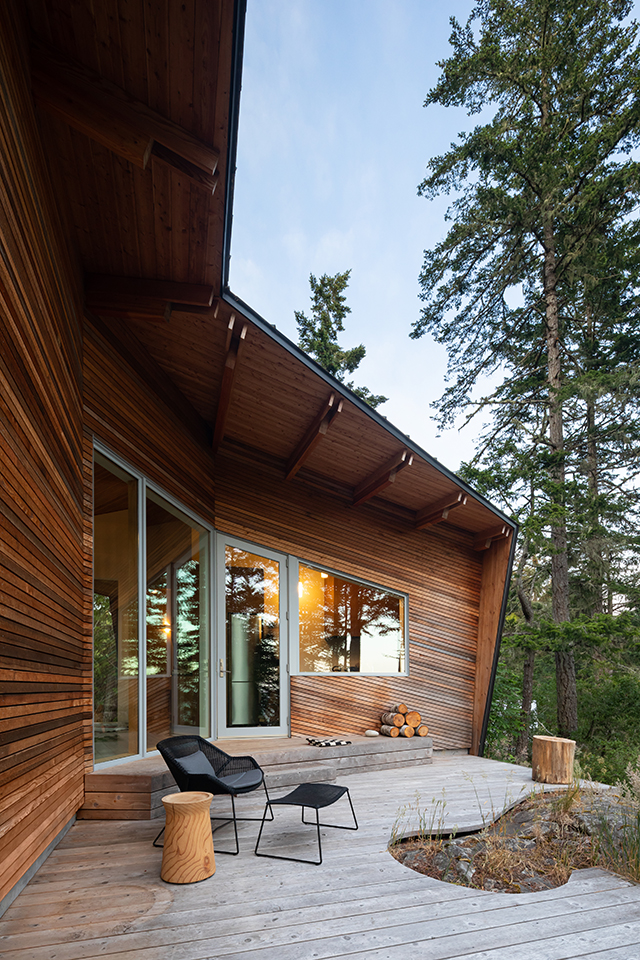 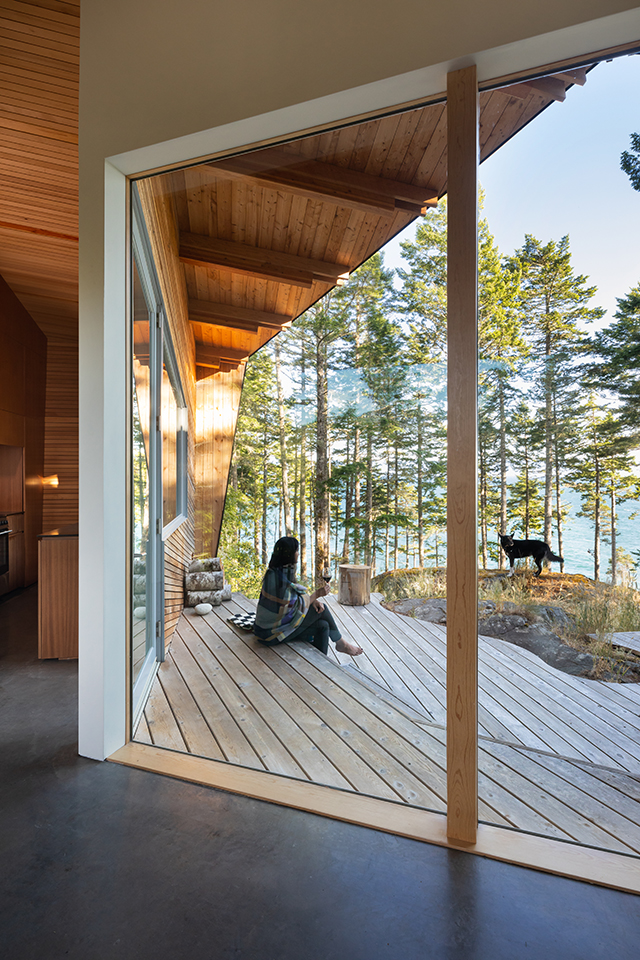 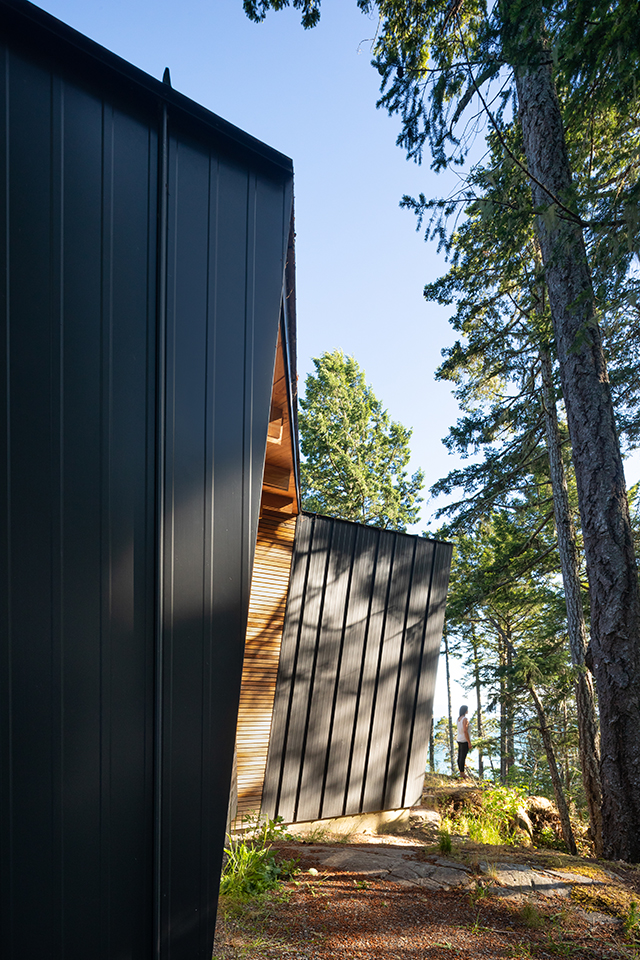 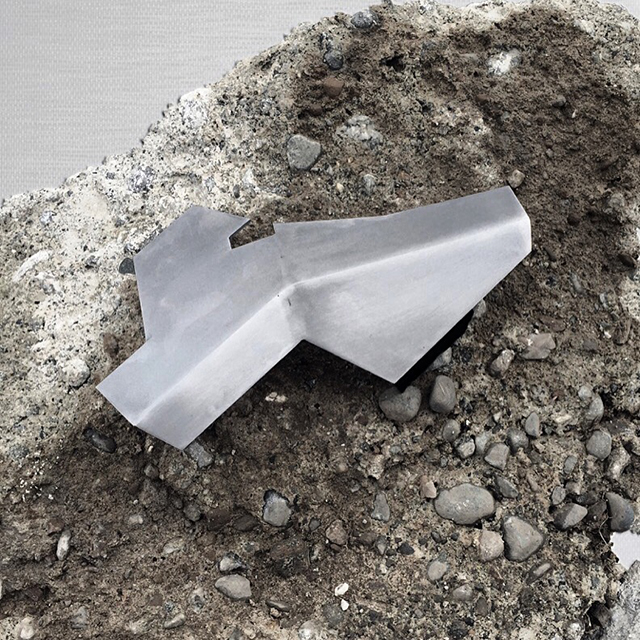 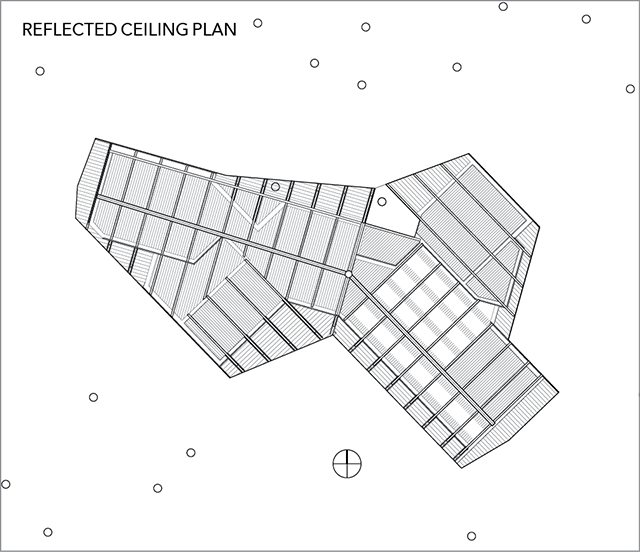 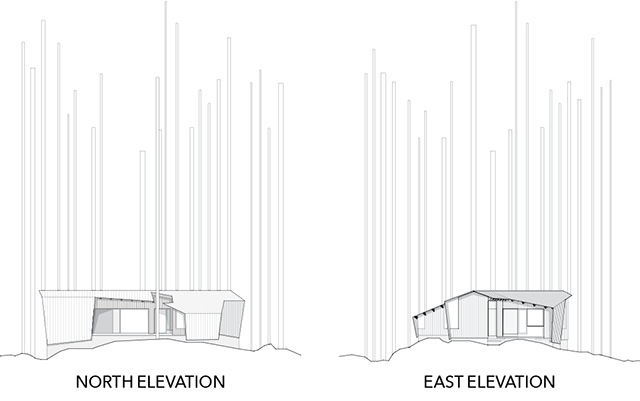 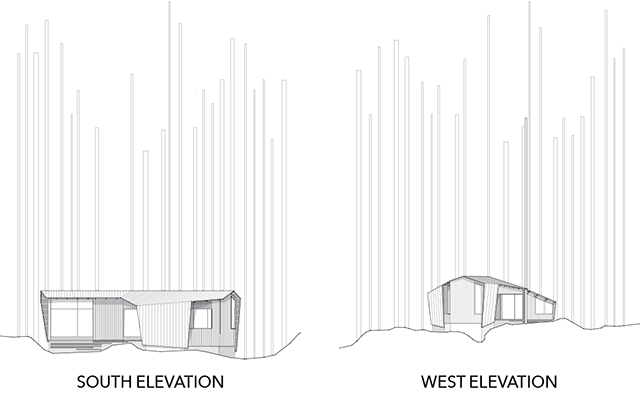 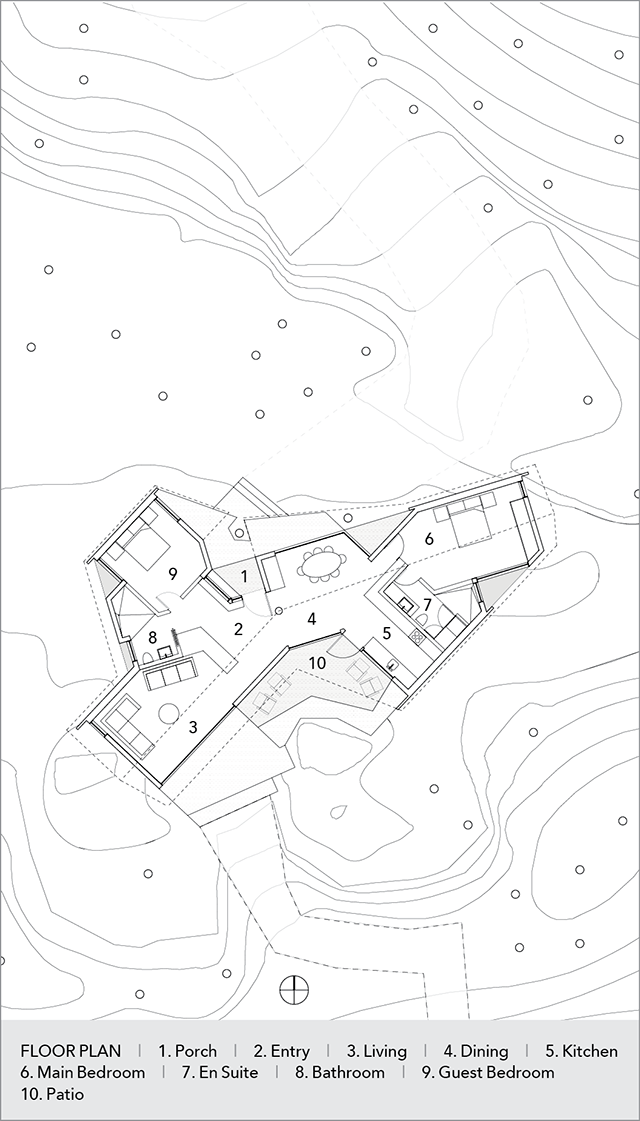