HMA2 Architects is known for its libraries and university buildings, yet many of the firm’s stated design principles apply just as aptly to houses, and the Sands Point Residence is a case in point. It makes “art out of sensible construction,” references history, and is the result of “a dialogue, not a soliloquy.” And while their institutional commissions have taken them up and down the East Coast and as far afield as the former Soviet Union, the Manhattan-based architects were no strangers to Sands Point, on a peninsula on Long Island’s North Shore. They had designed a nearby house for the parents of these clients, and were called on to continue the tradition for the couple, who have three daughters in high school and college.

This particular 2-acre lot held a 1970s house that didn’t engage the site, on a bluff with views up and down Long Island Sound. Starting from scratch allowed the architects to create a flexible, full-time family “resort” of sorts for the clients, who are very social. At 7,000 square feet, it’s a big house that is made domestic through the use of common materials, clever delineation of boundaries, and changes in scale.

HMA2 started sketching a design back in 2008, but it was put on hold until recently. By the time they reactivated the project, the clients had begun envisioning a more open house where they could entertain on a larger scale. “It was meant to feel like a vacation house every day,” says Henry Myerberg, FAIA. “They were interested in how to use the house as a frame to celebrate the setting.”

Spread out in front of the water, the resulting house has a cedar and glass skin protected by a shell-like metal roof that wraps down the taller wall on the west, where storms come from. This dynamic roofline helps to express the view and plays an active role in the life of the house. Sloping down toward the garage, it allowed for three levels of varying heights that create both grand and cocooned interior spaces. The roof pitch was also a nod to local precedent. “Traditional houses with pitched roofs are common in that area,” Henry says, “and so is the idea of having a low portion where the garage is located. This creates an attic space on the second floor, which is a den the daughters share. The roof then ascends higher with the [main] suite looking toward the sound.” 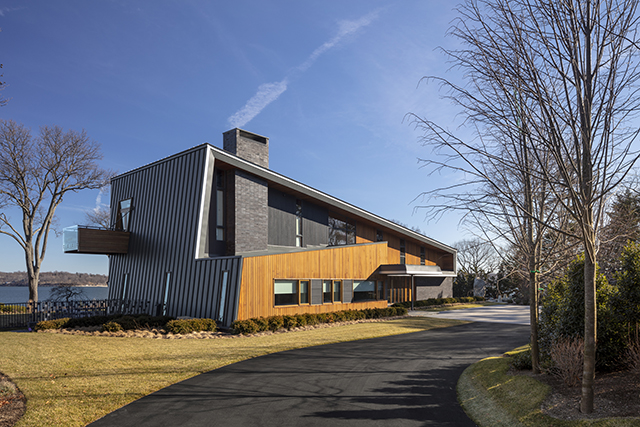 If the façade takes creative license with traditional design thinking, so does the interior, an updated center-hall floor plan. To take advantage of the site, Henry drew a glassy entry hall that aligns with an existing tree and a view of the water. There, a central stairway divides an elegantly proportioned living and dining room at the taller end of the house from an eat-in kitchen and pantry on the other. Making several turns on its way to the couple’s suite at the roof’s highest point, the stair reveals those shifting volumes as you move up. “It is meant to be this kinetic experience and a way of understanding how the house is organized,” Henry says.

The second-floor landing leads to the kids’ wing containing three bedrooms, two baths, a laundry, and a lounge. Half a flight up on the other side of the stairs is the couple’s suite. That move split the ceiling levels on the first floor, allowing the 20-by-36-foot living/dining room to have an airy 12-foot ceiling, while the kitchen under the bedroom wing is 9 feet tall.

The meandering staircase is also a platform for viewing the changing light. “The stairway faces east and west, so you can experience the sunrise and sunset,” Henry says. At night, LEDs on the white underside of each tread turn the structure into a lit chandelier. The stair treads to the lower level are covered in cork, a wink at the wine cellar at the bottom landing. And a few steps down is a “grotto,” or walk-out lounge that faces an existing pool, and a bedroom and bath, laundry, and exercise room. 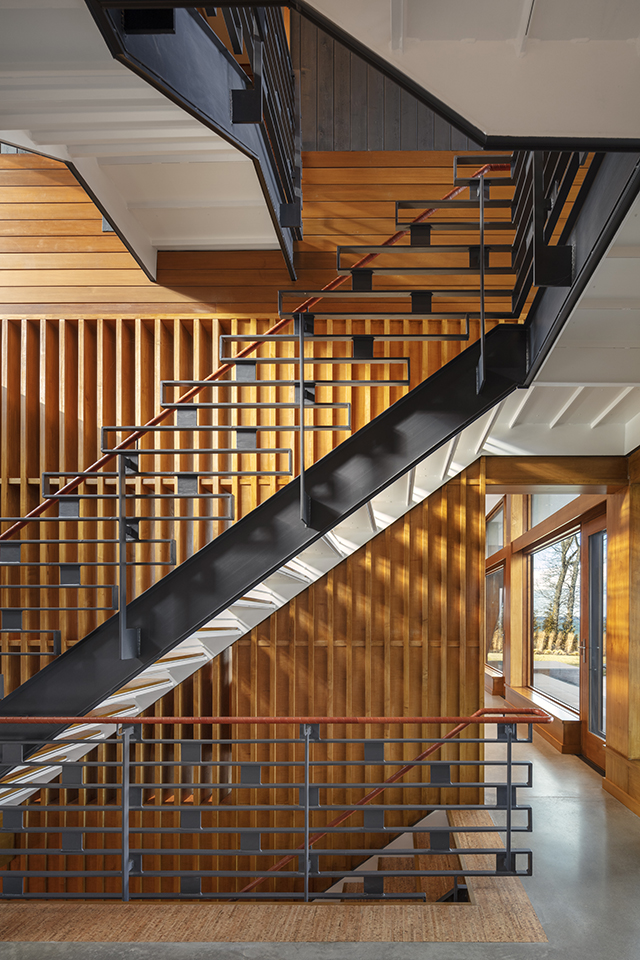 Convivial and welcoming, the interiors weave together expansive and contained spaces, and the thoughtful use of materials ensures that the larger rooms are humanly scaled. “The house has an Americana flavor because of the central stair and the hearth as a family destination, recalling some Frank Lloyd Wright philosophy in the way the house knits with the site,” Henry says. Beyond the tall living room, a lower-volume bump-out on the front of the house contains a TV room, bath, and guest room. With its own expressive dark metal roof, “it feels like a separate wing but is near the living space,” he says.

Natural, humble materials create a rich interior tapestry. The zigzagging steel staircase and patterned squares are an abstraction of the natural setting. “The welding joints are not ground smooth; it was not meant to look like anything other than the way it was put together,” he says. The metal stair handrail is wrapped in leather, and floors are radiant-heated concrete. Between the stairwell and living room, wood battens confer a familiar appeal, and were also used to hide the door to the den.

“We were trying to make an artful rationalization of the structure with off-the-shelf, crafted components,” Henry says. Dark, utility-grade Norman bricks and concrete masonry units form the fireplace wall and mantel. The elongated bricks emphasize the horizontality of the sky and water, and a granite seat wraps all the way around it. “There’s this idea of wrapping to feel contained,” Henry says. “You’re in this large space but have layers of containment. That’s picked up on the outside of the house with the wrapping roof shape—making grand elements feel contained and intimate. Cedar wallboards, installed with a small V-groove, also lend a cozy vibe within the larger space. 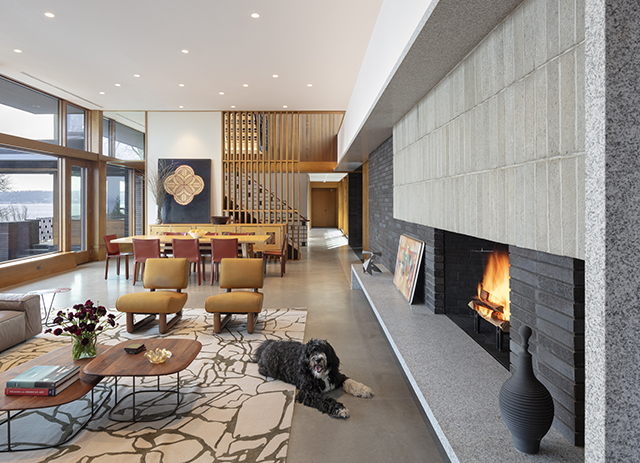 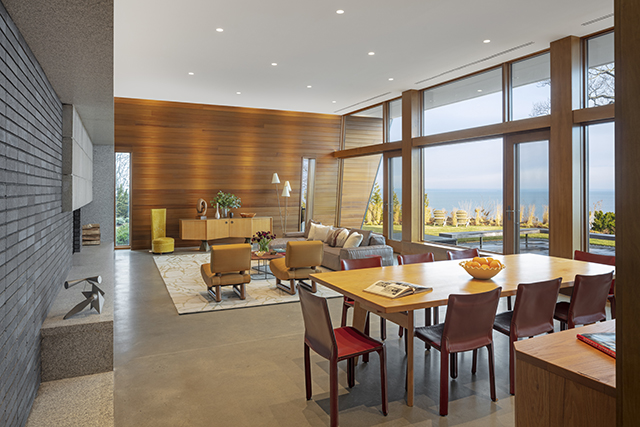 The house reaches beyond its shell to commune with the outdoors. Brick and cedar wall surfaces run freely between inside and out, and white ceilings extend to the roof soffits. The kitchen and living area open to a terrace, where a skylit porch shelters an outdoor kitchen. It’s a powerful invitation to step out and enjoy the view, and so is the cantilevered balcony that thrusts out of the couple’s bedroom wall. “There’s this walk-the-plank moment coming out of the bedroom, with a glass terrace that looks down to the sound,” Henry says. “It follows the way the water bends around the peninsula there.”

Similarly, in elevation the rooflines loosely echo the way the water channel widens as it passes the house. The steel-framed structure was constructed with eight 12-foot modules, “super-rationalized and simplified,” Henry says. “To get the free-flowing roof, the frame had to be braced to keep it from wracking. Every 12 feet in the bedroom wing is a brace.” In one room it’s part of a built-in desk, revealing how the house is made.

“The house reflects a lot of things I learned over the years, many of them from Sal,” says Henry, referring to Sal Spezio, who also built the couple’s parents’ house. Here he devised a system of slits with custom troughs behind them to distribute heated or cooled air, so there are no visible registers. He also worked out a series of plate steel gussets to suspend and level a 2 1/2-inch-thick granite slab that starts in the foyer and wraps high above the fireplace. This type of element reoccurs on the Corian in the couple’s bath. “Once again, we had this sweeping, continuous piece of material that had to float,” Sal says. It wraps three sides of the wall-mounted vanity and becomes a seat that pierces the shower wall, then runs vertically up the wall and across the ceiling, where it holds the pendant lighting. “We installed lighting behind and on top of it,” Sal says. “There is a tremendous amount of accent lighting inside and outside.”

Henry says that as a firm specializing in educational buildings, “our driving aspect is how to create environments that bring people together.” This attentive architecture creates a place where friends and family feel welcome, and where the owners are free to be themselves. “It’s their personality on display here,” he says. 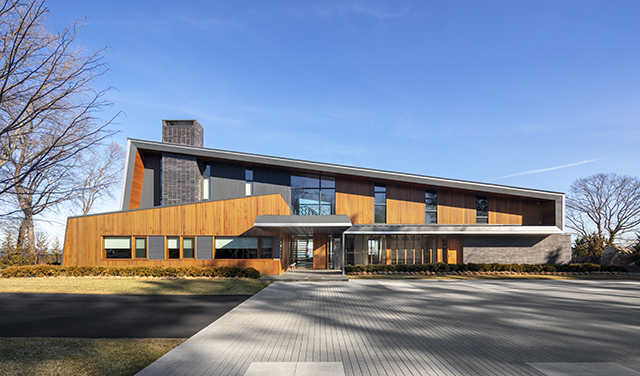 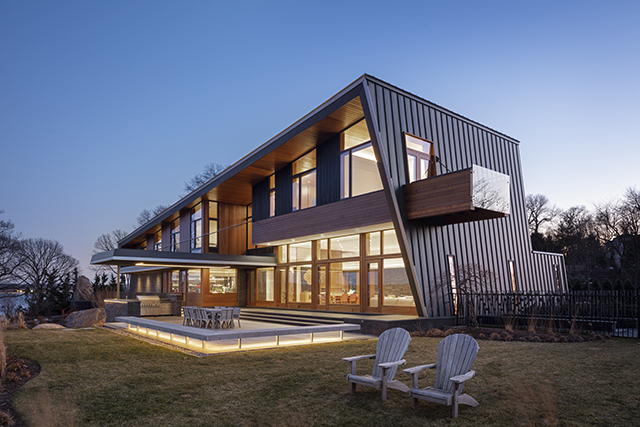 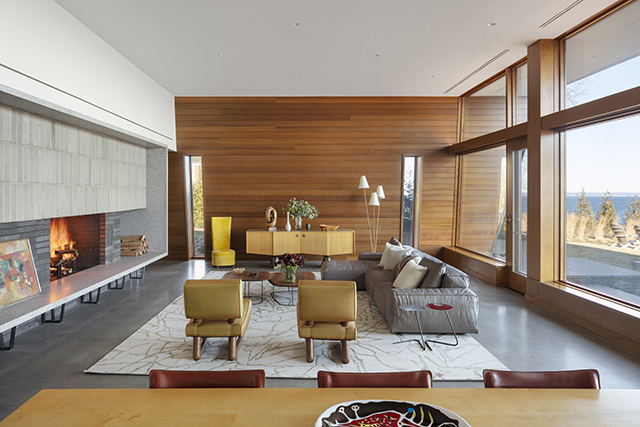 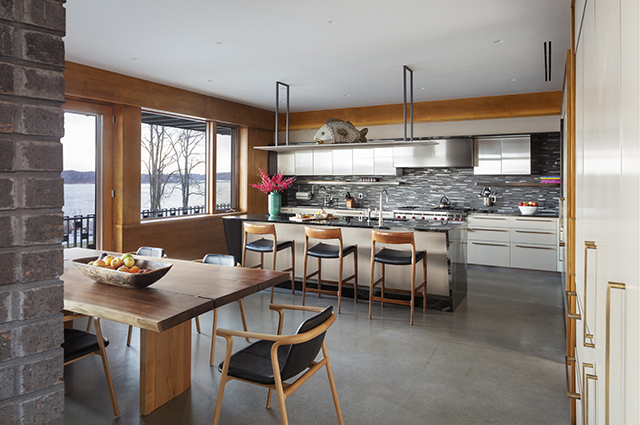 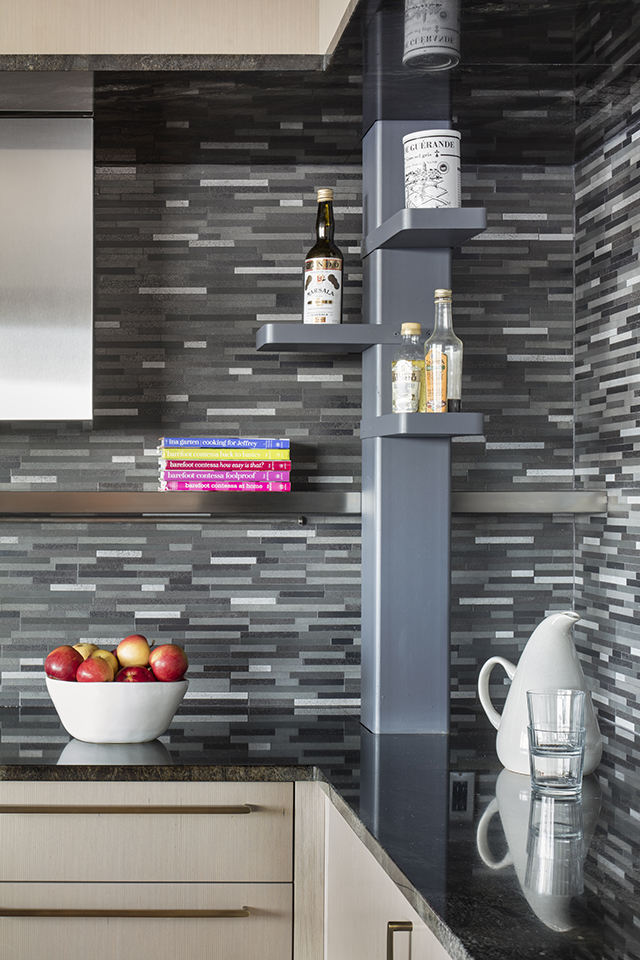 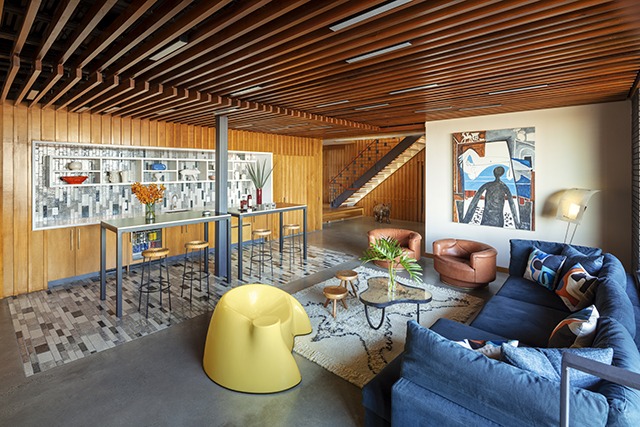 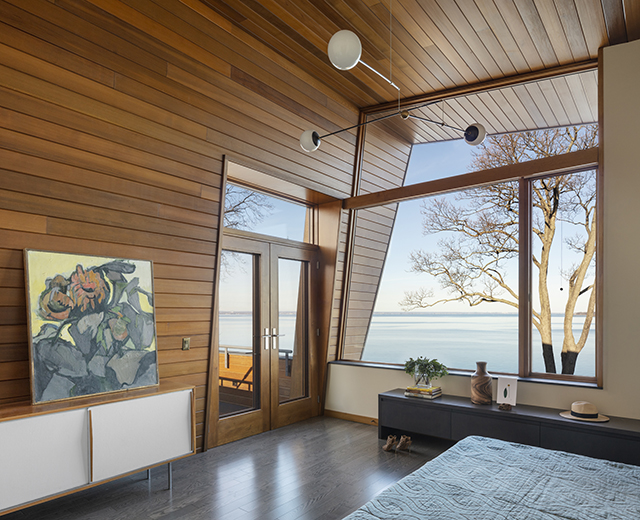 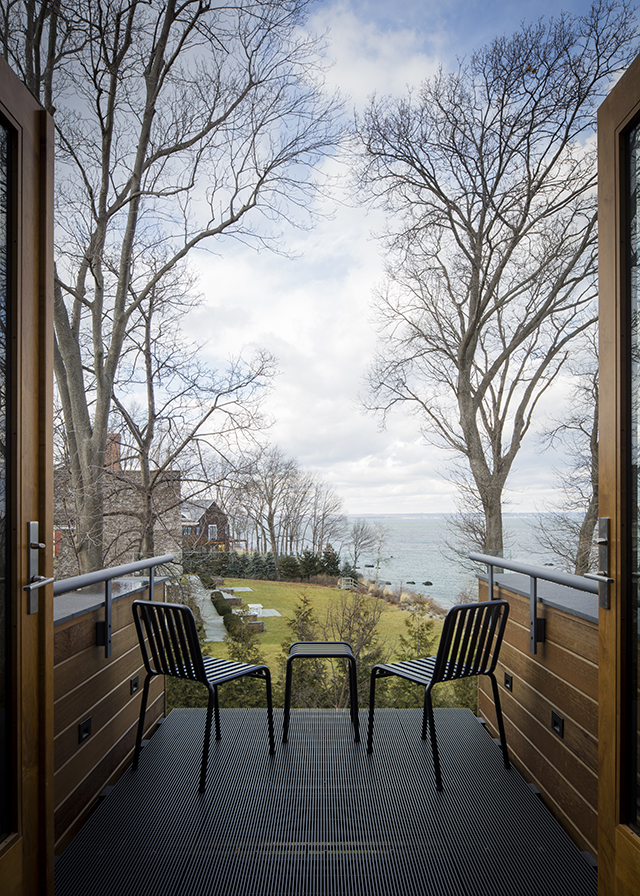 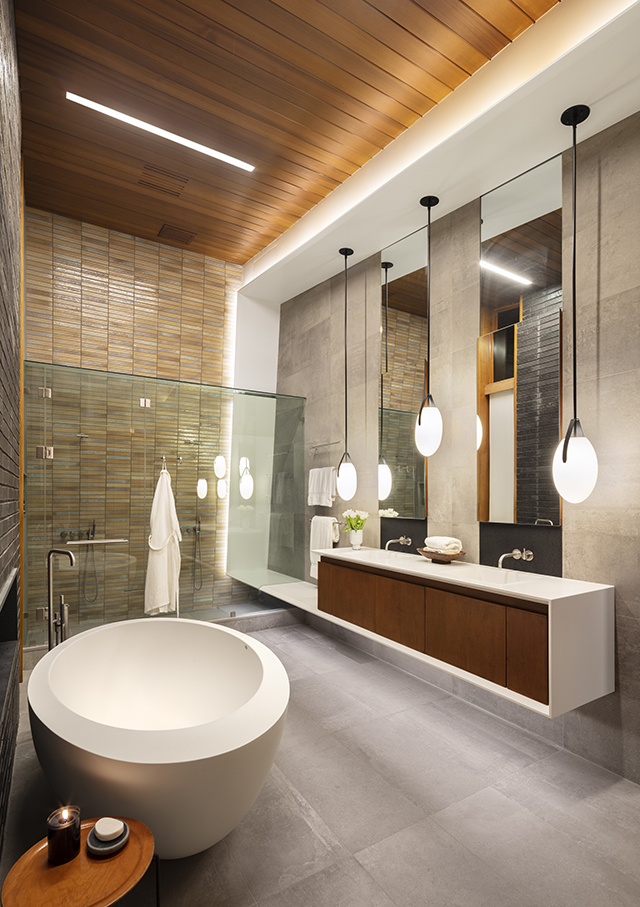 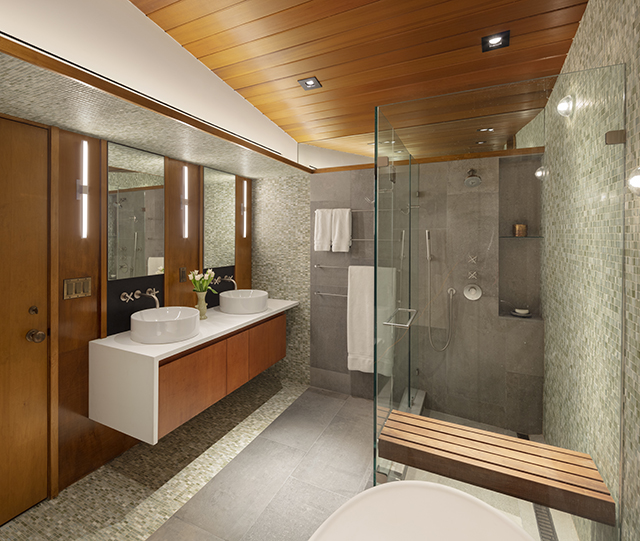 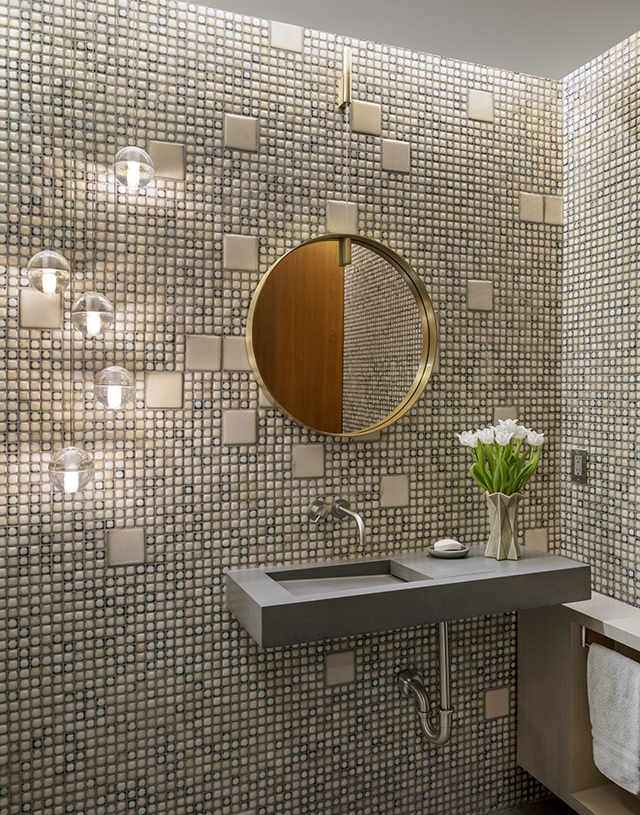 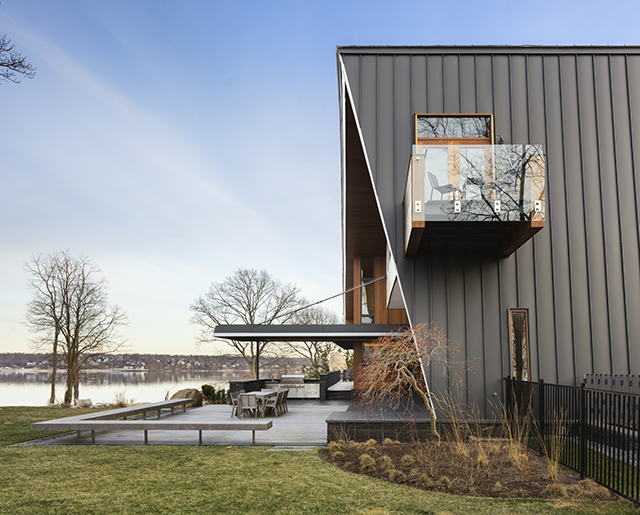 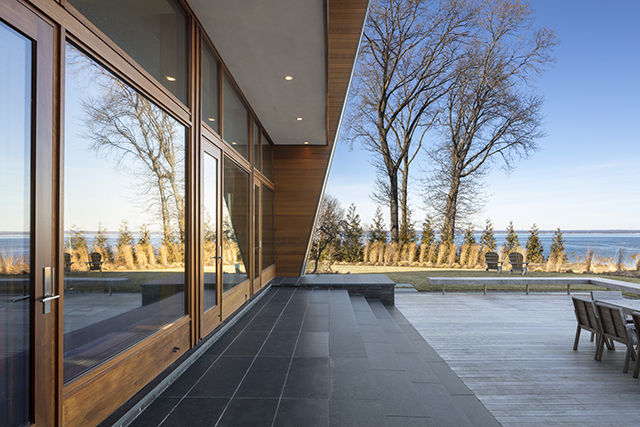 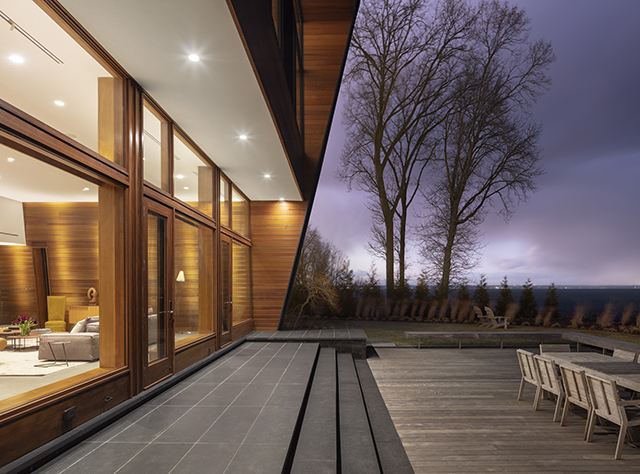 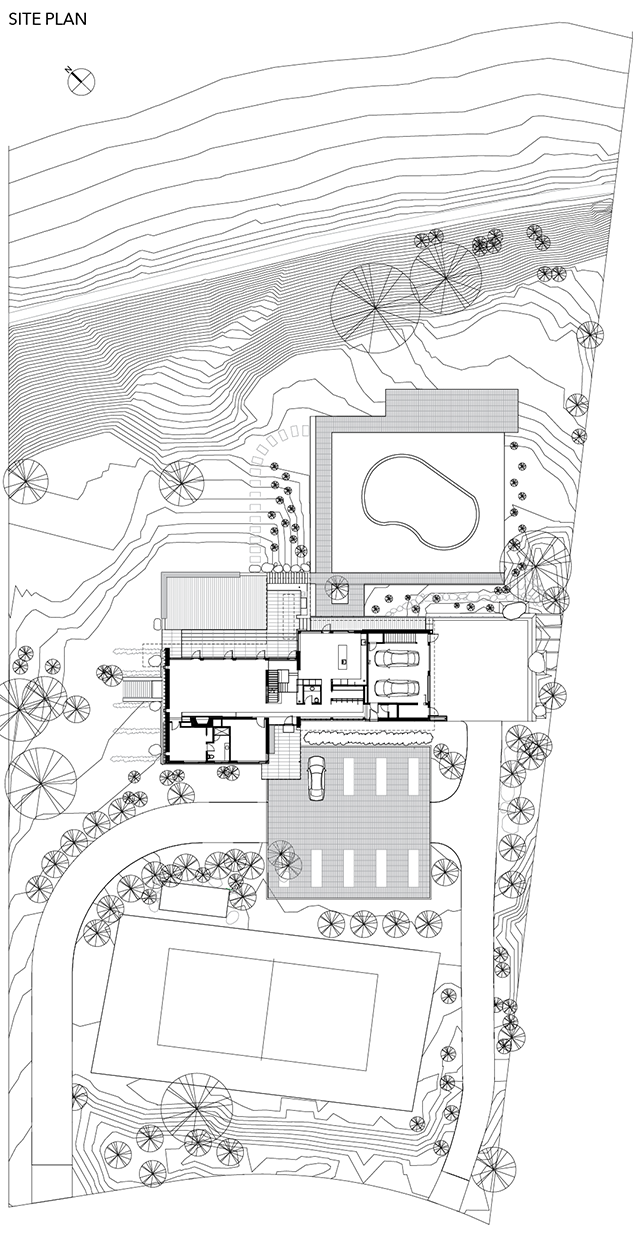 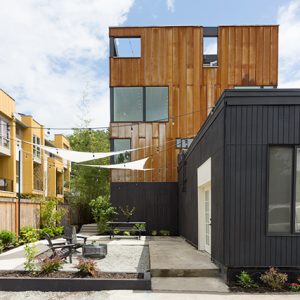 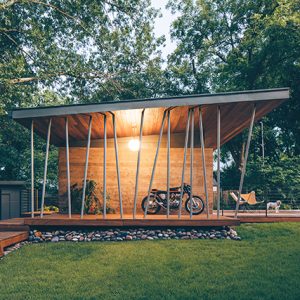 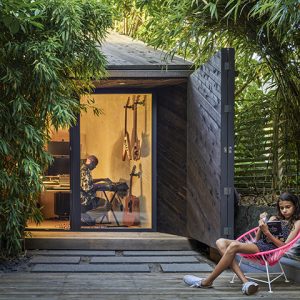 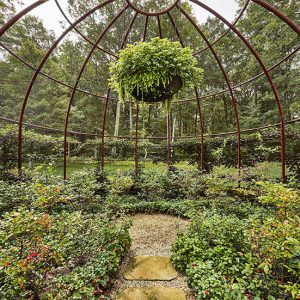 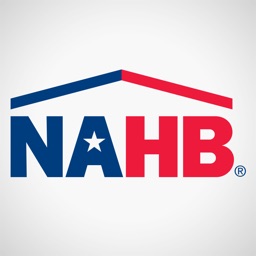 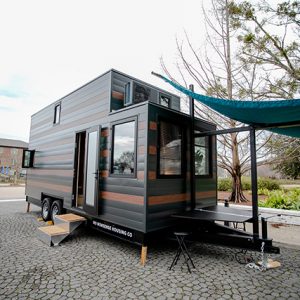