Article, CASE STUDIES, URBAN
January 9, 2020
by
Warning: foreach() argument must be of type array|object, bool given in /home/customer/www/residentialdesignmagazine.com/public_html/wp-content/themes/thevoux-wp-child/inc/templates/single/style5.php on line 30

From one side, this terraced house looks as if it grew from the steep green slope on which it stands. From the other, it seems to float above it, a pavilion on a scrubby perch. Large yet eminently livable, the Pacific Palisades House is a case study for the way design can be used to connect a new building—even a sprawling 14,500 square feet—to its surroundings. And rather than overshadowing its environment, it harbors green spaces that nurture the family of five.

Granted, the site’s qualities are pretty compelling. The property abuts Topanga State Park on the north, while the east side overlooks Los Liones Canyon and to the south is a view of the Santa Monica shoreline. However, the 2-acre parcel is also in a landslide zone. ShubinDonaldson partners Russell Shubin, AIA, and Robin Donaldson, AIA, took these conditions in stride when they began to site it, along with a 2,500-square-foot accessory building that contains guest quarters and a gym and spa.

Usually it’s deemed smarter to set houses below the crest of a hill, where they are less vulnerable to catastrophic storms and can relate more directly to the land. That was originally the idea here. In planning, however, the design team realized that the lower the house sat on the hill, the less one could appreciate its one-of-a-kind view. Pushing it up the hill against the northwest property line also allowed for cross-ventilating ocean breezes. Even so, it’s hard to spot this terraced residence from across the canyon, Russell says, not only because of the materials and massing but because the roof is partly camouflaged by a planted courtyard buried in the middle of the second floor. “It’s an extension of the park,” he says. “The idea is that the park continues through the house and the site opens to the ocean view on the south.”

Set on a deep pile foundation to fortify the hillside, the house’s axial geometries respond to the land’s contours. The west façade sits against the hill and reads as a one-story building, falling away on the opposite side. “We wanted to keep it low so as not to obstruct the neighbors’ views,” Russell says. On the first floor, the kitchen, dining room, living room, and family room unfurl at a slight angle along the main north-south axis, wrapping around the large, integrated garage on the west. The one-room-deep spaces radiate around the views: A guest bedroom faces the park on the north, while the kitchen and living room flow out through vast slide-and-stack doors to a south patio outfitted with a dining area, fire pit, and infinity pool. Below the house’s main axis to the east, terraced concrete retaining walls contain a kitchen garden filled with fruit trees and vegetables. And nestled into the hillside below the pool patio, the two-story accessory building further reinforces the slope, stepping out to a play court and an existing grove of trees at the bottom of the property.

Despite the monolithic white stone exterior, the building’s bones set up a pattern that modulates the scale and settles it into the slope. Glass curtain walls and slatted ipe screens alternate with split-cut limestone slabs as they march around the house. The slabs are further refined with thin vertical joints—metal plates that protrude a half inch from the surface, adding a sense of rhythm. “The building doesn’t feel like a solid mass,” Russell says. “The wood slats add layering. They open with the touch of a button and modulate the light. At night the house is a glowing lantern.” 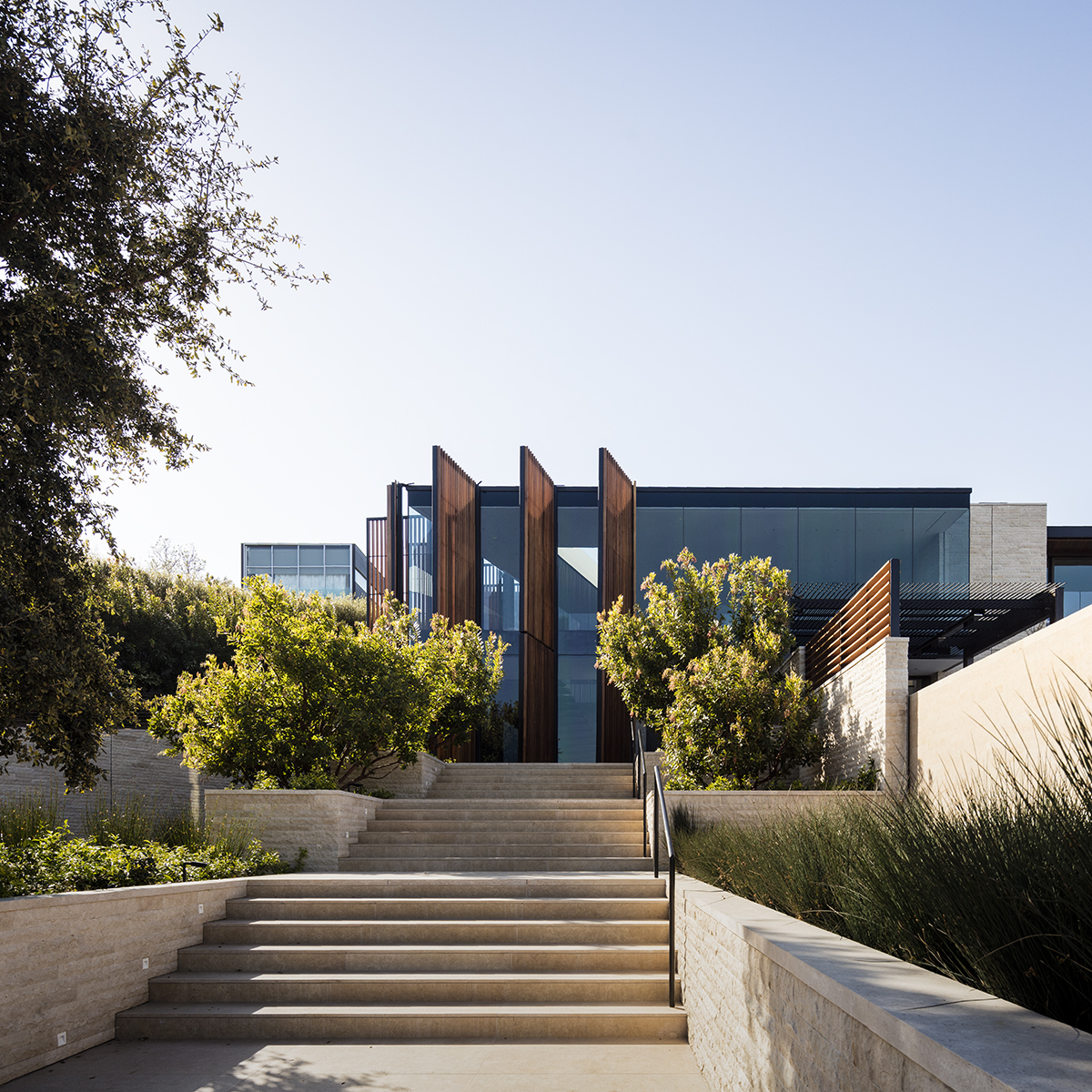 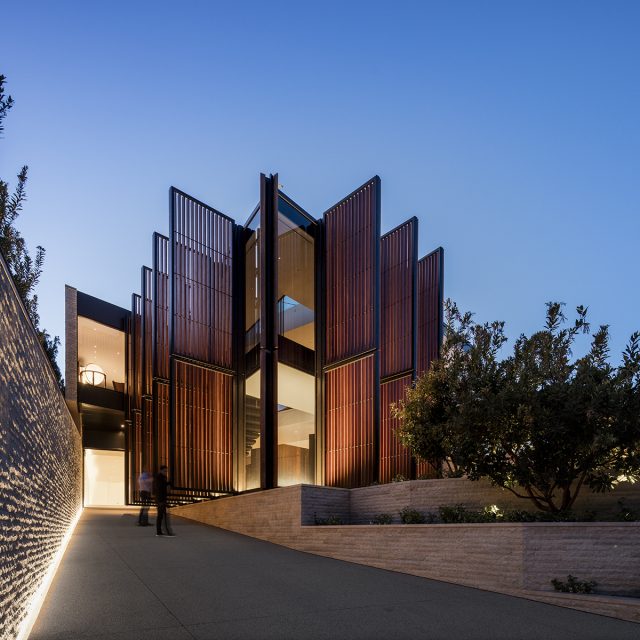 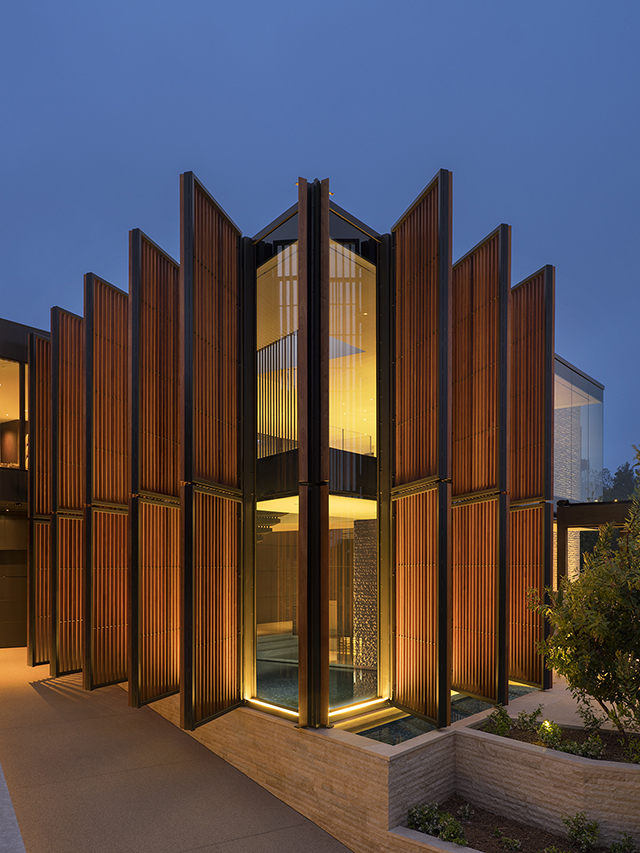 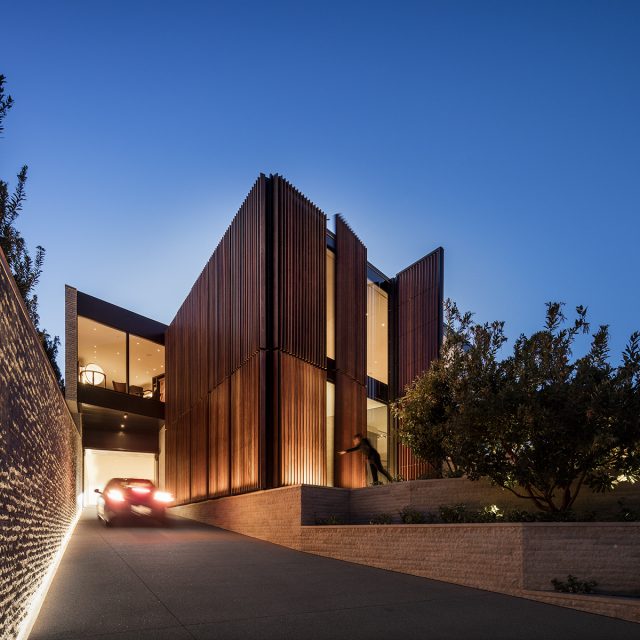 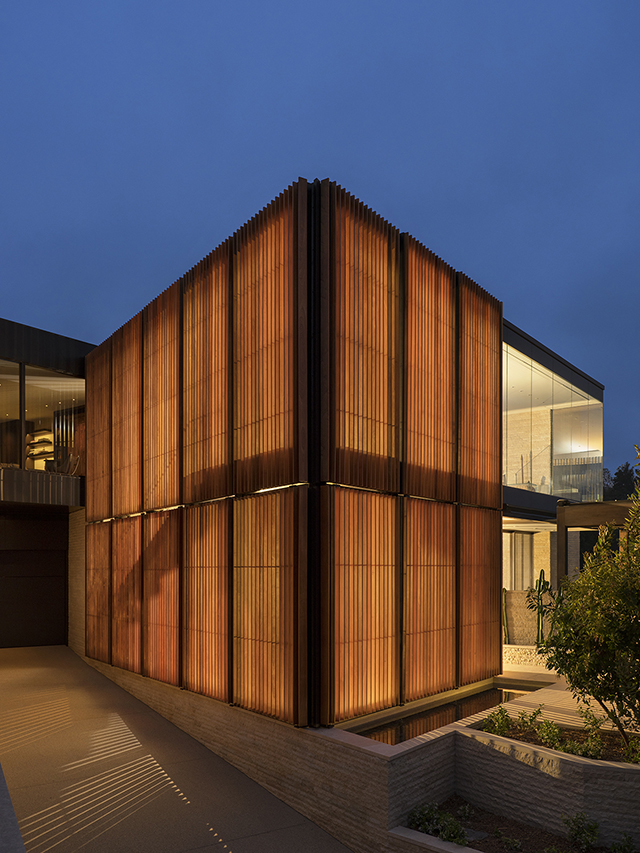 Visitors approaching the house can park along the wide driveway and follow a terraced walkway to the front door. Or they can take a more scenic route that starts at the lower edge of the property, where many of the 200 new olive trees were planted. There, a landscaped oval showcases a specimen California live oak on an axis that steps up toward the house along a water runnel. This path lands on the lower side of the pool before continuing on to the front entry. “It encourages people to experience the site,” Russell says.

The design team intuited the house’s physicality too—not just how it looks but how one moves through it, what it feels like, and the quality of light and air in each room. Two-story-tall vertical louvers add drama to the façade’s triangulated corner at the main entry. Mocked up on-site to assess their performance, the ipe screens can be mechanically closed to shade the southern exposure or opened to the view.

To the left of the front door, a small outdoor reflecting pool seems to slip inside, where its sharp angles track the inner corner of the house façade and are mirrored by a triangular skylight directly above. There, a sapele mahogany staircase rises over the water to a mezzanine bridge that overlooks the outdoor pool terrace. “There’s a strong volume of space when you turn the corner and go up the stair,” Russell says. “The stair is not separate but a spatially distinct space, which volumetrically flows into the upper area.”

At the opposite corner of the house is a similarly shaped sunken family room. Its 15-foot-tall glass wall creates an almost cathedral-like negative space at the corner. “It feels like it’s engaging down into the side of the park, and you also feel like you’re stepping down into the orchard,” Russell says.

Formal and informal moves invite the family to connect to the environment and each other. The reflecting pool provides evaporative cooling, while the flow of the land directs sea breezes toward the building and large openings draw air through the house. Because the rooms wrap three sides of the garage on both floors, they all get plenty of natural light. In addition to the wood screens, large overhangs and exterior trellises help to shade the interiors.

Even the garage is naturally bright, despite being hemmed in on all sides. Four translucent ceiling apertures funnel sunlight from the magical courtyard garden that sits directly on top of the garage, as though dropped in through the roof.

“We think of the roof as another elevation—the drone view,” Russell says. “We call that green area the mountain range.” No doubt its olive trees and sinuous grassy mound are irresistible to the three youngsters, all born during the nearly five years it took to design and build the house. Surrounded by five bedrooms, a library, and a playroom, the central courtyard invites them to play outdoors unsupervised. In fact, stacking slider doors open the entire play area to the garden.

“It’s all about controlled apertures, responding to the contours and property line to create views and privacy,” Russell says, “and leveraging every part of the site and 270-degree view.”

Builder Jim Schram gamely overcame complicated technical challenges to achieve these goals. Constructing the second-floor garden involved installing a drain on the surface and subdrainage in a gravel bed underneath. “The trees were a mammoth undertaking because of the weight and the need to create pop-down holes in the deck to receive them,” Jim says.  “We all got together to discuss what the requirements were for drainage and the depth of soil around the root ball.”

Nevertheless, the installation was a lesson in trial and error. Ipe was put down with a drainage medium and waterproofing underneath, but the drainage medium retained water. “When it rained or the decks were washed down, the water wasn’t just flowing onto the waterproofing and drying out,” Jim says. “It created a hyper-humid environment that started to cup the boards.” The solution was to replace the ipe with a synthetic material and remove the drainage mat. “This is typical of the cross-disciplinary problems you run into,” Jim says. “The waterproofing consultant did everything right in terms of best application, but we weren’t looking at the whole picture.” Rainwater is channeled to the site drainage for the house, and any overflow dissipates through trench drains in the garage. 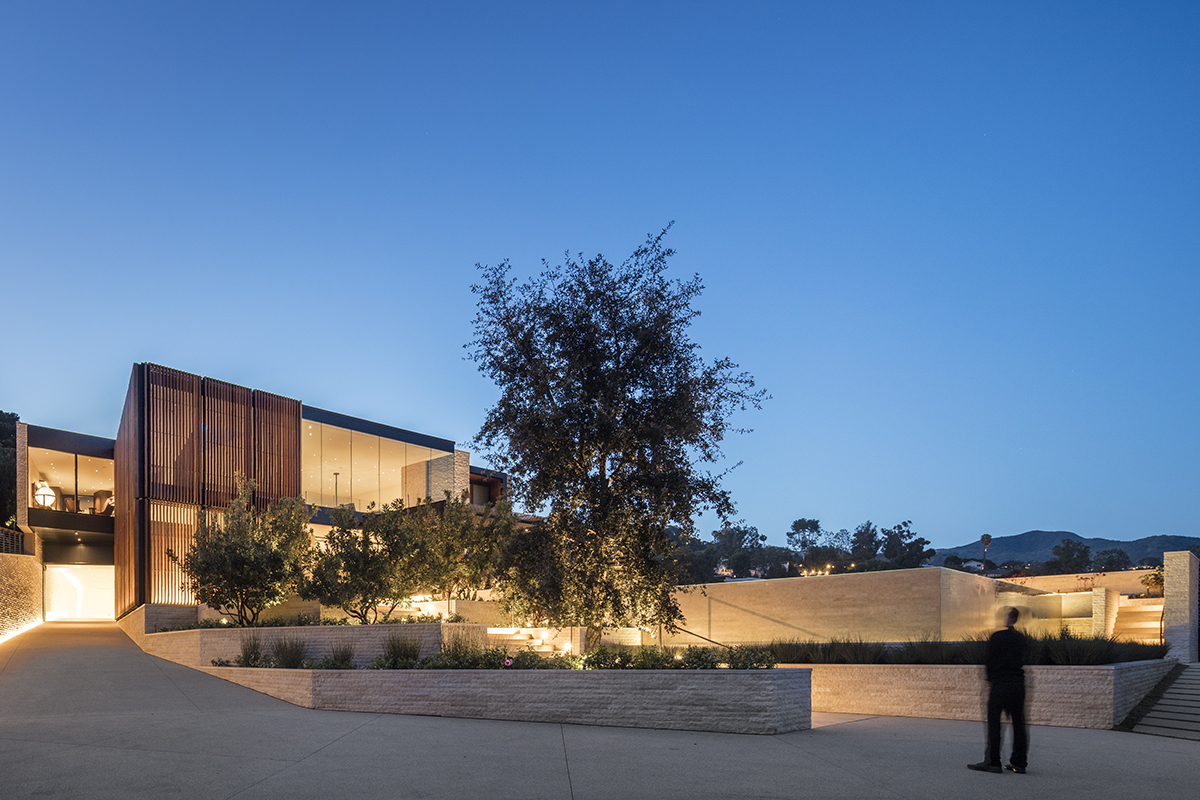 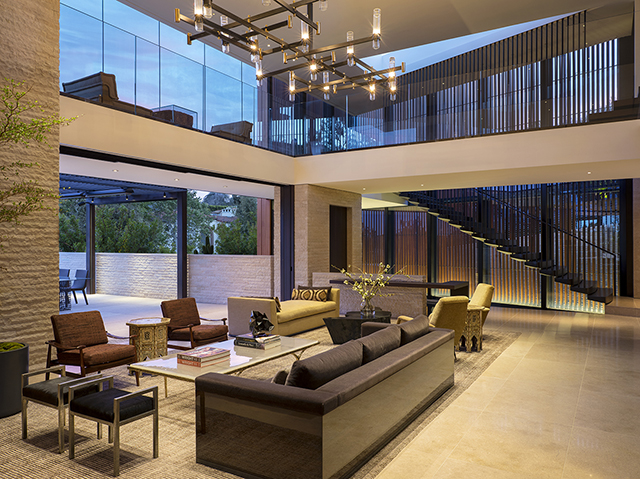 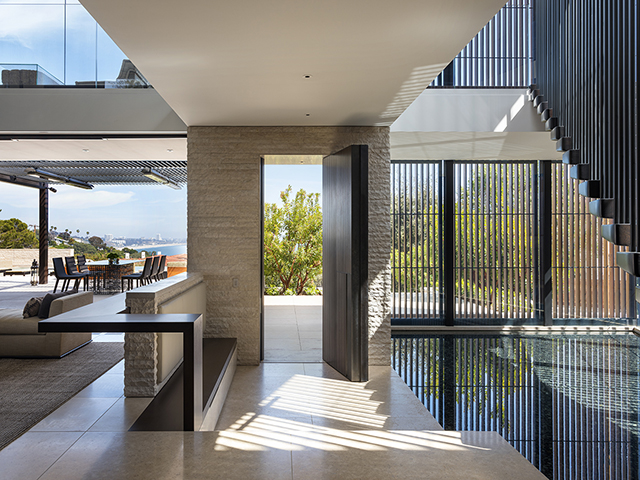 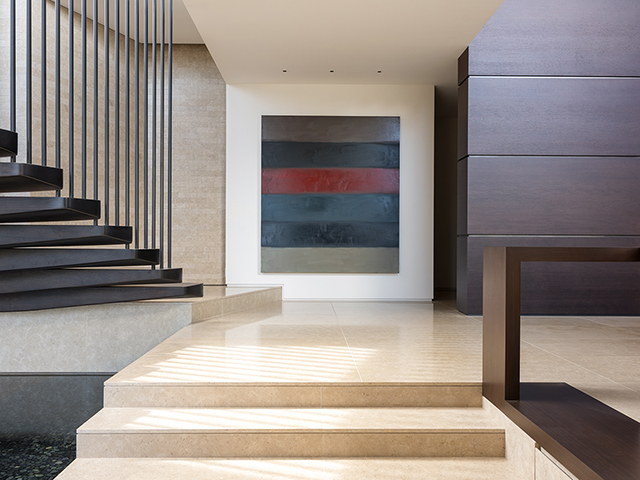 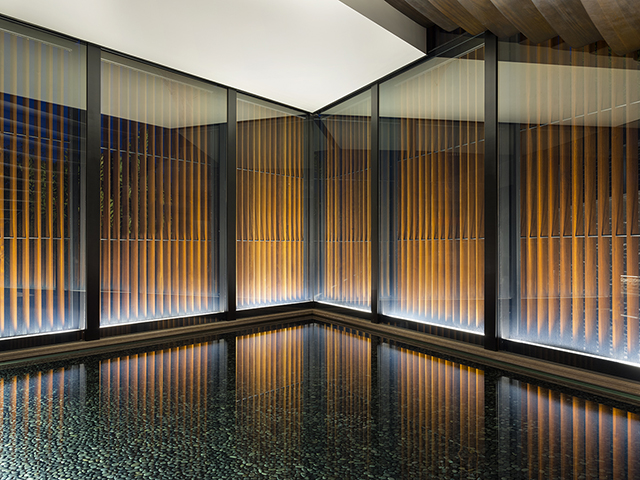 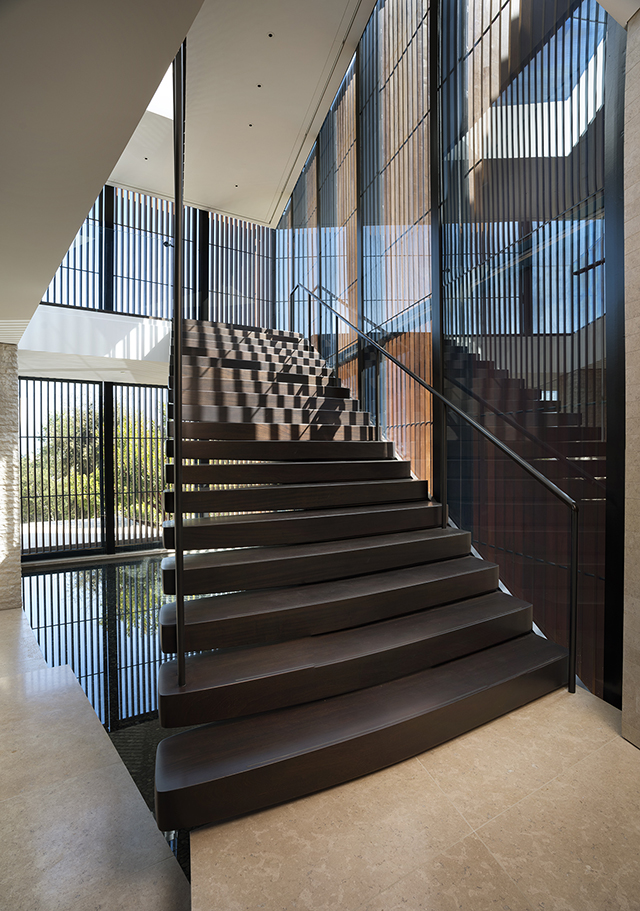 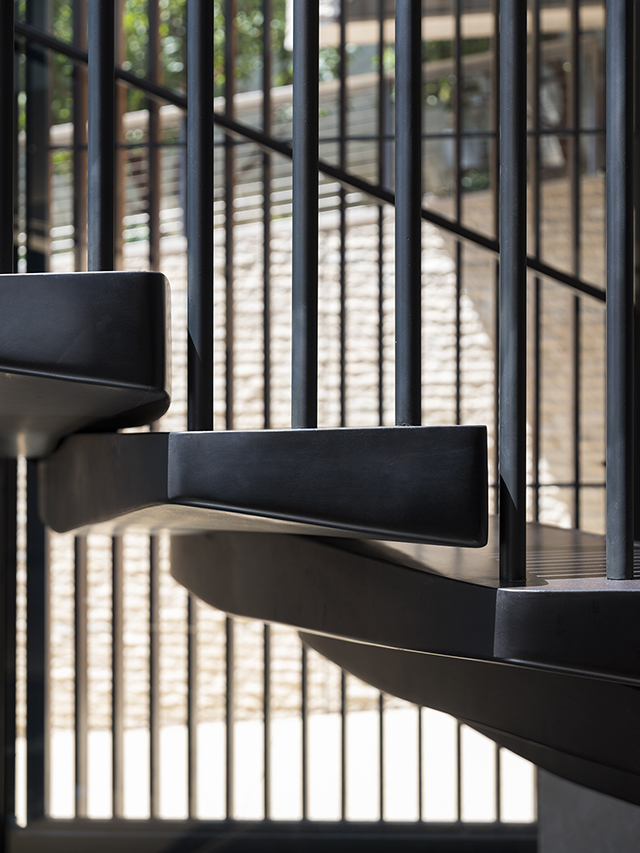 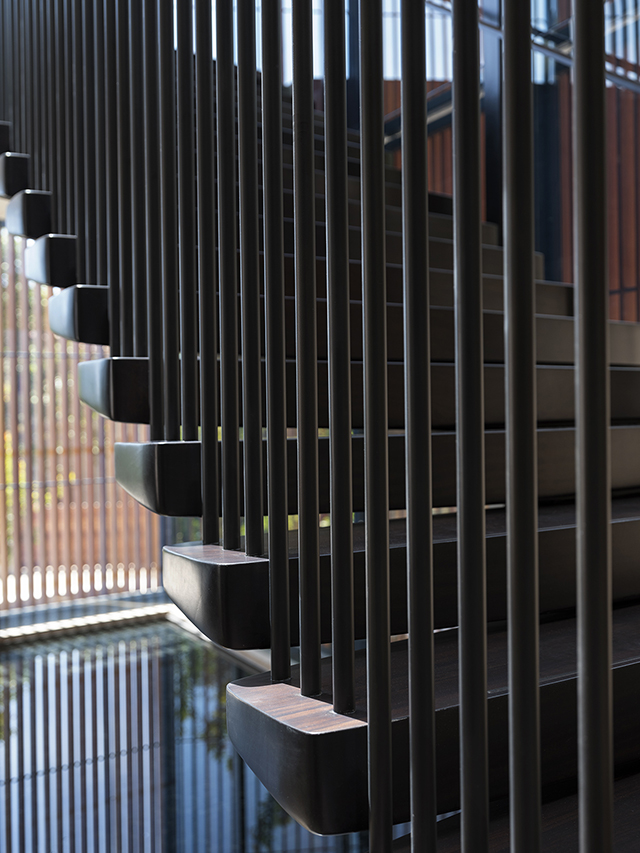 The alchemistic shift from sketch to working drawings to lived space often lies in well-crafted details. “Our clients wanted a house that’s bespoke, experiential, engages the senses, and has intimacy,” Russell says. “Part of the way we get that is in the crafting of materials and articulating how they come together.”

Nine feet wide, that main stair at the foyer consists of 19 cantilevered treads with shaped bottoms and sides, 3D-milled from 7-ply laminated sapele mahogany. “The steps have a subtle curvature and inflection, so it was necessary to test them with full-scale, high-density foam molds first and adjust as necessary,” says project architect Bradford Kelley. “When you are barefoot, you sense you are on something very sensual and organic and tactile.” A row of darkened vertical steel rods adds lateral support on the outer side, doubling as a guardrail. Putting it all together was a group effort. Says Jim, “The way it was suspended with rods on one side made for a complicated execution. We’d say, ‘could you do this,’ and there was a lot of back and forth early in the process.” The handrails were shaped to fit into the palm, with an inlay of blackened steel along the top. Likewise, a series of interior screens defining the circulation spaces are sculpted with softened edges. On the outside, the slats sit in blackened steel planes.

It’s these kinds of construction puzzles that Jim’s company likes to solve. “It was a great process working with ShubinDonaldson, and Brad in particular,” Jim says.” He has a hyper focus; it’s rare to see someone caring so much and examining every detail.”

Other materials achieve the same level of refinement. The garage wall abutting the living spaces has a skin of dark-stained oak with brass reveals. Honed limestone floors in the kitchen and living room merge with the south patio’s sandblasted limestone. And the kitchen is outfitted with oak Bulthaup cabinetry and a dark anodized aluminum island with a walnut seating area. The walnut’s splayed bottom edge, an everyday reminder of the huge tree from which it was cut, has moon-shaped pieces of inset steel.

With its firm embrace of the temperate climate and coastal bluffs, this project is a reminder of the layered nature of good architecture. And that there are nuggets of opportunity in the nuances of a brief—the implied rather than the explicit. “It’s interesting that when you view it from across the canyon, you kind of have to look for it,” Russell says. “Between the stone, ipe, landscaping, and garden terracing, it feels like part of the earth, which helps make it a truly wonderful place to live.” 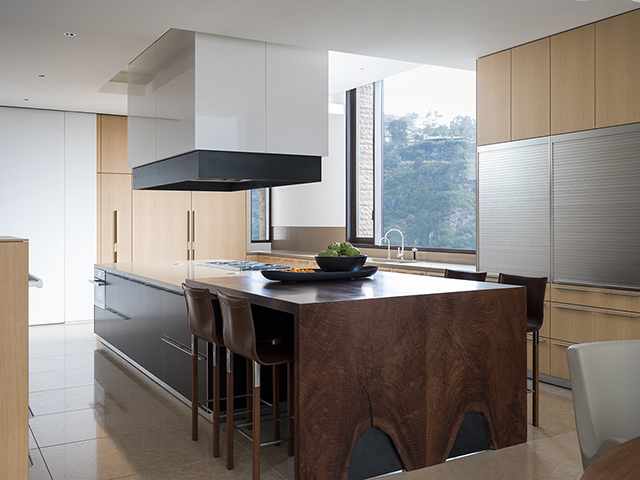 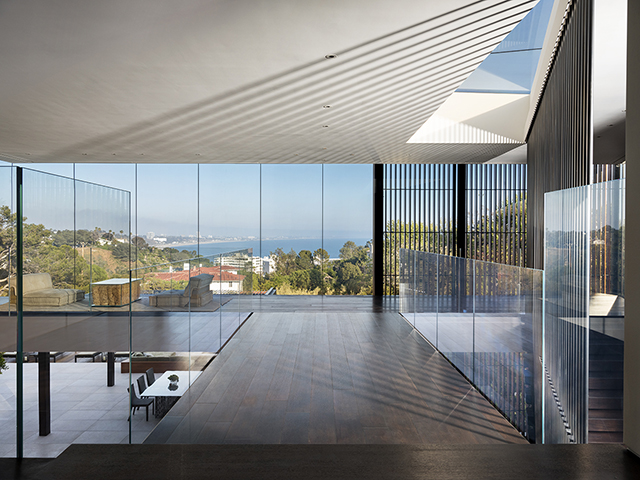 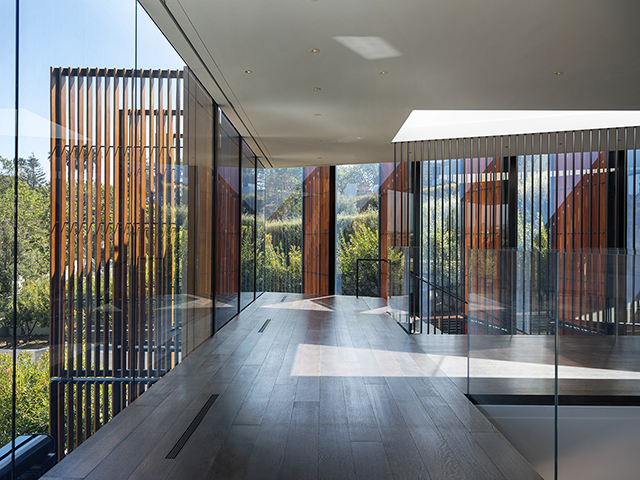 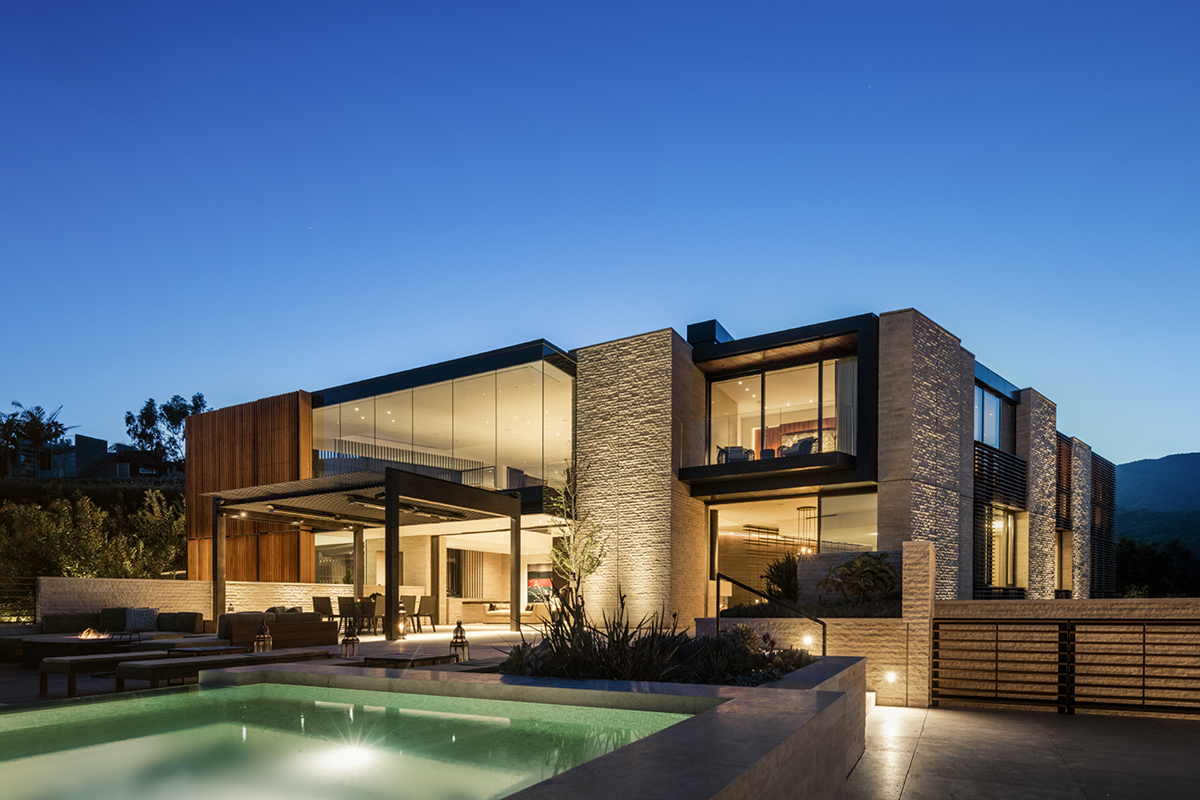 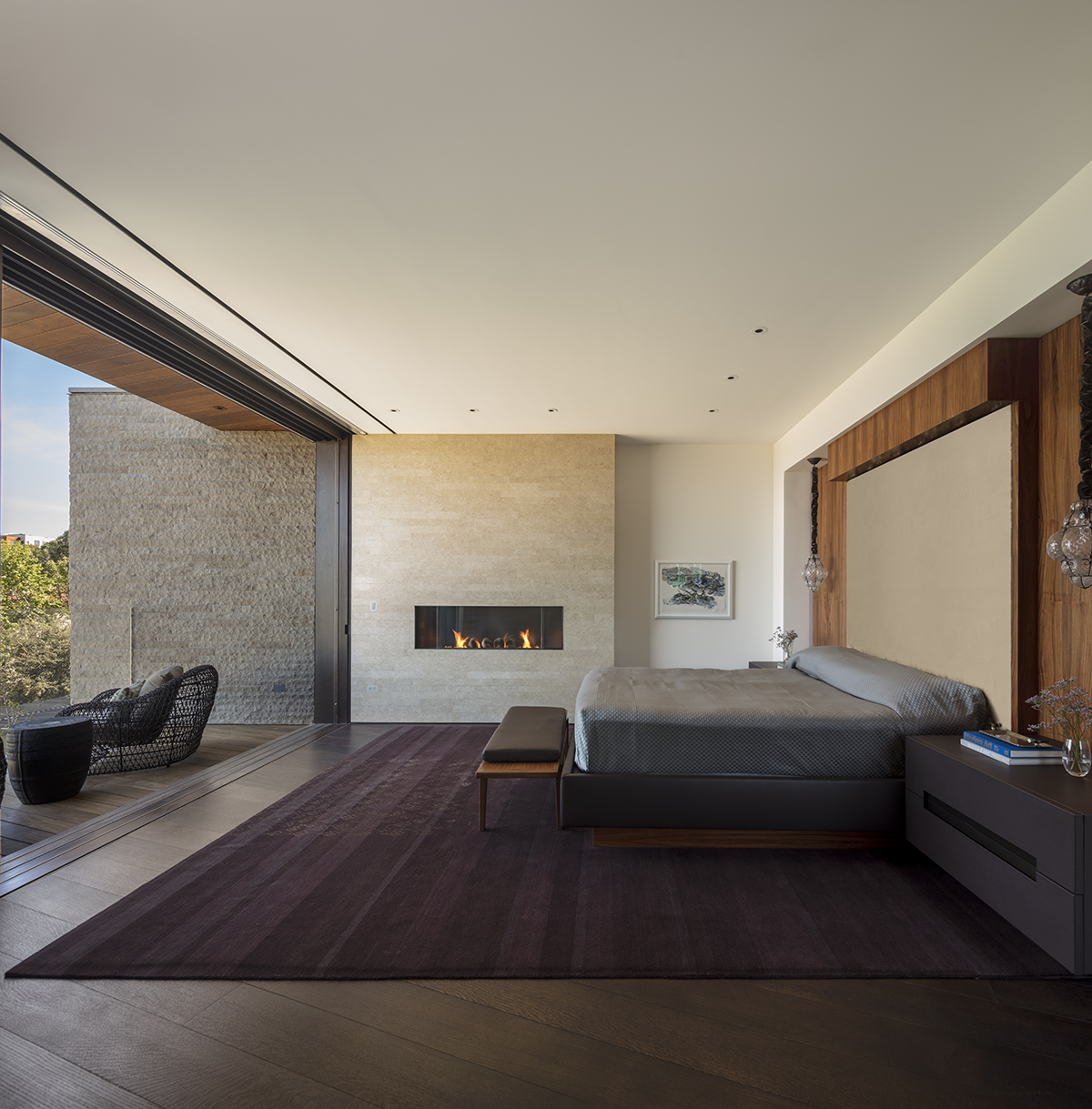 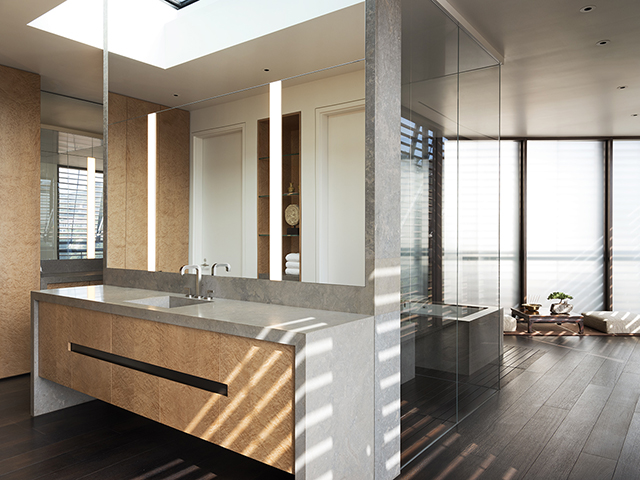 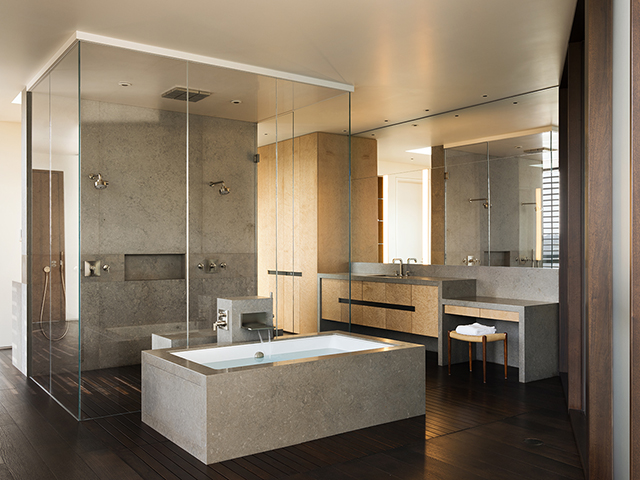 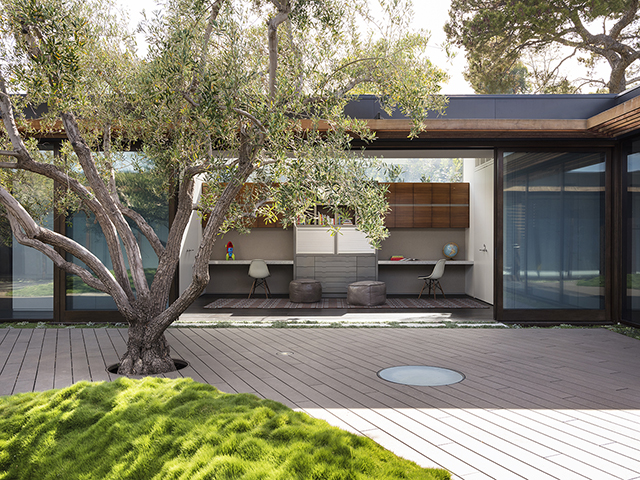 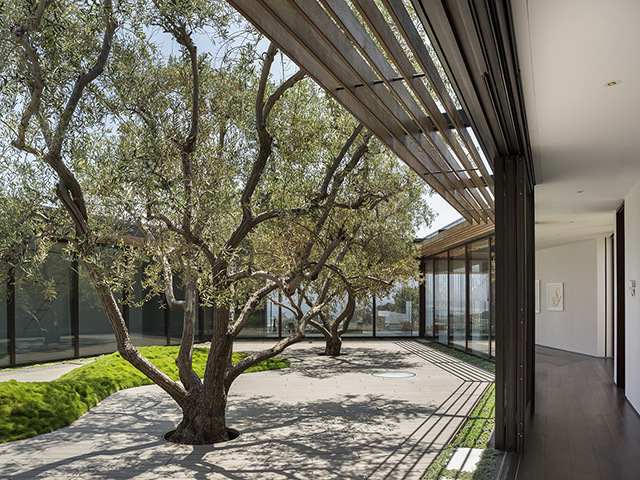 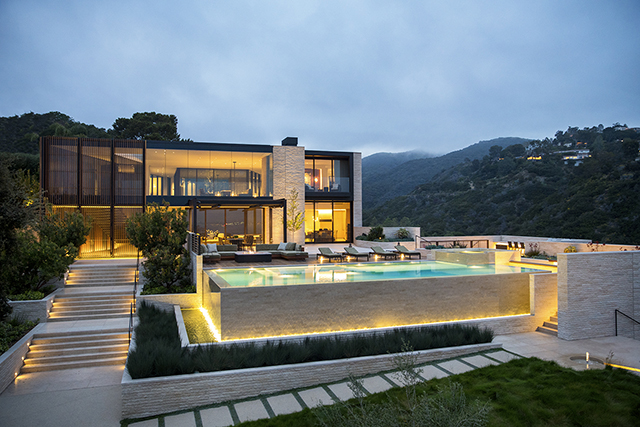 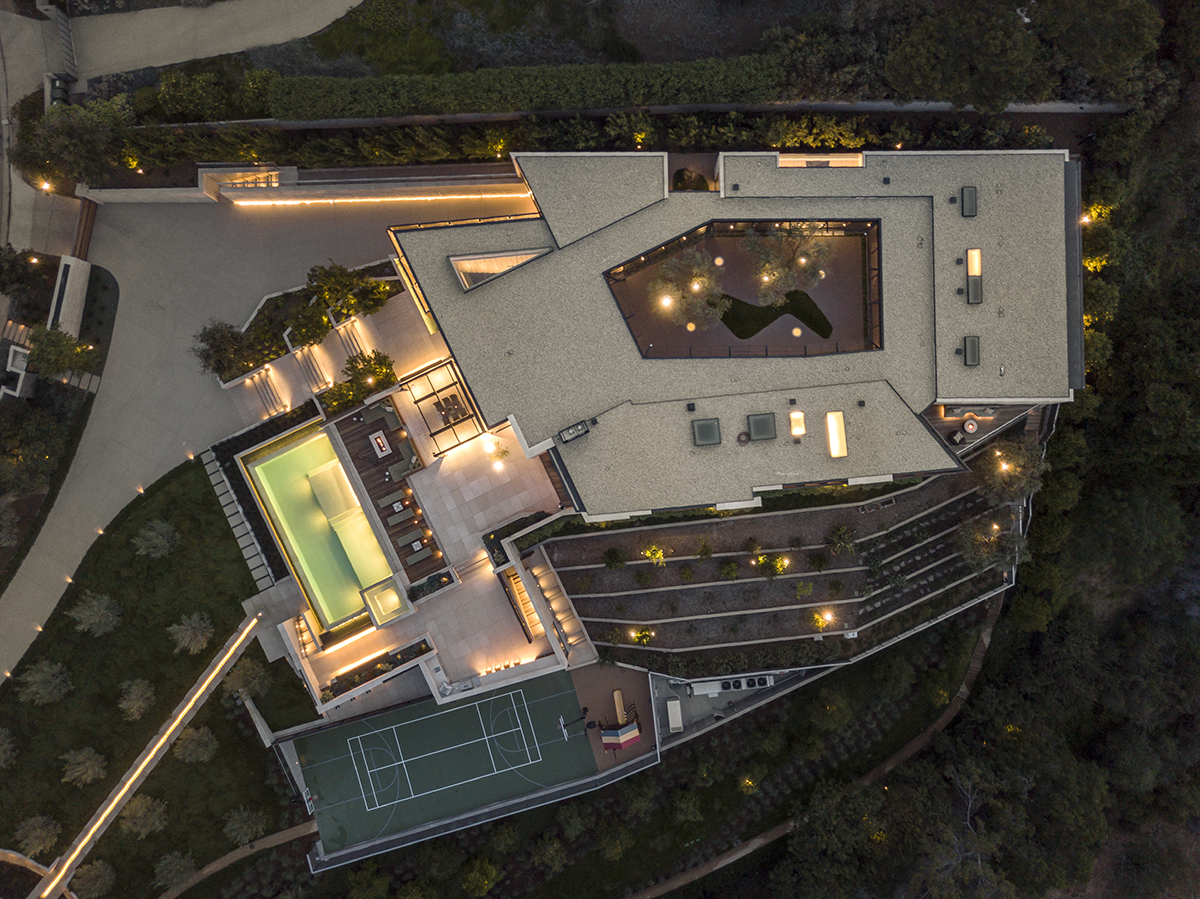 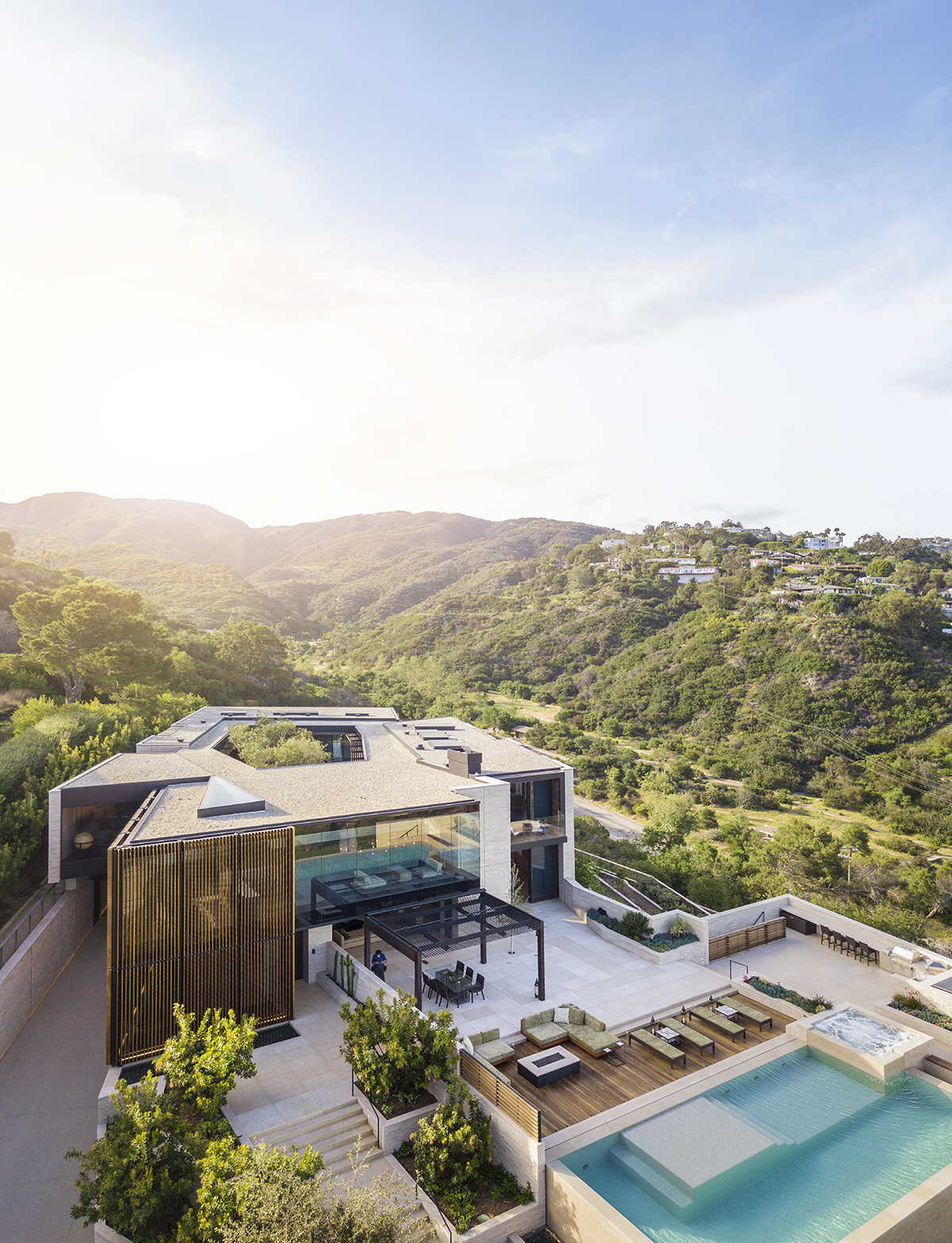 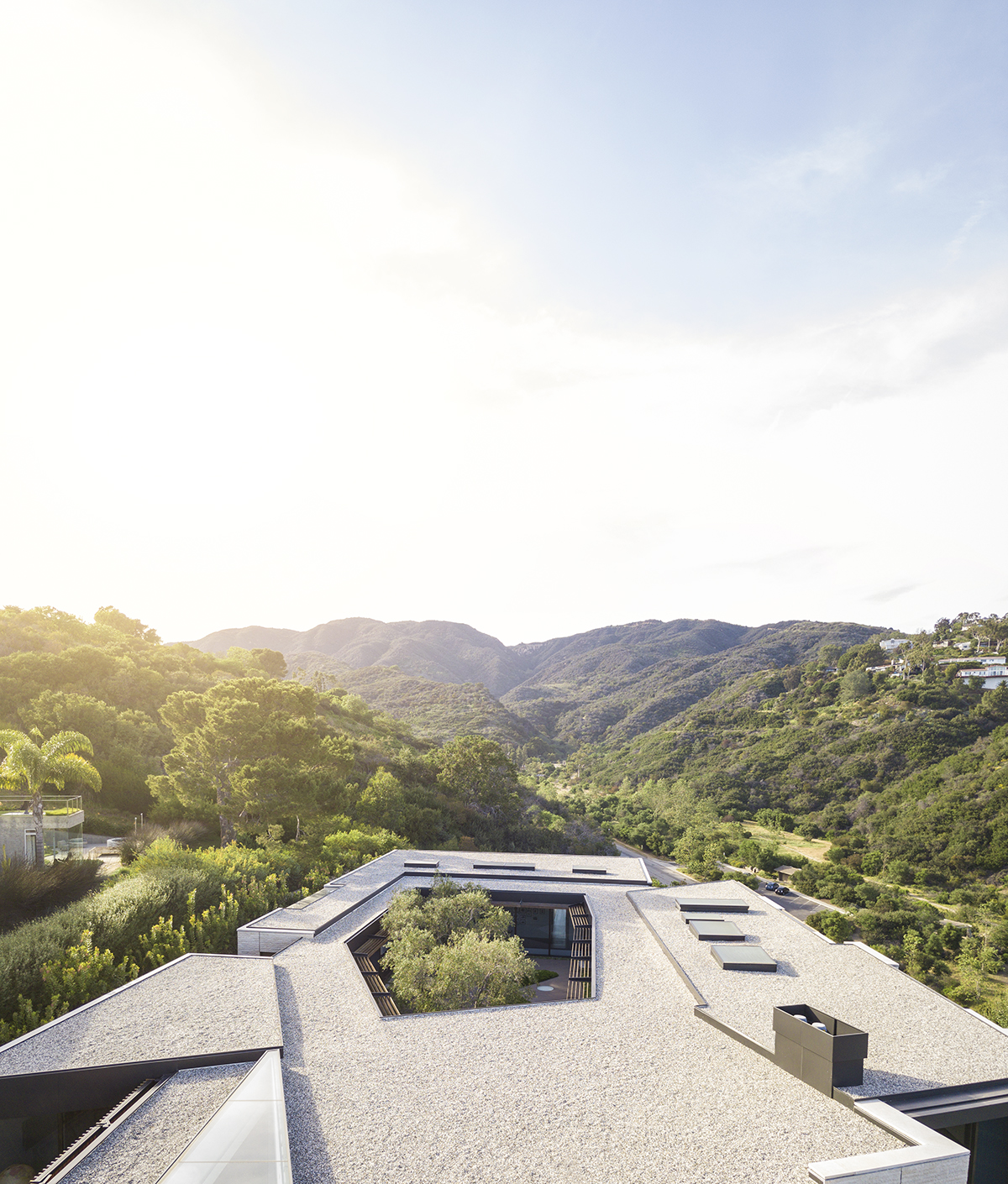 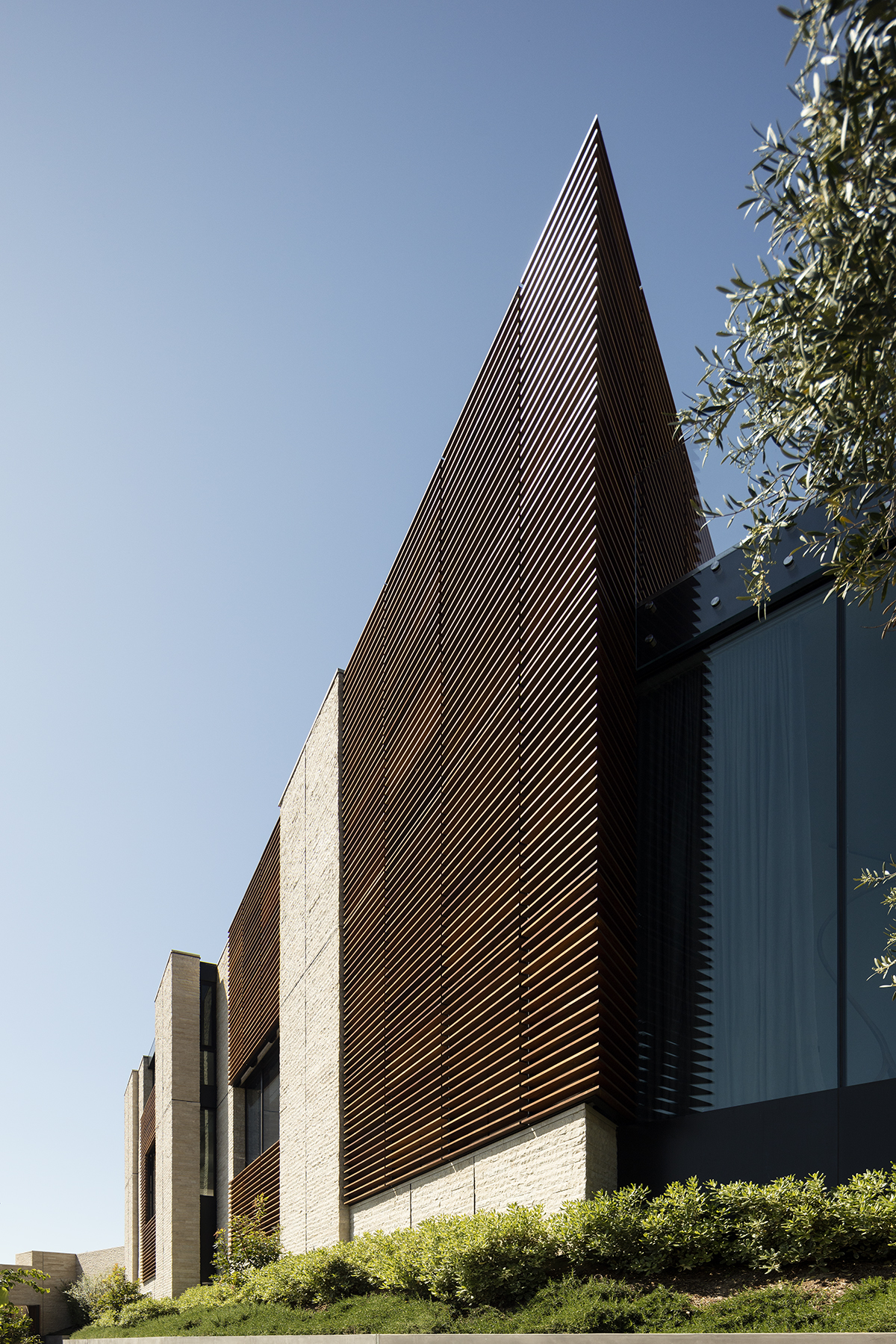 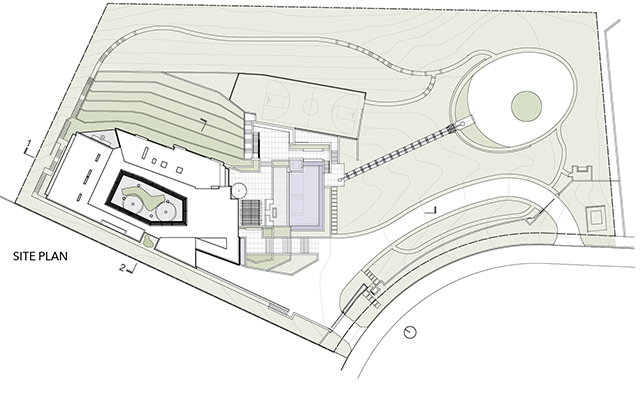