An hour and a half from the hustle of San Francisco, Orchard House forms a quiet retreat for a family from the city’s Potrero Hill neighborhood. The couple, with three young children, had found a modest house in Sonoma County with views of a former apple orchard. But they weren’t so keen on the house. In addition to its 1980s finishes, some of the framing was undersized, and there was water damage due to an asphalt driveway that sloped downhill to an attached garage. Architect Cary Bernstein, AIA, who also lives in Potrero Hill, had renovated their city residence in 2009 and was asked to redesign the weekend getaway.

Agriculture has a long history in Sonoma County. It was a prime plum- and apple-growing region until the second half of the 20th century, when it struggled to compete with other fruit-producing areas, and vineyards and horse farms gradually replaced the orchards. Heritage apple trees still dot this 3-acre site, though, and Cary kept those precedents in mind when she went to the drawing board. In a renovation that took the building down to the floor plate, she responded with a light, airy house that evokes the working shed roots.

Its long, gabled profile is almost anonymous, and that was the idea. “It’s more like a farm building than a farmhouse, with elongated sheds that are working buildings, as opposed to a house and porch, something more cute,” Cary says. “The utilitarian part of it speaks to the clients’ value system—simple and unfussy.”

The 2,380-square-foot house walks a line between modern and vernacular. Its exterior character—pitched roof and dark cedar board-and-batten siding—speaks strongly of its place, while the light-colored, open-plan interior is more of-the-moment.

The clients’ requirements were clear. In addition to championing the view, a priority was to find more space for overnight guests within the existing two-bedroom structure. Clearing out the warren of halls, Cary accomplished this with two broad strokes. The two-car garage was converted to a guest suite and loft, bath, laundry, and pantry hall. And squaring off the southwest corner made room for a multipurpose TV/study/overflow sleeping space. The existing bedrooms didn’t move, nor did the entry, living room, and baths, but the second bedroom was outfitted as a bunkroom.

It was, as is usually the case in this county, all about the outdoors. There are flow-through connections on every side—a sight line here, a segue there. Visitors arrive at a gravel parking area and carport that sits just above the house. From there they descend sprawling, poured-in-place concrete steps to a gravel walkway and wooden bridge that crosses a small gully to the red-framed front door. “It’s the same construction you’d find on a trail, wood with a curb,” Cary says of the bridge.

While the owners initially resisted having to build a carport—Sonoma County requires covered parking for one car—now they can’t imagine living without it, she says. The gabled structure mirrors the house’s standing seam roof and board-and-batten siding and includes storage for toys and gardening equipment. “There are many uses for a roofed space because it gets so hot,” Cary says, “such as a stage for a band or theater. They keep a ping-pong table in it.” 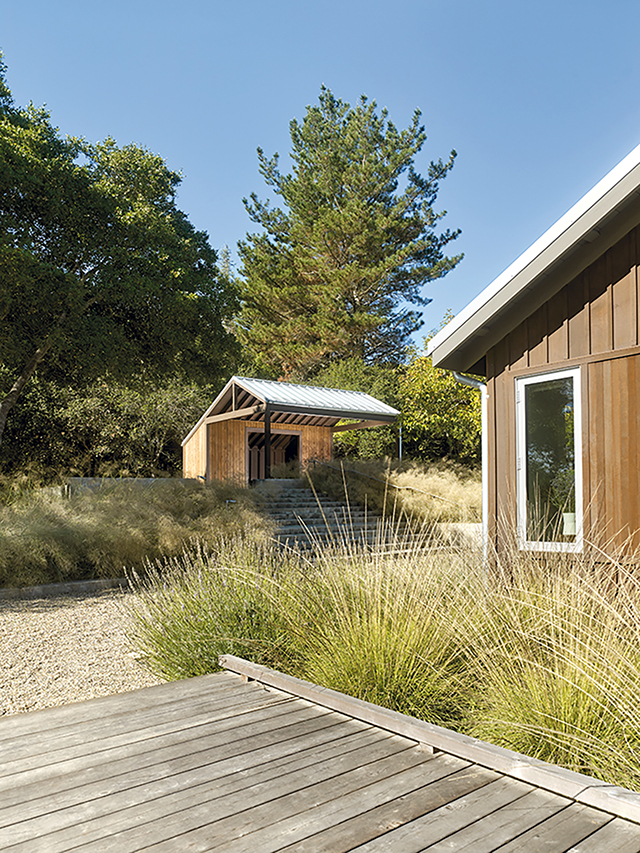 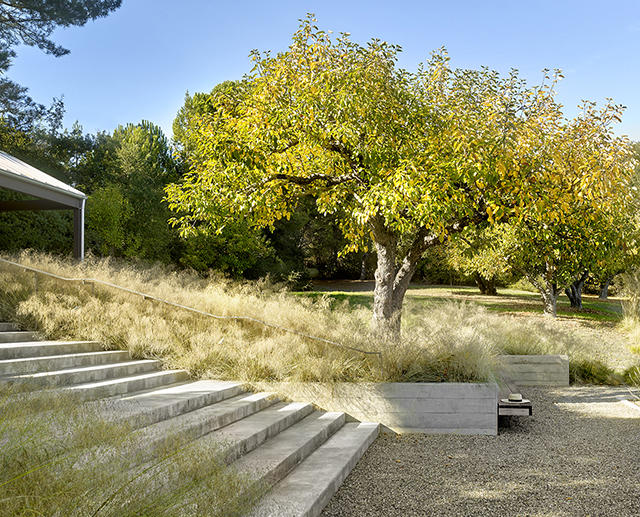 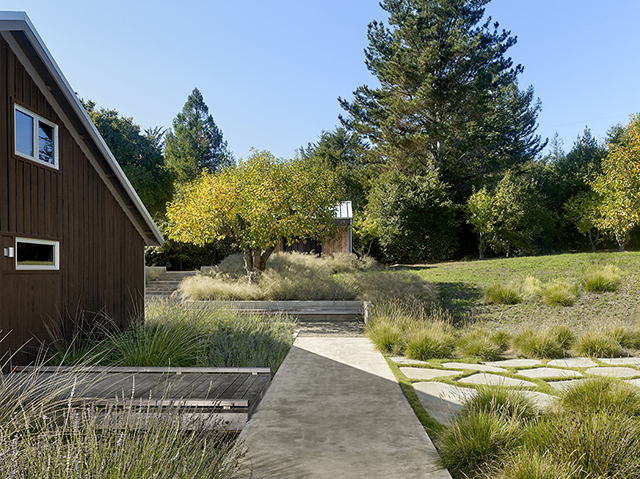 One of the major design moves was to streamline the multi-gabled roof into two ridges, one belonging to the former garage on the north, the other stretching to the south. Under that roof, an interior cross-axis runs from the front door to a rear deck outside the living room, while the long axis moves from the kitchen on the north to the bedrooms on the south. Lithe steel trellises make a metaphorical framing rhythm—the solid house seems to dissolve as it meets the landscape. Outside the master bedroom, for example, the trellis is gabled, part of the dematerializing long elevation that also serves as a canopy on the deck and a moment frame stabilizing that side of the building. “Sometimes I think of it as an animal carcass you’d find in rural areas,” Cary says. 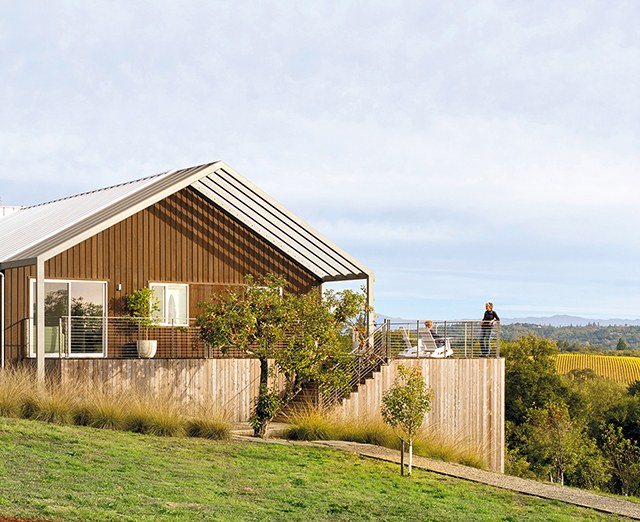 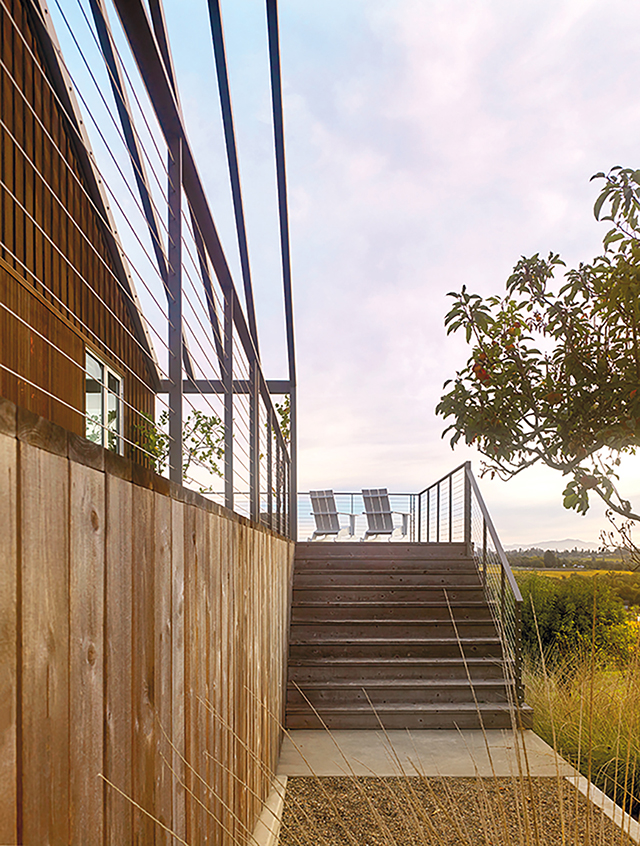 Outside the kitchen, another trellis mitigates heat and light on the deck’s dining area. The closely spaced, cold-rolled steel slats were tack-welded to the top of T-shaped channels bolted to the house. The tacks aren’t visible and can be done pretty quickly without the expense of cleaning up welds, Cary says. Grapevines will eventually cover the trellises—a wink at the area’s vineyards. 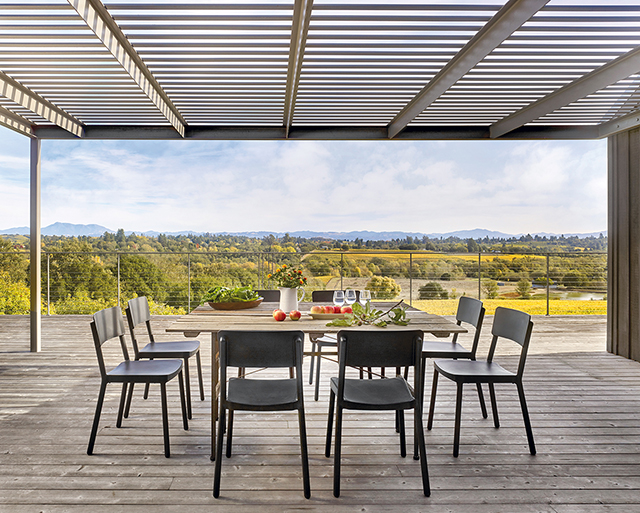 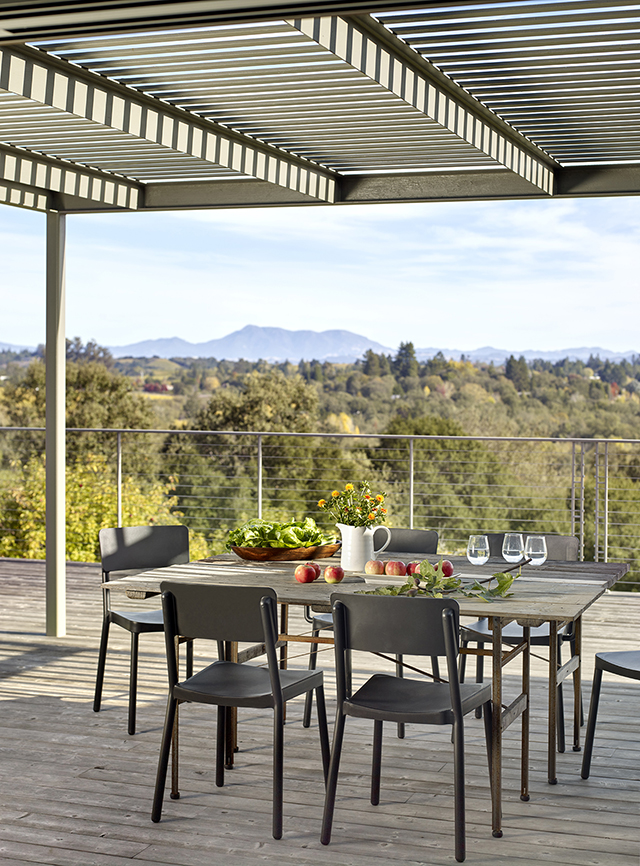 Inside, nature is always beckoning. The most prominent architectural element is a clerestory dormer that Cary describes as a hay chute, recalling a feature of nearby barns. Washed with light, the interior changes as the sun circles the house.

A big steel beam runs across the living room under that west-facing window. “We said we could explore the geometry of this gable by making an angled pitch from the dormer window down toward the beam,” Cary says. “A small amount of light through a window into a splayed opening gives great diffuse light. The window isn’t that big—about 18 feet tall by 6 feet long—but it goes into a volume that’s bouncing light around to make it feel bigger. The scale of that opening is unexpectedly modern and speaks to the scale of the room.” The breakfast table benefits directly from this cathedralized space. “We poked a pyramid into the ceiling, so you have a pyramid in elevation at the hay chute and a pyramid in section over the breakfast table where the bell lamp is hanging,” she says. 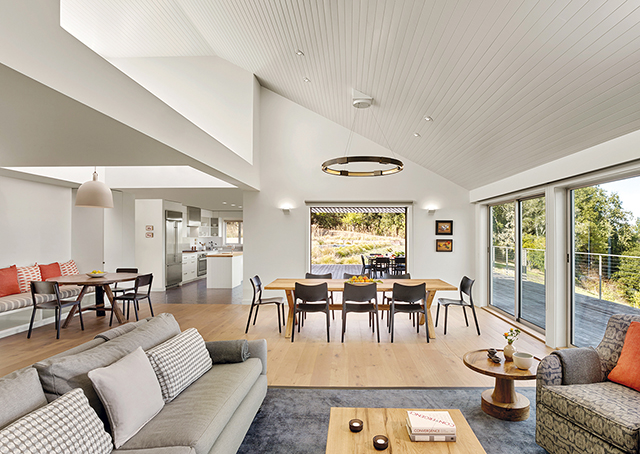 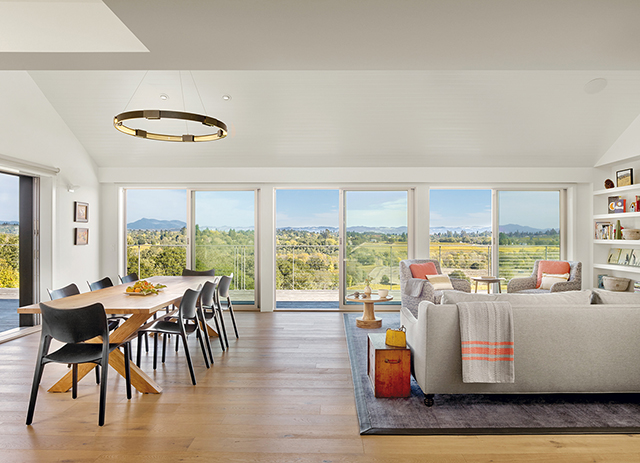 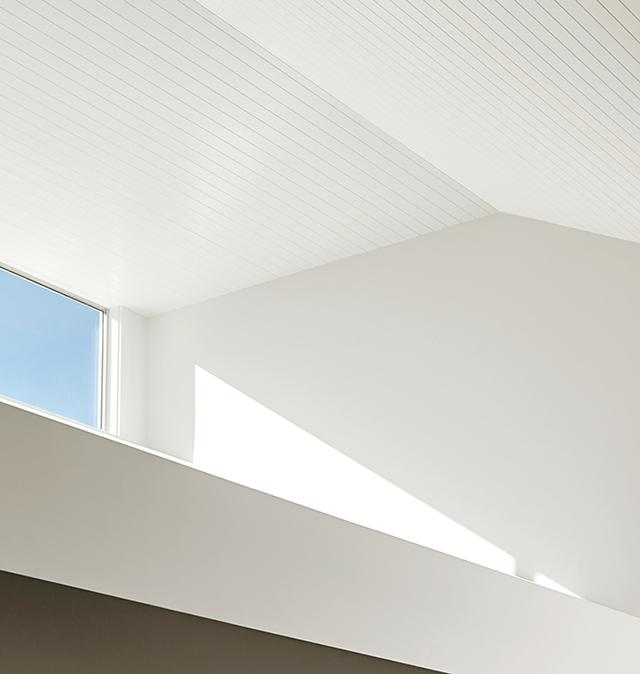 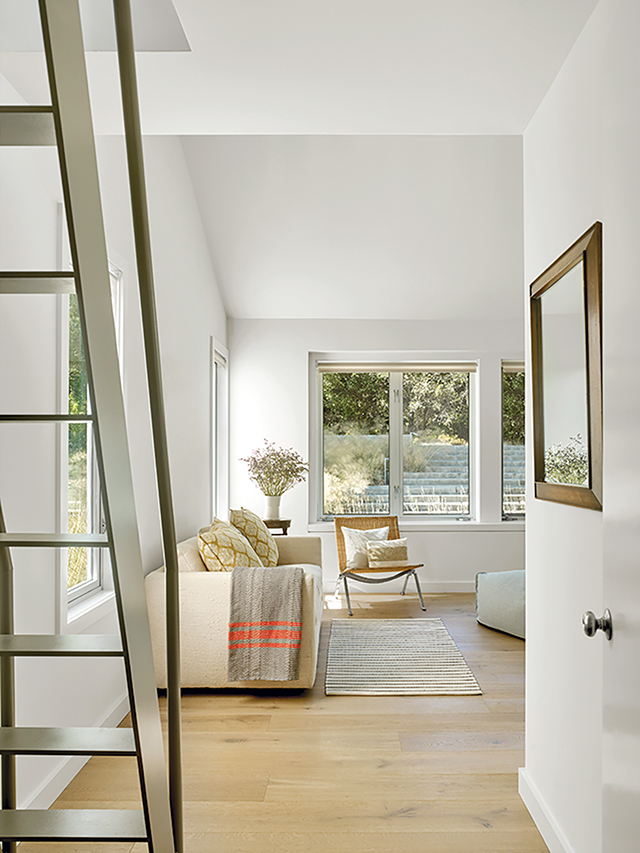 The kitchen, formerly occupying the breakfast area, was moved to the northeast corner overlooking the deck and vineyards beyond. Around the corner, a generous pantry hall leading to the pool becomes an extension of both the kitchen and the entryway mudroom. “It’s part of the cleanup of the wonky original plan, creating a second line of sight that goes directly to the pool and makes the living spaces feel bigger by having this parallel axis,” Cary says. A washer and dryer are stashed behind louvered doors, and shelves and hooks hold pool towels, bathing suits, and pantry supplies, while the adjacent guest bath serves as a changing area. 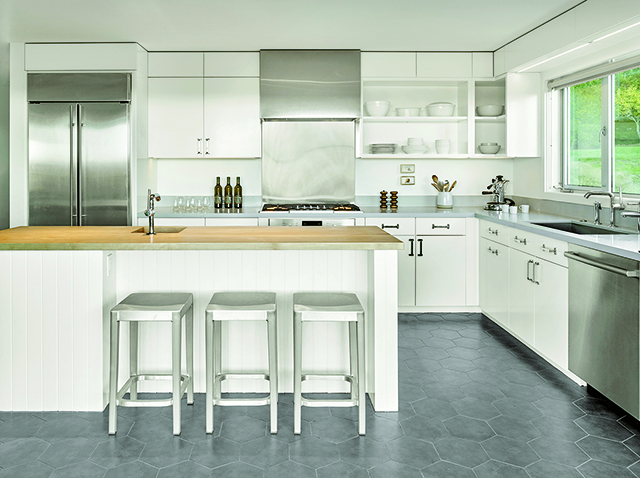 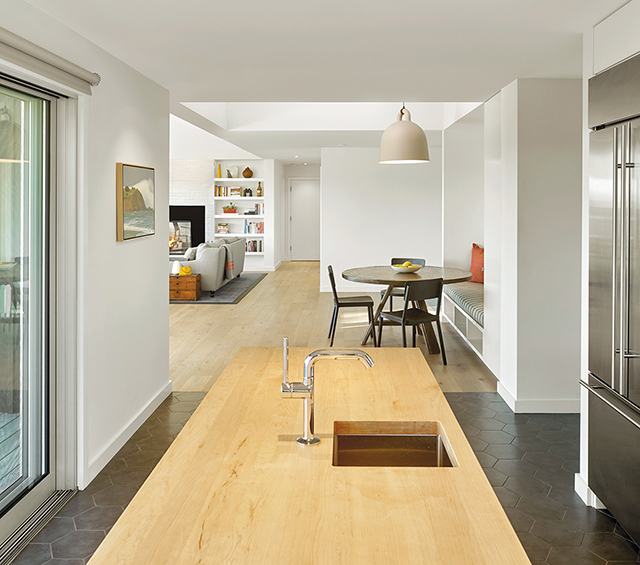 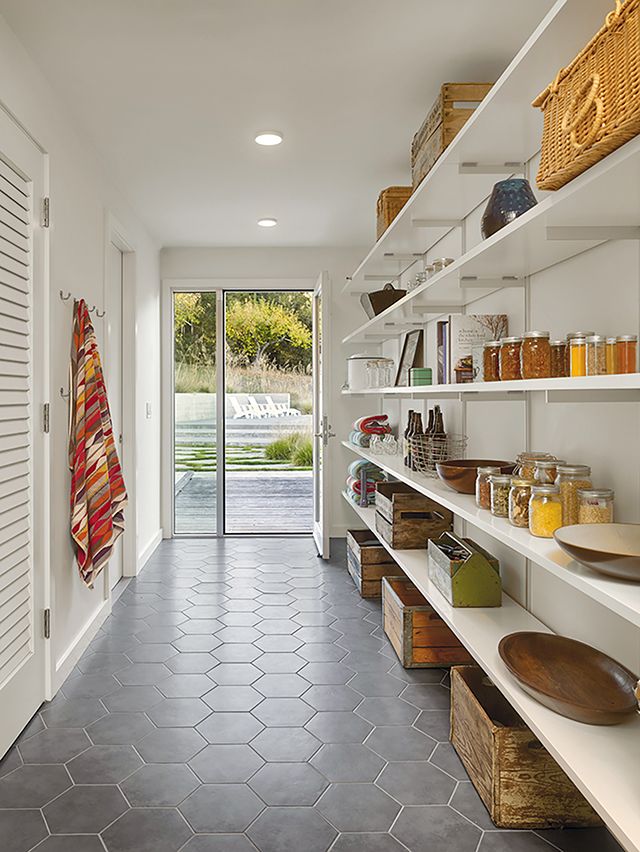 Here too, house and landscape are in lockstep. The door at the end of the pantry hall opens to a second wooden bridge that crosses a gully to the concrete pool deck, echoing the low-maintenance material of the front entry stairs and retaining walls. Steps take on a sculptural quality as they move around the property. On the pool side, a concrete path meets heavy timber stairs, “more in the language of a trail,” Cary says. On the south side, wide wood stairs come down from the bedroom deck to a concrete landing; it turns into a flagstone path that works its way around the apple trees. 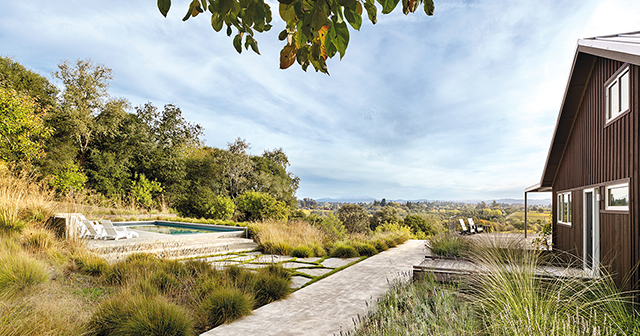 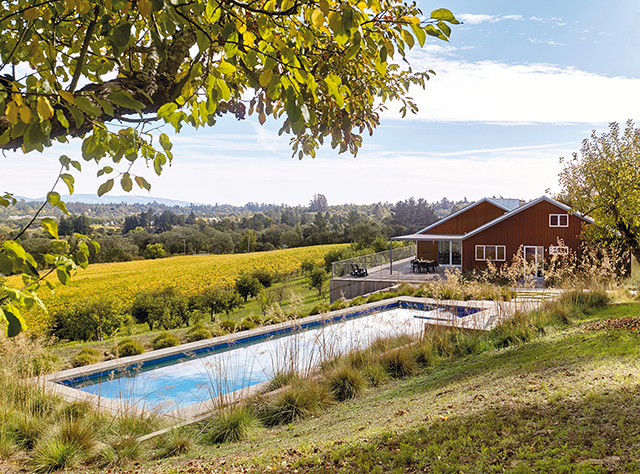 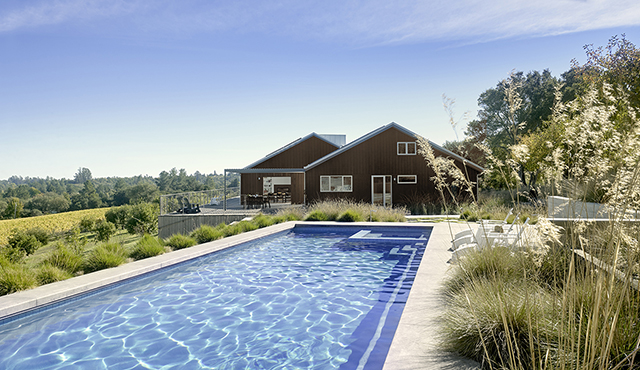 Indeed, line and texture help to shape the exterior experience: the ribs on the standing seam metal roof and board-and-batten siding, the inset panels between windows. “I like the challenge of working with familiar technologies and bringing them to a new place,” Cary says. “Board-and-batten siding can have a modern look in the right context. Sean Scully, an Irish-born painter, made gridded canvases with cutouts—grid within a grid. Some of the inset siding is like that, or even music—theme and variation.”

It’s the rare construction crew that gets to cool off in a job-site pool at the end of the workday, but here it was the first thing to go in the ground. “The house took almost a year to build, and the clients wanted the pool so they could enjoy it,” says Bill Tomrose, president of Tomrose Construction. “Sometimes my guys could jump in.” Working the old-fashioned way, his team underpinned part of the house that was sinking and used come-alongs, jacks, and winches to pull everything into plumb and level. The rest of the structure is wood-framed except for the hay chute’s steel beam, and the prefabricated steel trellises were assembled on-site.

The destination is an easy weekend trip, and Cary is invited to use the house sometimes, too. “It’s a small footprint, but the house and landscape are coordinated, so the owners can have lots of people there and it doesn’t feel crowded,” she says. “They love lending it to their friends. It’s a joyful place.” 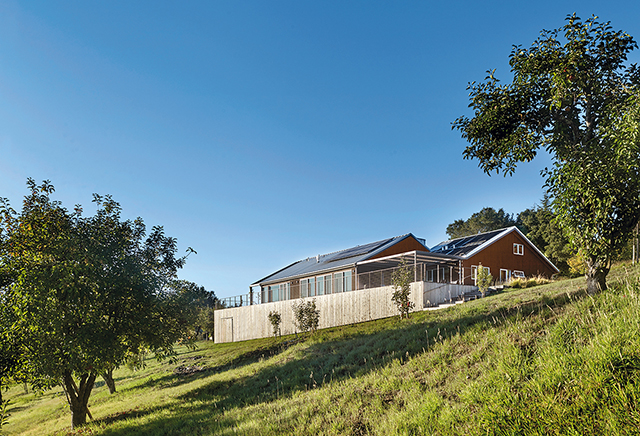 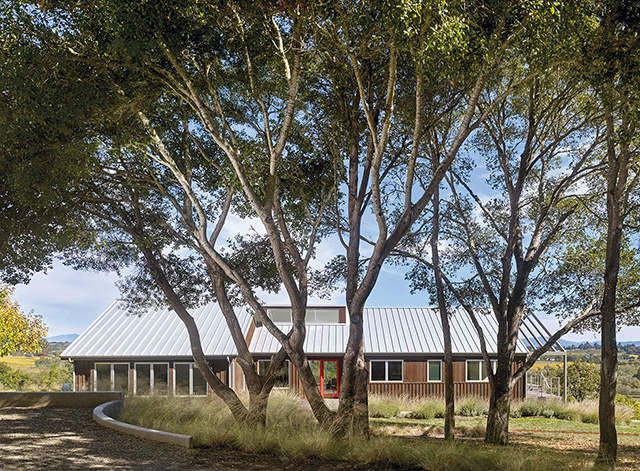 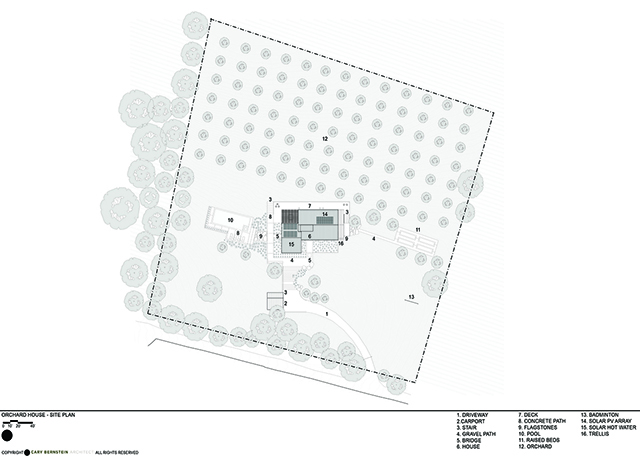 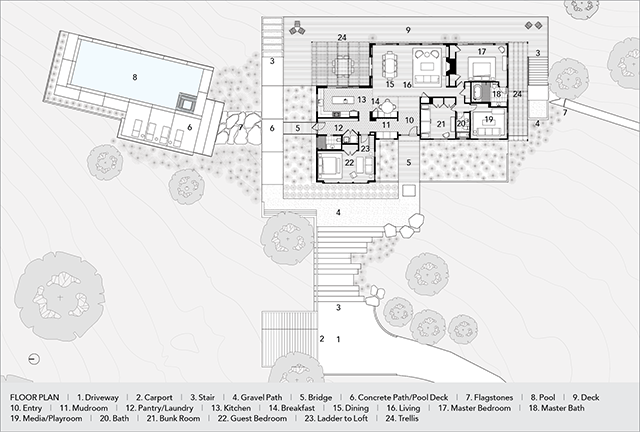 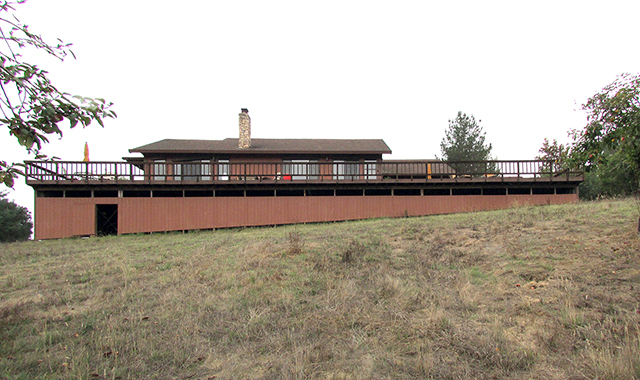 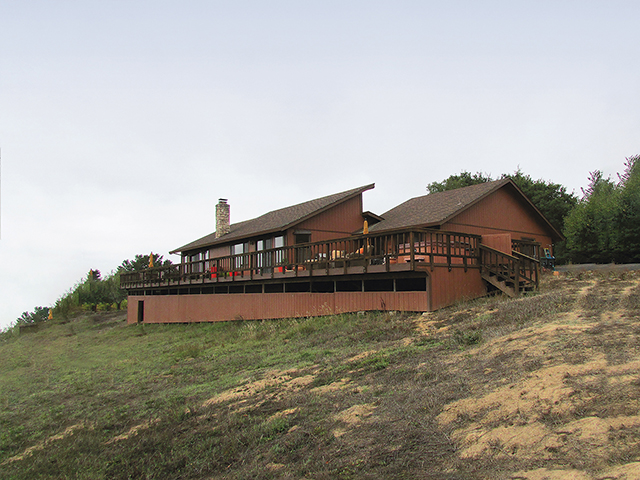 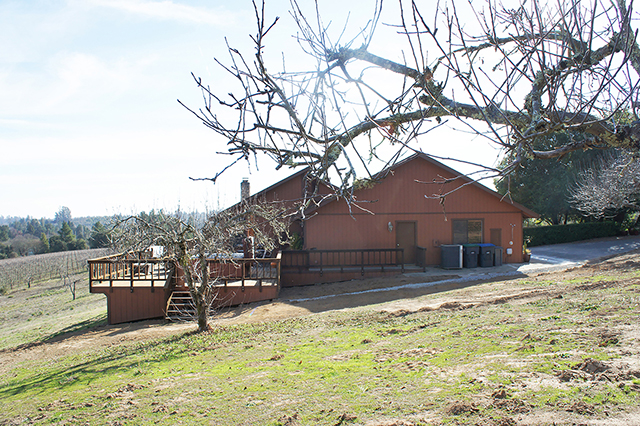 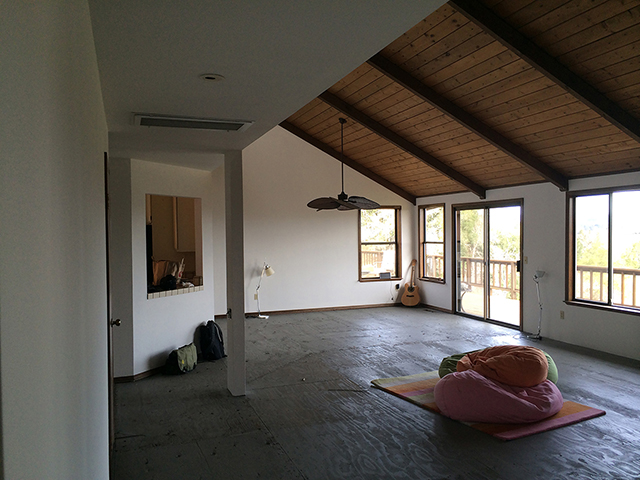 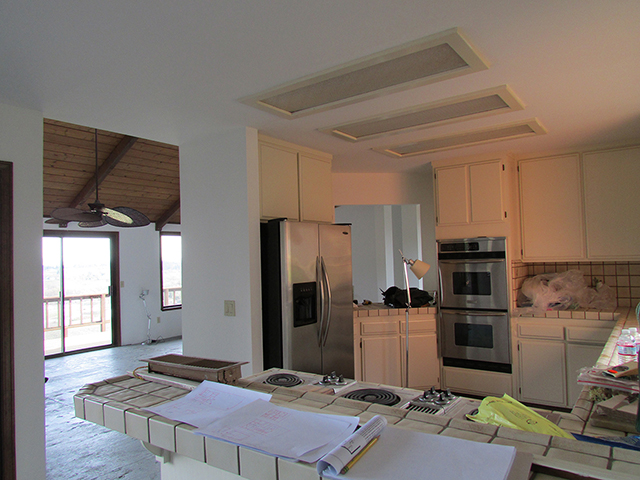 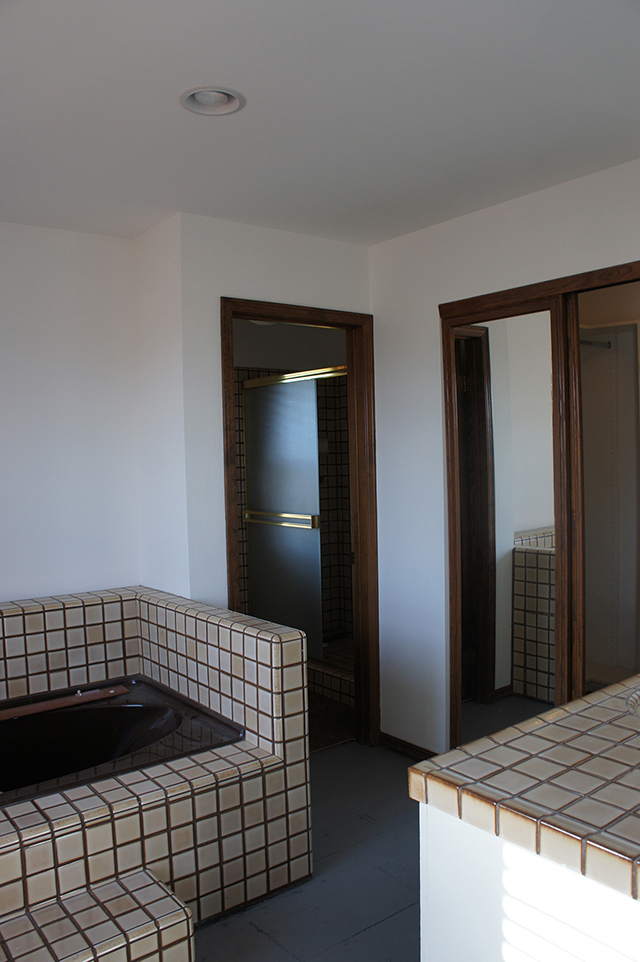 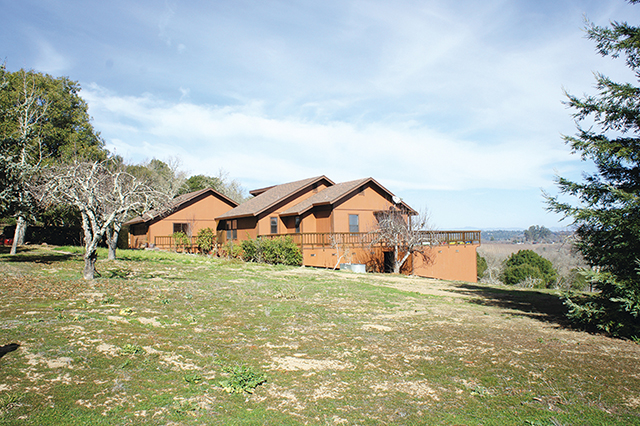 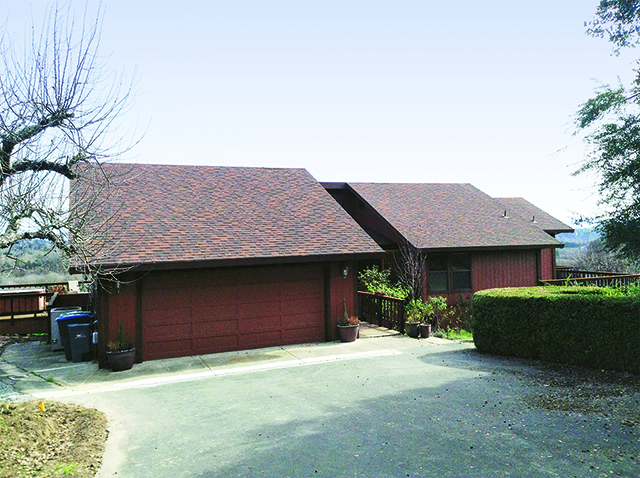