“The most common building type in America is a modest house in a modest neighborhood, and yet architecture seldom results from that,” says Max Levy, FAIA. “I always wanted to do that type of house—to see, what is the problem here.”

He got that chance on Merrilee Lane, a cheerful street name that could come from Anywhere USA. Indeed, this 2,000-square-foot house was designed on a featureless lot in an ordinary 1950s neighborhood and replaced “a sad little house.” Think of the Levittowns on the outskirts of metro areas—single-family, slab-on-grade dwellings with dense bundles of rooms and small, punched windows. What interested Max was that, despite their small scale, these homes are dark inside and not very pleasant because they don’t connect with the outside. “That’s what we were trying to do here, somehow acknowledge nature,” Max says. “Everybody knows this kind of neighborhood; they are wall-to-wall carpeting across America.”

The budget was relatively modest too, but Max has found that budget doesn’t matter as much as a sympathetic client. A physician, the client’s only request was for more natural light during the day. He didn’t ask for more space than the existing house’s two bedrooms and an open kitchen, dining, and living room. That, and a place to enjoy his collection of art by friends who are serious artists.

Max went to work figuring out how to make something artistic out of this limited palette. Starting with the idea of “light and delight,” he imagined a band of sunlight and a march of trees right down the middle of the site. That move parted the floor plan into a day side and a night side, with a kitchen, dining, and living room in one volume and two bedrooms in the other across a gravel courtyard. Perpendicular to the street, they are linked by a glazed breezeway that doubles as an entry foyer. In this way the architecture frames the trees—crape myrtles with exfoliating, cinnamon-colored bark; white summer blossoms; and vivid fall color. On the street side, a carport caps the east wing, and a one-bay garage terminates the west wing. 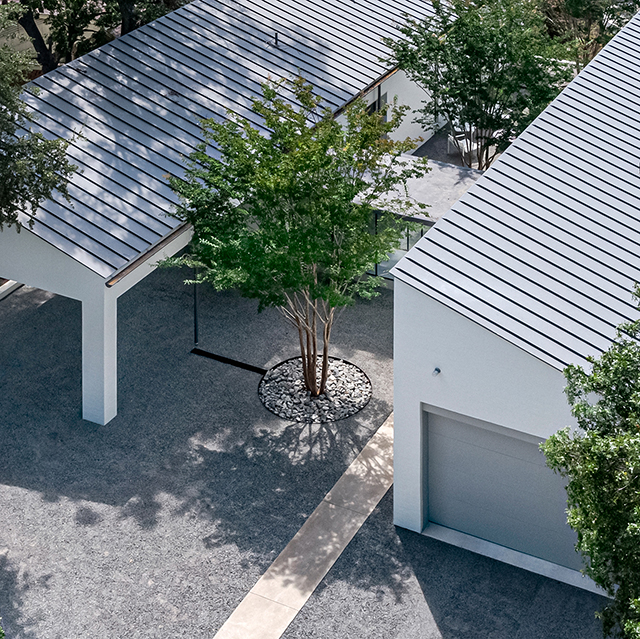 As one discovers here, when architecture intersects with nature, the forms can be fairly basic. Glass walls make the two rectangular volumes seem much larger than their 14-foot-wide interior dimension. The simple, identical structures could be constructed economically. Roofs consist of repetitive, gang-nailed 2×4 trusses, the kind homebuilders use, so the framing went up quickly and efficiently. Max also specified the most inexpensive brick he could find and had it painted white. “At this price point the masons you get are not very good, so by painting it white you don’t see all the hiccups,” he says. The standing steam metal roofs were a pricier item, but the labor cost was reasonable because the forms are so elementary.

This simplicity has other gifts, too. “Modernism has a tendency to be strident in an ordinary modest neighborhood,” Max says. “We wanted to be a good neighbor; the forms are quiet, and something of the light of that central courtyard is given back to the street.” The light also gives back to the house. Each volume’s shed roof relates to the passage of the sun through the day: The east- and west-facing roofs are pitched so that in the morning the courtyard is bright with sunlight but shaded in the afternoon. And the sun coming through the trees fills the white interior with dappled light. “The client has commented on the pleasure of seeing that,” Max says. 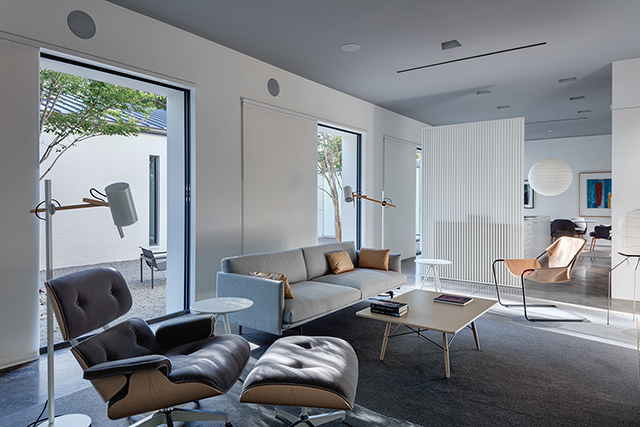 In detailing the landscape, Max was inspired by the Jeffersonian notion of Yankee ingenuity, aka poetic utility. “The trick when you do that is, it can’t be overwrought, just very simple,” he says. The trees are native to Louisiana, which gets more rainfall than Dallas does. However, the amount these trees get is greater than the typical rainfall. That’s because eight evenly spaced runnels, fabricated from ¼-inch-thick steel, channel water from stock downspouts to the trees in their circular beds, as well as to a stand of bamboo screening the west property line. With their crisp repetition, it doesn’t have to be raining for the runnels to read as poetry, but when it is, one notices. “We stopped the downspouts above the runnels so that when you’re sitting in the house you can see the rain coming out of the downspouts and rushing through the runnel to the planting,” Max says. “It enhances the feeling of being sheltered, and it’s kind of meditative to watch the rain in that context.” 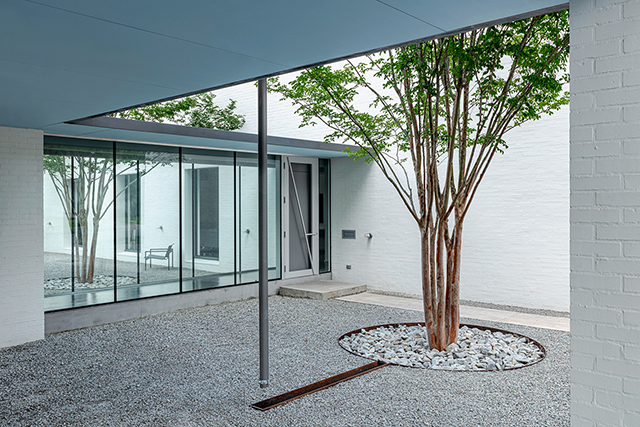 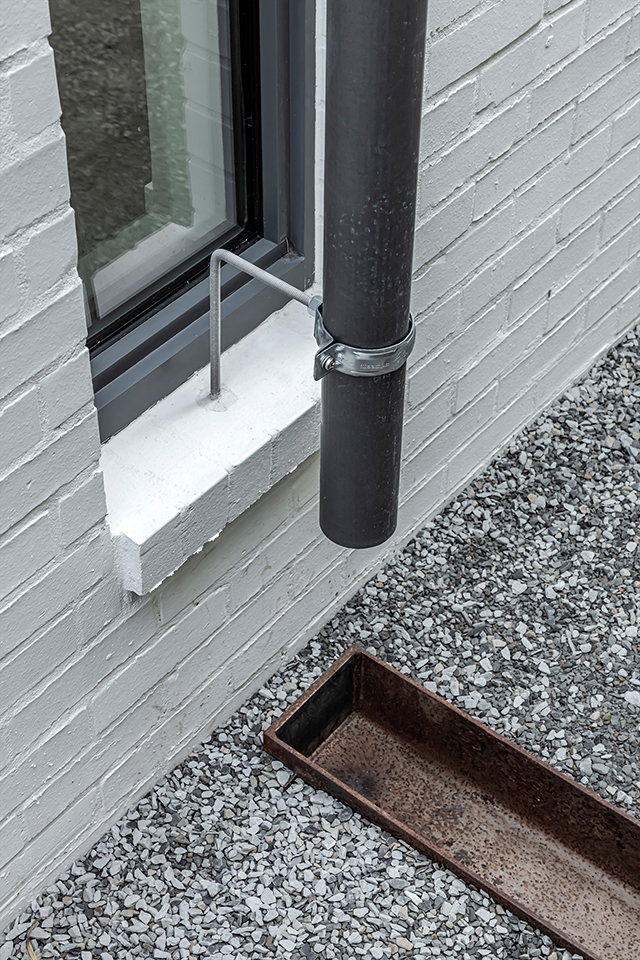 Inside, materials are well-edited and executed. The flooring is concrete slab-on-grade, with 10-foot ceilings painted a matching deep gray, and drywall and cabinets painted white. In the living wing, LUMAsite-backed wood slats create a visual baffle between the kitchen and living room. Window shades are a single sheet of fabric that slides on a track, adding to the sense of weightlessness.

With the interiors painted the exact same hue as the exterior, the house’s apparent size is magnified as one gazes outside and into the other wing. The one splurge was another magnification device—sliding glass doors that pocket into the courtyard-facing walls on both wings, leaving clean openings with rolling screens. In mild weather when the doors are retracted, the house becomes an open-air pavilion with circulation back and forth across the courtyard. 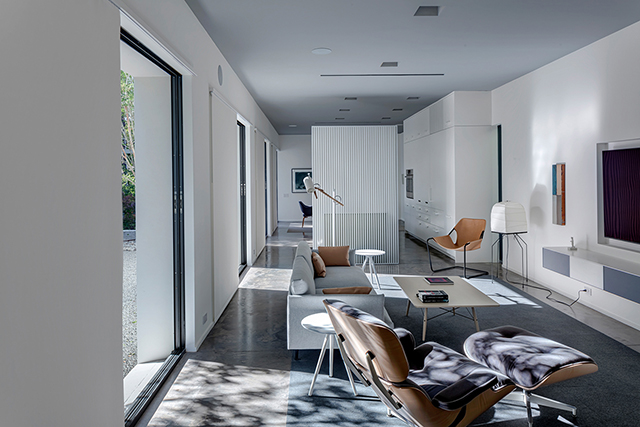 At the far end of the courtyard, a LUMAsite screen, mounted to the back of the house on rolling barn hardware, can be closed and locked. A 1950s-looking plastic that resembles rice paper, the ¼-inch-thick material is screwed to a welded aluminum frame. Behind it in the small backyard, the row of trees in circular beds culminates in a round firepit, an island in ground cover. “Every Thursday the owner has a group of friends over; they sit around the firepit, have their drinks, and look back at the house,” Max says.

The house on Merrilee Lane is not the usual suburban trope, but it is familiar nevertheless. And while the neighbors may have been concerned when they saw this unusual pair of forms going up, “a passerby also enjoys the lightness of this house,” Max says, “so it’s been well received.” 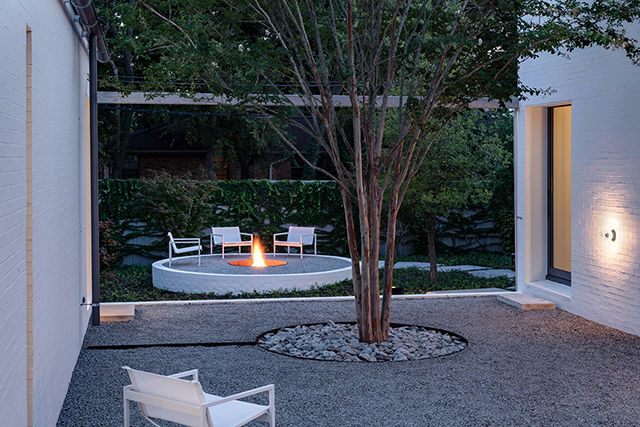 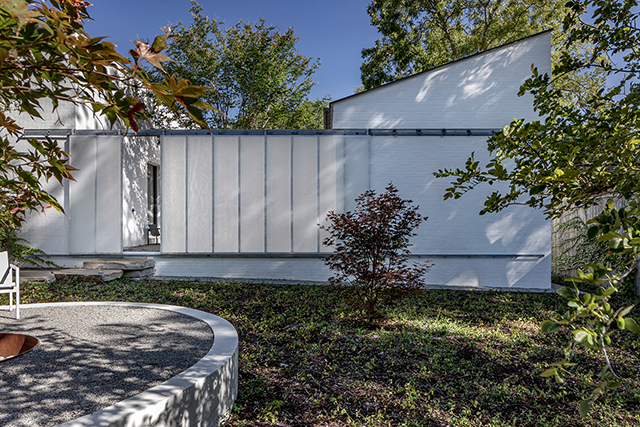 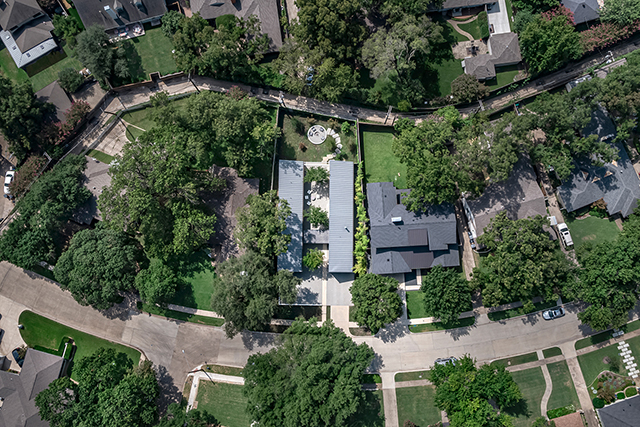 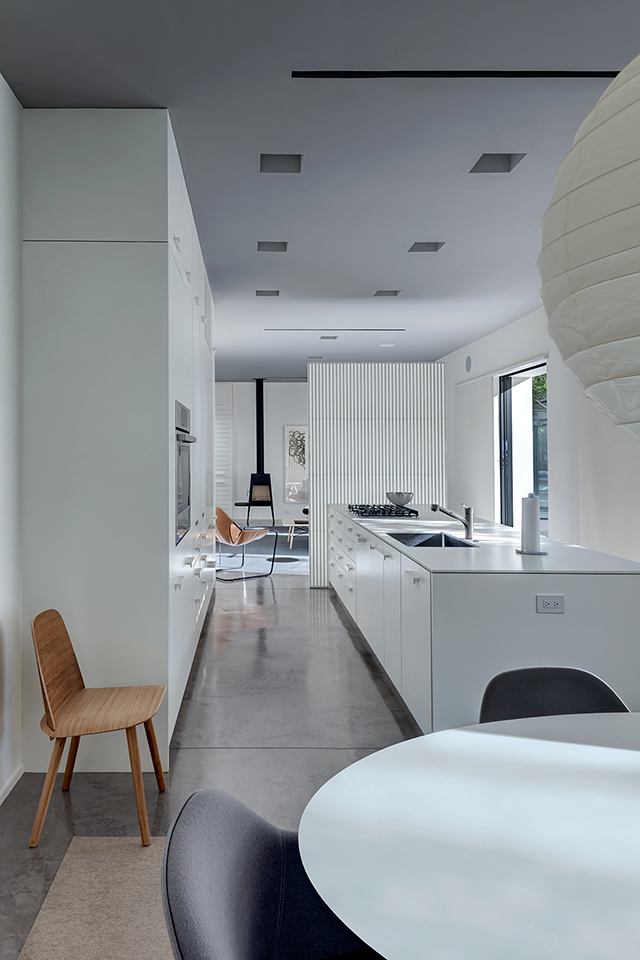 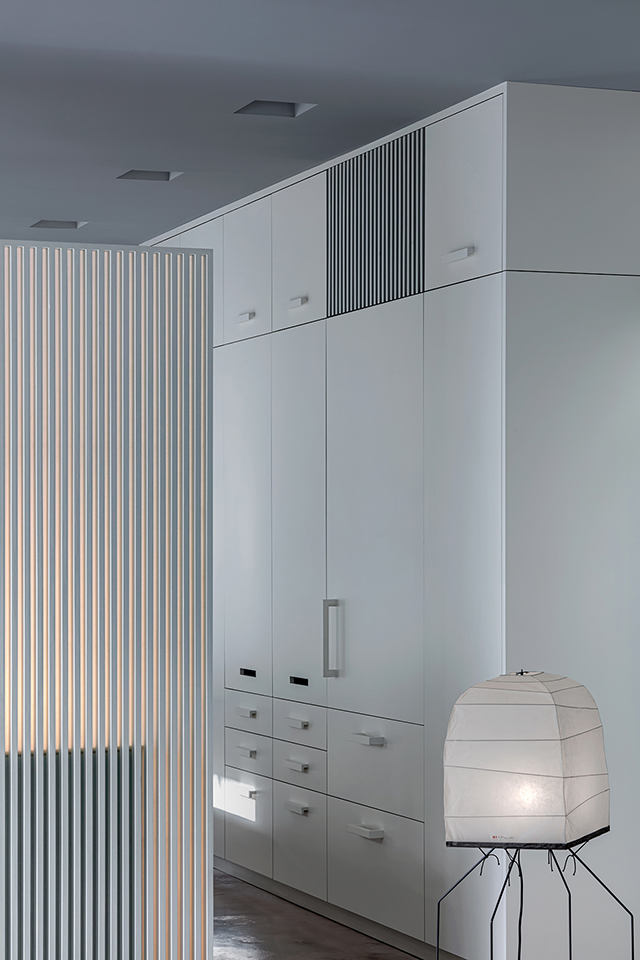 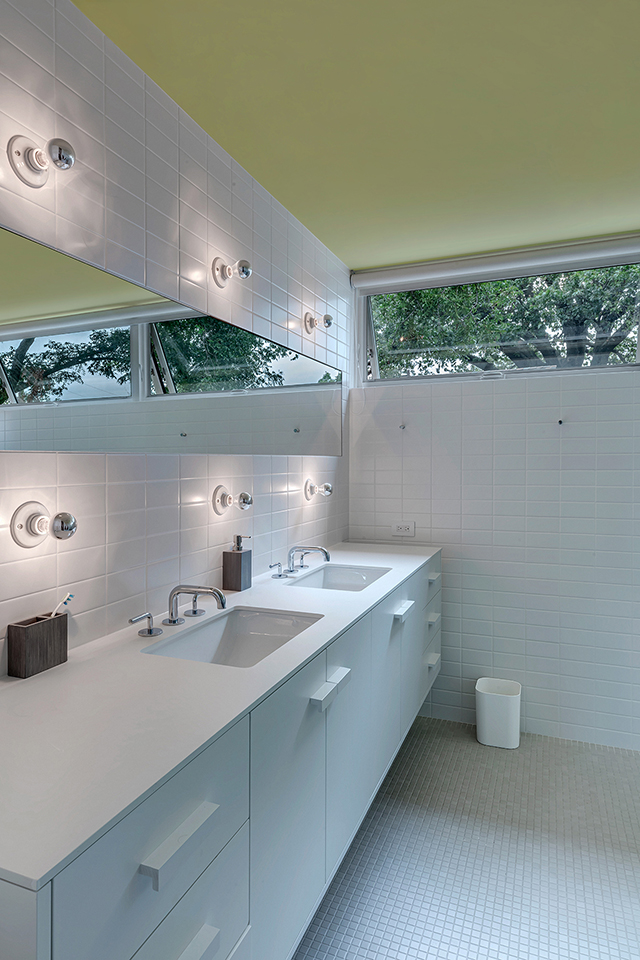 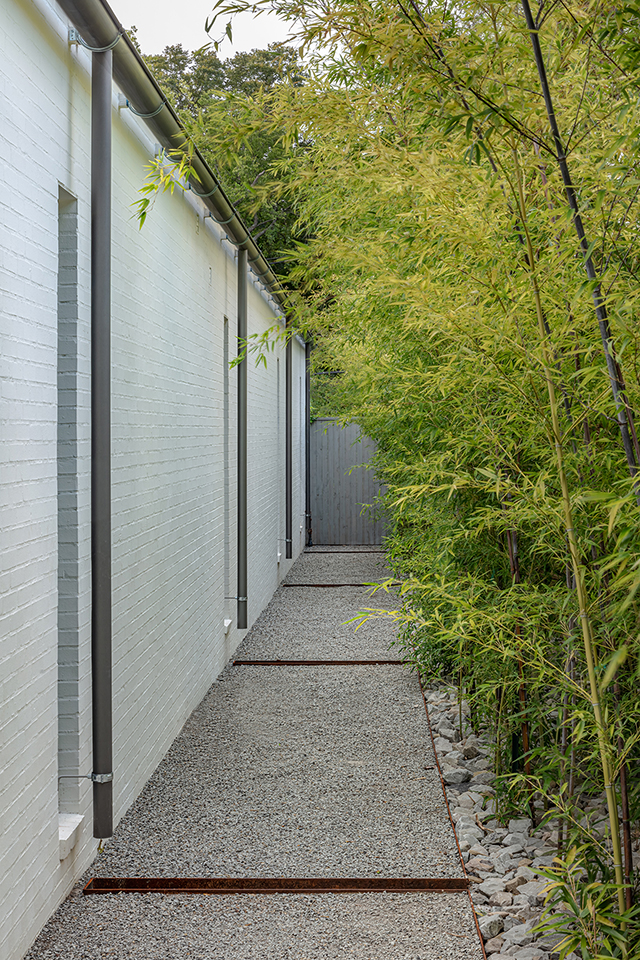 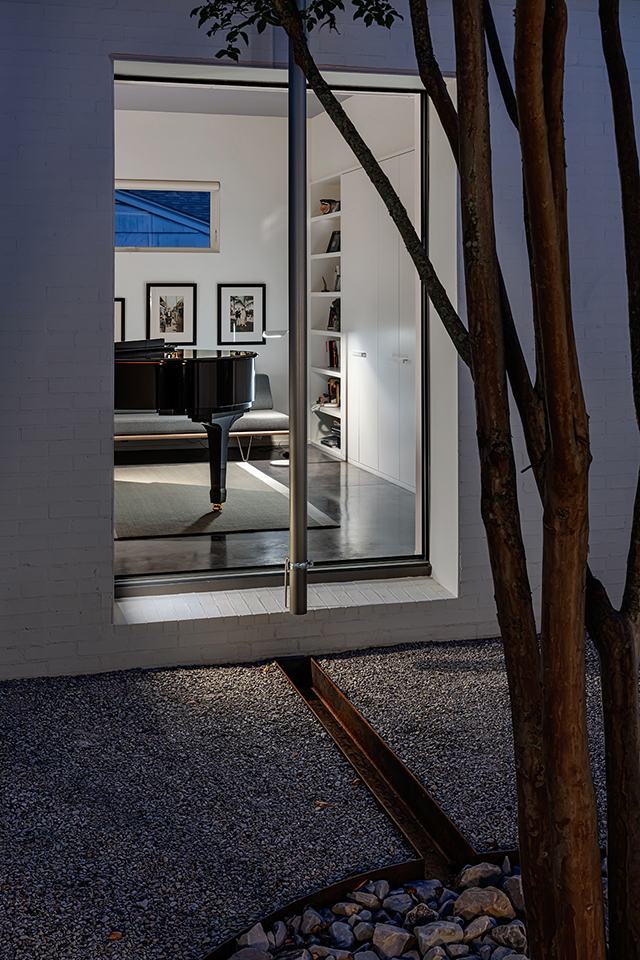 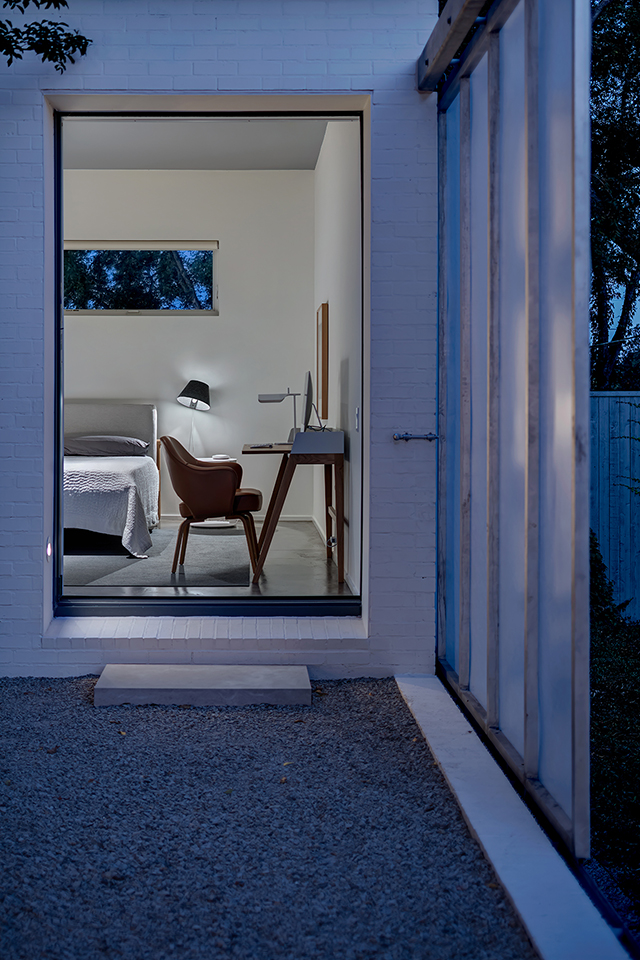 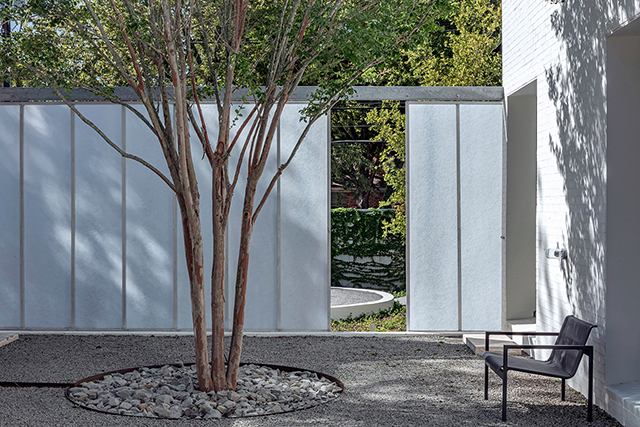 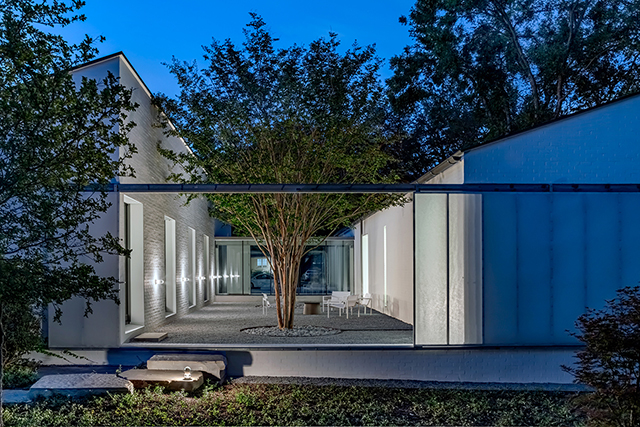 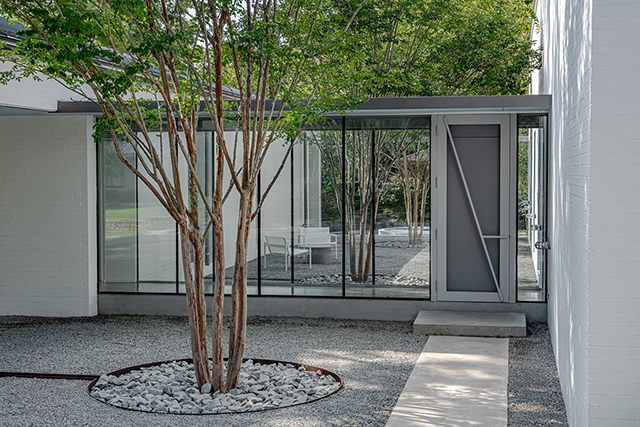 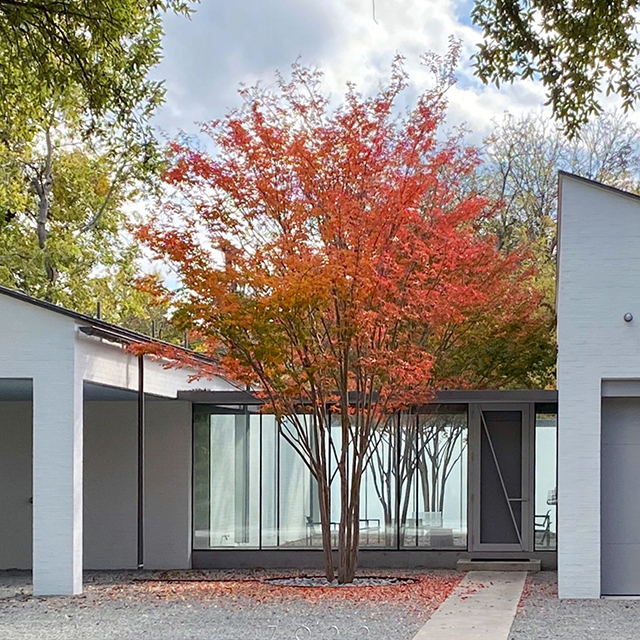 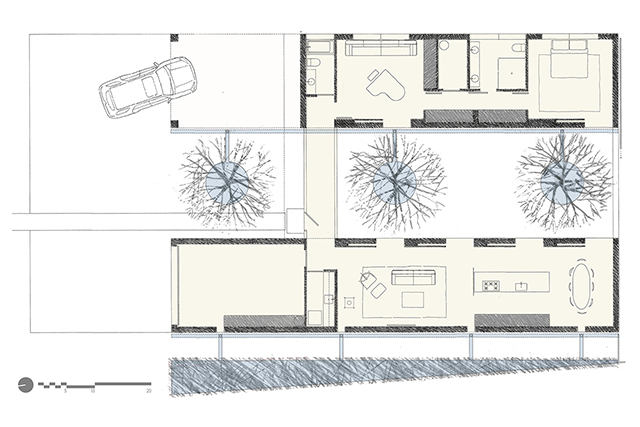 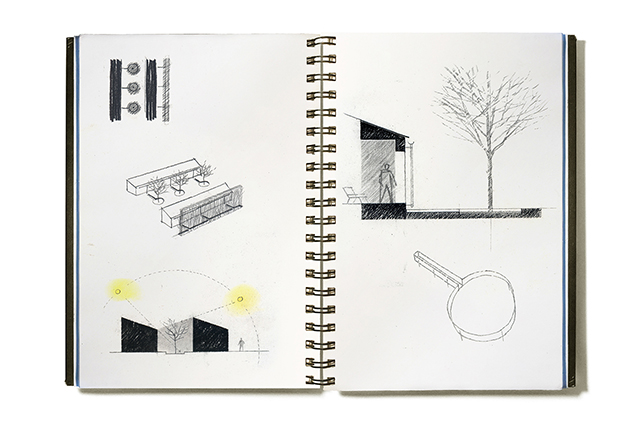 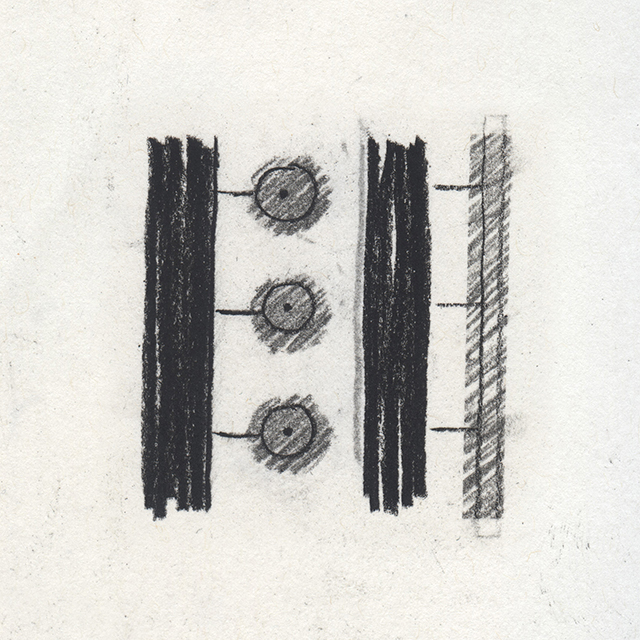