When Neumann Monson president Tim Schroeder, AIA, and his wife found themselves with an emptying nest, they decided it was time to move from the Iowa City suburbs to a closer-in, walkable neighborhood. They were already veterans of a half-dozen do-it-yourself renovations, so they weren’t intimidated by fixer-uppers. They found the perfect opportunity with a midcentury modern house, walking distance from the university hospital system and just across the river from the city itself.

Koser I, as the project was dubbed, was succumbing to its years of neglect. Tim and his wife brought the house back to life as a carbon-neutral home for their family, complete with geothermal climate control and photovoltaic mechanicals. Their interest in carbon neutrality was part of an evolution in lifestyle that also included shifting to a plant-based diet, driving an electric car, and exploring how they could connect more closely to the outdoors and the natural environment. The renovation offered a personal and professional challenge for Tim. “The goal with Koser I was to see how close to zero-energy I could get in a retrofit,” he recalls. “So I could take that knowledge to the firm’s clients.”

Their work on Koser I, completed in 2016, so impressed the neighbors that Tim began to get suggestions about other houses to resurrect. One was just across the street. It was in even worse shape than Koser I had been, and it was devoid of any midcentury charm. Nonetheless, Tim decided to take it on as a speculative project called, naturally, Koser II.

The “new” project house “had no redeeming qualities,” he says. “It had a hipped roof, 7-foot eaves, and 7-foot-8-inch ceilings. I looked at how we could gain some volume inside, and it just wasn’t there. So we just cleared it off and built on the foundation. We had a plan to achieve a house that we could sell at least at a break-even.”

But along the way, he and his wife fell in love with the new project. They added a pool to the scheme and began to develop the property into a true indoor-outdoor oasis that also hit state-of-the art benchmarks for building performance. “It gave us an opportunity to do something that was more of our style,” says Tim. “We tried our best to create a sanctuary—an introverted house that focuses on the courtyard in back.”

The original house was L-shaped, leaving a foundation that Tim could add a “third leg” to and complete the U-shape of a courtyard house. The new pool occupies the center of the courtyard. “As you circulate around the plan, it feels like it has a heart,” he observes. Although the pool season is short in Iowa, the moving, glistening water contributes to the experience of living in the house all year-round.

“The shades over the pool also shudder in the wind,” says Tim, “giving the courtyard a dynamic, kinetic feel. When I was studying in Italy, I visited the pope’s summer home. They had fabric shades there and I thought they were the coolest thing. On our house, they extend the living room when they’re open, because it feels like the ceiling plane continues outdoors.”

The central living/dining/kitchen core benefits most from the courtyard, opening to it with floor-to-ceiling windows and doors. Although the room parallels the street as well, it’s visually protected by a front-facing patio and privacy wall. Windows directly facing the street are elevated to clerestory height.

A “children’s wing,” optimized for future generations in tow, occupies the short spoke of the old L foundation. The two bedrooms are self-contained, each with its own en-suite bathroom and closet.

The master bedroom wing makes use of the new footprint, excavated to create a partial lower level. Not only does the lower level lend a little elbow room to the plan—a den, extra guest room and bath, and utility room—it’s a reassuring refuge in tornado country. Above it, the master bedroom is elevated by a few steps to gain a bit more daylight and a different variation on the courtyard view. A Juliet balcony overlooks the pool. “Elevating the master gives it a bit more presence,” says Tim. 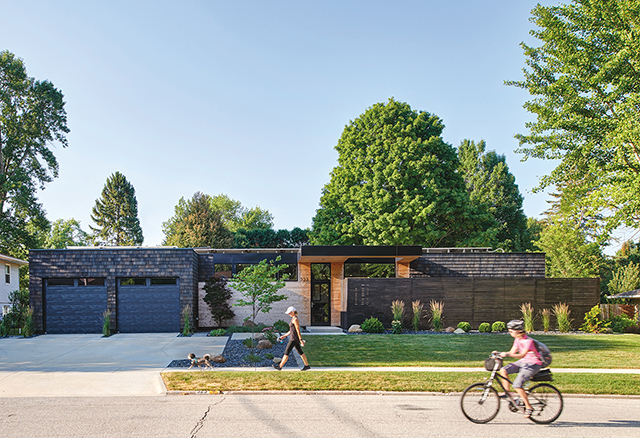 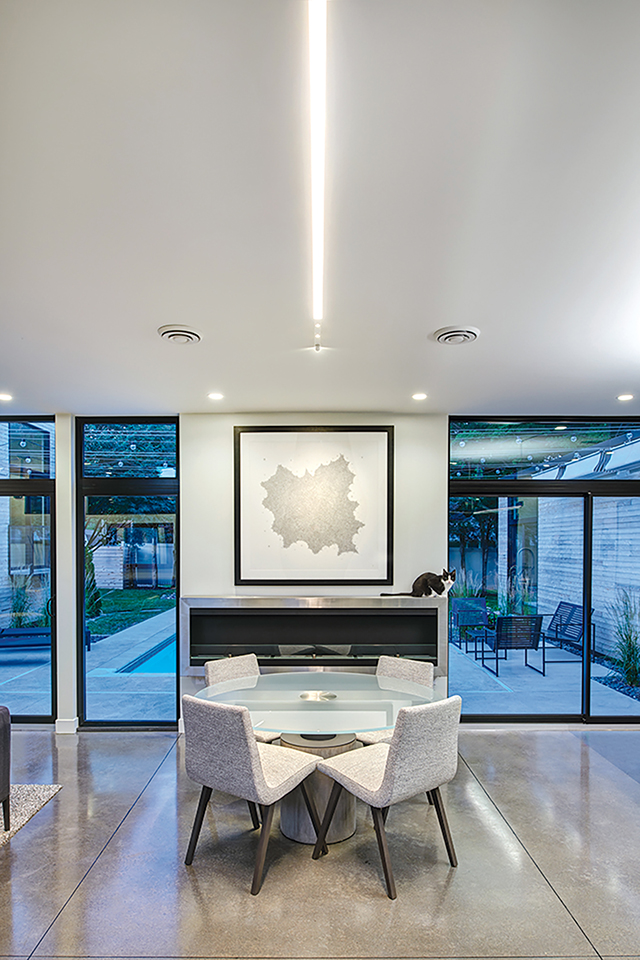 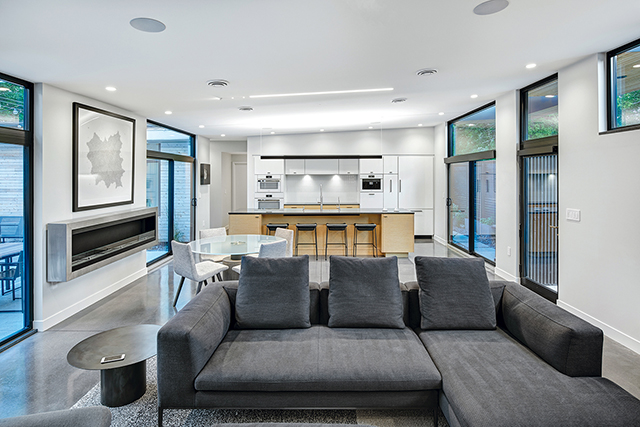 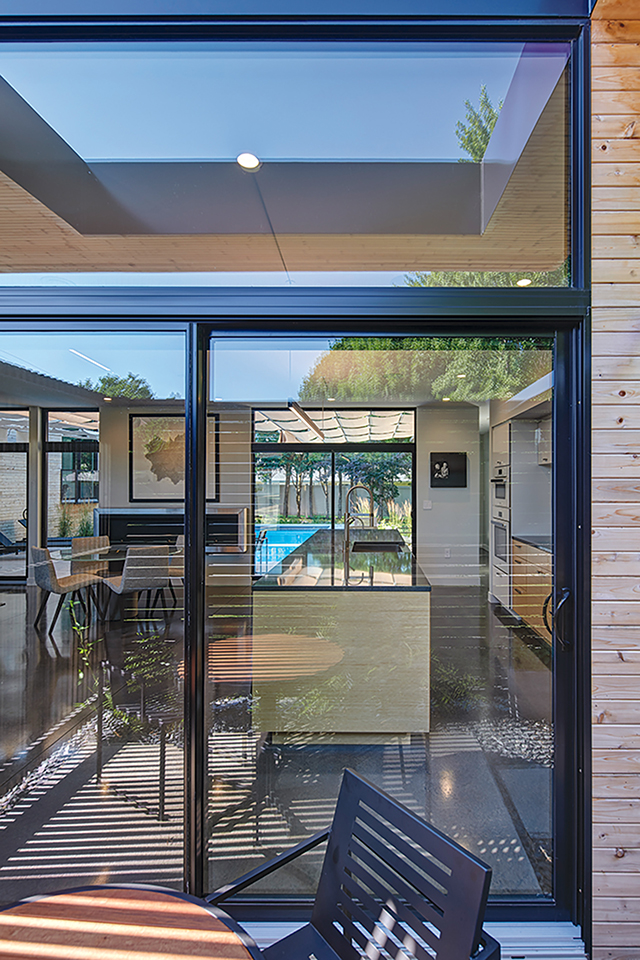 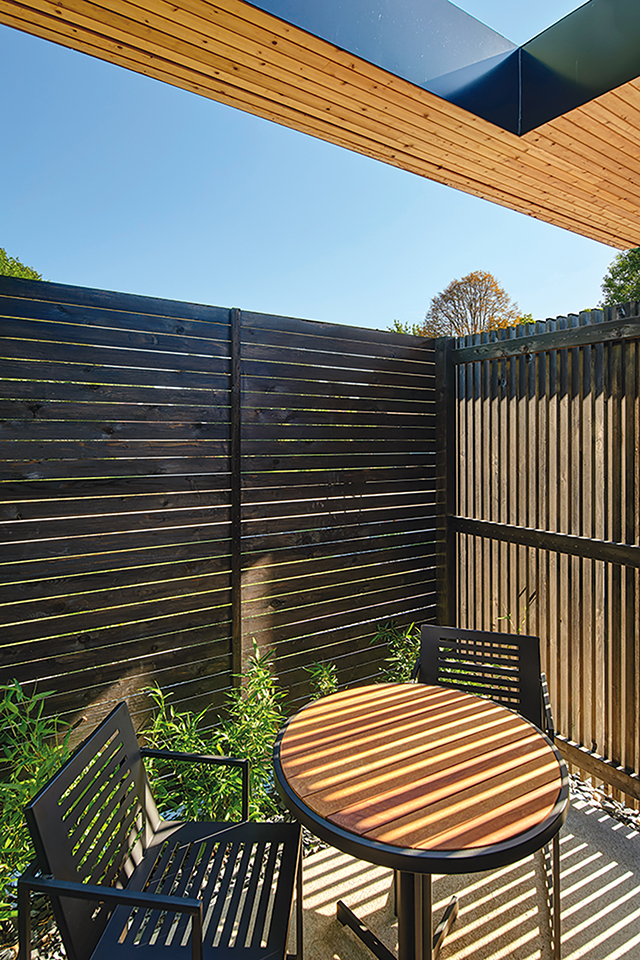 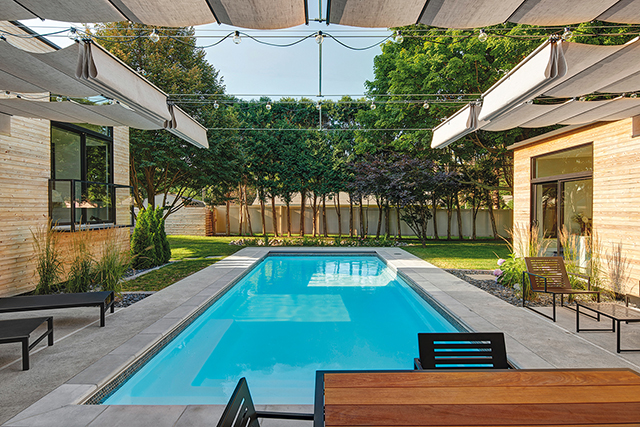 The introverted plan expresses at building skin level with variations in cladding material. Darker, rougher cedar shakes characterize the public face of the house, while lighter cedar siding covers the internal or protected areas of the elevations.

“The dark cedar shake forms an outer crust,” Tim explains. “Where there’s a garden at the front of the house, that represents the skin being pulled away, so there’s smooth natural cedar there. It’s private and secluded. And because the back courtyard is cut out of the floor plan, the building is smooth cedar to express that interiority.”

The rear walls return to the dark cedar shake as they terminate the bedroom wings.

The interiors are simple—indeed, almost spartan—befitting an architect’s refuge. The main living core has radiant concrete floors, built-in Miele appliances that all but disappear, and a serene gel fireplace set at eye level adjacent to the dining area. Bedrooms are ample, but not profligate. 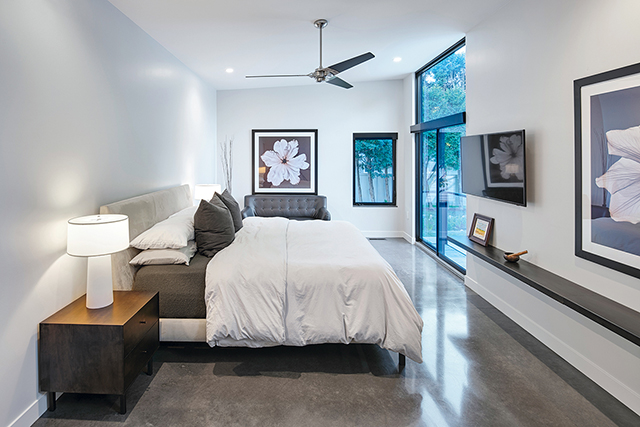 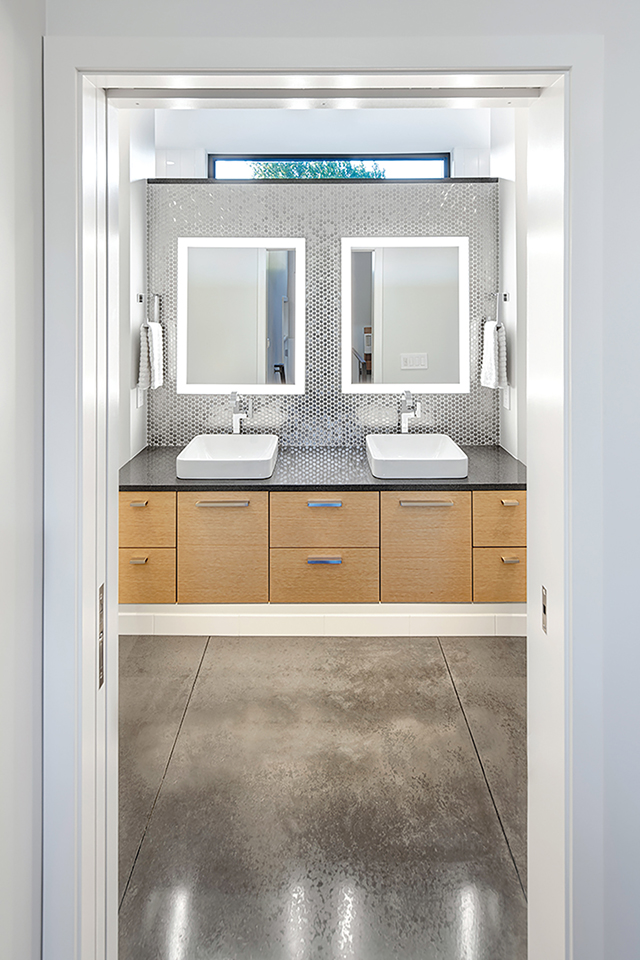 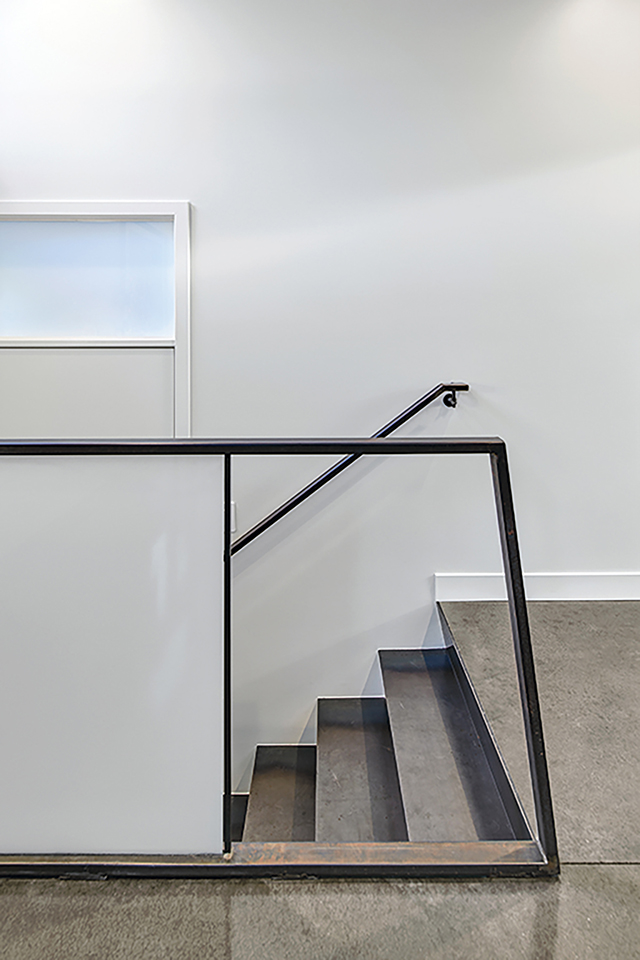 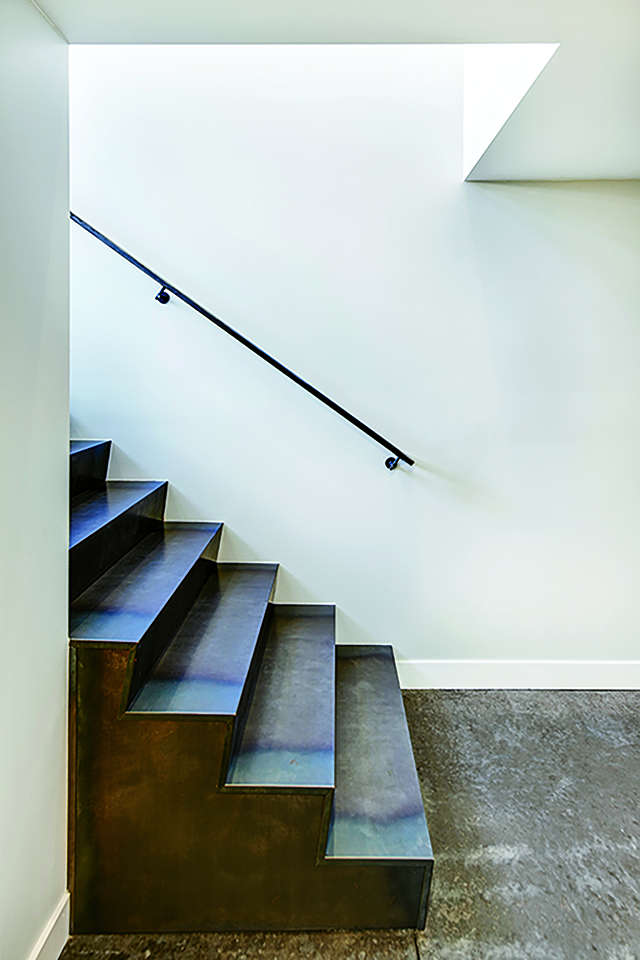 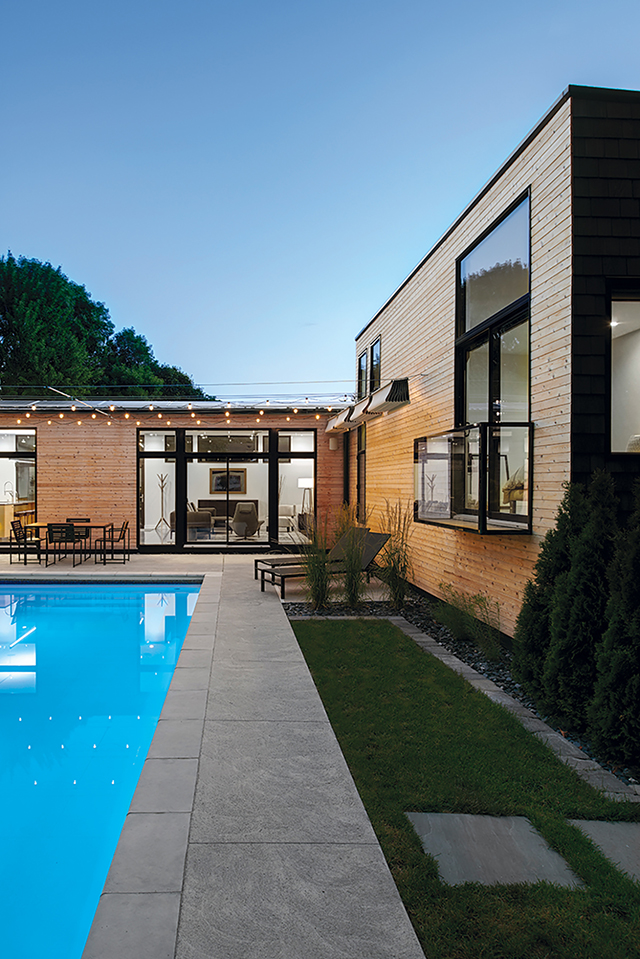 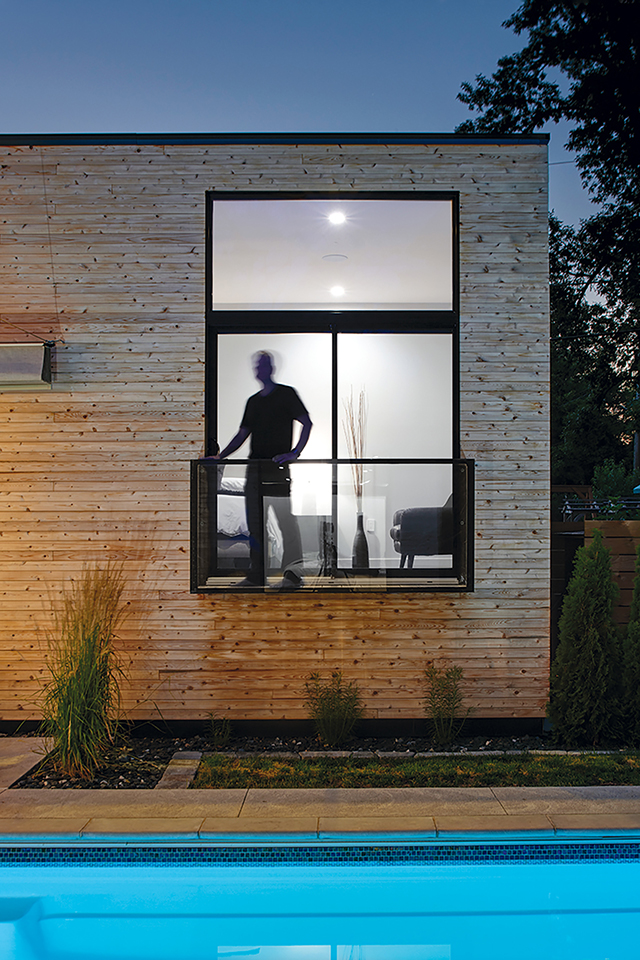 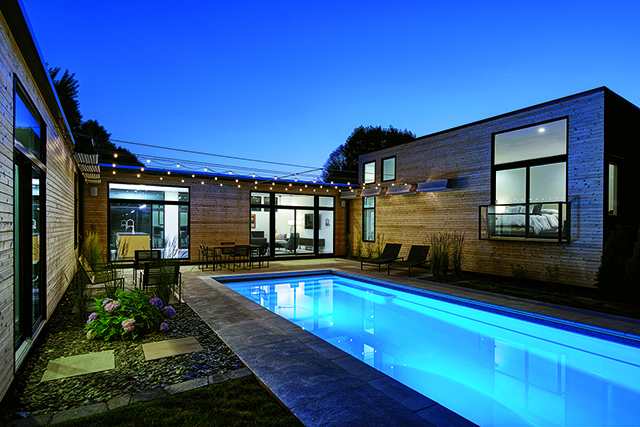 Behind the walls, in the ground, and on the roof lie the home’s zero-energy features. A rigid insulation shell with foamed-in-place insulation gets the walls to R-24 and the roof to R-40. “The walls are closed cell and there’s an inch of continuous insulation on the outboard side of the structure; the roof is open cell with 1½-inch, fully adhered insulation. And the roof slopes south for the photovoltaics,” he says.

“Probably the most difficult task was getting those headers up into the roof, because it was very important for me to get the glass all the way to the ceiling,” he continues. All the glass is double-glazed and low-E.

A topping slab over the old foundation received insulation, too, and radiant heat. Climate control is powered by a geothermal system. “It’s a water-to-water system for radiant heat and water-to-air for the air conditioning. In the summer, we reject the heat from the cooling process into the pool. It helps the system run more efficiently,” says Tim. A 10.08k PV array feeds the mechanical systems, the car charger, LED lighting, and the Energy Star appliances. Water runoff from the roof and deck directs to a “rain garden” at the rear of the property. All told, the house covers its own needs and then some, often sending power back to the Iowa grid.

It’s doubtful Tim’s neighbors could have predicted how much his stewardship of this close-in property would contribute to the fabric of their neighborhood. And how little it would take away from the environment in the process. Odds are, he’ll find them knocking at the door again soon—with another property to transform. 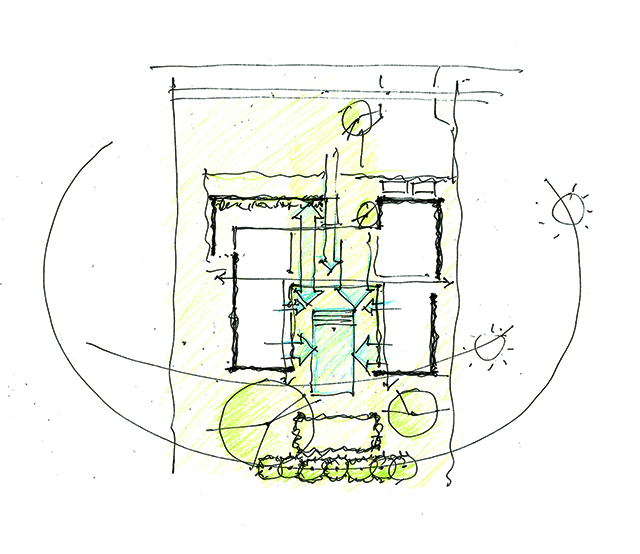 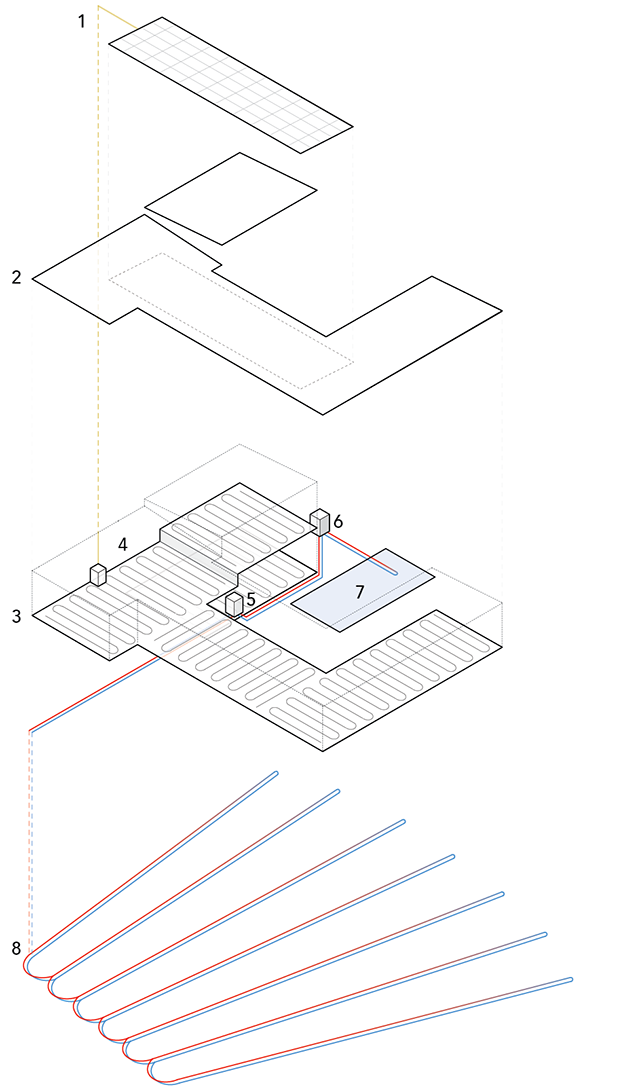 Houses by Robert A.M. Stern Architects Get Their Own Website

AIA Small Firm Compensation Report: How Much Should Your Small Firm Earn?