There’s a tension in San Francisco—and other older urban cores—between preservationists and pragmatists. The Wisconsin Street Residence, a renovation of a former motley Victorian-esque townhouse in Potrero Hill, tripped onto that live wire. The project became a test case, says architect Nick Noyes, FAIA, for “how much you have to leave and how much you can take away.”

That web slowed permitting down by about two years. But Nick and his team put the time to good use, working with neighbors to secure buy-ins for decisions that would affect not only their streetscape but their sight lines of the city, and researching architectural details that would hit just the right note of timelessness. The result is a house that’s not quite traditional and not quite modern. Instead, it occupies a gray zone somewhere between the two—or maybe we should call it a “putty zone.” More on that in a bit.

“One of the clients grew up in a 300-year-old house on the East Coast and really loves traditional architecture,” the architect says. Because she specializes in art and antiques, she also wanted a house that could let those objects take center stage, that didn’t overwhelm with its own character.

Layered atop this list of requirements were California’s multifarious Title 24 standards, calling for—among other worthy but discordant items—photovoltaics. Not exactly a Victorian touch. Restrained, self-effacing, and very adept, Nick steered the apple cart with aplomb. “It’s a little different for us versus some firms in the city. My practice is whatever challenge comes along,” he says. “We don’t come to these projects with a lot of attitude. We answer the client with an authentic response.”

Authentic, but inventive. Ultimately, not much remains of the original pastiche of a house ridden with rot, and what took its place is pure architectural interpretation and response. For the new front façade, Nick and his colleagues spent the day driving all over the city to look at dentil moldings.

“We had debated about what’s a nice-looking cornice, what’s overdone, what’s tacky. And that’s how we arrived at an abstracted cornice where the proportions are a little off—it’s a little more modern nod to the historic stuff,” he says. “We were not really constrained by any particular historic period. Many versions of Victorian in the city were done by builders and craftspeople who were not following any rule books.”

Similarly, trim around the windows and entry door add dimension to the front façade, in a highly edited, modern way. The living room’s ganged windows evoke a traditional bay window without the projecting elements.

Make note of the flattened-grid motif on the front door and garage door, because you’ll see it reappear in the mudroom, kitchen, butler’s pantry, and the main bedroom and bathroom. These visual refrains help tie together the eclectic mix of elements of the interior architecture. 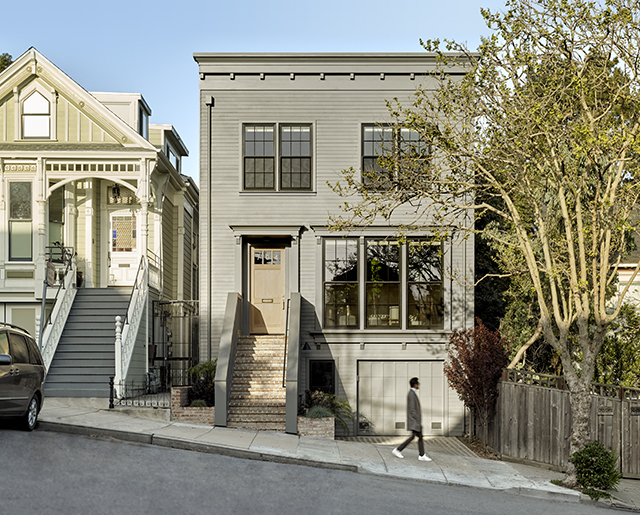 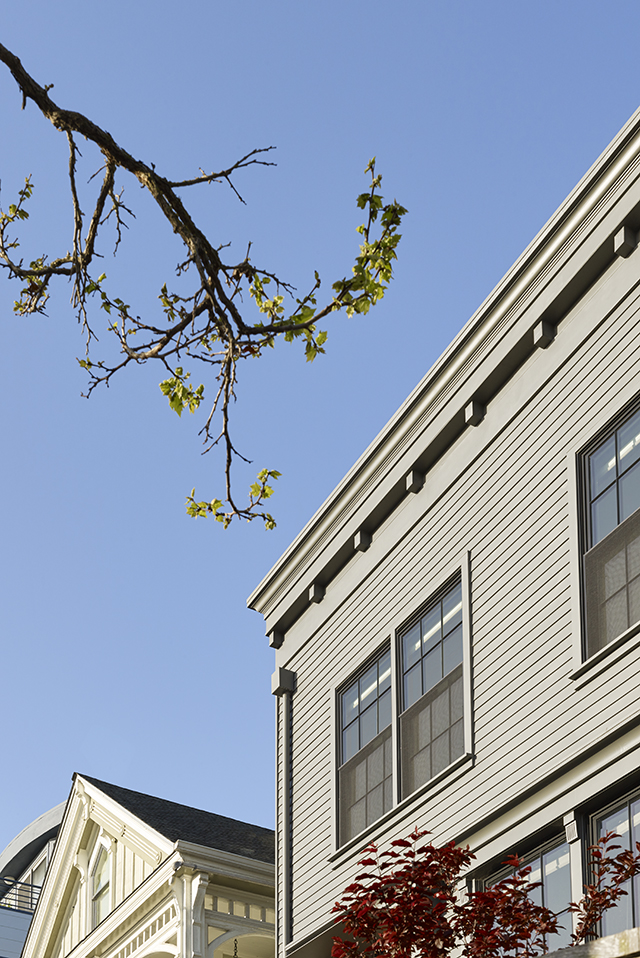 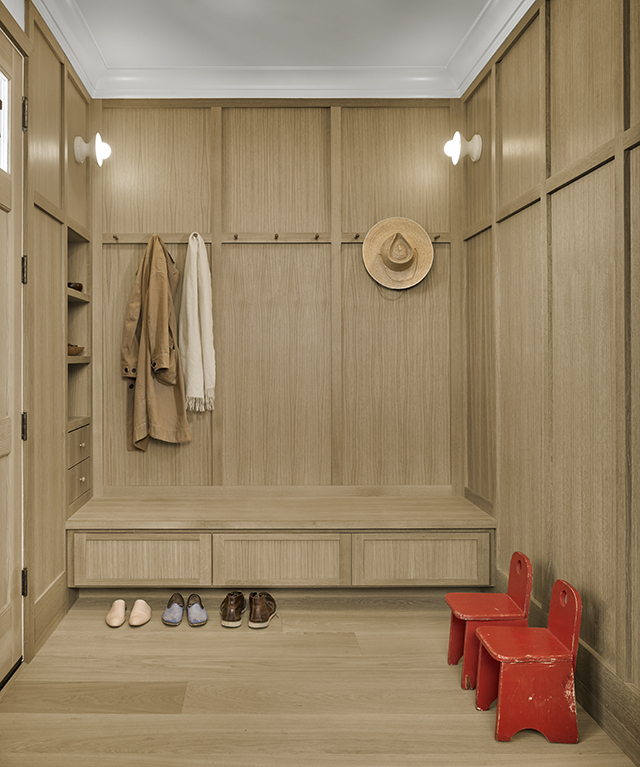 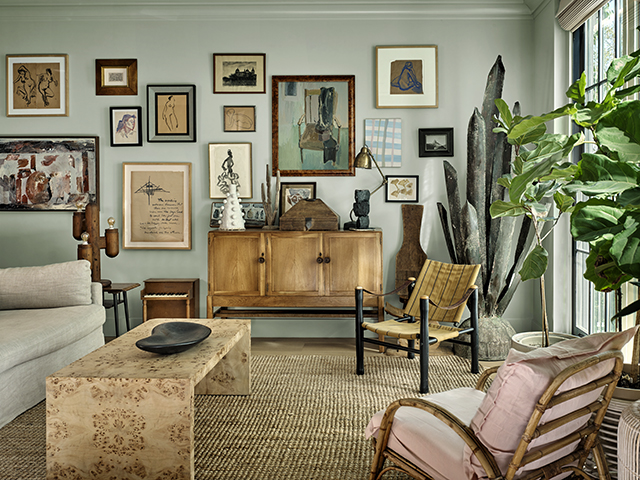 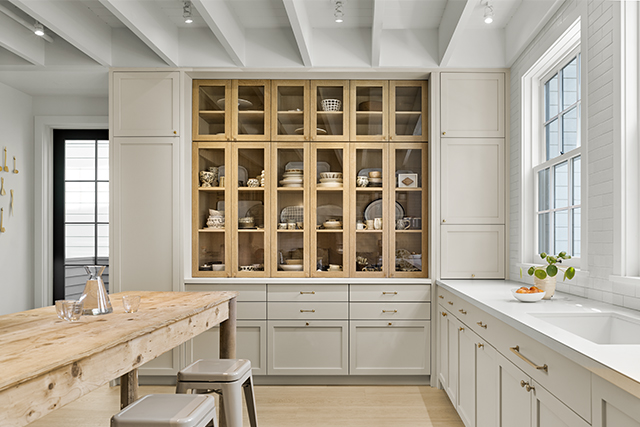 What Time Is It?

Is that steel door system in the dining room from the 1940s? What about the almost Deco butler’s pantry with its rich jewel tones and antique brass sink? And then there’s the Connecticut farmhouse kitchen, with salvaged wooden swing doors and farm table instead of the typical center island. Those who collect antiques and art thrive on that dialogue of difference—varied styles from varied time periods. Achieving harmonious discourse among them, however, requires a maestro’s touch.

“We definitely tried to keep the interiors as clean as possible,” says Nick. “There’s not a lot of fancy stuff here. It’s not a house where they said, ‘Don’t worry about the budget.’ The materials are all straightforward ones applied in a modern way.”

Floors are engineered white oak over radiant. Clear straight grain oak appears in the mudroom as veneer panels and in solid stock for the kitchen cabinets. Daltile subway tiles line the kitchen and shower walls in the main bathroom. Simple horizontal wood siding with a nickel gap detail backs the main bathroom vanity and w/c areas. In the main bedroom, the flat panel grid reappears, turning the wall behind the bed into a headboard and hiding the ungainly details of a code-required, fire-rated steel window.

Possibly the most modern touch in the project is the articulated switchback stair. Awash in natural light from a clerestory up above, the stair hall serves as a mini art gallery for the clients’ collection.

However, taken as a whole, the house succeeds in its goal to be neither one thing nor the other, but something solidly, beautifully in-between. Not a gray zone, which suggests overt modernizing of something older, but a “putty zone” that muddies the difference between then and now.

“There was tons of back and forth on the façade color,” says Nick. “The clients wanted white, but I explained to them, you really want a color that isn’t a color. Sometimes it looks more gray, sometimes more putty. I learned that from my time at Leddy Maytum Stacy. You’re not really looking for a color, but for a tone you can’t really describe.” 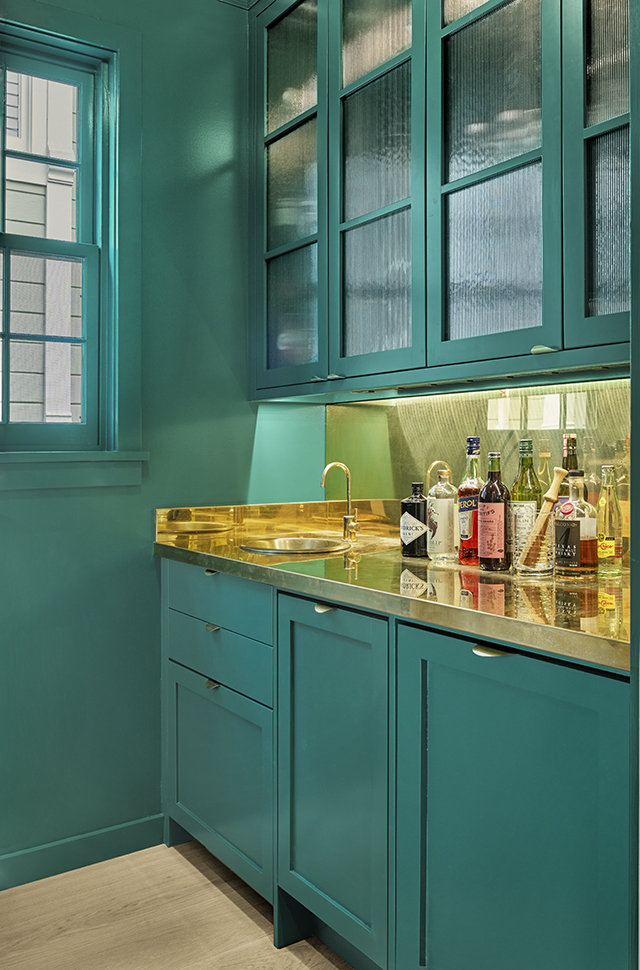 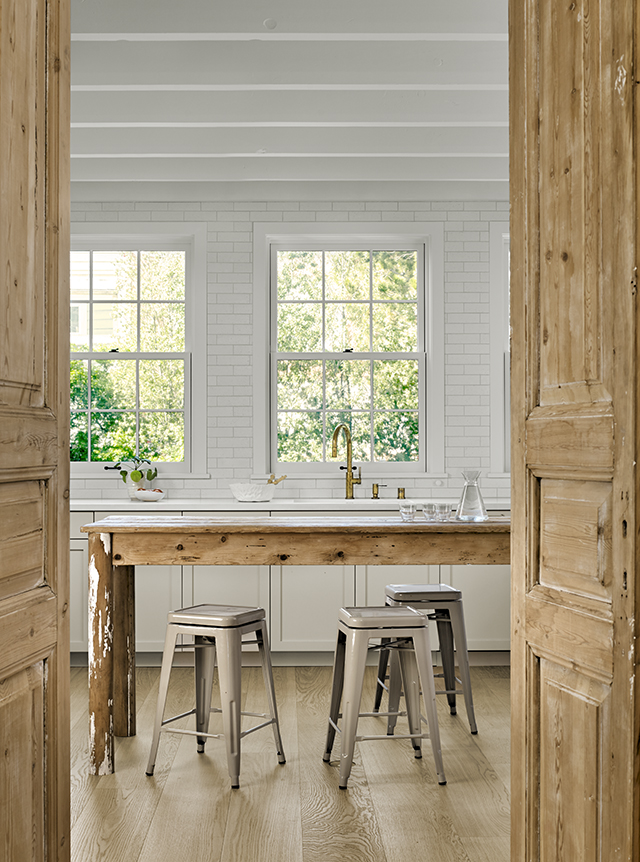 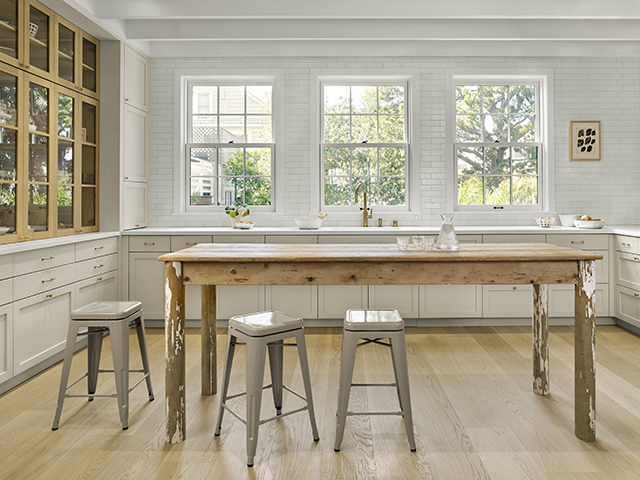 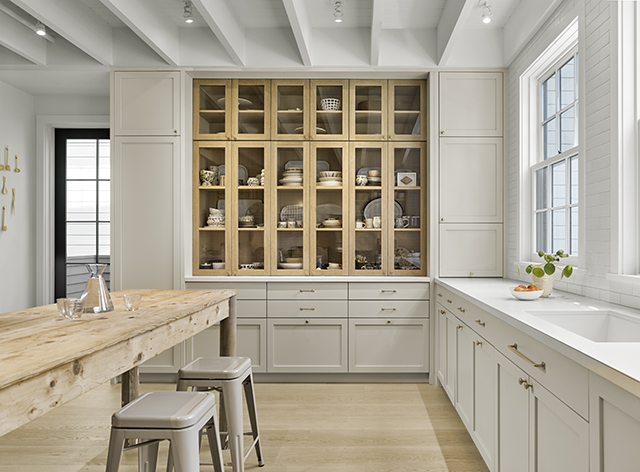 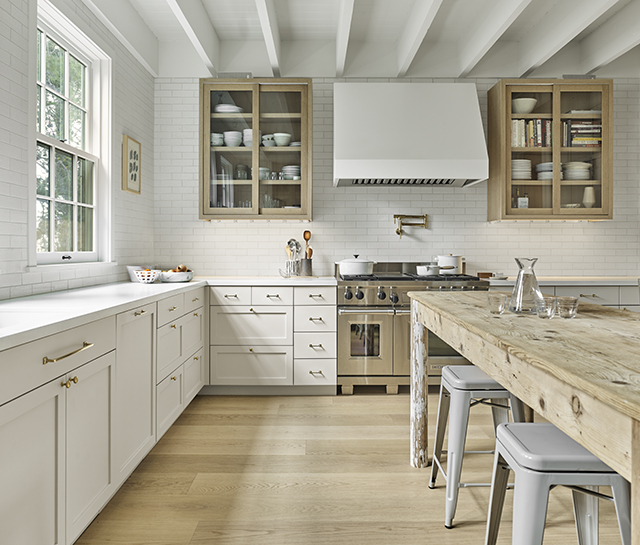 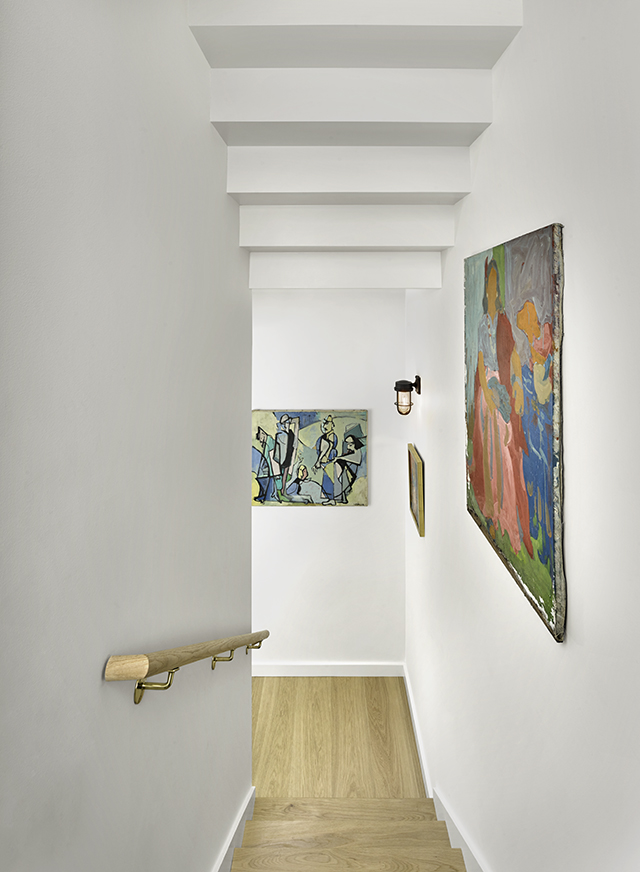 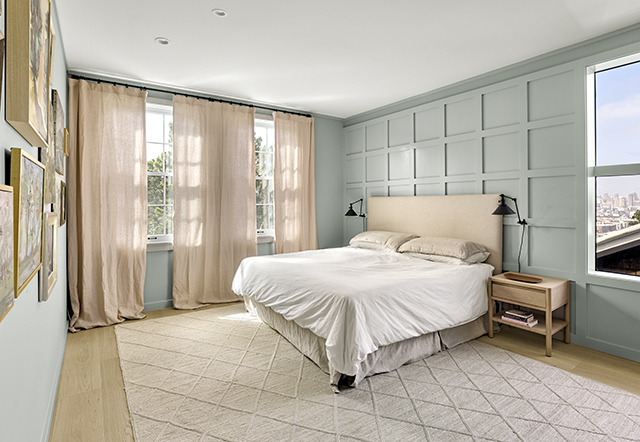 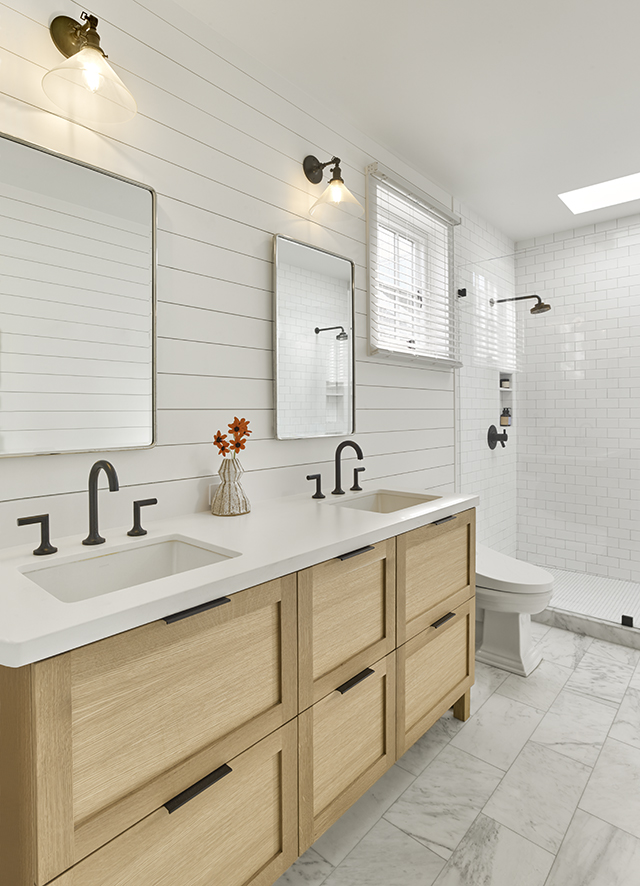 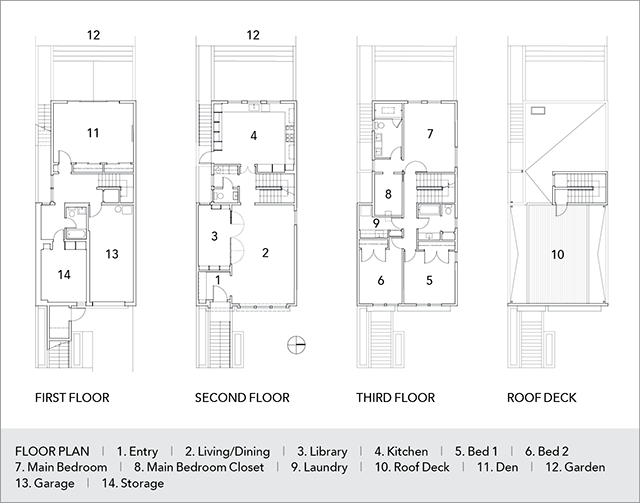 Private Residential Spending Is on the Rise

There’s a tension in San Francisco—and other older urban cores—between preservationists and pragmatists. The Wisconsin Street Residence, a renovation of a former motley Victorian-esque townhouse in Potrero Hill, tripped onto that live...

“A house’s aesthetic is earned from the process of making a good place experientially,” says Gregory Faulkner, AIA. “If you make good decisions with those experiences, the appearance is good. It becomes...