It can be a blessing or a curse to remodel the work of another architect, but for Mark Wellen, FAIA, of Rhotenberry Wellen, this project in his home base of Midland, Texas, was a date with destiny. Designed in the 1960s by Dallas architect Bud Oglesby, the house is a landmark for the architectural cognoscenti of Texas regional modernism.

“I always admired this house. I bought a tiny house a block away and I would walk by it frequently,” Mark recalls. “At the time, it was still in the hands of its original owner, an older widowed lady. She gave me a tour back in the 1980s, and we would visit with her on the street. Eventually, she decided to move to Austin to be near family. It went through a series of owners after that.”

A number of those owners reached out to Mark about remodeling the house, as did a couple of his own clients. But for years, the planets didn’t align for the job to happen. “Then a good friend bought it, and the Realtor was also a friend. That put us together.” What sealed the deal was everyone’s mutual respect for the original house. They were all adamant that any changes had to be in the spirit of Bud’s work.

The result is a remodel so subtle it looks like a restoration, with many interim “remuddles” purged. “It’s one of the best houses I’ve ever seen in Texas,” says Mark. “It’s true post-and-beam construction, just like a barn, and an incredible design—so pure. It’s all St. Joe brick and vertical grain Doug fir. The things we tore off that were done incorrectly were not that difficult to take off.” 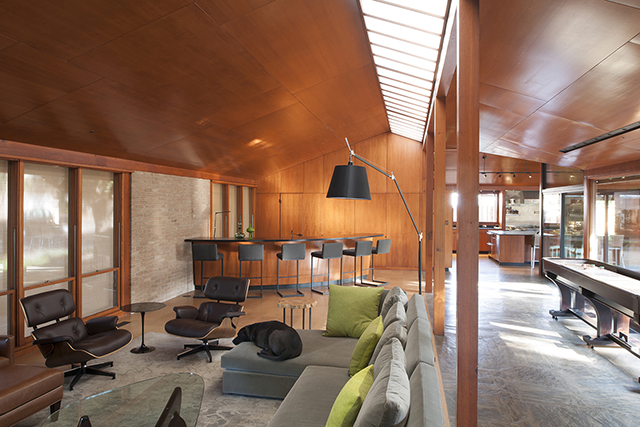 The new owners asked for the typical amenities of contemporary life—a bigger kitchen open to a dining area, an expanded main bedroom suite, a pool, and additional indoor and outdoor recreation areas.

The house benefits from “rare topography” for the otherwise flat area, allowing it to keep a low profile on the front elevation and then open to a more layered, exuberant elevation in the back.

On the main level, Mark and his team got the elbow room they needed for the expanded kitchen and dining area by pulling off the carport at the back of the original kitchen and relocating a new one to the south. “I liked the carport,” he says, “but we were able to maintain Bud’s parti: it’s a square donut—a perfect square with a square courtyard in the middle.

“The inner courtyard roof is lower than the outer, with a clerestory window that wraps around it,” he explains. “That detail and section was predominant in architecture of the ’70s, to bring light in. And it’s so adroitly done here. It looks like a roof that sheds from the courtyard all around.” 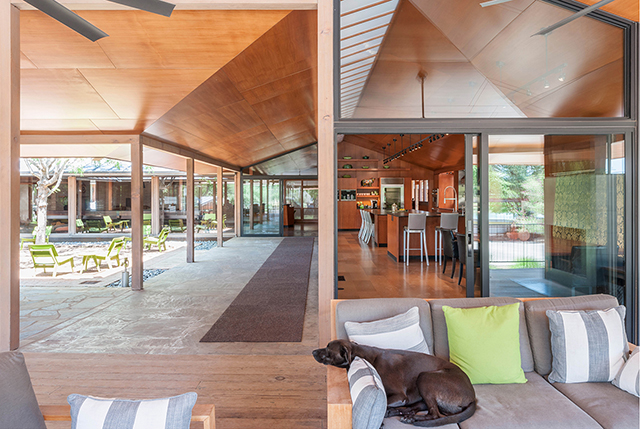 On the interior, high-quality existing materials—old-growth vertical grain Doug fir, Doug fir plywood panels, and original flagstone floors—were touched up and repaired. Sliding glass doors were reglazed with insulated panels; and the failed clerestory glass was replaced with frosted glazing “to hide the sins of ductwork,” Mark says. But the clerestory still works its magic. “It was beautifully executed. Reflected light goes through the screens and hits all the shed ceilings.”

In the renovated kitchen and main bathroom, fresh materials hew to the restrained tones of the original palette—slim, absolute black counters in a leathered finish, new Doug fir cabinetry, and cork flooring. “For the flooring, we needed something fairly thin,” says the architect. “So, it was carpet, thin tile, or cork. Hardwood floors were too thick—even the engineered flooring. And we felt the cork was more in keeping with the character. We gave it a monochromatic finish. Along with the flagstone that darkens over time, it’s almost like being in a cigar box.” 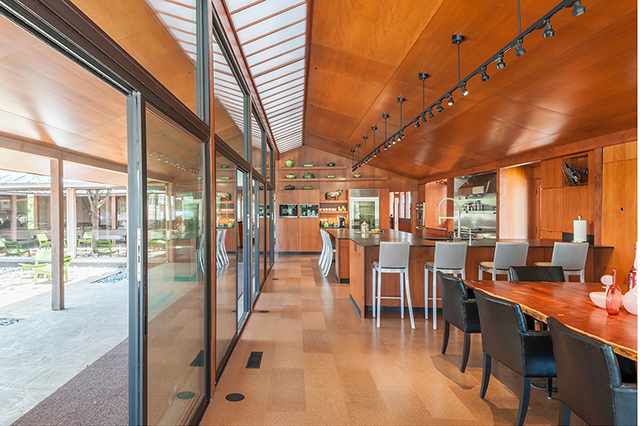 For the main suite remodel, Mark repurposed an extra bedroom into a large, walk-in closet, reinvented the bathroom, and improved the appointments of an adjacent porch. He added a steel outdoor fireplace and had the vertical grain redwood decking cleaned and restored. Just underneath the porch decking, new grooved metal strips direct water away from a patio lounge area below. 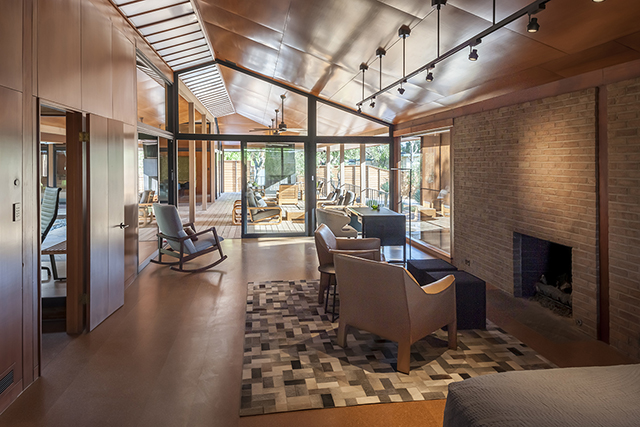 Taken as a whole, the artful changes subtly and appropriately update the appearance and function of the house, without imposing on the original vision. Sensitively and masterfully done, it was the renovation worth waiting for. 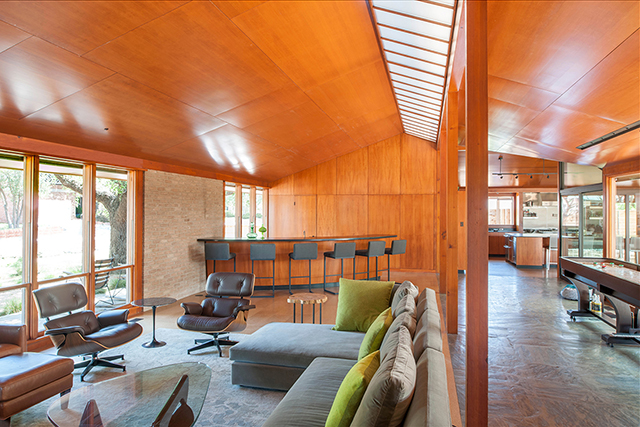 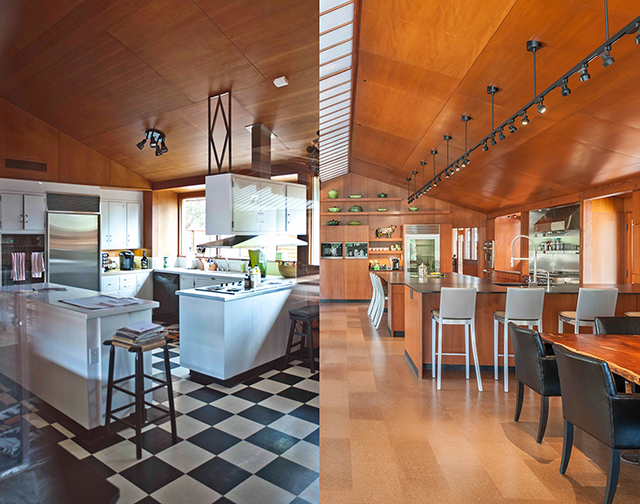 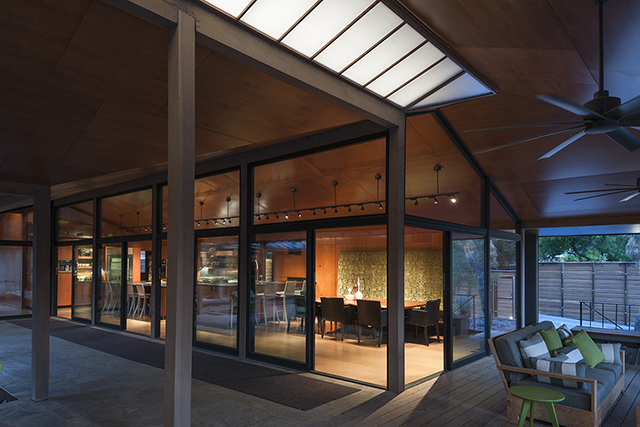 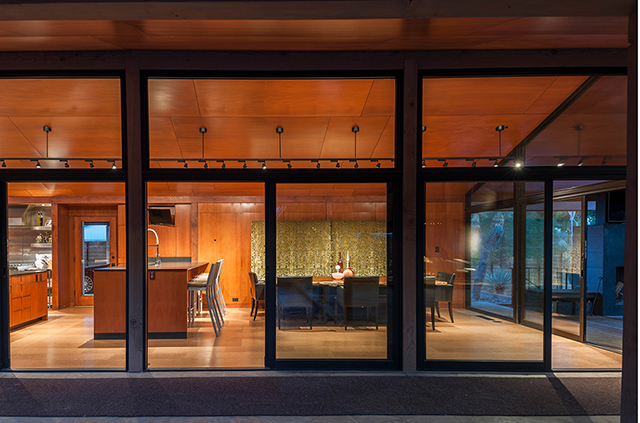 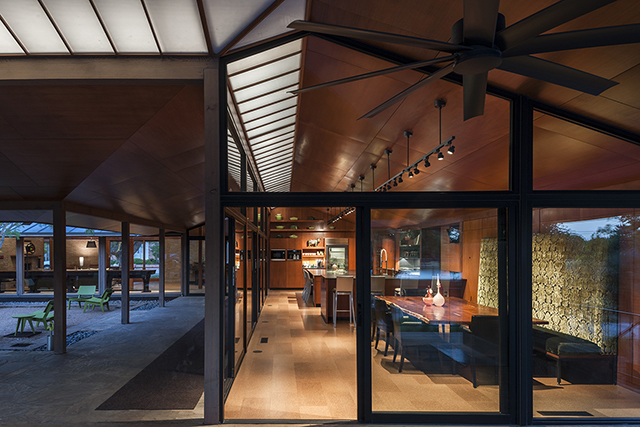 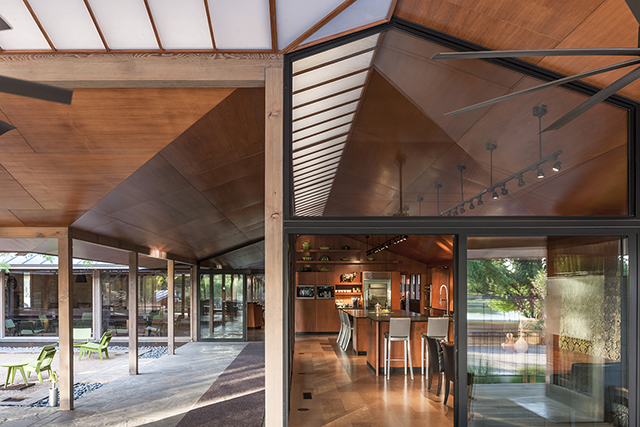 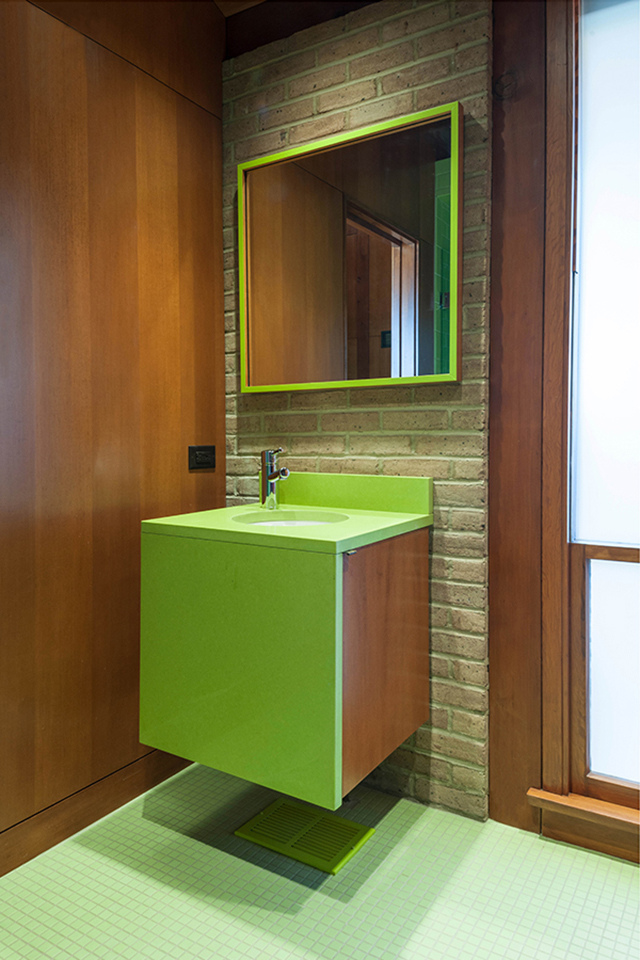 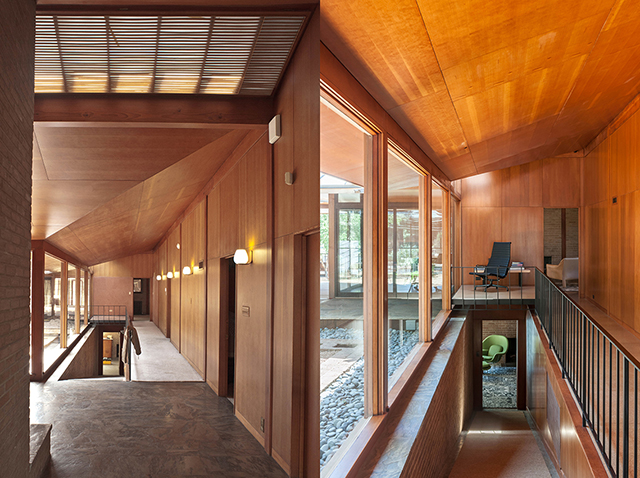 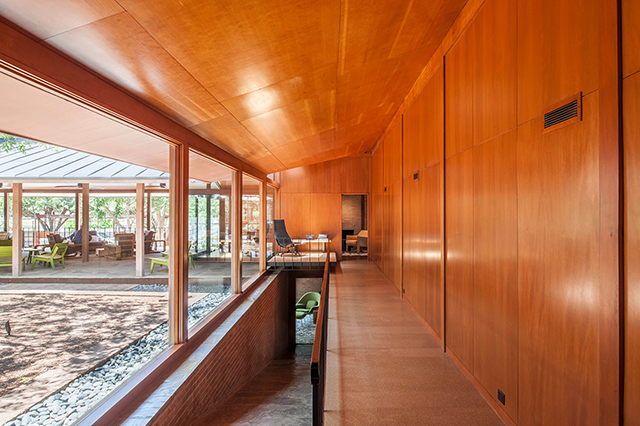 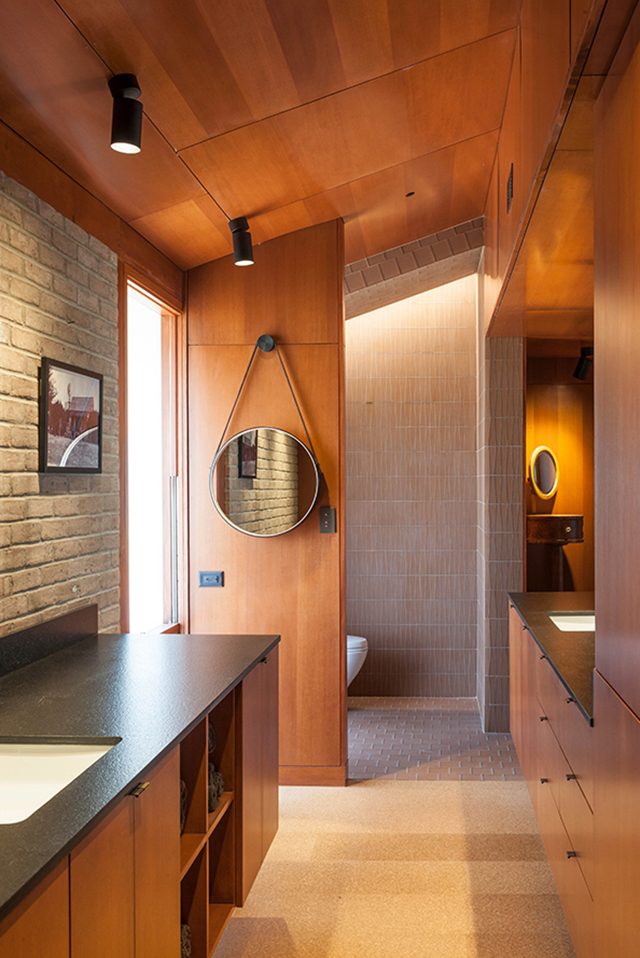 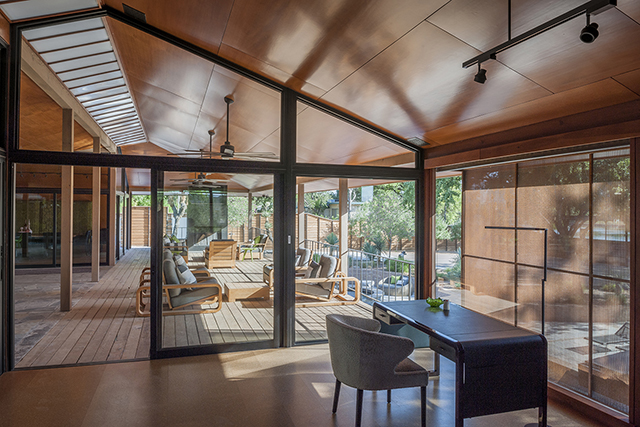 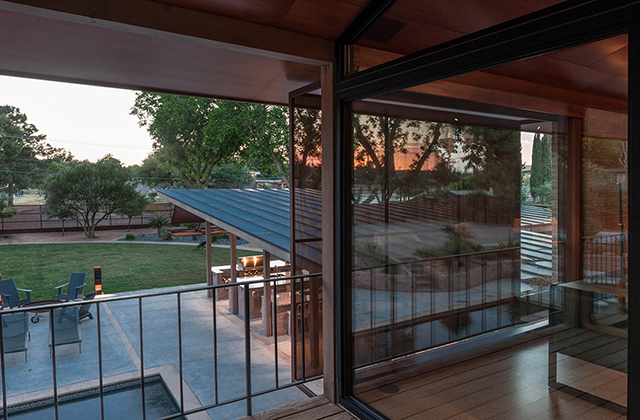 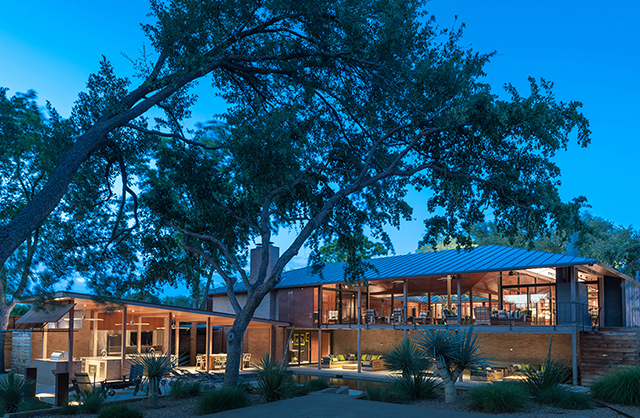 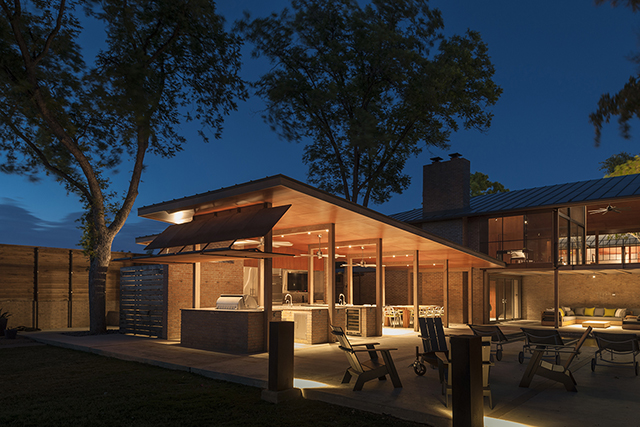 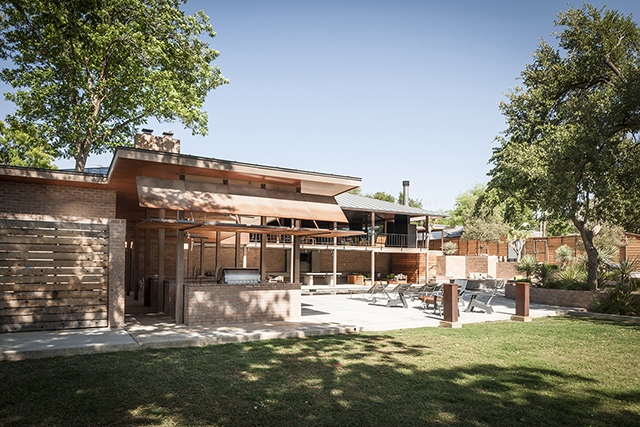 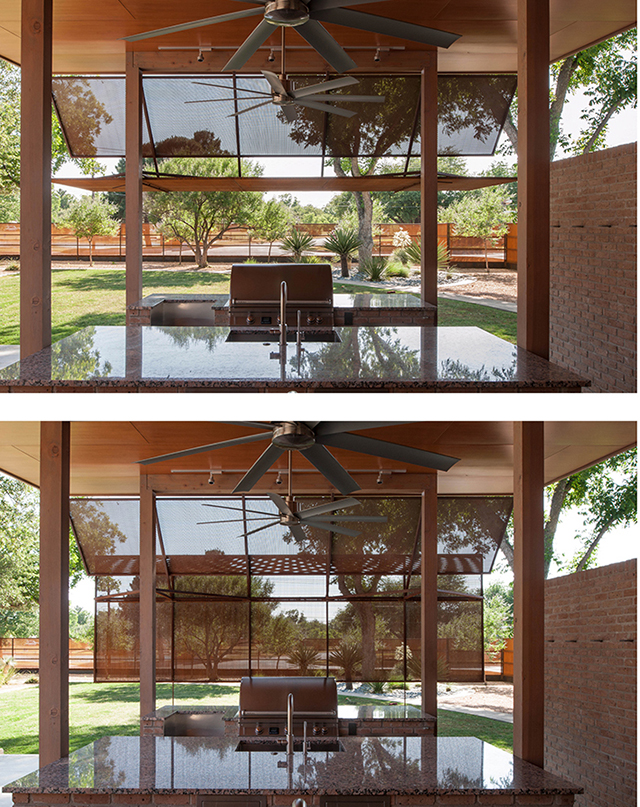 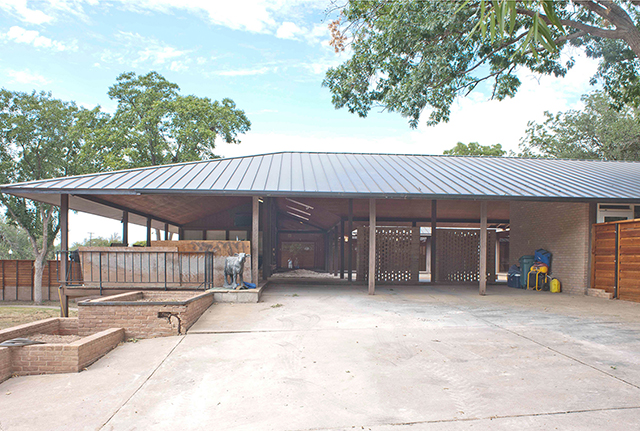 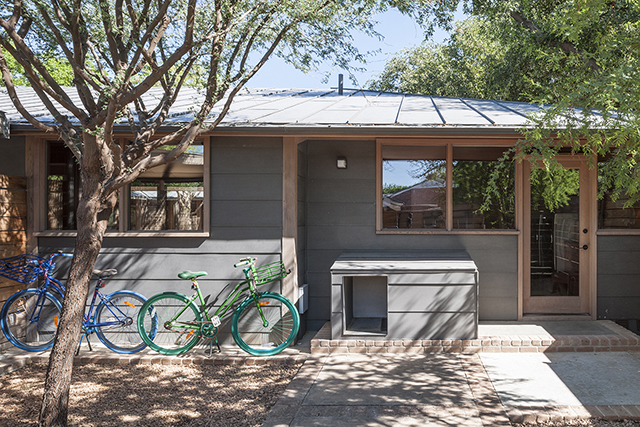 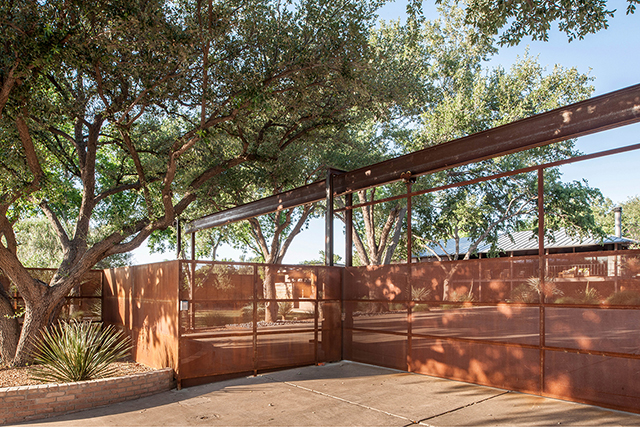 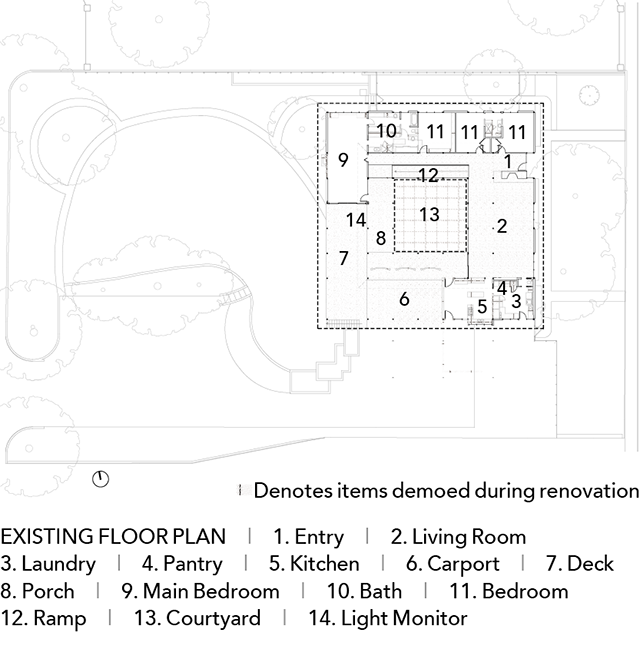 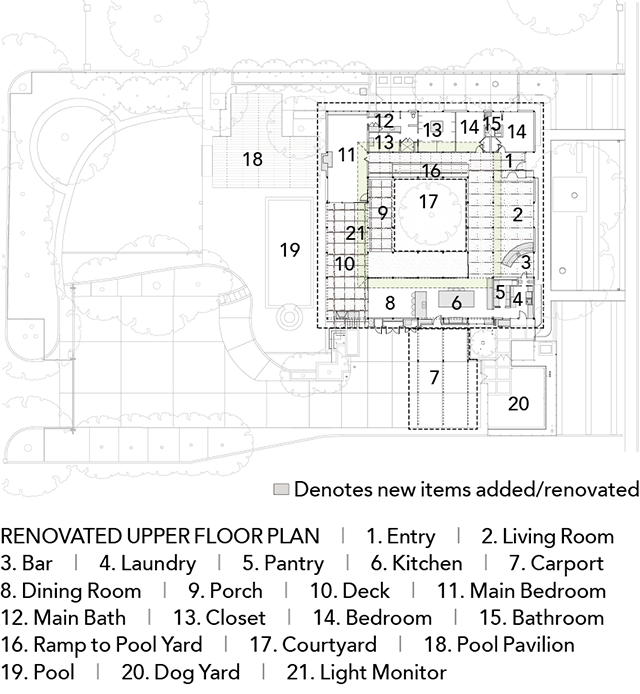 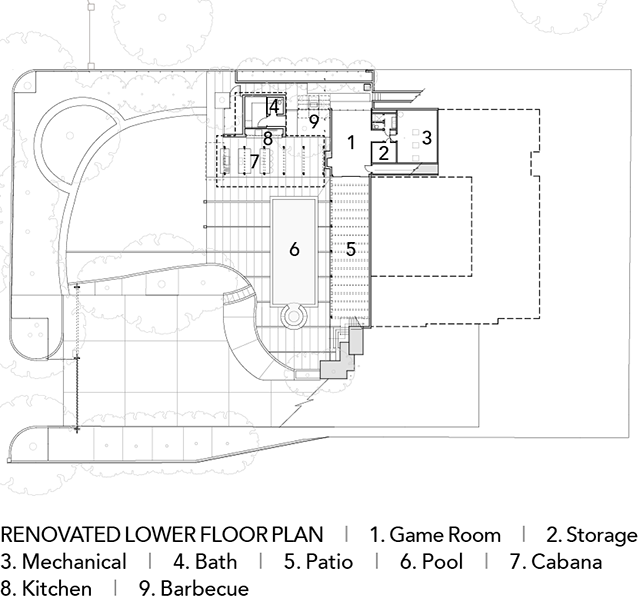