Architects Joe Sadoski, AIA, and Kipp Edick met as teenagers at the Rowmark Ski Academy in Salt Lake City, which draws students from across the U.S. They lived near the school with the late Alan Hayes, a ski-racing coach who would become their mentor. After high school, the two young friends found themselves on a parallel career track, not as professional athletes but as architects. They went on to earn graduate degrees in architecture on opposite sides of the country, Joe at the University of Oregon and Kipp at Yale.

Although the two kept in touch, their professional paths might never have crossed had it not been for a call from Alan, asking if they would design a full-time house for him along the western front of the Wasatch Mountains. Joe was just leaving grad school and Kipp was working for Adjaye Associates in New York. “We had done our own things, and we came back together and talked, ‘Can we do this? We had never worked together and were on opposite coasts,” Joe says.

They decided they could. In addition to their similar modernist sensibilities, the two benefited from knowing their client well. And having lived with him for several years, they were familiar with his domestic routines. “Coming from the University of Oregon, I could push some of the sustainability aspects, and Kipp could bring his design-forward and technical experiences from working at David Adjaye’s office,” Joe says.

The project kicked off with a design workshop in Salt Lake City. After many sketches studying massing and daylighting strategies, a model was made and the concept was set. “We came into the picture as kids who got to know the client by living with him as part of the ski program,” Kipp says, “so we were able to synthesize the program in a clear and clean way, and the design kind of followed.”

Several requirements drove the design, and because of the long, slim site—57 feet wide by 169 feet long—there were only so many ways to vary their early diagram. One request was for a three-car garage, which started to dictate the house’s dimensions. Another was for one-level living, and the other was a request for privacy. In a community of tightly spaced lots, that desire drove the house’s expression. “He had close relationships with kids, family, and friends, and wanted to live in a private space filled with daylight,” says Joe. “In shaping the house, we needed to figure out where we could dump in a lot of light” without exposure to the neighbors. 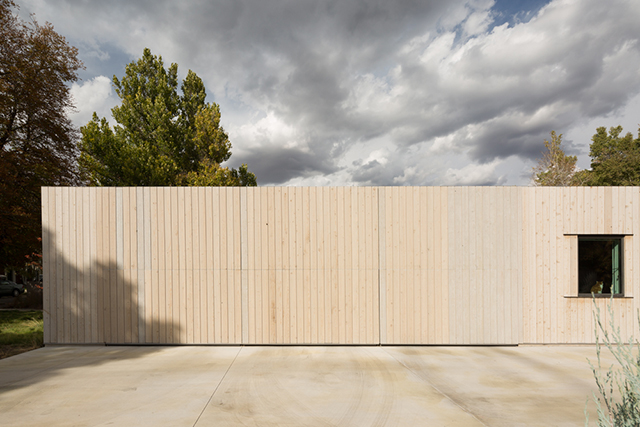 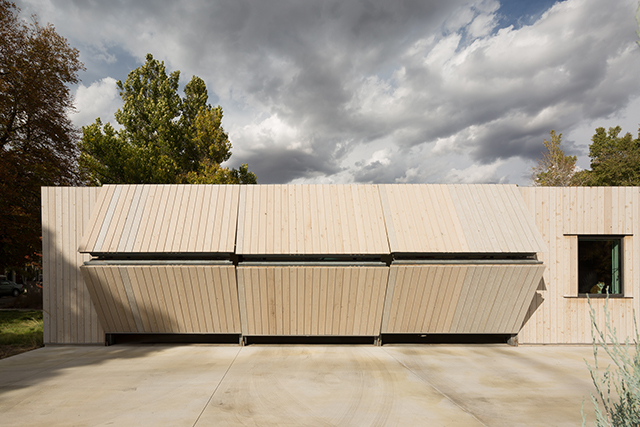 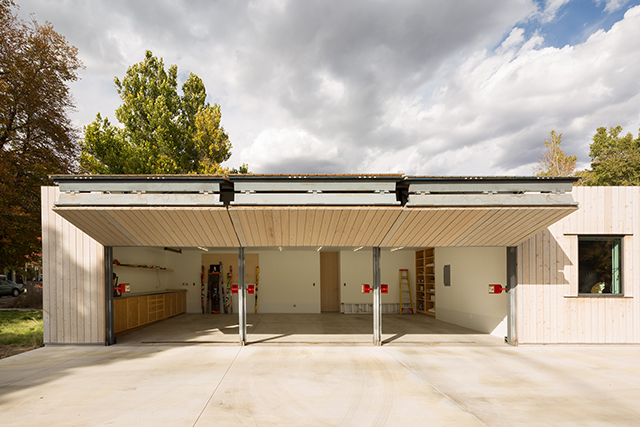 Taut and clean-lined, the aptly named Host House appears as an almost unarticulated, cedar-clad bar with its short end facing the street. Only a few small windows punch through the long sides, emphasizing the building’s linearity and helping it blend into the surroundings. Inside the front door, rooms are stacked front to back along a skylit side corridor opening to the garage, owner’s suite, office, and internal courtyard, culminating in a kitchen/living space whose curtain wall reveals an eastern view of the Wasatch Mountains. A laundry and powder room are tucked between the courtyard and kitchen. Guests are housed in the set-back second story containing two bedrooms, a bath, and lounge.

A hallmark of thoughtful architecture, the floor plan’s logical simplicity belies the three-dimensional dynamics. Sectionally, a large light well over the staircase splits the one- and two-story volumes, funneling light into the center of the house. The upper-level cube is held away from the back wall of the house, creating the feeling that the bedrooms and open-to-below lounge are suspended in space. “The way we detailed the stairs, with open risers, when you’re standing on either side of the stair you see the slip—the skylights, and that the actual cube isn’t connected on those ends,” Kipp says. “It’s a nice moment.” This cutaway also allows warm morning light from the living room’s glass wall to bounce into the upstairs lounge. 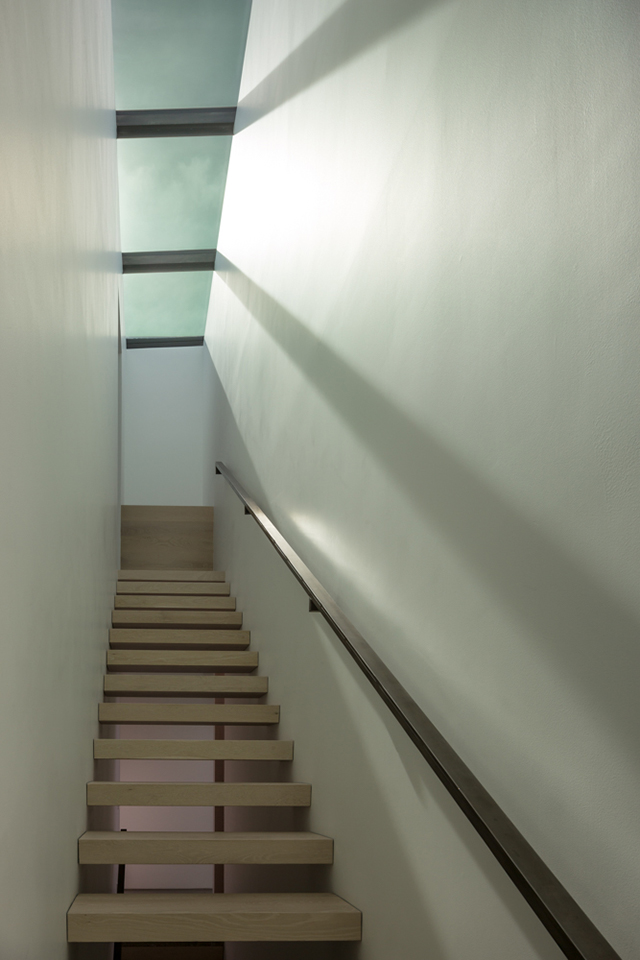 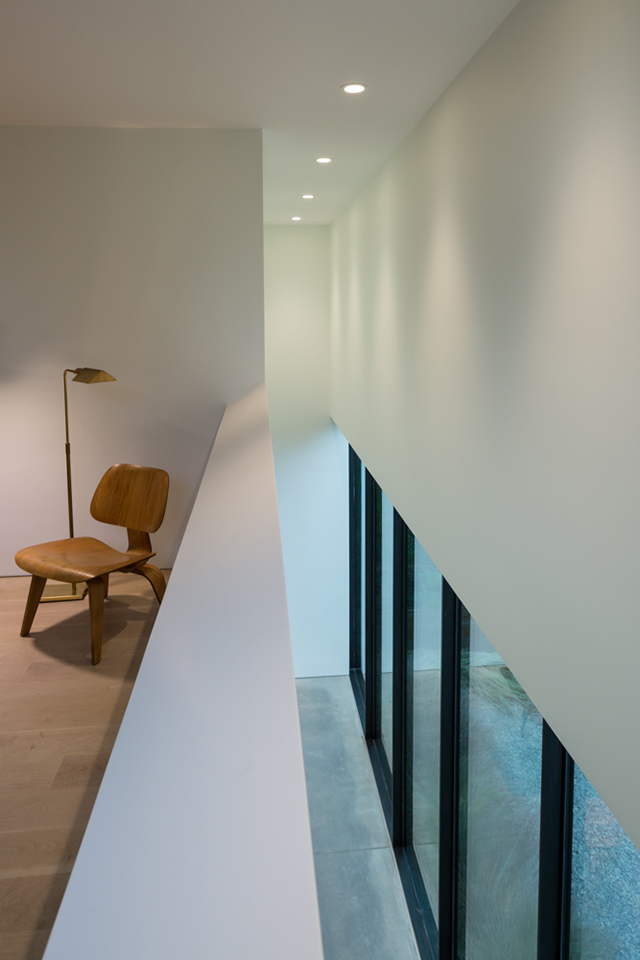 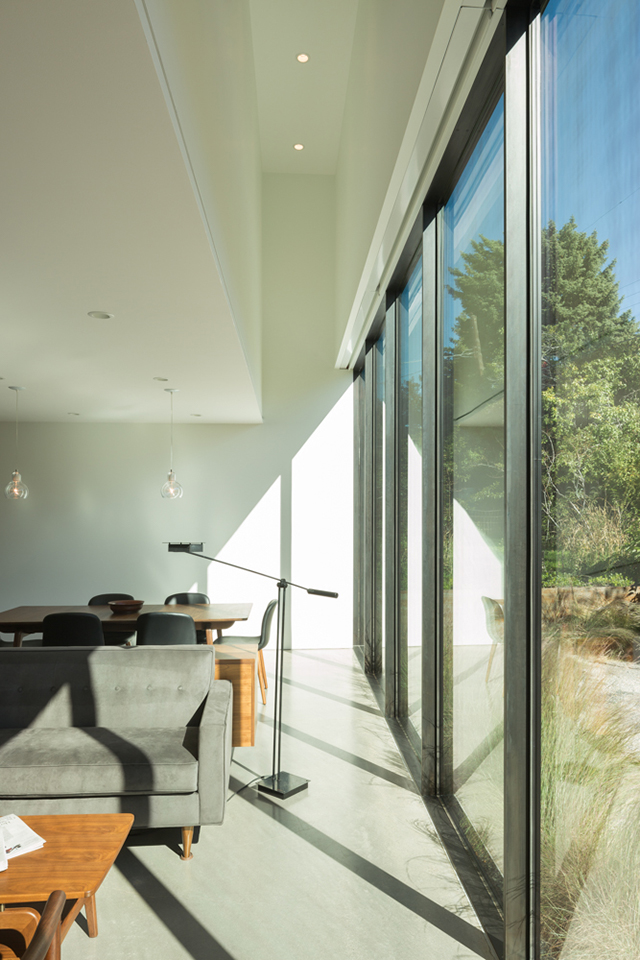 “One of the most surprising things for people is that you can only see two punched windows on the second story and one on the first,” Joe says. “But there are eight skylights throughout the house and strategic curtain wall sections to maximize light in the social spaces. The interior has a daylight that people don’t expect.” The other curtain walls were hung around the internal courtyard. The office, facing the courtyard with corridors on either side, allowed Alan to watch the snowfall and the winterberry tree’s changing colors without neighbors looking in, and to be connected to the people who lived in his home. “It is a social zone, large enough to let multiple people work there,” Joe says.

Materials and colors contribute to the uniform, unfussy interior that Alan requested: radiant-heated concrete floors, white oak cabinetry and casework, glass, and blackened steel. A consummate cook and breadmaker, his appliances in the all-Gaggenau kitchen hide behind wood panels and a large tambour door. “When we were living with Alan in the previous house, he would make elaborate meals in a tiny kitchen tucked into a corner,” Kipp says. “One of the bigger rewards was to have a meal with him in the kitchen after it was built.” 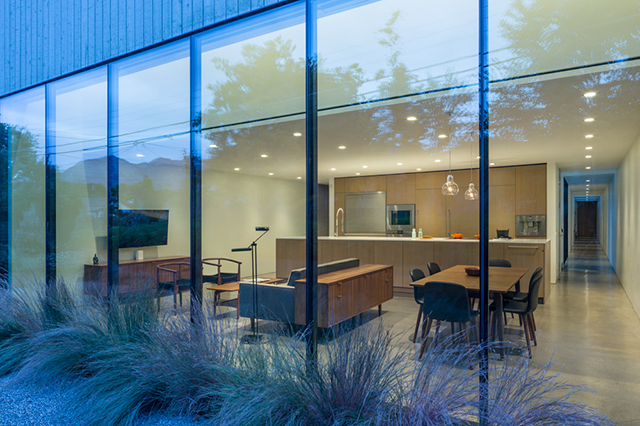 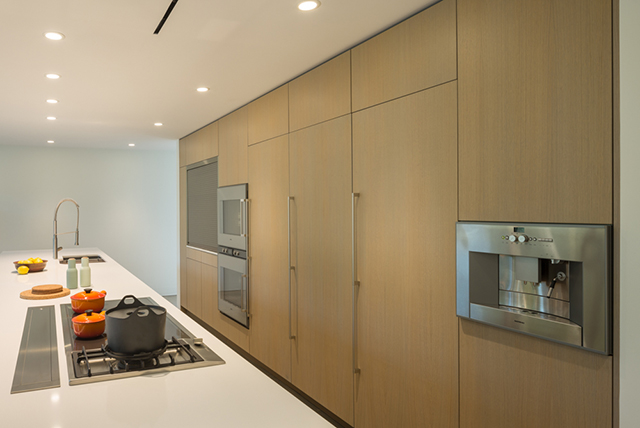 In pursuit of a minimalist box, Joe and Kipp clad every exterior surface in a western red cedar rainscreen, including the three garage doors. The heavy, industrial aviation hangar doors open on a horizontal fold and are engineered to tie back deep into the house. Seamlessly detailed, “the splices of each piece of cedar needed to hit the edges of the garage doors and corners, and also the edges of the windows on that whole south side,” says the builder, Brady Sherman.

It’s a tight box performance-wise, too. Using SIPs construction for the walls, “we had an insulative layer on all six sides of the house, including under the footings,” Brady says. Steel framing supports the garage doors, large skylight, and curtain walls, which were fabricated locally. The ambitious sustainability program also included quadruple-pane windows, solar panels on the TPO-membrane roof, and a 3,500-gallon cistern, which also acts as a heat sink to keep the basement wine room cool. Five geothermal wells supply radiant heating and cooling. “When they modeled solar gain throughout the day, some walls were getting hit by sun, so we ran electric radiant tubing to cool those sections,” Brady says. “Upstairs, the wall on the south is radiant cooled, along with the south wall in the atrium area.”

The design’s massing and details support the premise of an introverted house. The second-floor volume fades into the back of the site, so the house appears to be the same height as its neighbors. Inside, it’s the long corridors, light well, and full eastern view that create a memorable living experience.

Sadly, Alan died in 2019, a few years after he moved in. “I think he was really proud of the design we all got to, and that he could have a legacy,” Kipp says. “He brought kids in for skiing and they turned out to be architects who could translate what he wanted.”

“This project was profound for us,” Joe adds. “It meant a lot to do it for an old friend and mentor. There was a lot of trust, which allowed the project to sing.” 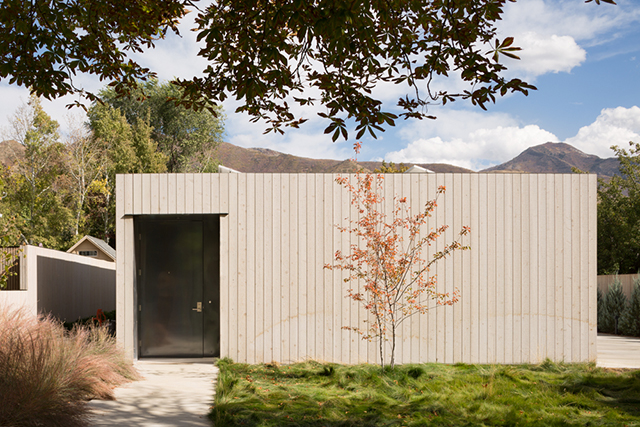 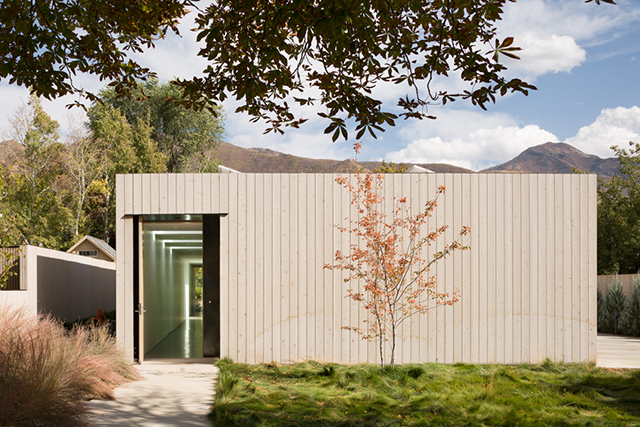 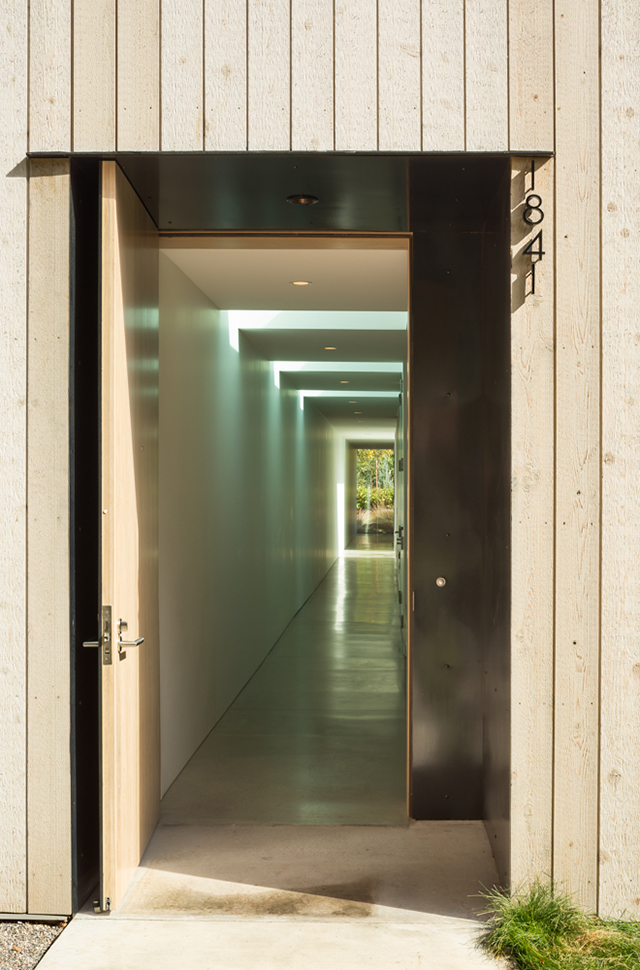 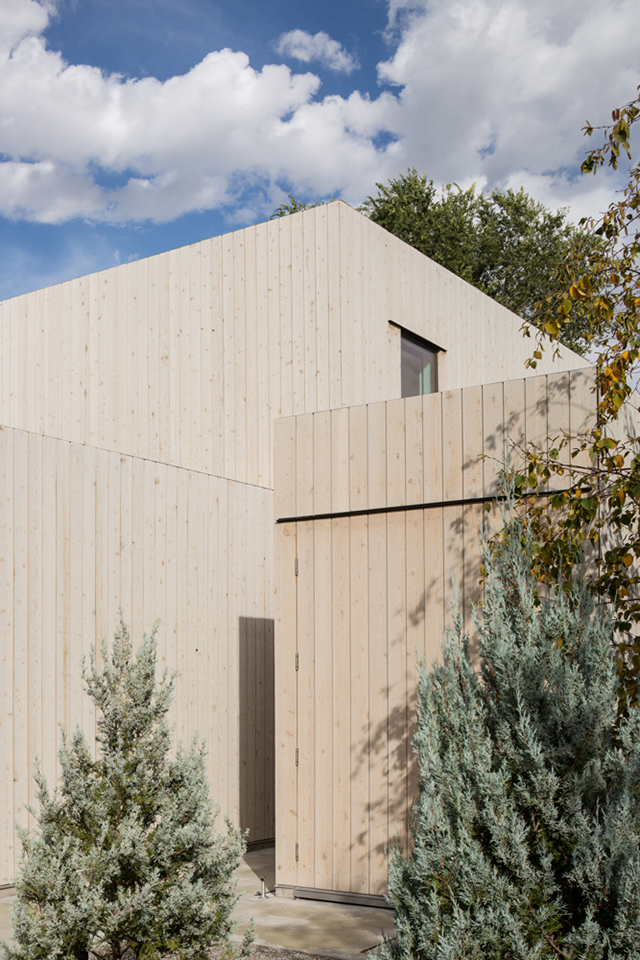 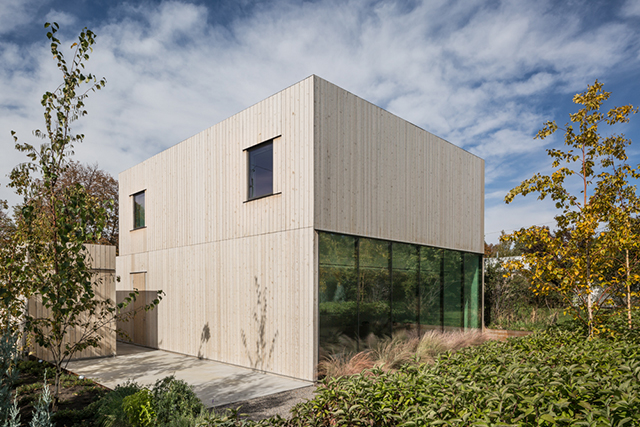 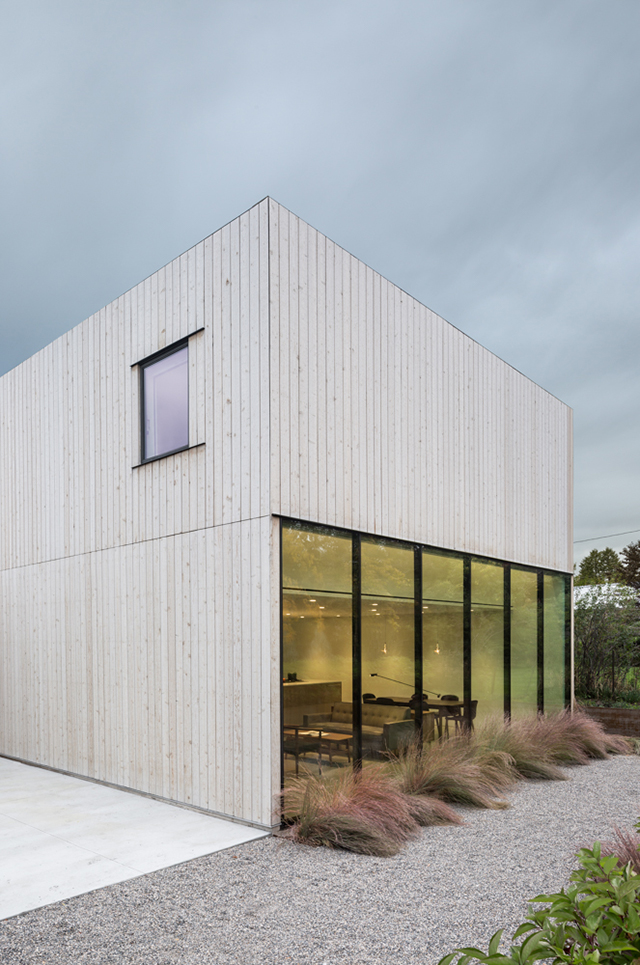 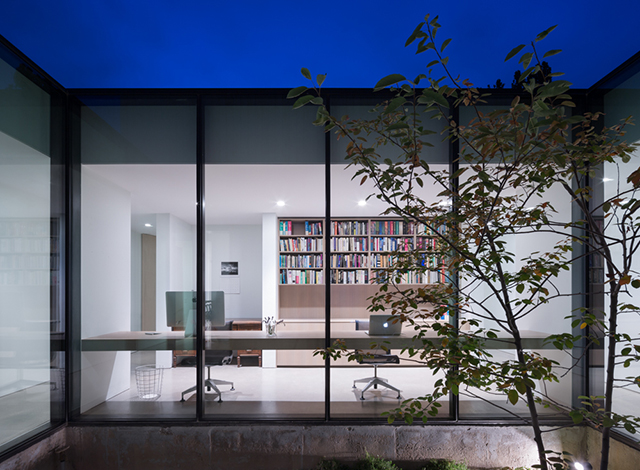 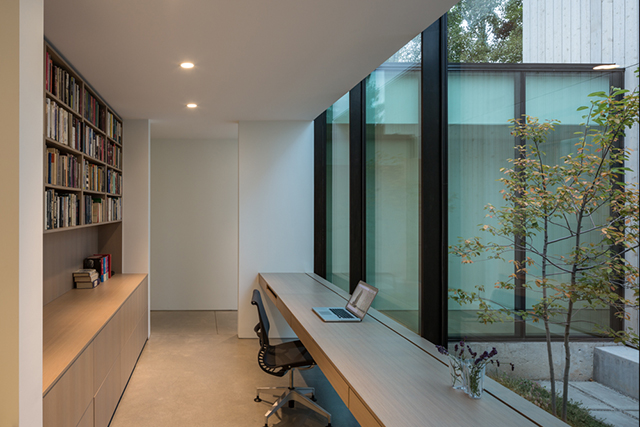 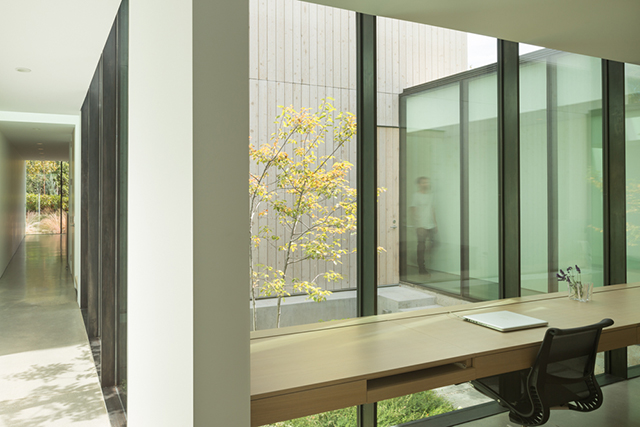 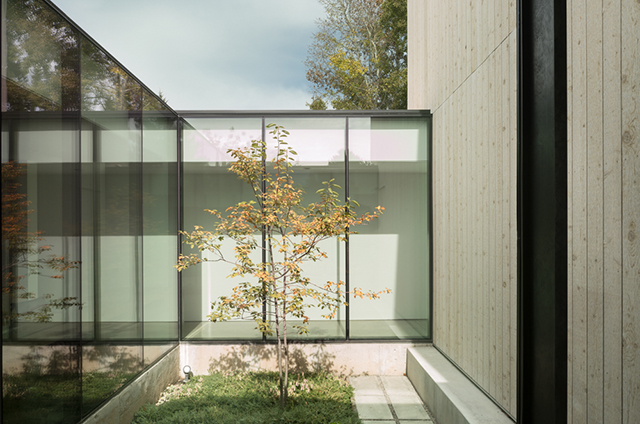 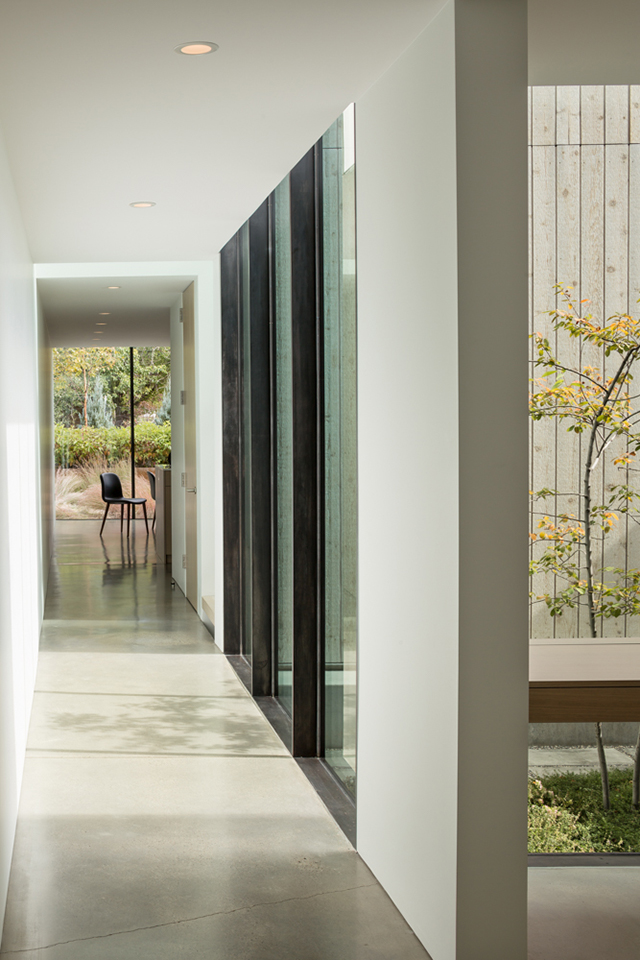 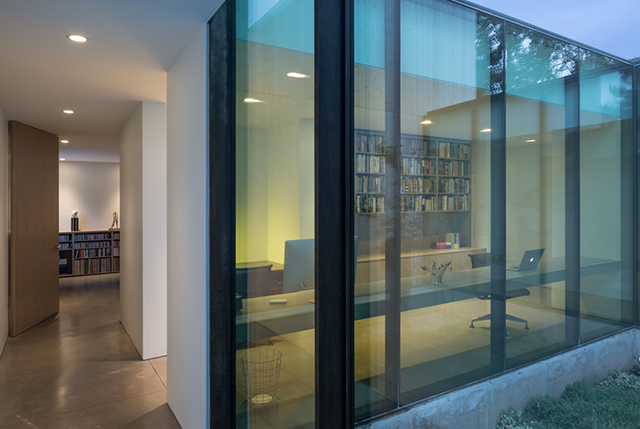 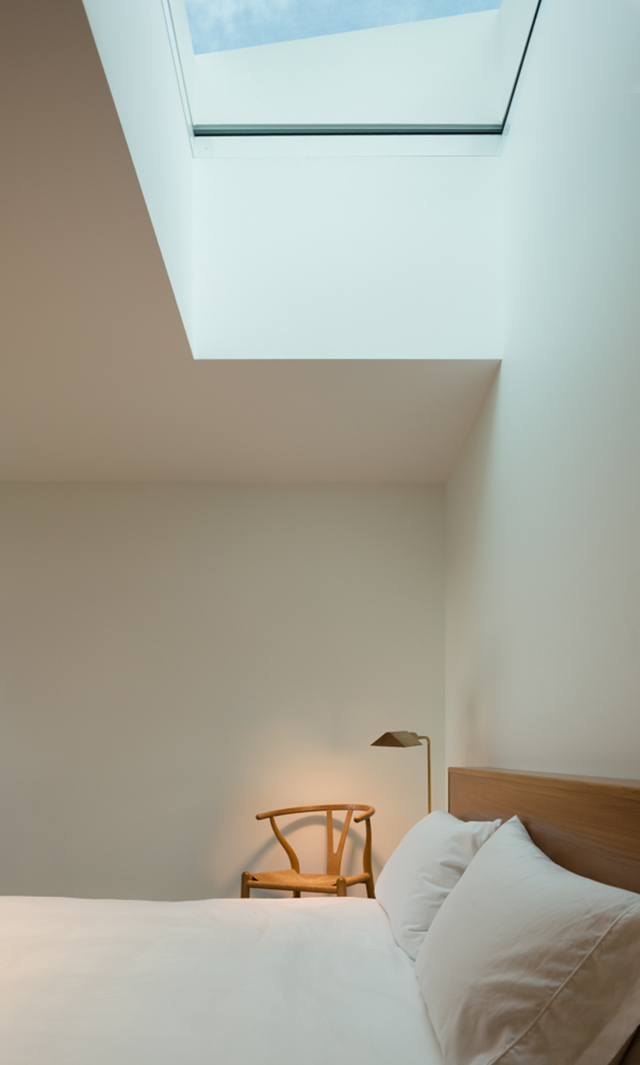 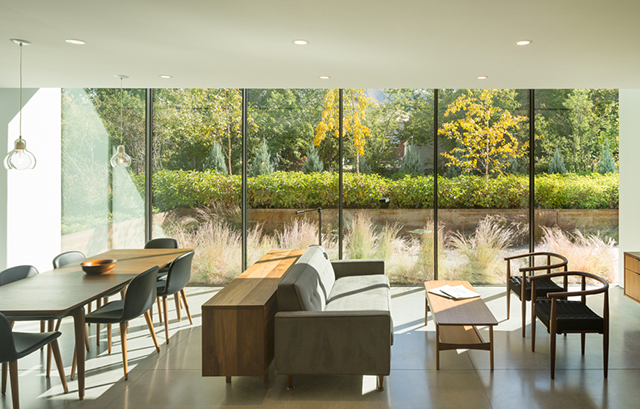 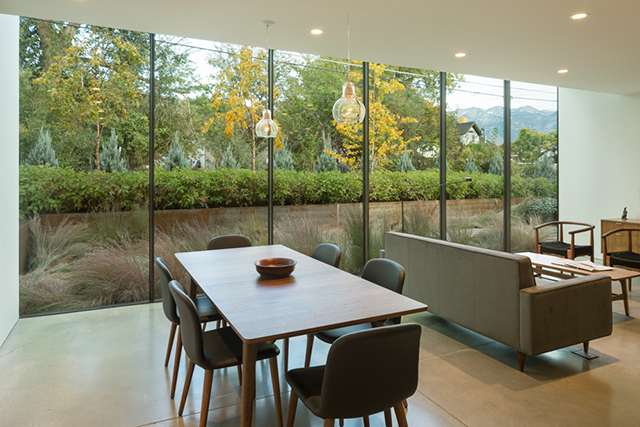 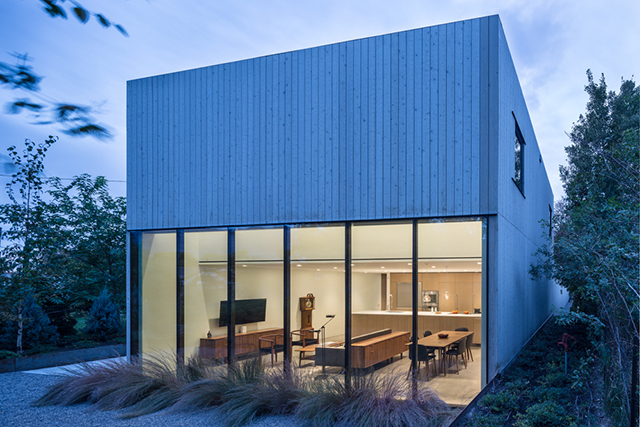 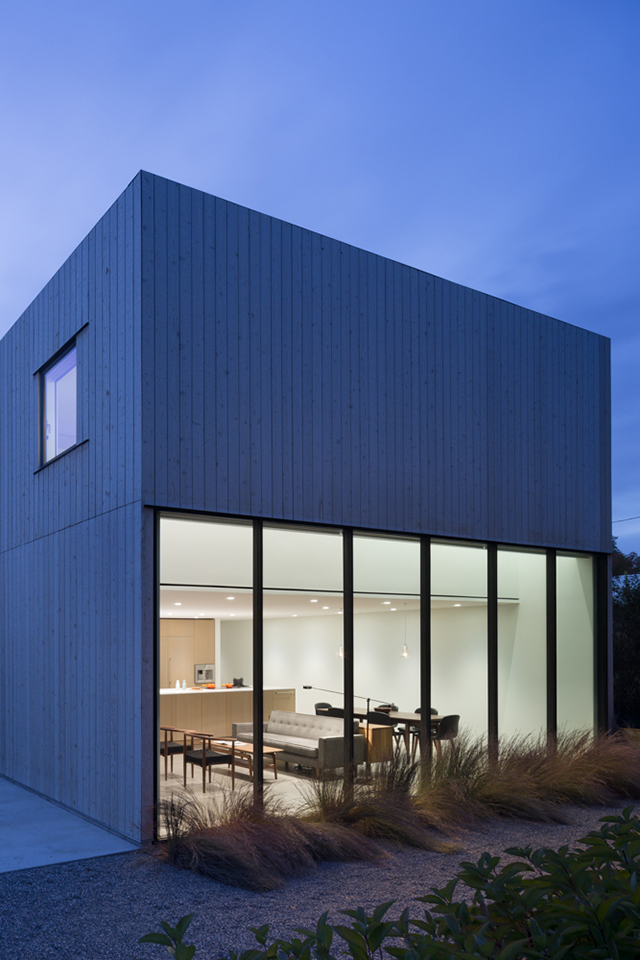 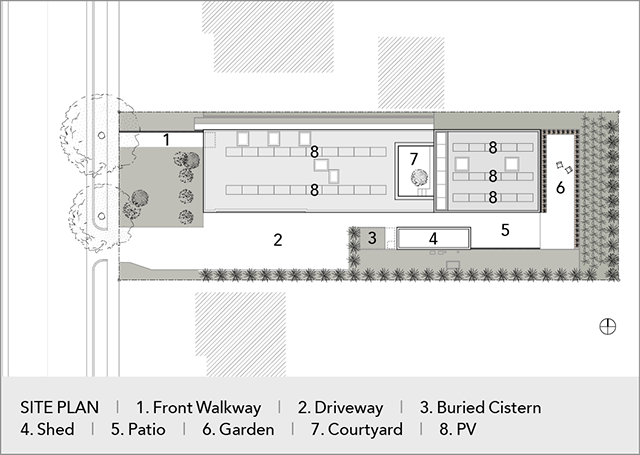 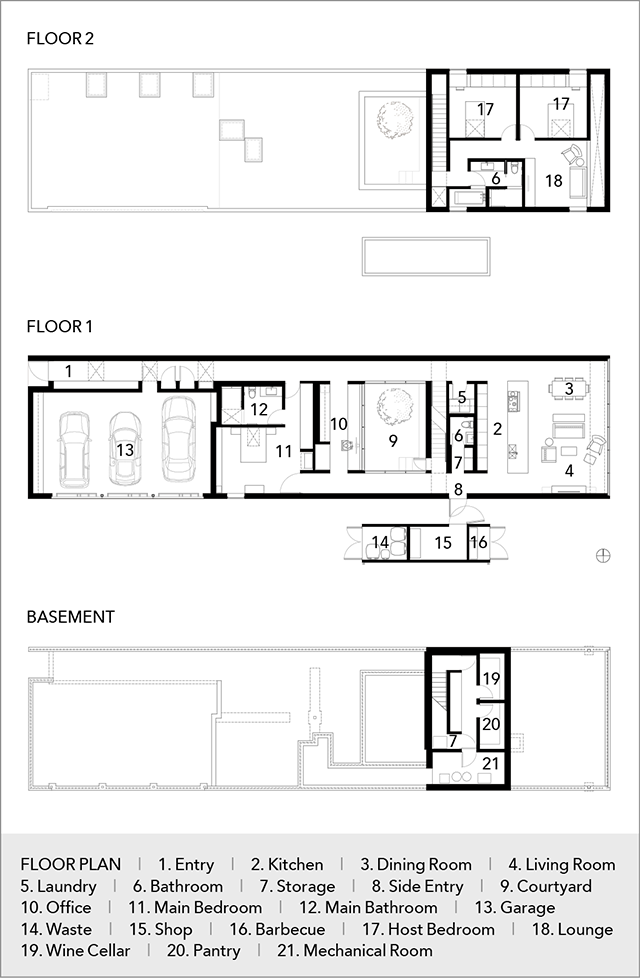 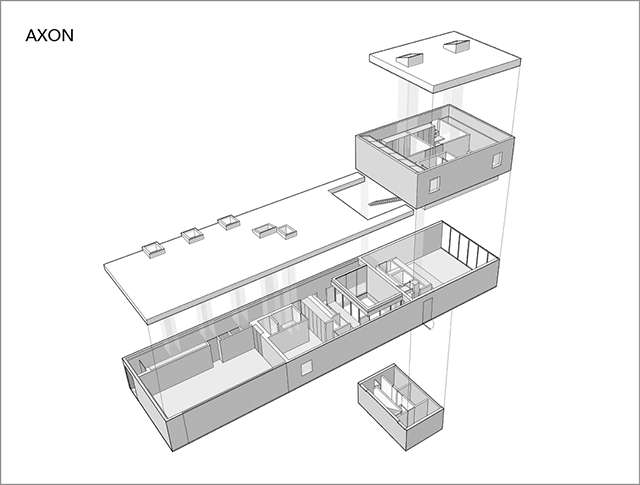 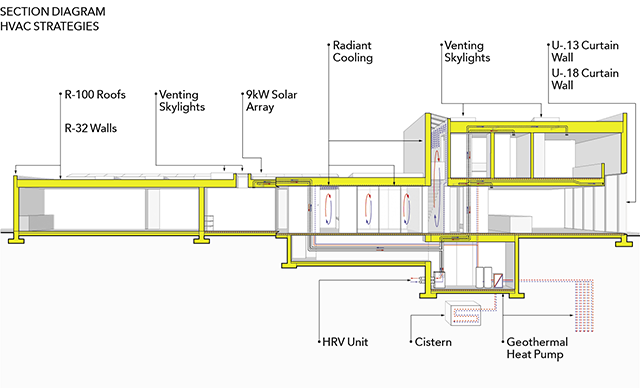