When this 1950s midcentury modern house was designed for its hilly, wooded site in Mountain Brook, Alabama, it was a somewhat rogue architectural contribution to the tony traditional suburb of Birmingham. The original owners were from New York, says architect James Choate, AIA, and brought their sophisticated tastes with them. “The husband was some guy in sales, who traveled around. And, at some point, he announced to his wife that they were moving to Birmingham,” he recounts. “She was none too happy about it. The New York City of the 1950s was probably the high point of civilization compared to what was going on in Birmingham.”

It appears her consolation prize was a brand new, modern house commissioned from a local Birmingham architect with worldly ideas. “The bulk of houses in this suburb are 1920s eclectic,” notes Jim. “And this was plopped in the middle of that at the end of a cul de sac.” It was, by the time, his clients found it, quite derelict and listed for sale as a likely teardown.
They understood immediately that it was a diamond in the rough. The young couple had been yearning for a modern house for years and had had several false starts before this project. Jim met them originally when, after finding what he calls a “difficult piece of property,” they’d driven the two hours to meet with him at his firm, Surber Barber Choate + Hertlein, in Atlanta to discuss the possibilities of building their dream house on the property. But then they disappeared.

“I thought it was water under the bridge,” he recalls. “Then I heard from them again out of the blue. They’d bought the property and hired a local architect to design the house, but it looked like it wasn’t going to be what they wanted. If you knew the property, you would understand how it wasn’t going to work out.”

Ultimately, they gave up on the other architect and sold the problematic property. Then they came upon this oddball box, nearly reclaimed by the overgrown vegetation around it, and they called Jim out to see it. “This is an area like Buckhead in Atlanta, an enclave for gentry. And here was this rundown, perfectly Miesian block of a house. It was like a UFO had landed there,” he says. “I said to them, ‘this is exciting. We can make something of this.’” 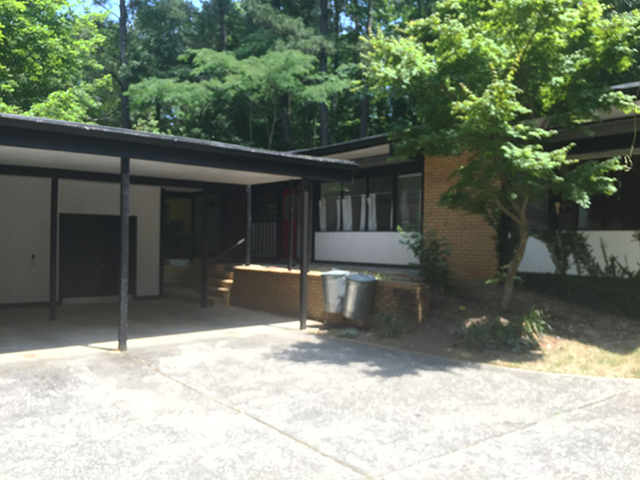 At 1,800 square feet, however, it was too small for the clients’ full program. They had two very young boys and wanted the appurtenances of an upscale life: separate bedrooms for the kids, a couple’s suite, separate workspaces, informal family and dining spaces, formal living and dining areas, a guest room, and a pool and garage. “We knew we needed twice as much square footage, but we knew the clients didn’t want to buy the house for its midcentury aesthetic and then have us ruin that,” says Jim.

Not that the original was perfect by any stretch of the imagination. “The original floor plan showed what a simple box it was, but it was also kind of a flawed thing from the start. It expressed the grid and put the rooms inside the structure, but then poked in some convenient closets that protruded. It was a cool midcentury thing with a couple of goofs in it.”

One of the biggest “goofs” was an ill-positioned carport that blocked the front façade of the house. Removing that was the first big demolition task, and then the flawed box itself could be set to rights. Much of the latter task entailed removing tired and deteriorating 70-year-old building materials and sharpening the interiors to more rigorous architectural and performance standards.

“We scraped off the carport and built a new guest parking spot, retaining a bit of earth to make it work right,” says Jim. “Then we put in a new front door, more or less where the old one was—and painted it red like the original. We put new cypress around the door and extended the black roof beams to make a cantilevered entrance piece with two steel posts on either side.” Replacing the old entrance hidden by the carport was a fresh new entrance properly “signaled” as an important arrival point.

“All the windows are in the original locations, and the main bedroom is now the guest room with a new guest bathroom. We harvested the original secondary bedrooms for a larger kitchen, home office, and storage. Basically, we rescrambled the guts of the original.”

Perhaps unscrambling is a more accurate description, because Jim and his team made sure to clear axial views to the house’s best feature: two yellow brick end walls on either side of the great room. The brick walls appear elsewhere in the original house, but these two are the tour de force.

“If those bricks had been red, it would have changed everything about the house,” says Jim. “They are a really nice yellow brick, which we saved, cleaned up, and used as our color palette.” 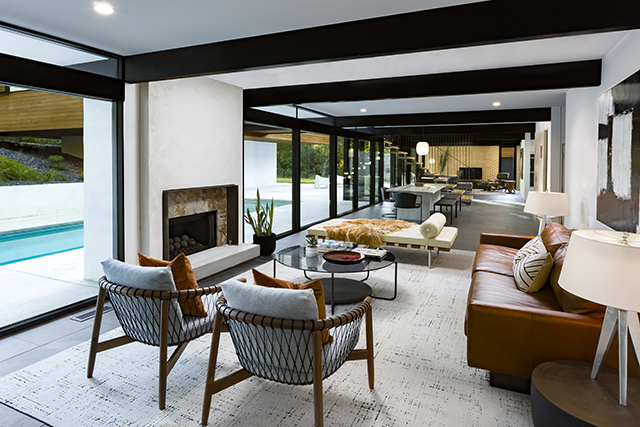 Sorting the old box was, as Jim calls it, “reconstructive surgery.” But a more delicate operation was adding on the new box. That’s where it was easy to go awry. “We modeled three or four different ways to do it,” he recalls. “The first version was the one I liked the best, but I thought it was out there.”

It was the one the clients liked the best. “We made the decision to build the new addition away from the old and reach over and insert ourselves in as minimal a way as possible through the roof. So we restored and improved that original midcentury thing and built the new thing with what they needed, using the topography to do so.” The new addition is built toward the slope of the site, with most of its program on the second level. There’s a self-contained studio on the ground level with no interior access.

“The idea was a zero-gravity bridge that would reach across from the new addition to the old house and plop down in the right place,” he continues. The bridge spans the new courtyard and pool area, connecting the main level of the addition through a sort of box on the roof of the original building and down into the great room. “It’s a big horizontal move to a vertical move. And the hall to the bedrooms align with the bridge, so it’s also great Tonka truck run.” 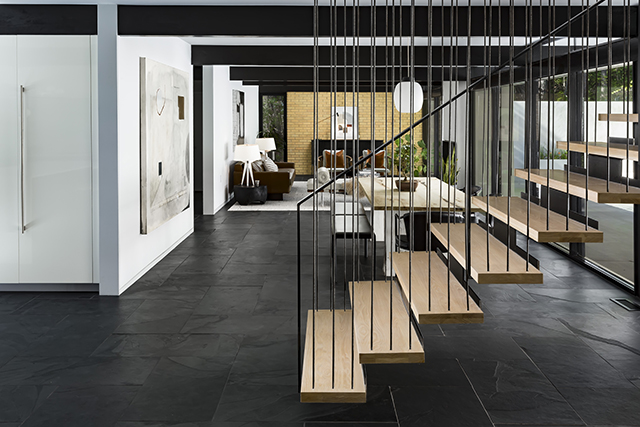 The vertical move—the main stair—is suspended from cables. It has some extra structure to keep it from “swinging” says Jim, and to ensure the open white oak treads meet code—but it’s the cables doing the support work, he assures. “The stair gives the room a kind of Rat Pack feel, but it barely has a presence through the house—I wanted you to see gold brick wall to gold brick wall.” And that’s not all you see. A new fireplace in the living area and a fountain over the new pool provide fresh focal points of fire and water through the restored window wall.

Carefully recomposed with the “bumps removed,” the house finally really belongs where it is. “The first great gift of midcentury architecture were views from inside to outside,” says Jim. Here, the views from outside to inside are just as compelling. 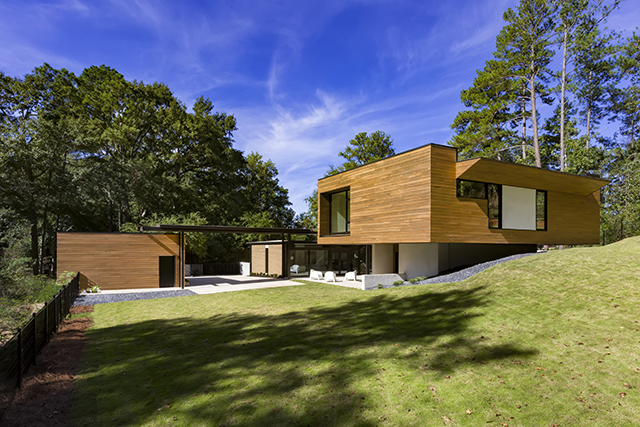 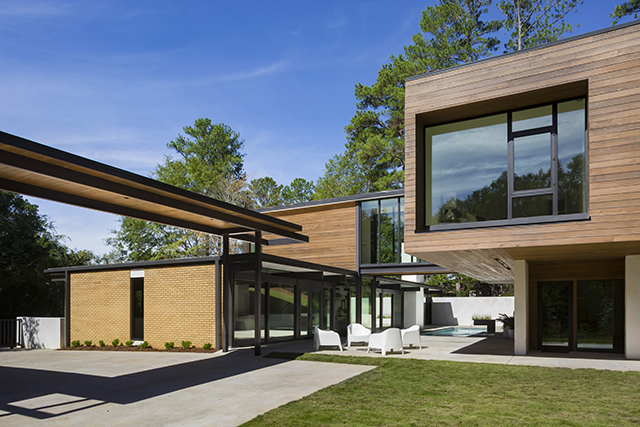 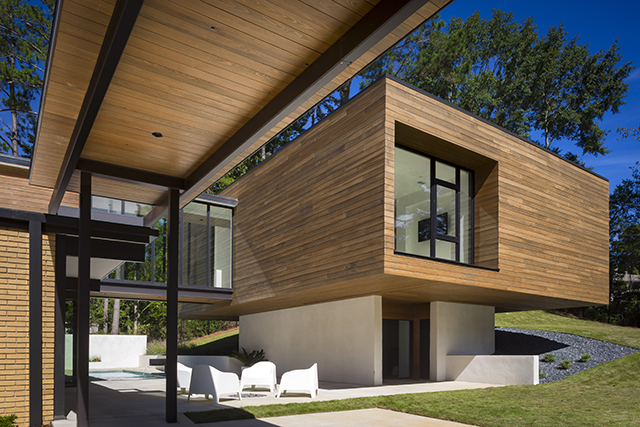 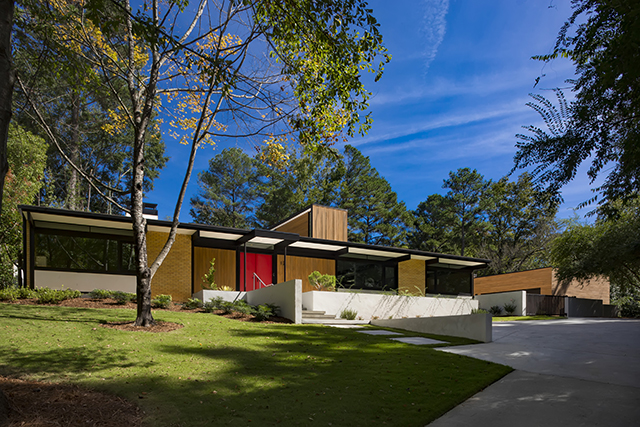 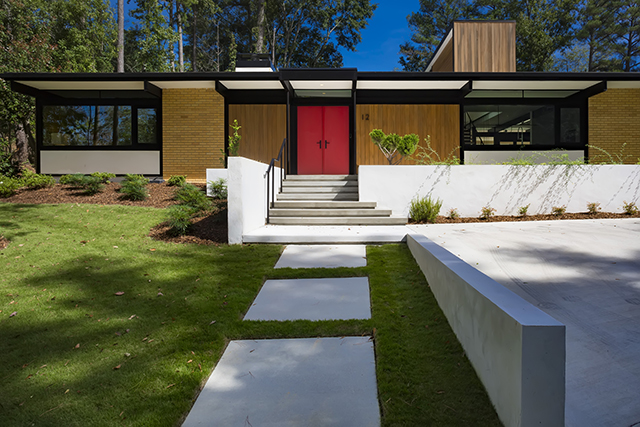 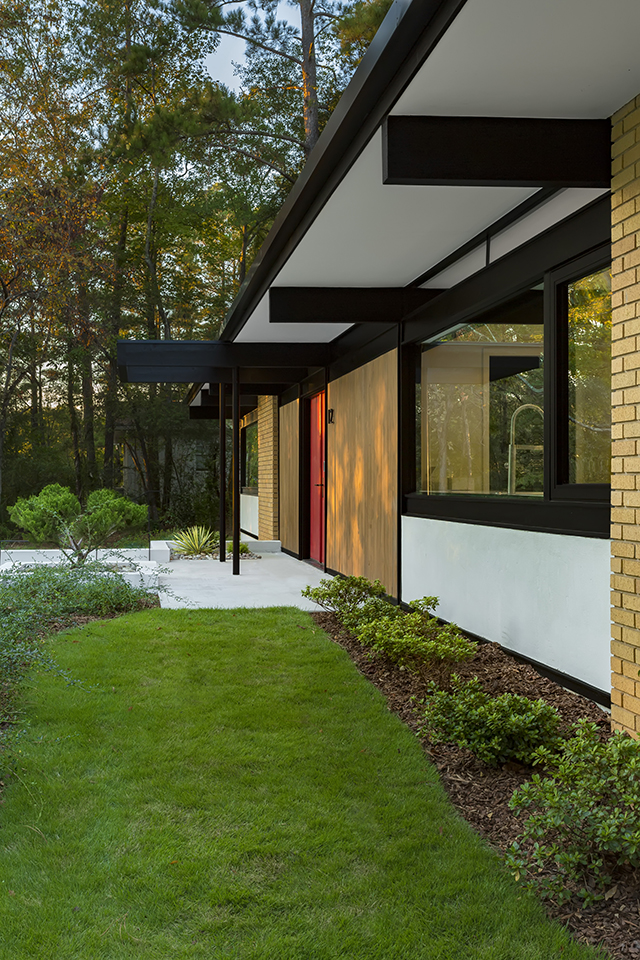 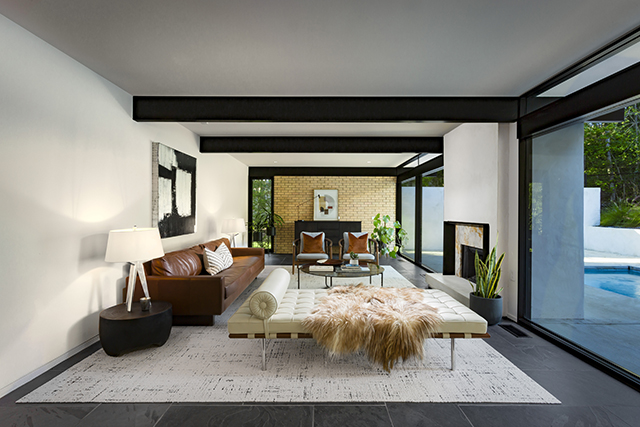 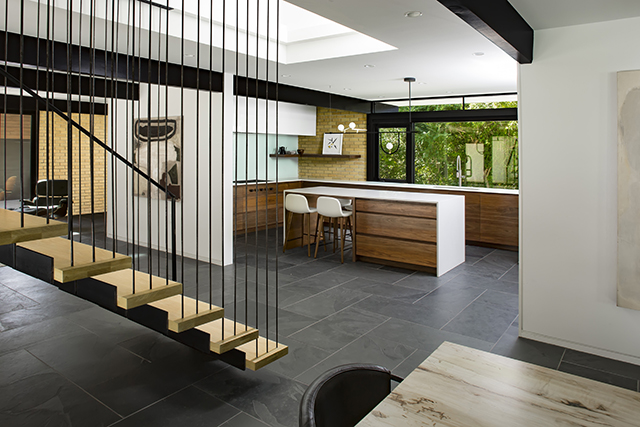 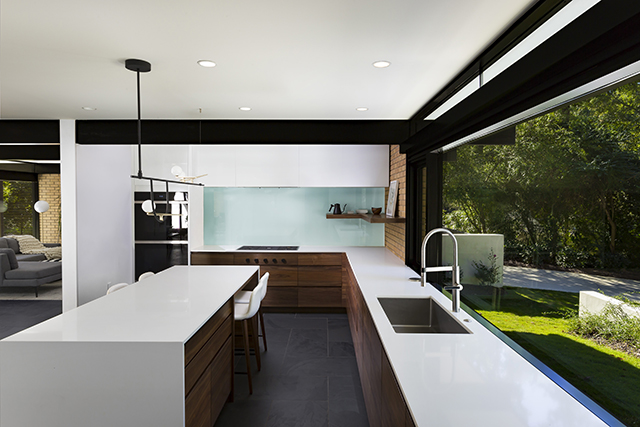 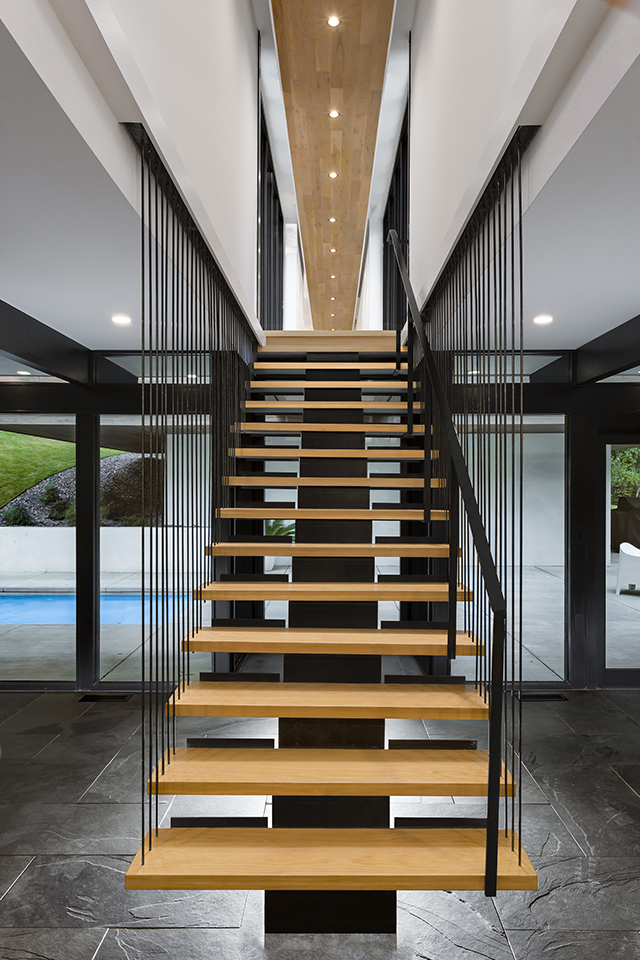 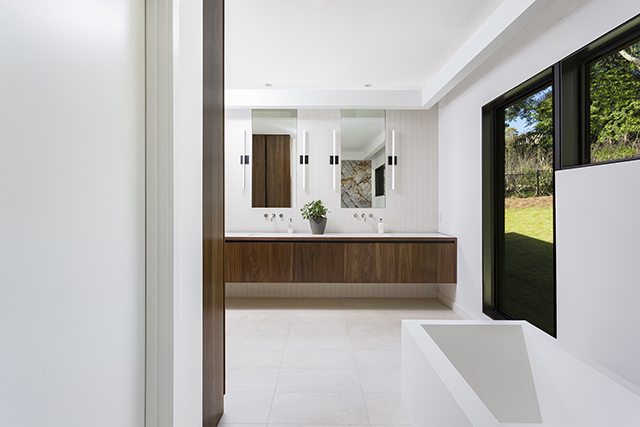 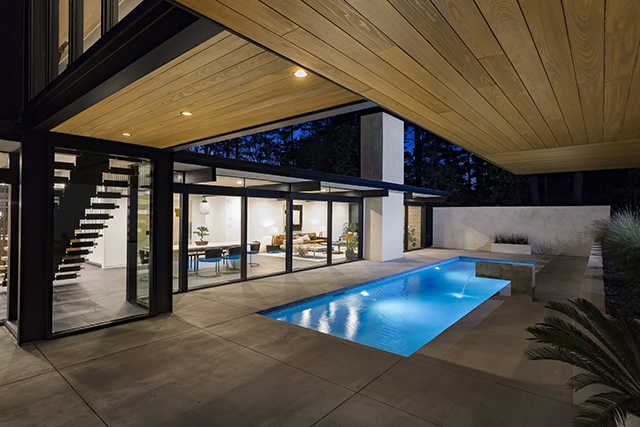 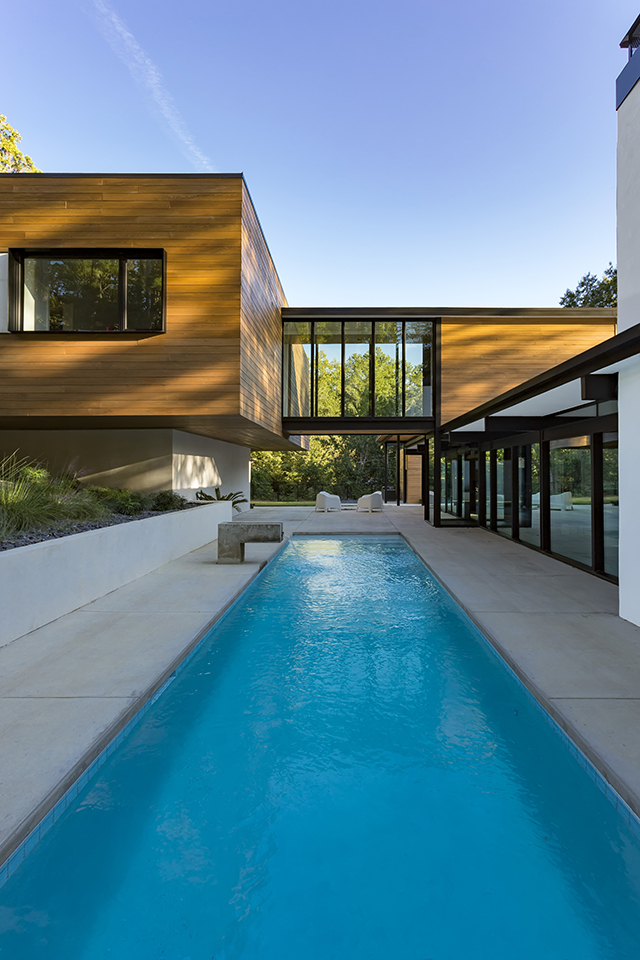 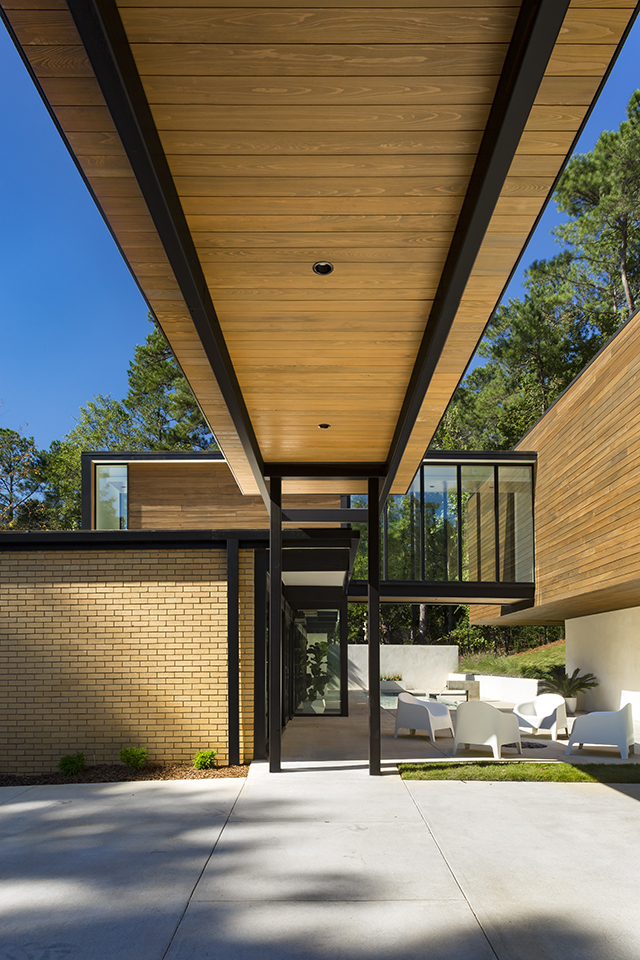 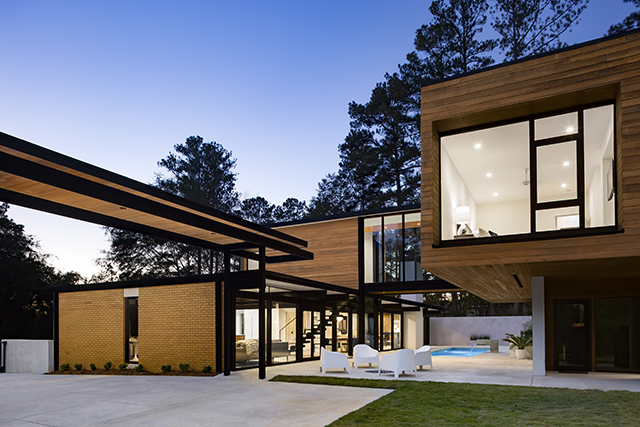 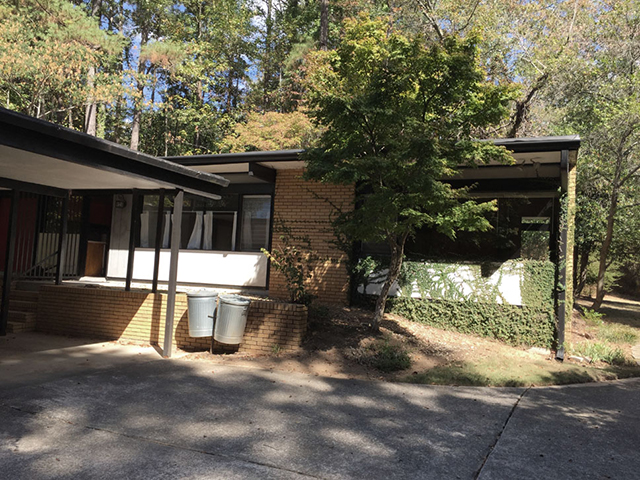 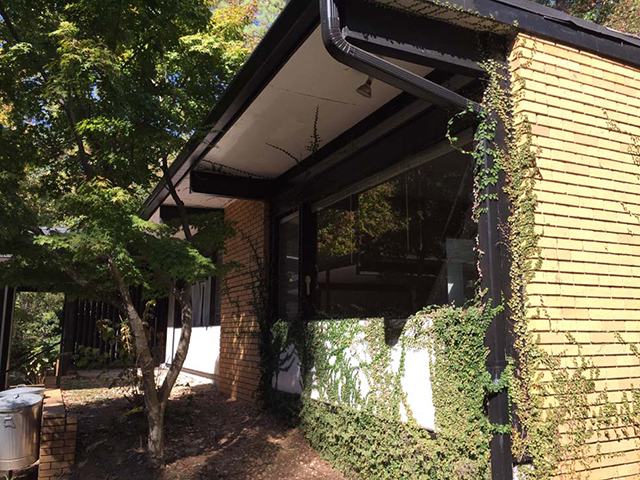 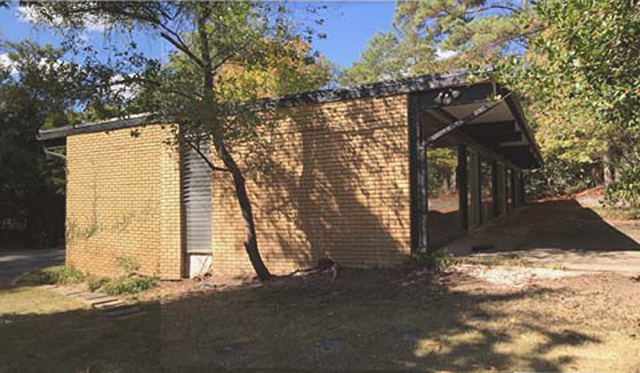 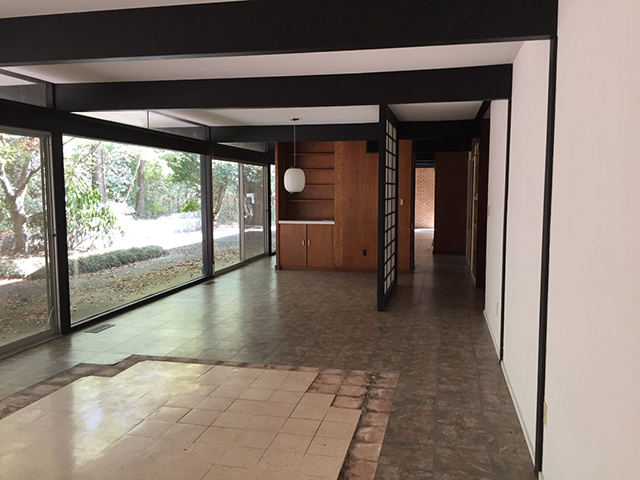 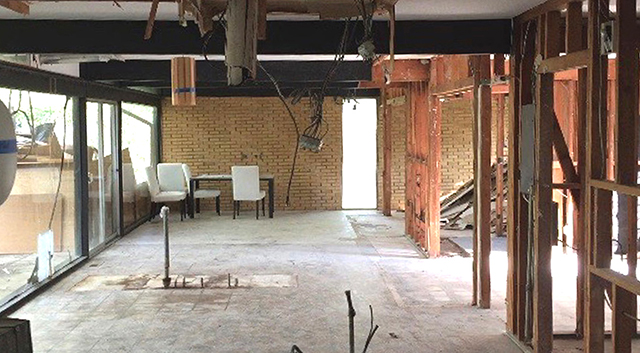 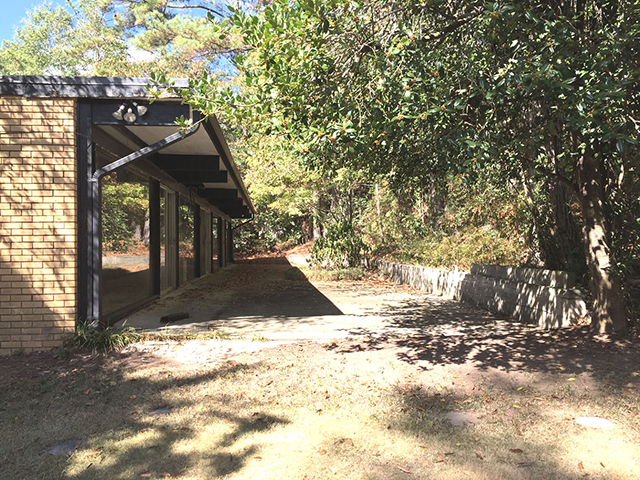 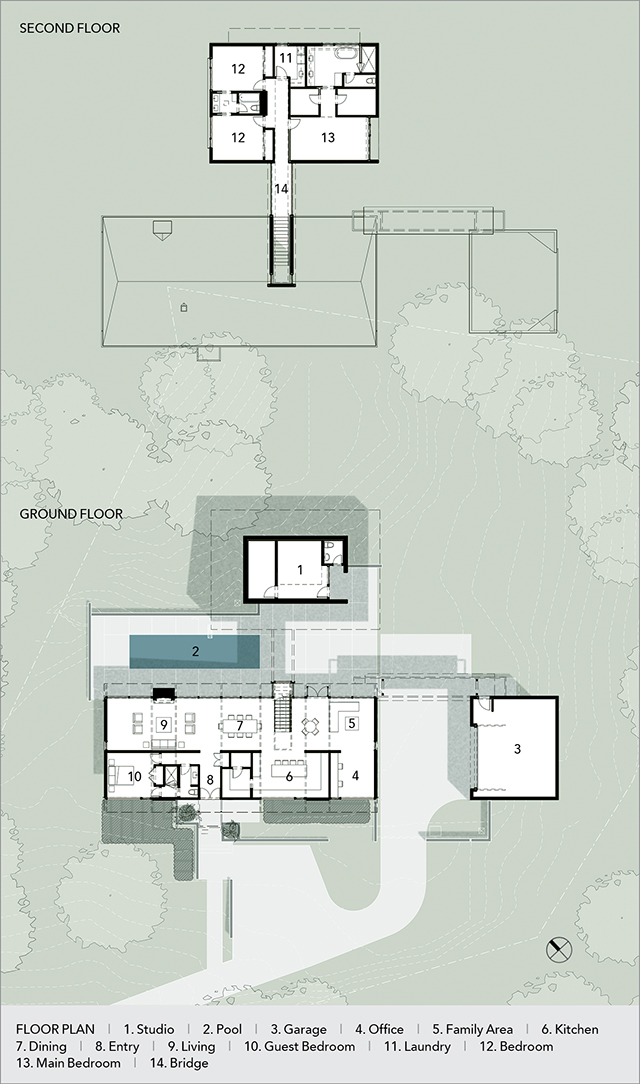