“Practical” is the word that pops up, like weeds after a rainstorm, when architect Greg Howe, AIA, describes his clients’ approach to their house in a northern Chicago suburb. The married couple are avid gardeners, and after a four-year search they had found the perfect sun-filled plot on which to indulge their horticultural fantasies, which included growing plants from seed in their basement. Situated in a well-established neighborhood with a mix of house periods and styles, the backyard faced south and contained only one tree—a veritable blank slate.

Well, not quite blank. A ramshackle house and garage that had been used by college students was torn down and its materials recycled. During their extended search and the site prep, though, the men had thought through every detail of how they’d live in their new space. “They had no kids and there was not a lot to the program, but it was very specific,” says Greg, who designed the 2,165-square-foot house. The couple had lived in a 1920s bungalow and wanted something decidedly different. At the top of the priority list was an indoor-outdoor relationship that would facilitate a gardening lifestyle. One of the men, a band director, even diagrammed how he wanted to get the seedlings from the basement to the back of the property, Greg says.

If the couple were clear about their design goals, they also had a firm grip on the budget. What followed was in some ways an ideal, if challenging, commission, with clients who coolly considered every material decision in terms of whether it was necessary and core to the house’s character.

That’s not to say their ideas didn’t evolve. The flat lot has close neighbors and abuts two alleys, one at the back and another along the west side. Early house diagrams explored an irregular footprint that allowed the land to weave into the house, but it became more streamlined as the scheme progressed. The clients’ request for structural simplicity led to a clear boundary—literally—between house and landscape, with the kitchen, dining, and living areas positioned along the back of the house, and a 28-foot wall of glass connecting this big open space to the garden. Upstairs is a master suite and two modest bedrooms, while a 10-by-12-foot study tucked behind the powder room on the first floor could be considered a fourth bedroom. “They got more favorable financing on the construction loan by expanding the program to four bedrooms,” Greg says. 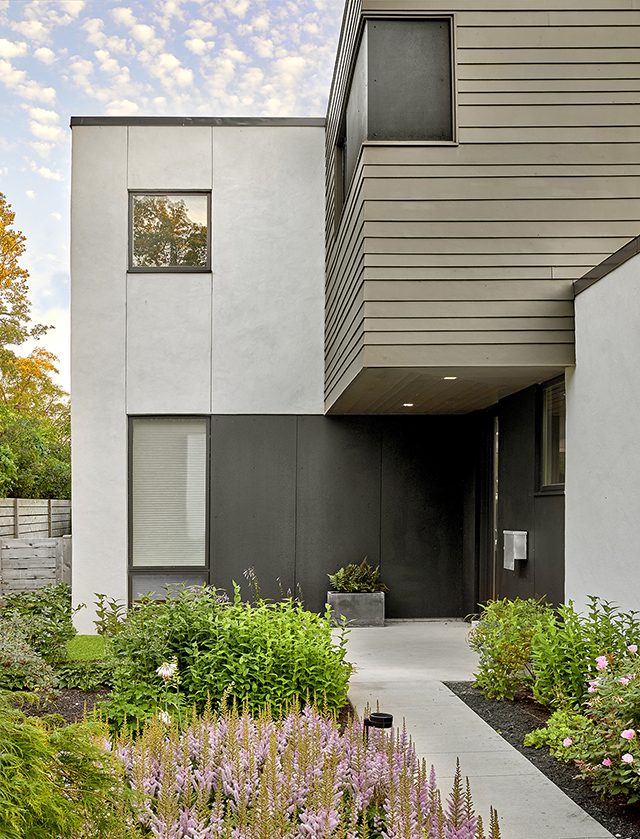 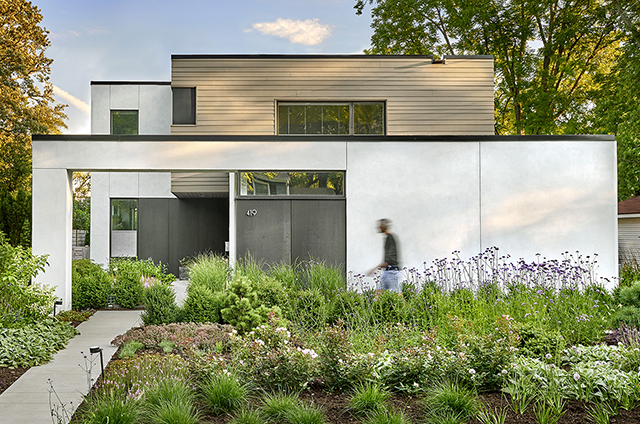 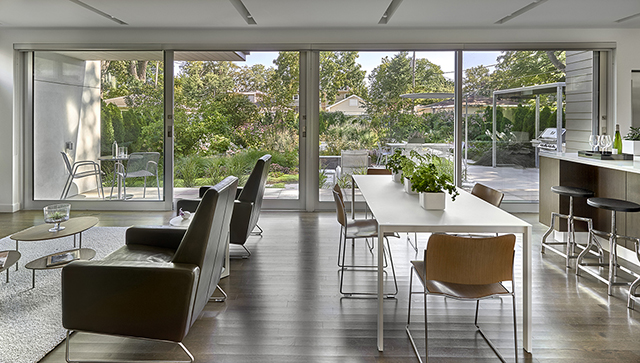 The project was about editing rather than adding, and more about enhancing their lives than creating an object, he says. Yet there were two splurges that elevated the house beyond the familiar ordinary. One was the use of the curtain wall to open the back to the garden. Doing so led to the other muscular move. “By opening the back of the house to the yard as much as we did, it forced us to move the garage, this big solid object, to the front of the house, which isn’t that big to begin with,” Greg explains. “The garage really became this challenge of how to integrate it into the project and make it neighborly at the same time. We tried to mask this major volume as much as we could from the street.” The solution was to extend the upper part of the north garage wall across the front of the house to the east to create a gateway that visitors walk beneath to reach the front door.

Even though it protrudes, the garage hides in plain sight because it empties into the side alley and reads as an abstract, intersecting volume. Behind the garage, the house forms a slight L shape, with part of the second story bumped out to create a covered porch over the front door. “By extending that garage wall, we were able to camouflage the garage’s simple box shape and also extend the scale of the house without increasing the square footage,” Greg says. “It created extra volume with this outdoor space behind it.” The house’s cladding materials—white stucco, dark Richlite, and beige cement board lap siding—articulate those planes and volumes.

With the budgetary padding blown on the curtain wall and entry wall, any detailing on the rear façade had to serve double duty. This was deftly supplied by industrial metal grating on the master bedroom balcony. “We wanted the balcony to have a certain presence, rather than try to make the railing go away,” Greg says. “The railing gives the back a level of detail that is otherwise lacking.” It looks transparent when viewed from the bed inside, but opaque when seen on an angle from neighboring homes. 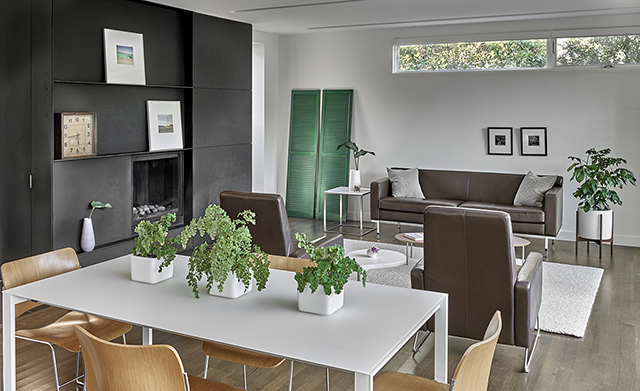 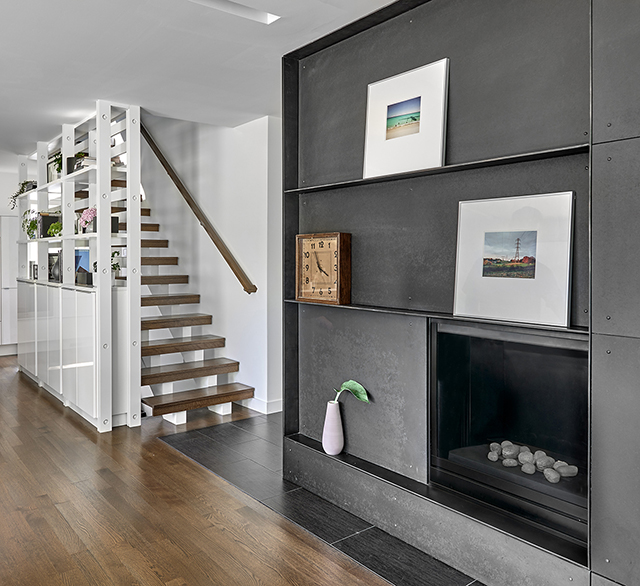 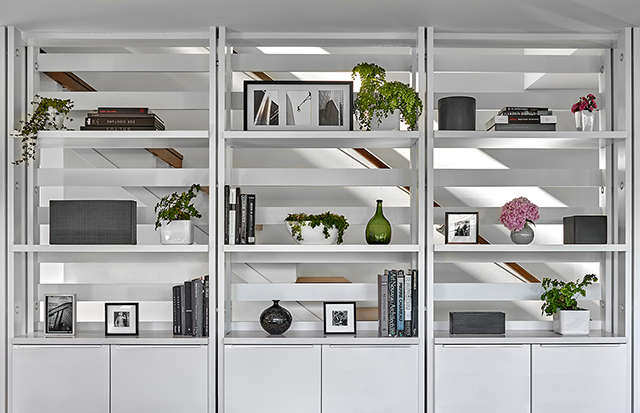 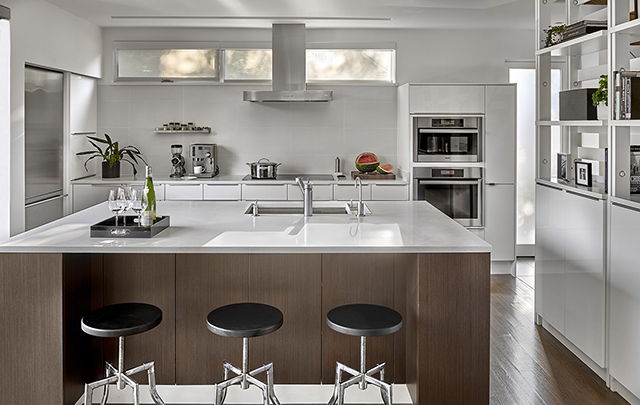 There is an energy that comes from this house’s relative modesty. And while the mandate to value engineer almost every square inch can sometimes shortchange creativity, it also feeds it. The key is follow-through. “A lot of times, projects start simple and become indulgent,” Greg says. “That’s frustrating, because you end up with an unbalanced project where one space is better than another. These clients were very clear on their intent, and as a result there’s a harmony you feel when you walk into the house; it’s strong and consistent.”

Light plays a big role in how buildings function for the people inside, and the goal here was to bring in sunlight without sacrificing privacy. The clients’ wish to forgo window treatments on the first floor led to extruding the roof and walls past the rear façade, mitigating the summer sun and blocking views of neighbors. On the west and east elevations, windows are limited to clerestories on the first floor to edit out the alley and other houses, and second-floor windows sit higher than usual for the same reason.

With its white cabinetry, oak flooring, and dark accents, the kitchen and living area is understated in deference to the owners’ true focus—the adjacent garden. Ikea cabinets counterpoint an island made out of Ikea boxes and Semihandmade Wenge panels. The white Caesarstone countertops and textured porcelain backsplash are similarly hardy and unfussy.

“We tried to work toward solutions that find beauty but also function in detailing,” Greg says. Another example is the sideboard. Composed of three Ikea upper cabinets set on the floor, with shelving above, it is framed out in 2-by-4s and 1-by-4s that serve as a railing for the open-tread stairway behind it.

“It was basic construction but it ended up looking high-end,” says Eric Kraus, co-owner of Eighty-Eight Design + Construction. “Greg was really good at value engineering line by line with simple interior finishes. I made about 106 trips to Ikea to get little parts to make the cabinetry work. They were not making that line anymore, so Ikea was also sending parts from New York City.” The bathroom vanities are Ikea cabinet boxes with Semihandmade fronts, and contrasting light and dark tiles echo the colors in the living space.

Something the design team didn’t fully grasp until months after completion was how the house’s quietly informal demeanor acts as both backdrop and foreground to its surroundings. “We were pushing the clients to be a little more adventuresome with materials and they pushed back with a restrained palette,” Greg says. “I never understood why until I saw the property fully planted. There’s so much visual vibrancy to the plants that the house materials only make sense when you put them in that context.”

In with the seeds, out with the wheelbarrow: even the wintering-over plants found their path from basement to backyard. Just steps from the rear side door, the open basement stairs are wrapped in black rubber that can take a beating and almost disappears in contrast to the airy, upper-level staircase. “This was really a two-part relationship with the property, and we don’t get that chance on every commission,” Greg says. In texture, line, and color, each part applauds the other. 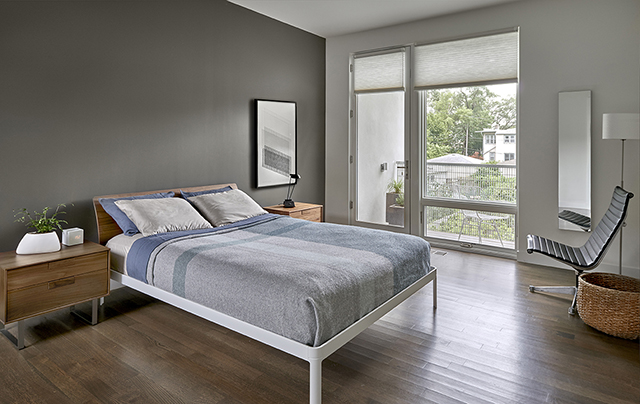 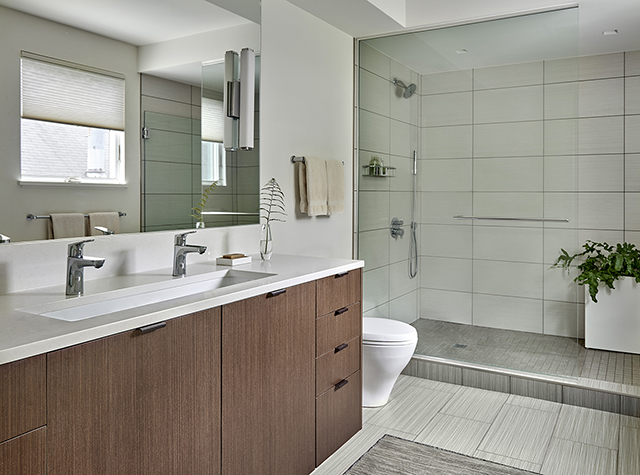 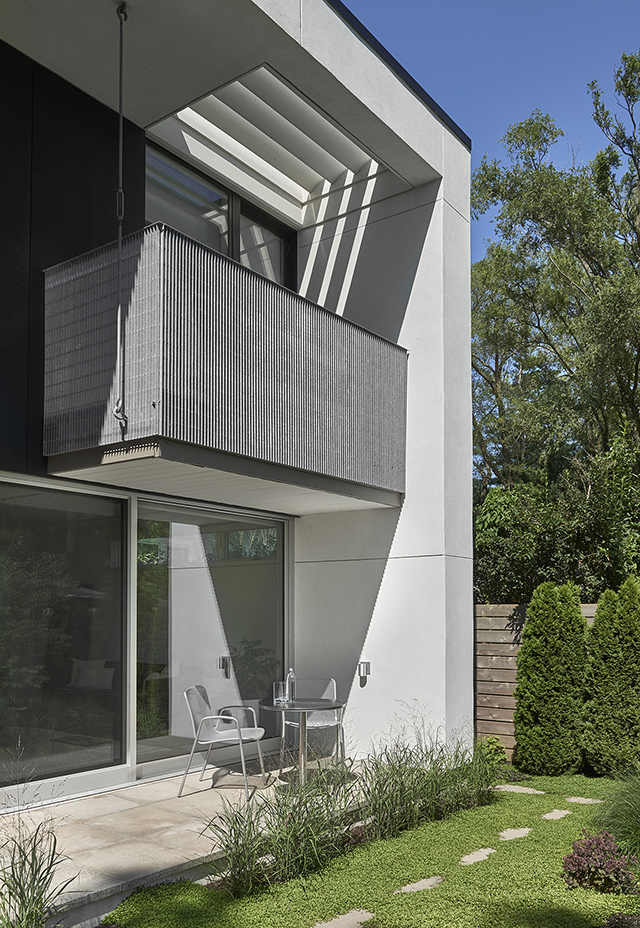 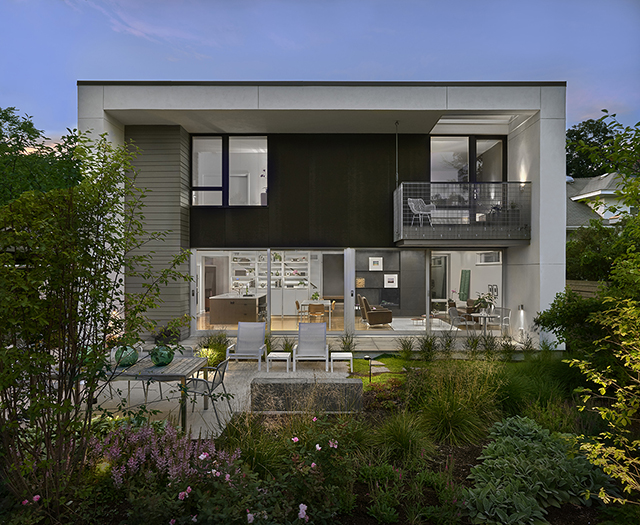 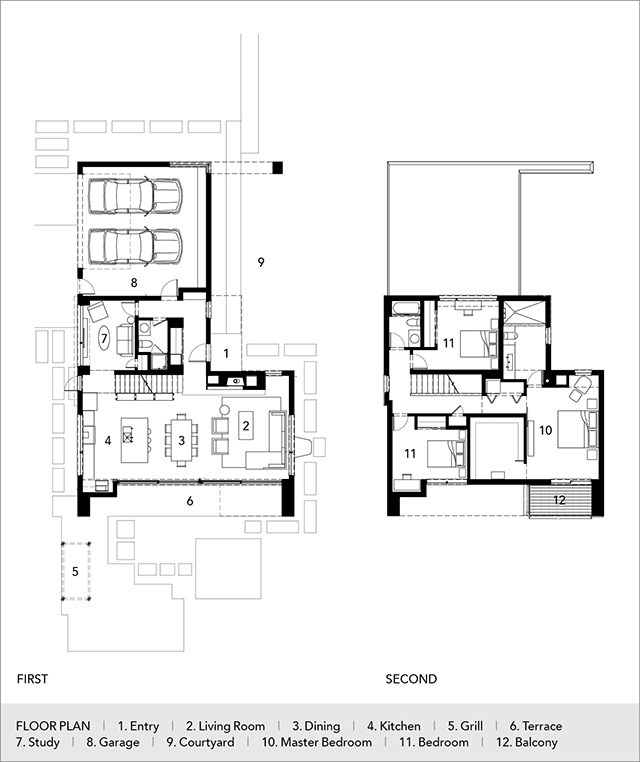