It has always been the job of architects to provide alternatives to the one-plan-fits-all-lots approach to residential design. But in some neighborhoods, these efforts go against the grain of current trends. Case in point is Casa Linder, a very different-looking building that burrows deeply into Dallas’ past. In a neighborhood of oversized developer homes that max out height restrictions, Casa Linder reintroduces its community to the power of place.

This old East Dallas neighborhood is a classic, with mature trees, parks, and recreational activities. It is also close to downtown, which makes its gradual transformation from older bungalows to multistory mega-homes a familiar story. When the clients purchased the 55-foot-wide by 220-foot-long lot, however, they couldn’t bring themselves to use a builder house plan. The married couple—a creative director at a large advertising firm and a buyer for Neiman Marcus—have two teenage boys and asked Buchanan Architecture for a highly social house with room for entertaining.

“They had gone to a builder before they came to us,” says Russell Buchanan, FAIA. “They used to live across the street from us; we’ve been friends for 20 years. So we put a program together and it was one of the rare times when the design and form came together almost instantly. Within a couple of weeks we were on track and working on the project.”

The lot itself was a conundrum—long, narrow, and running north-south, exactly against the best solar orientation. The newer houses around them sat back about 30 feet from the street, leaving a deep empty lot with a garage off the alley at the back of the property. “In an aerial view you’ll see huge houses with wimpy little breezeways that go 150 feet back to the garage,” Russell says. “I think it’s because the developers already had plans drawn, so they put the house at the front and the garage at the back and figured out how to connect the two.”

Russell took a different approach. His research showed that before Dallas was settled in 1845, it was part of the Blackland Prairies, and the early dwellings were one-story structures made of readily available wood and corrugated metal, which was invented in 1820. Inspired by the wife’s fondness for reclaimed materials, Russell drew a row of four taut, gabled pods clad in recycled corrugated steel and reclaimed Wyoming snow fencing. The building sits close to the street and runs all the way to the back alley, which made room for a more usable side yard. Each section—kitchen/great room; two bedrooms and a study, powder room, and utility area; master suite; and garage—is connected by a continuous hallway on the west.

There’s magic in the rhythm and symmetry. The house is laid out on a 4-foot grid and based on a perfect square; the pods are 20 feet wide and 20 feet tall at their peak, and separated by patios that are all the same size, including a notched front porch that engages the neighbors.

Having made the decision to orient the house north-south and eliminate overhangs that would detract from the pure forms, Russell took other measures to mitigate heat gain. He pushed the house close to the west property line, where a two-story neighbor shades the house, and a windowless hallway keeps out the hot western sun. The courtyards break apart the building to capture northern light, and cathedral ceilings in the great room and master suite also scoop in light. The middle section containing the boys’ bedrooms has a flat ceiling to allow for an attic containing an HVAC unit, which drops air into the great room to the south and the master suite to the north. 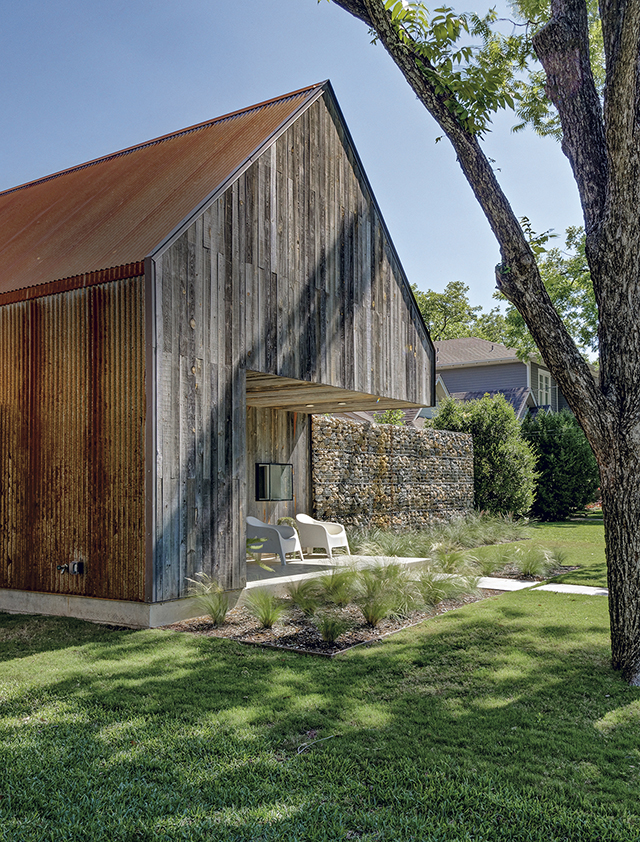 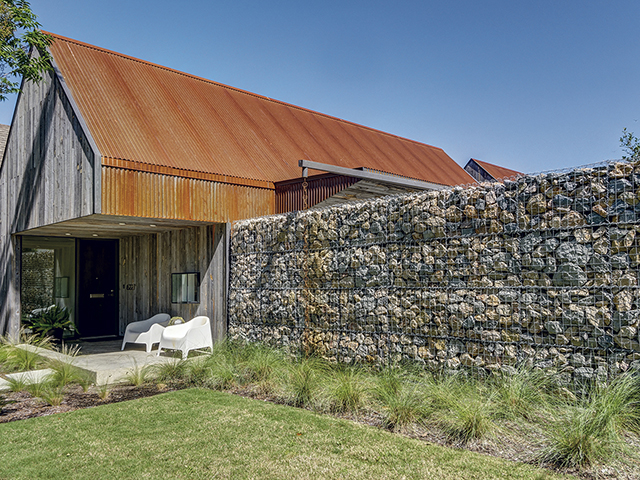 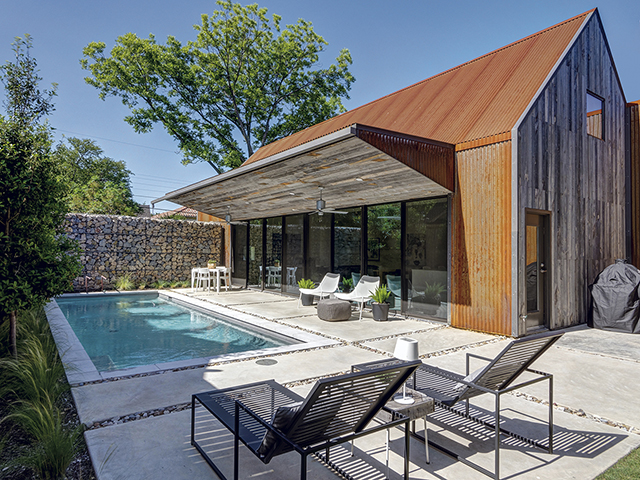 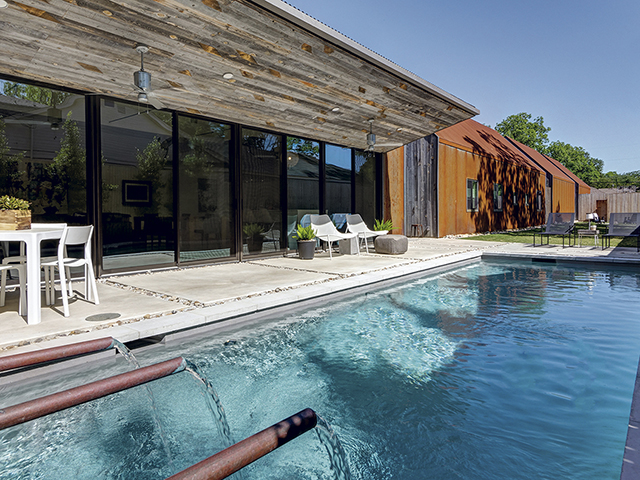 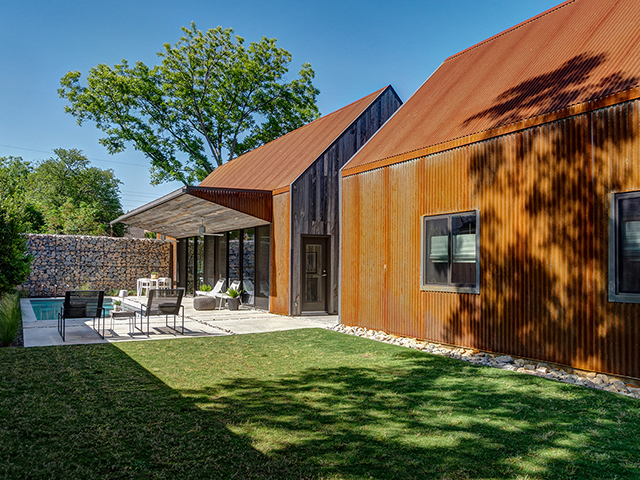 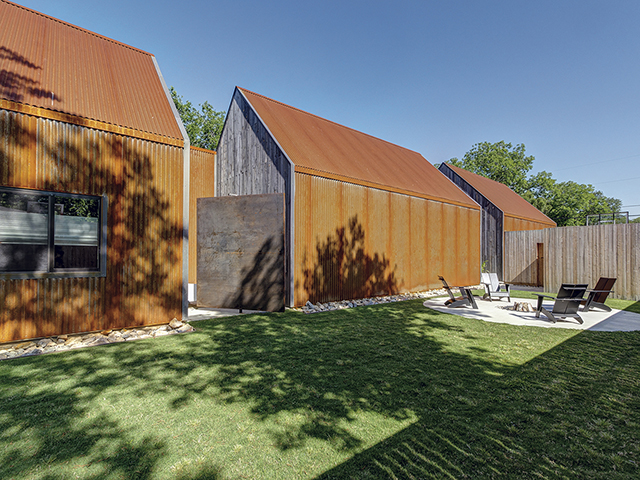 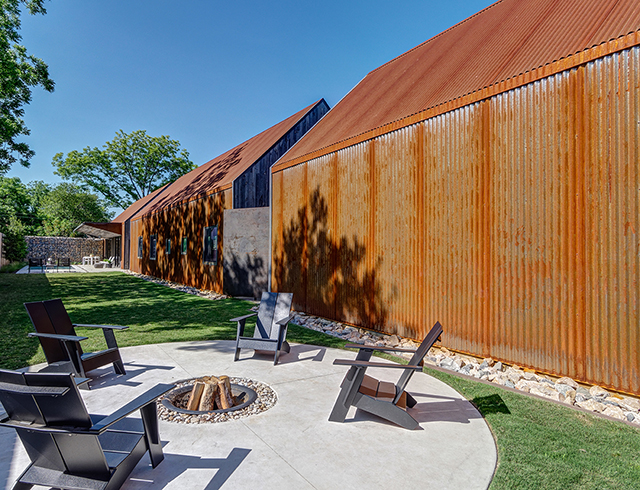 For Russell, the one-story house paid homage to the neighborhood’s history and the existing cottage that was torn down. But the neighbors saw it differently. The rising, barn-like forms were lampooned in no time. “People across the street put signs in their yards that said ‘barnyard’ with a big arrow; other signs had a donkey or a chicken,” Russell recalls. Protesters notwithstanding, the architectural plans disappeared from the jobsite four times. “The contractor felt like it was developers, but it may even have been other architects who couldn’t believe the house was that long and narrow,” Russell says.

If anything, the thefts underscored the irresistible appeal of a fresh face on the block. Early on, some people had also been upset that the house sat so close to the street, but that sentiment soon faded too. “Until we did this project, there were no houses that went up to the front yard setback of 25 feet,” Russell says. “Ours projected out about 5 feet more than the others. But since this house went up, every new house on the block is at the 25-foot setback, so we were real trendsetters there.”

Traditional-minded neighbors might also have been surprised to see an 8-foot-tall gabion wall going up along the street. The same height as the porch roof, it screens the pool directly behind it, outside the great room. “The pool was not originally in the budget; we added it midway and needed to provide an enclosure,” Russell says. “The gabion wall seemed to fit the vocabulary of the rest of the building.”

Twenty-four feet long, 2 feet wide, and filled with roughly 10 tons of rocks, the wall sits on a concrete grade beam on concrete piers, with rebar extending from the top of the grade beam to the wall’s full height to provide lateral support. And while the wire cages almost seem like a DIY project, it was more expensive to build than a masonry wall, Russell says, and it took a few tries to blend the multiple batches of rock just right. “I can say that gabion walls are a good choice, but you need to research how they’re built and provide some oversight so it’s done correctly,” Russell says. Now, “finches and wrens have started to nest in the cracks and crevices. It becomes almost a living wall.”

Directly behind that wall, the cantilevered roofline outside the great room on the east is part of a complex structural system that undergirds both the east roofline and the front porch overhang. “A custom-made steel beam at the house’s front corner allows the engineered joists to be supported together on the same point load, perpendicular to each other,” says Erik Glissman, construction supervisor for Constructive General Contractors, which built the house. The underside of the east-facing roofline is pitched up to bring morning sunlight deeper into the great room. 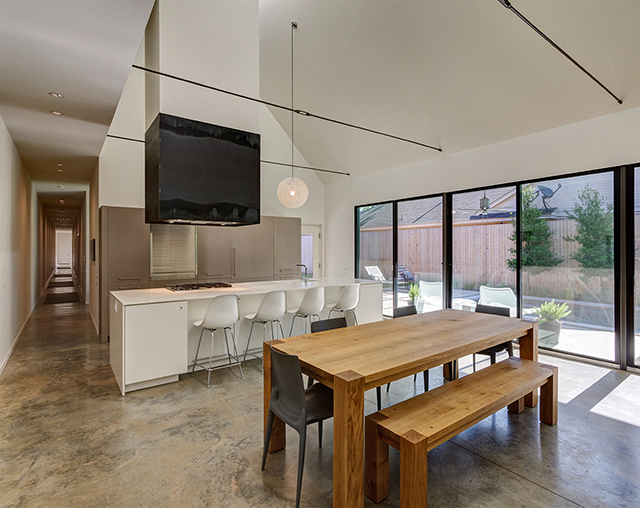 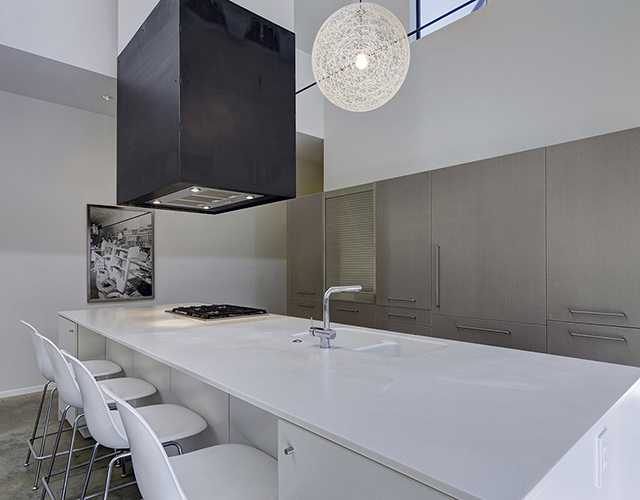 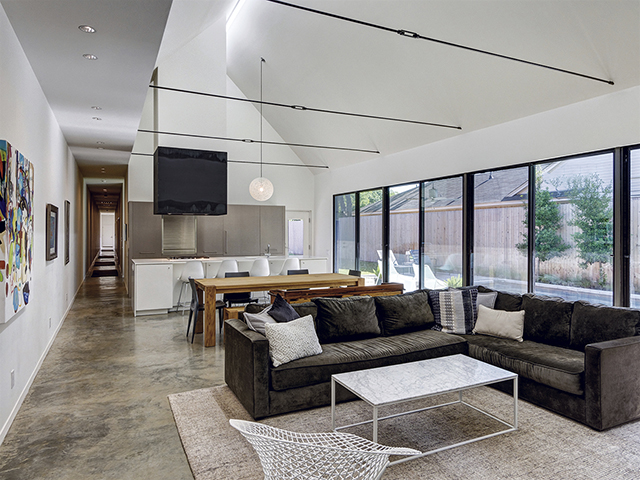 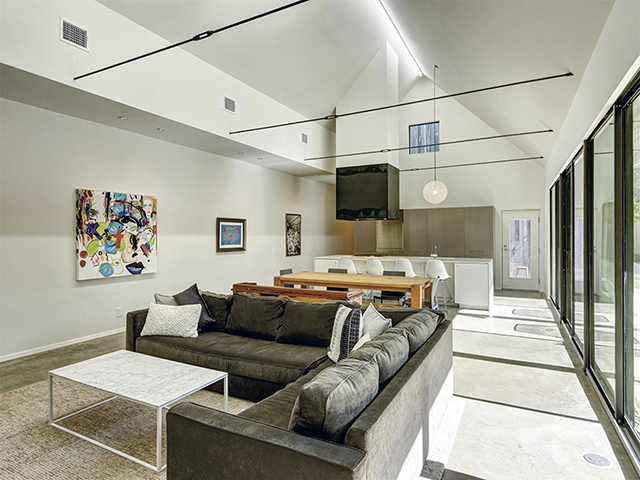 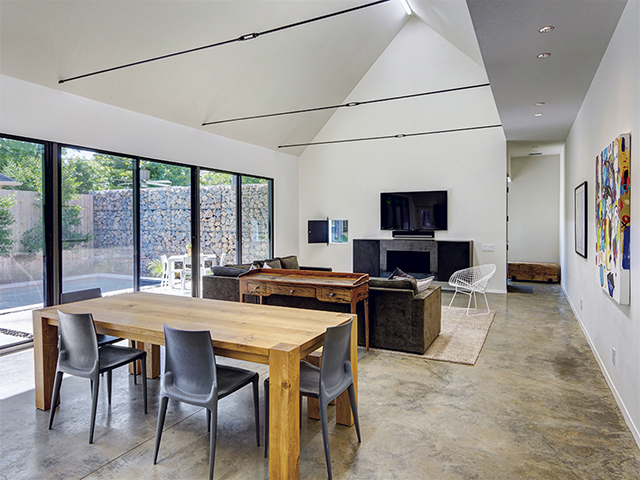 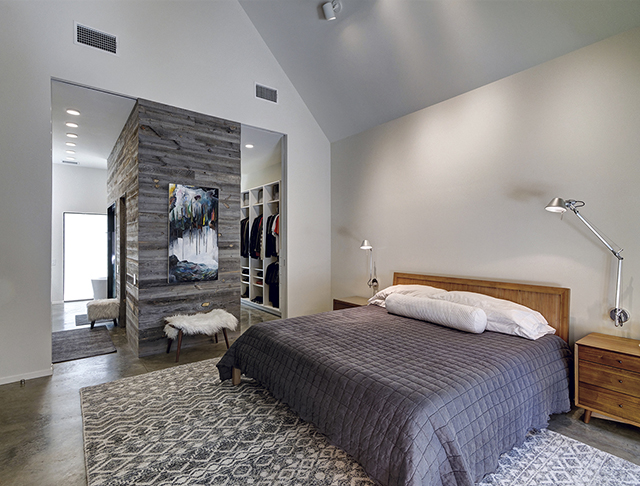 Material choices were economical overall, and key to keeping construction costs under $200 per square foot. The slab-on-pier foundation serves as the finished floor and required special jobsite protocol. After the pour was hand-troweled and cured under a film of water for seven days, “all trades had to work without ever marking the concrete in areas that would be exposed,” Erik says. “Chalk lines could not be pulled through any open areas and had to be a light blue, non-permanent pigment.  Once the home was dried in, multiple layers of floor protection were installed but could not be taped to the concrete. We had a crew remove the flooring protection and meticulously clean the concrete surface regularly. Plumbing and electrical stub-outs had to be located extremely precisely in order to fall exactly in the center of where walls would be built prior to pouring concrete, instead of using void boxes and patching after the fact.”

The concrete floor informed the interior material palette. In the open kitchen, laminate cabinets have a linen-like quality and hide appliances, creating a neutral backdrop in the great room. And the laminate-clad island was fitted with a Corian countertop with integral double sinks. Hot-rolled steel makes several appearances, too. It ties together the cooktop vent hood and the fireplace surround, while the media cabinets on the fireplace wall are wrapped in a black laminate called Leather.

Outside, the snow fencing was milled as tongue in groove and constructed as a rainscreen on furring channels, like the weathering steel. “It doesn’t expand and contract like most of our woods because it’s been cured for so long,” Russell says. With the addition of aluminum-clad windows, “the whole house exterior is maintenance free except for occasional cleaning, which is what virtually every owner wants.”

The owners say the house has become a favorite on the block, perhaps a break from the bulky buildings that weren’t designed for their lots. And a small, 2-foot window cube at the front porch continues to intrigue passersby. “It was an afterthought,” Russell says. “They didn’t want people walking up and looking through the window, so we added a hot-rolled steel door inside with a finger hole to provide privacy but also accessibility. On holidays they can put a pumpkin head or elf in the window.”

While the house stands out, it’s not a splashy architectural statement but a mash-up of simple prairie forms with modern space planning and detailing—and an example of the imaginative skills architects bring to the ever-evolving neighborhoods we call home. 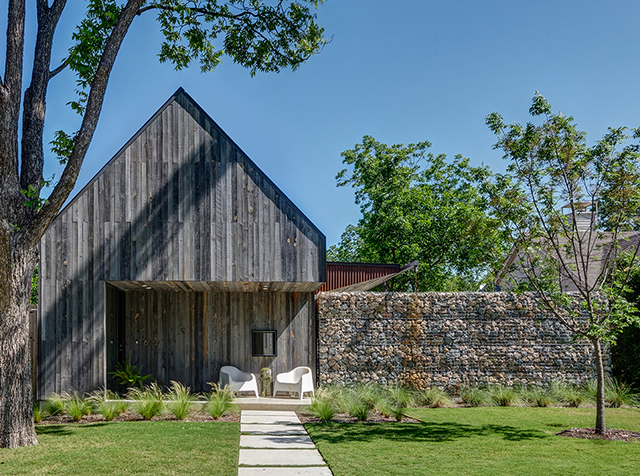 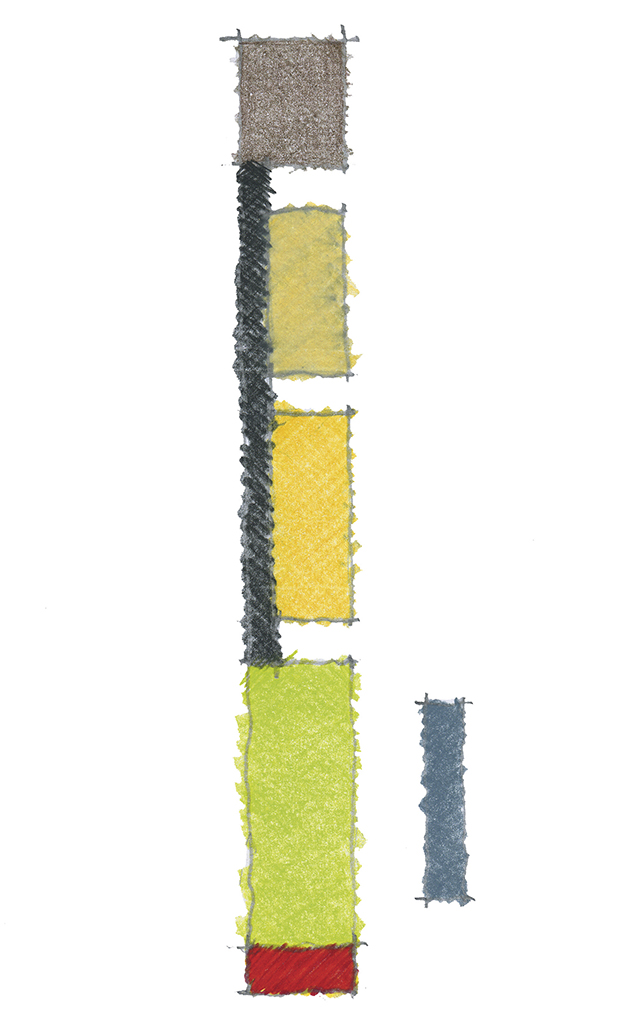 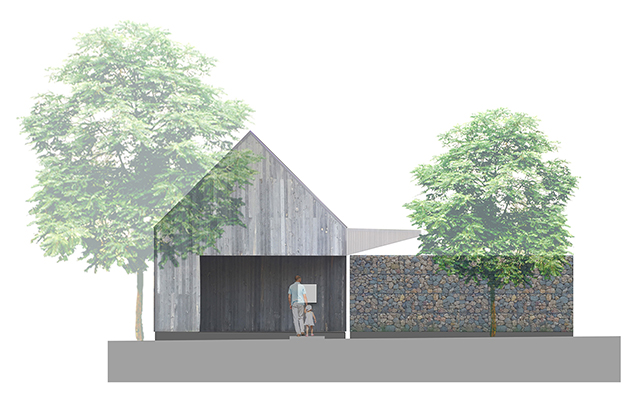 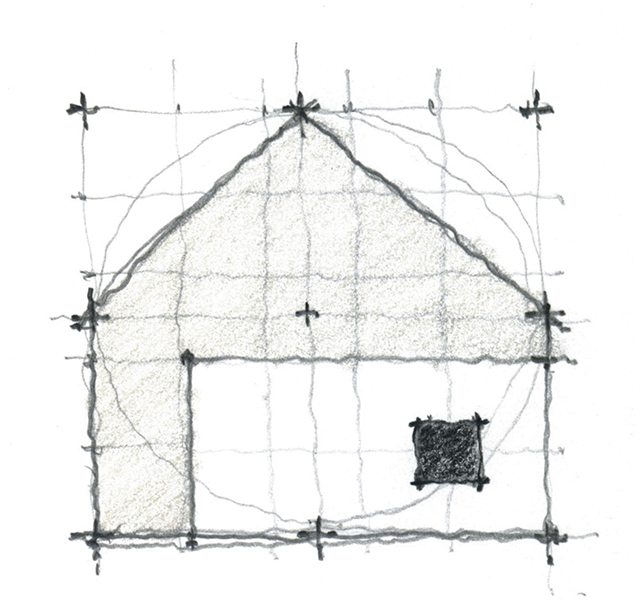 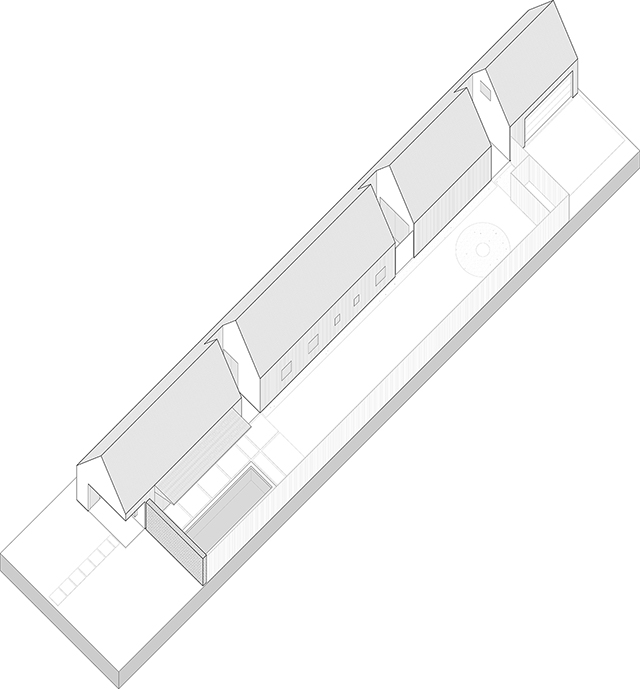 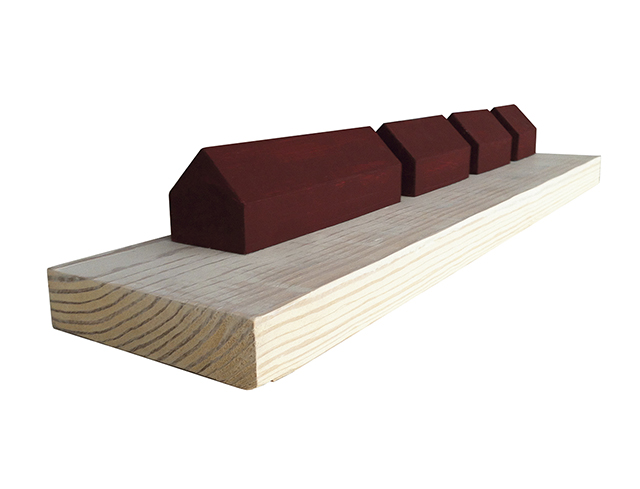 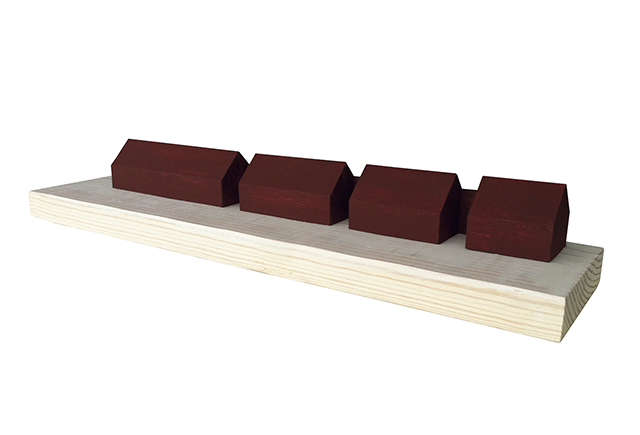 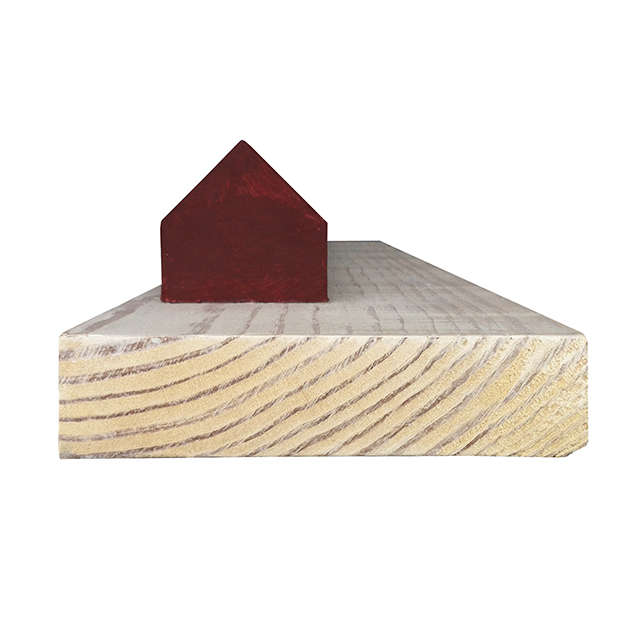 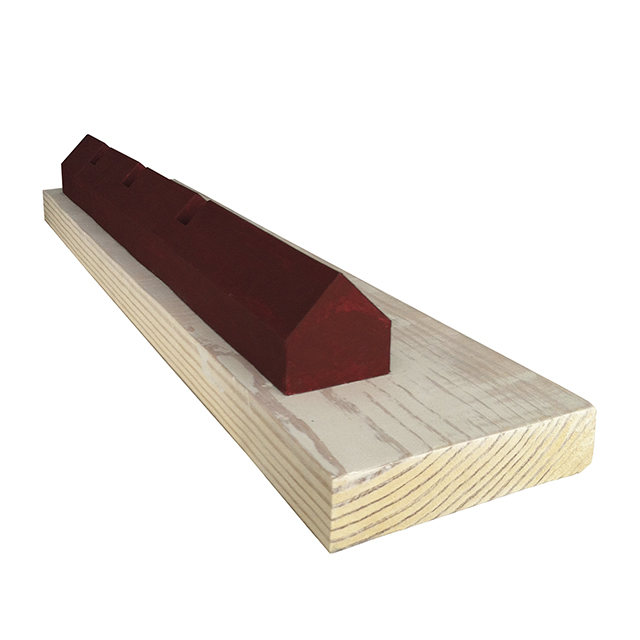