The driveway winding toward this family cabin encapsulates everything Wisconsin’s northwoods is known for. It meanders through a mixed forest of oak, fir, birch, aspen, and red and white pine before approaching the house along an open meadow. You can see through the trees to one of the region’s many lakes where people have fished and canoed for centuries. For the clients, who live in Chicago, it was a dream destination. 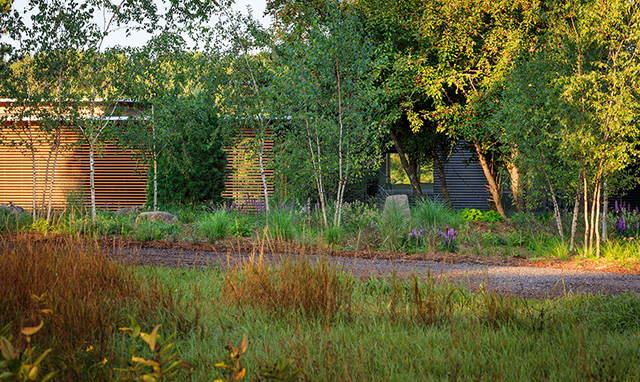 The place had sentimental value too, because the husband’s parents have a house just a short paddle upshore. He grew up spending summers there with his siblings and cousins and had been looking for a spot on the lake when this idyllic parcel came up. The lot juts out on a small promontory and looks across the lake to land in conservancy. What’s more, it had an unusual amount of shorefront—300 feet, allowing for a low-profile house that stretches out rather than up.

“The house could have been closer to the water, but we pulled it back to make it more quiet and private, and so it doesn’t draw attention to itself,” says David Wagner, AIA, a principal at SALA Architects. 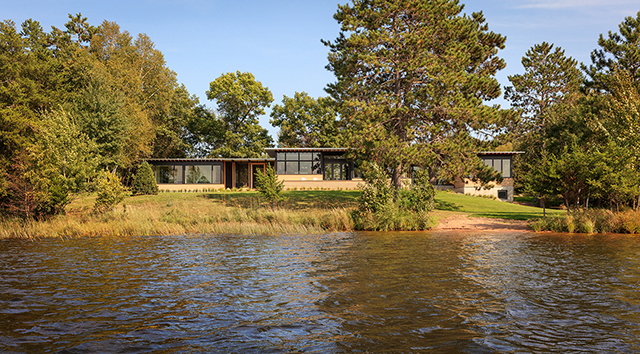 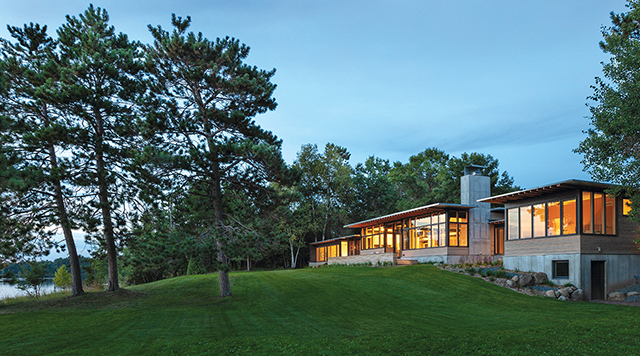 The site fit the program to a T. Empty nesters with three adult sons and two new grandchildren, the clients asked for a camp-like place recalling the 1940s-era wood family cabin. “They wanted bedrooms with a sleeping porch vibe where they could open windows and feel like they’re sleeping out of doors,” David says. 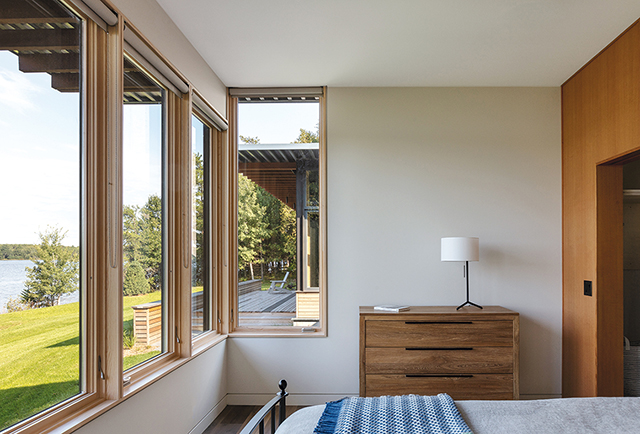 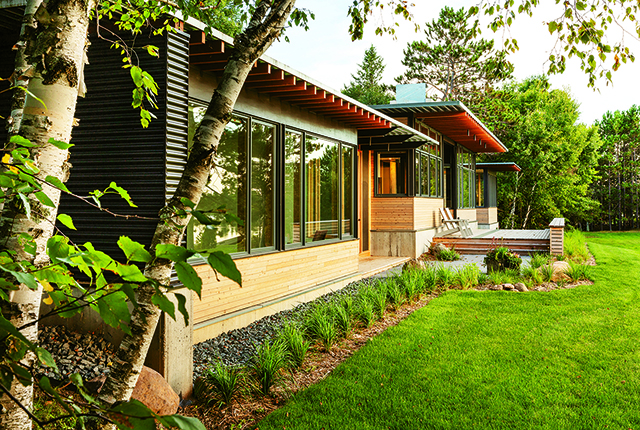 This, and their wish for a low-slung building they could phase in as the family grows, drove the layout of the bedrooms as sleeping pods. The one-story structure is organized along a north-south circulation spine, with a central great room (kitchen, dining, living) and screened porch, flanked by two pairs of bedrooms to the north and south. Hence the name Box Camp—David refers to the great room/screened porch as the day box and the north and south bedroom volumes as night boxes. 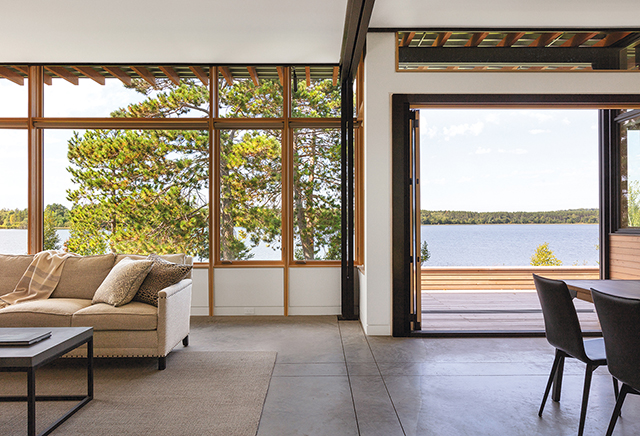 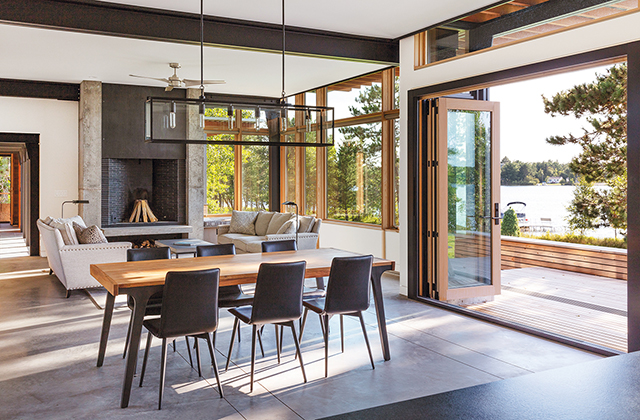 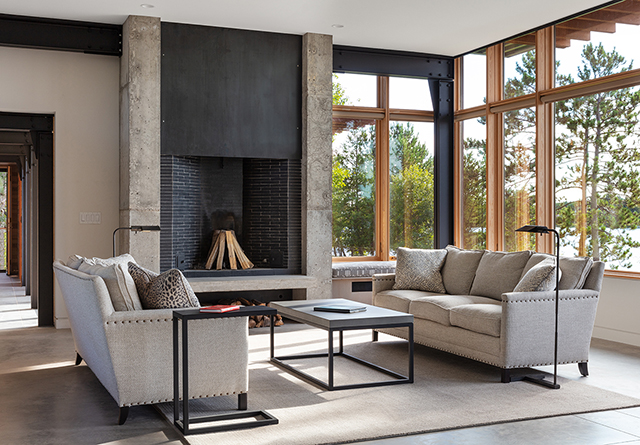 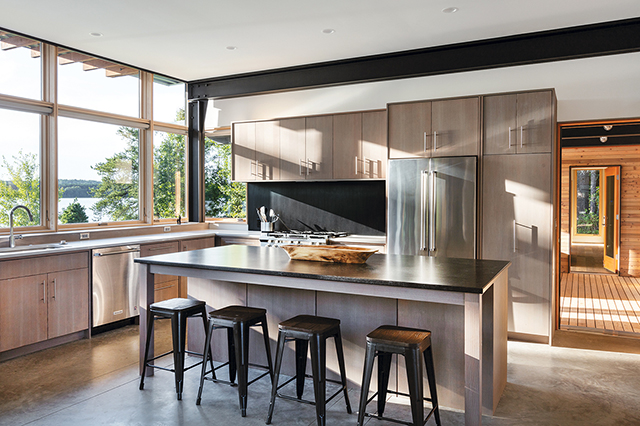 Cabins, in particular, can take a romantically based approach to form and place, and here the two bedrooms on the north are reached via a breezeway through the screened porch. “They feel separate, and you have to step outside and experience the weather as you move from space to space,” says David. The pair of bedrooms on the south segue from the great room via a heated glass connector whose 1-by-4 tongue-in-groove cedar siding passes from outside to inside, conveying the feel of being outdoors. 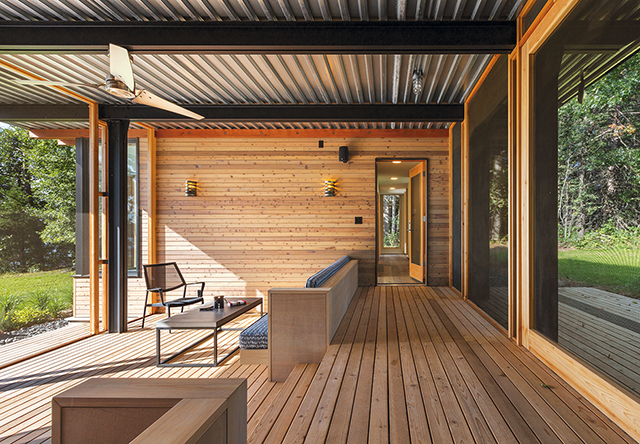 Of course, even the most harmonious sites have some flaws. Here it was the view orientation that presented a mixed blessing. The house looks west across the lake, which is great for viewing sunsets but a challenge because the sun’s low glare hits the interior right at dinnertime. “We explored facing the house more southwest to get more passive solar benefit, but the views were across the lake to houses, so we tilted the house directly west toward the more natural views,” David says. “We dealt with the direct light by using overhangs and shades that filter out some of the sunlight but allow you to see through to the lake.”

Siting aside, one aspect of inspired indoor-outdoor living is a teaser view through a house. Here, anticipation builds as you approach the entry on the long east façade. Its corrugated steel cladding acts as a solid backbone and shields the front from the shared driveway, but transparent cutaways offer tantalizing views to the lake beyond. This is accomplished with a wall-height window in the dining area, the screened porch between the great room and north bedrooms, and the glass connector to the south. The great room’s clerestory pop-up also adds a sense of lightness, playing off the grounded elements. 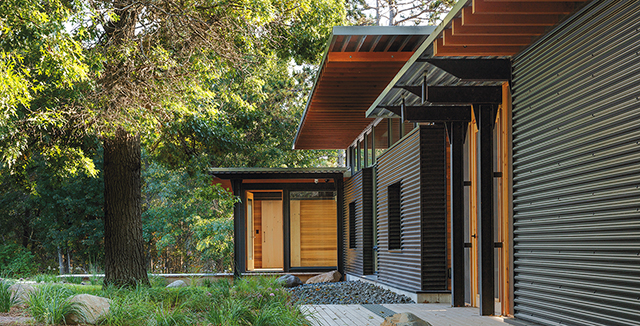 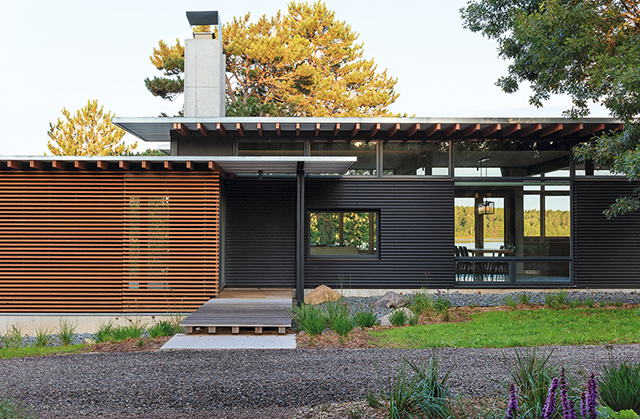 “The black siding in front was intended to help the house be in the shadows; it blends into the ground plane of the trees,” David says. “The black also lets the windows become lantern elements when the lights come on in the evening and the building fades away even more.” This effect is amplified at the glass entryway, where a cedar-slat panel slides across, providing a warm glow of light and marking the front door. In contrast, the rear façade is mostly glass and knotty cedar. 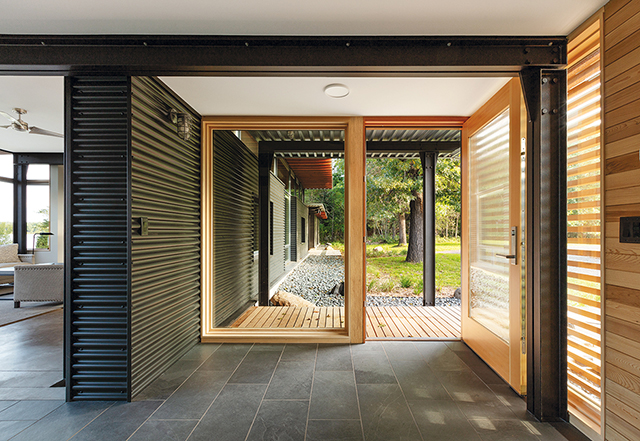 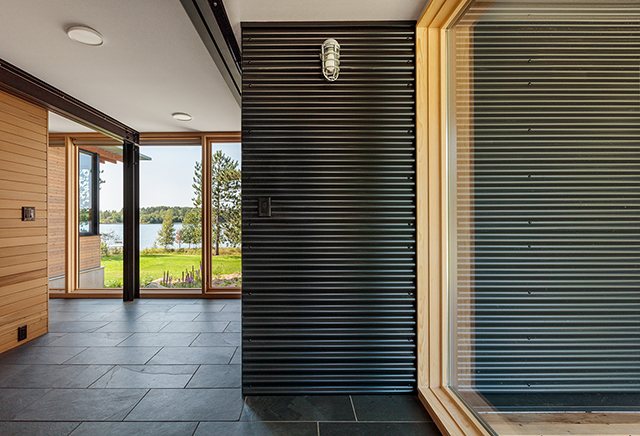 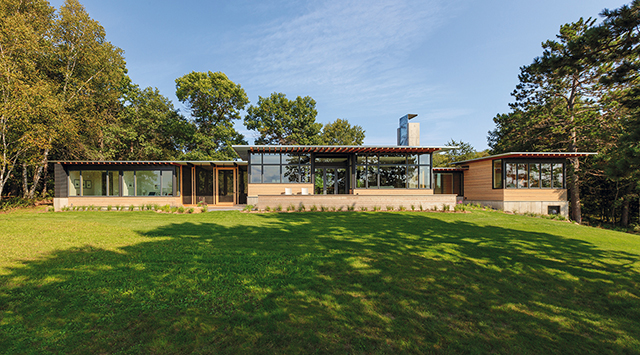 Views and egress points are equally well planned. With the circulation spine running in front of the “boxes,” a window terminating the north axis frames a pine tree. A door on the south axis will open to phase two, now in construction—a pair of rustic guest rooms up in the trees. “You walk out that door and are in the tree canopy; the ground drops away,” David says.

The division between inside and outside dematerializes further on the north side of the great room, where 4-foot-wide pivoting doors invite passage to the screened porch facing the lake. And bifold doors open the entire dining area to the rear terrace. An essential sense of prospect and refuge figures into the scheme too. The steel-clad wall on the entry side contains cabinets and a window seat to hunker into, with the lake on full view across the room. 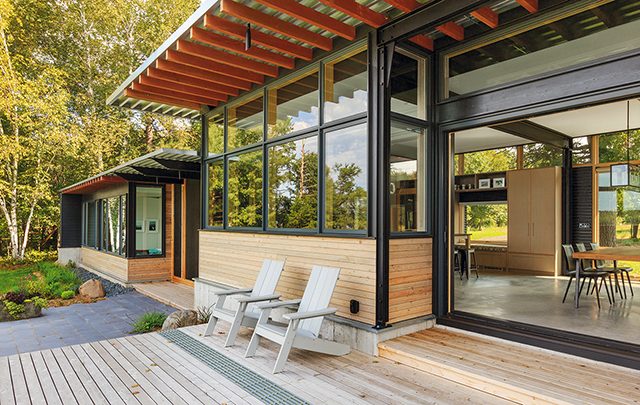 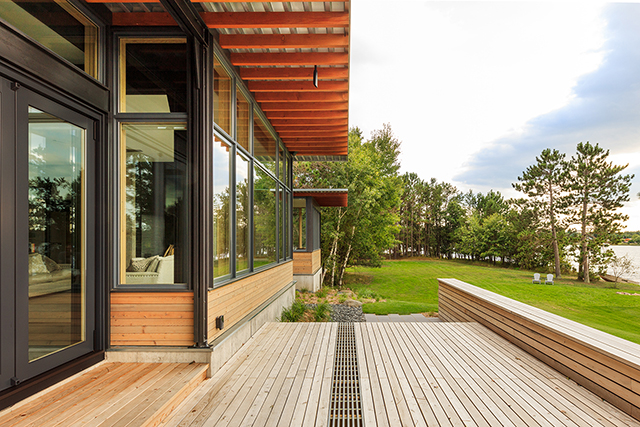 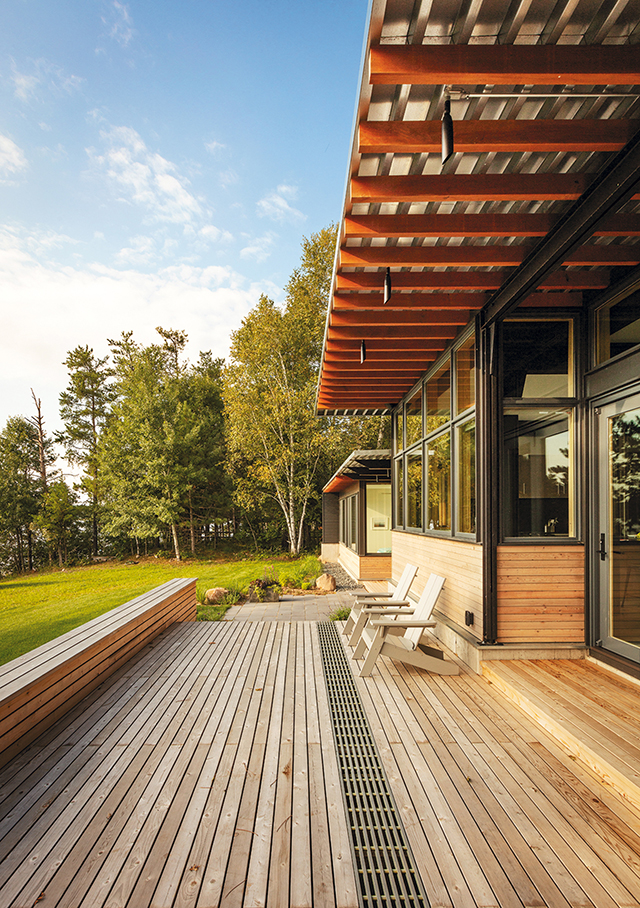 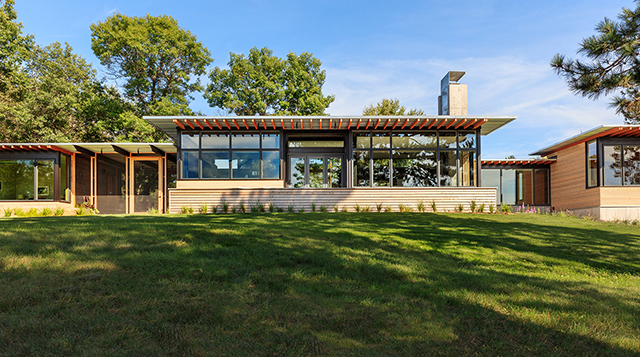 Inside and out, the home’s materials—predominantly concrete, wood, and steel—confer both lightness and solidity and are joined with machine-like precision. The hybrid, exposed wood-and-steel framing sits on a concrete plinth that responds to the topography: the great room is slab on grade, while the north bedrooms have a crawl space for mechanicals, and there is room for a future bedroom and bath under the south pod where the land slopes away.

To create a thin roofline packed with R-50 closed-cell foam and R-15 tapered insulation, the team used corrugated steel decking that cantilevers a good 4 feet on the north and south. Running east-west beneath the roof deck are 3-by-6 Douglas fir joists with tails exposed.

“In a kind of structural sleight of hand, the glass window wall comes tight to the underside of the thin eave framing,” David says. To pull off the illusion, a hidden steel beam carries the weight of that roof eave loaded with snow. “The spray foam under the roof deck fills the structure down to the bottom of this beam, allowing us to have a well-insulated roof while hiding our means of support,” he says. “We minimized thermal bridging by having the insulation encapsulate the point of contact between structural members running north-south versus east-west underneath them.” 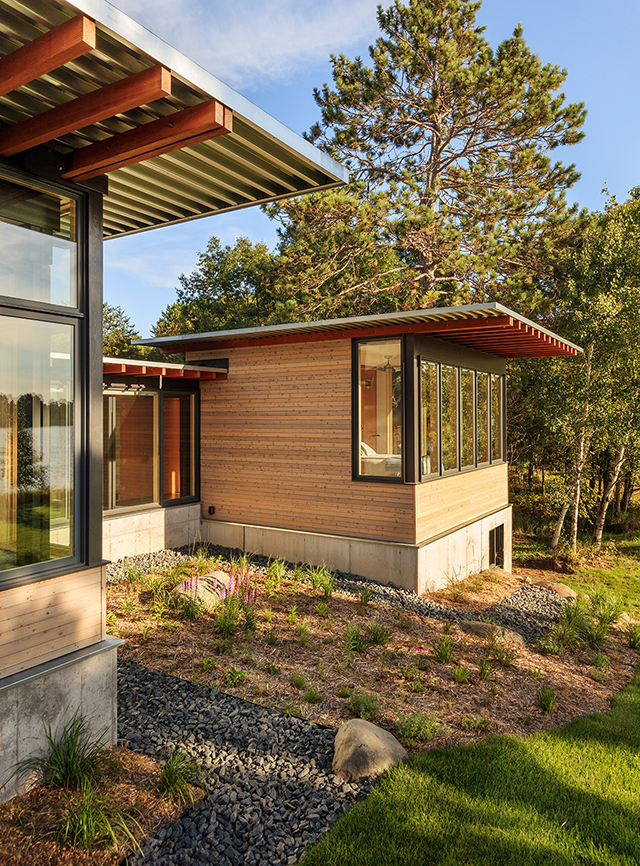 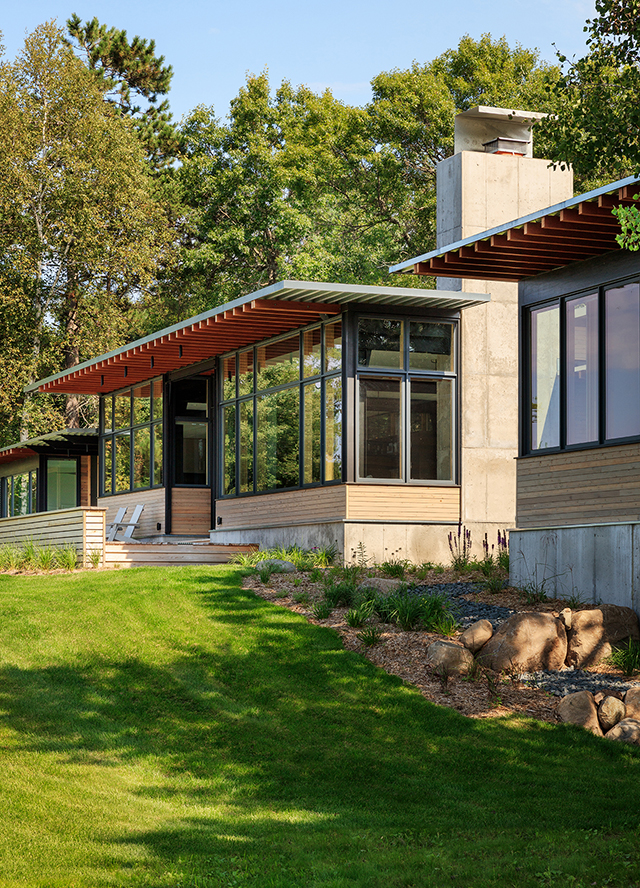 The use of columns and beams with double channels, rather than a flange, created an erector-set aesthetic where column-to-beam connections are finessed with flat steel plates and through-bolted connections. “You get a sense of daylight and views between two pieces of column,” David says. Builder Nick Allen’s crew executed this subtle architectural expression. “We were bolting three pieces together—the base knife plate coming out of the concrete and C channels on either side holding the post,” Nick says. “Everything had to line up to within 1/32 -inch or the bolt wouldn’t go through.”

These decisions lend the building an industrial vibe. “We needed to stiffen the spaces between the large windows, so we turned what would have been the casing into a wind brace,” Nick says. “There were a lot of things like that where structure became part of the look of the interior.” On the C-shaped concrete fireplace, the blackened steel surround pierces the roof to become a weather cap for the chimney. The material appears again on the kitchen backsplash, where it is a quiet complement to the gray quartz countertops and Douglas fir cabinets finished with an acid stain and soft gray wash.

The result of these thoughtful interfaces—between materials, between inside and out—is a comfortable and durable getaway where the family and their friends gather frequently—from Chicago, Minneapolis-St. Paul, and “all over the place,” David says. “It draws them back. It’s the grandkids they’re thinking about now, providing good spaces for everyone.” 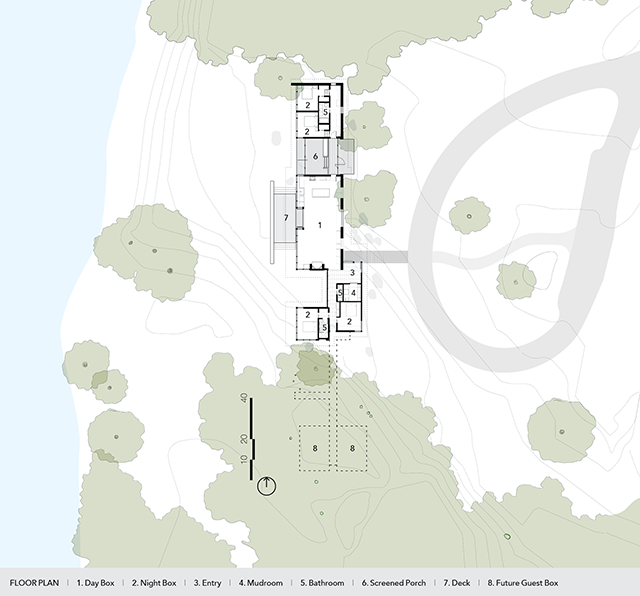 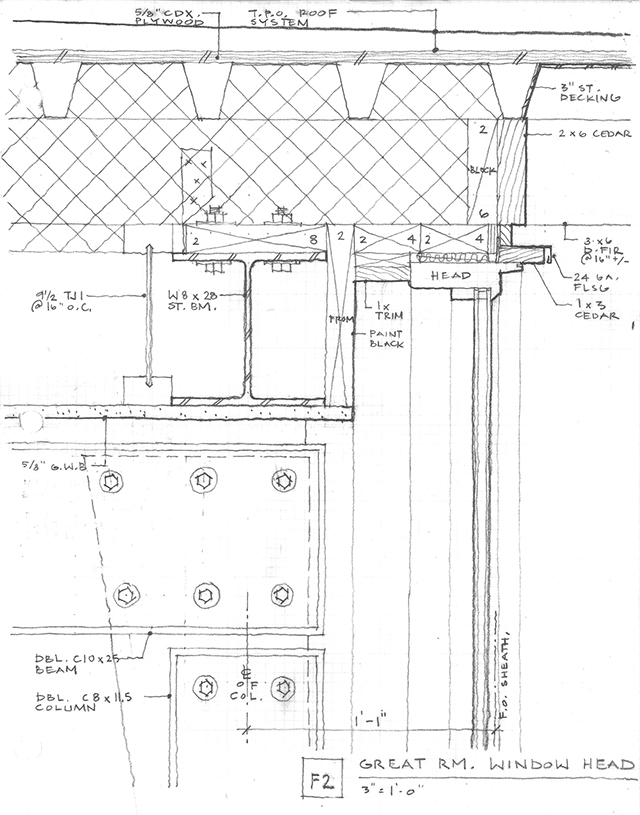 Housing Starts Down in March on Coronavirus Effects