It’s windy here at 10,000 feet, on a rocky cliff overlooking Colorado’s Sangre de Cristo Mountains and the South Platte River Valley. Given south Park County’s cold, snowy winters, it’s a far cry and a long way from Bogotá, Colombia, where the owner of this cabin compound lives for most of the year. A painter, she’d been coming to the area to ski for 30 years, and her son is a student at the Colorado School of Mines in Golden. “She wanted a place to land when she came to Colorado,” says architect Renée del Gaudio, who designed the cabin getaway.

The town of Fairplay, population 817, is also a far cry from a resort ski town, though it’s just 20 miles over Hoosier Pass from Breckenridge, the closest town. “It was an interesting choice to build in this area,” Renée says. “This was a very affordable piece of land in the middle of nowhere.”

Her client’s directive was brief, to the point, and described a feeling rather than a physical object. She wanted a sense of being perched over the edge of the cliff; she wanted a cabin that would provide openness yet privacy for her and her two children; and she wanted to save a beautiful old pine on the property. “She approached the project in a very intelligent way in that she didn’t show up with a slew of images of what she wanted it to look like,” Renée says.

In developing a modern interpretation of a traditional cabin, Renée started with the type’s ephemeral qualities: a place in the woods to get away; a life pared down to basics; quiet, minimalist, and without a lot of distractions. Perhaps most important: the building should belong to the landscape and Fairplay’s vernacular culture. 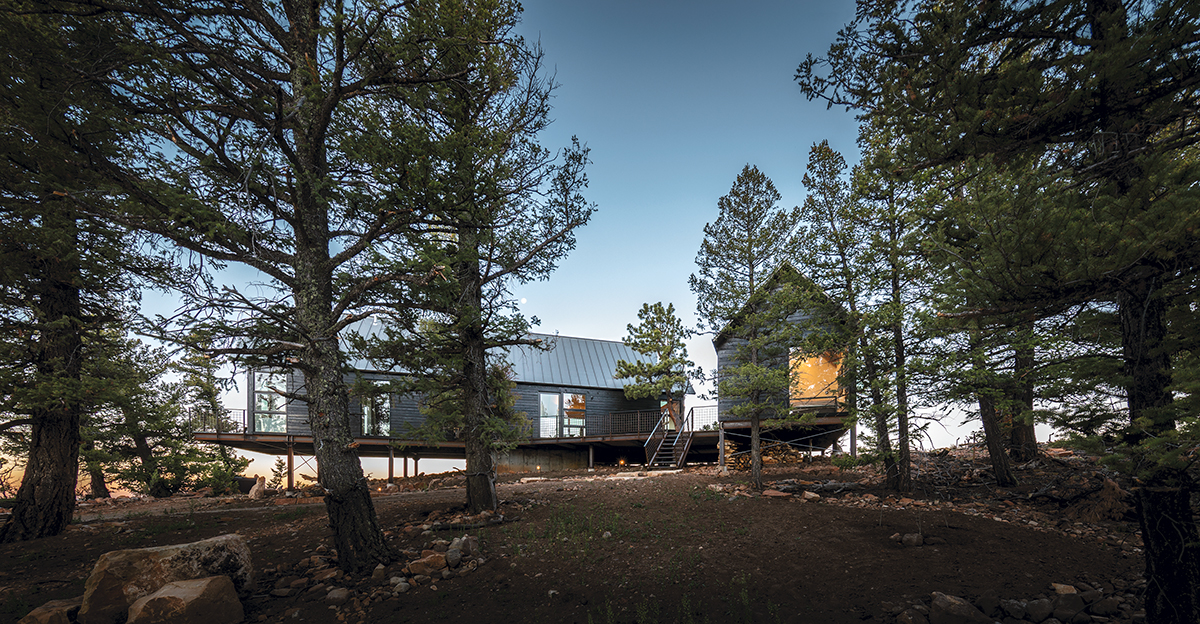 Given the narrow, 1-acre lot and the need to save the tree, it soon became clear that one long house would not work. Renée sliced off a piece of her sketch, creating a smaller sleeping cabin that sits parallel to the property line, and cranked the main cabin to make it fit. With the pine tree growing between them, the main cabin is angled directly south for solar gain and a spectacular view of the mountains. It contains the living quarters and master suite, and its glassy gable end frames Quandary Peak on the back side of Breckenridge.

By contrast, the smaller cabin focuses more on forest views. Containing two bedrooms and a shared bath, one bedroom gazes into the trees, while the other room’s gable window frames the scenic Collegiate Peaks. “The surprise of the site planning was that we created this nice wind-protected space between the cabins, which was important on this site,” Renée says. “The little cabin blocks winds from the west.”

Another move that elevates the concept, literally, is the carbon steel–grate decking—“a big snow strainer”—that connects the cabins. With the tree growing up through it, the deck floats above the rocky land and makes sense of the buildings’ offset geometries by shaping the void between them. “Steel grate decking is commonly seen in ski resorts and is extremely slip-resistant,” Renée says. It eliminates snow shoveling, to a degree. It’s not a shoeless deck—it’s not comfortable on bare feet—but the pros outweigh the cons.” 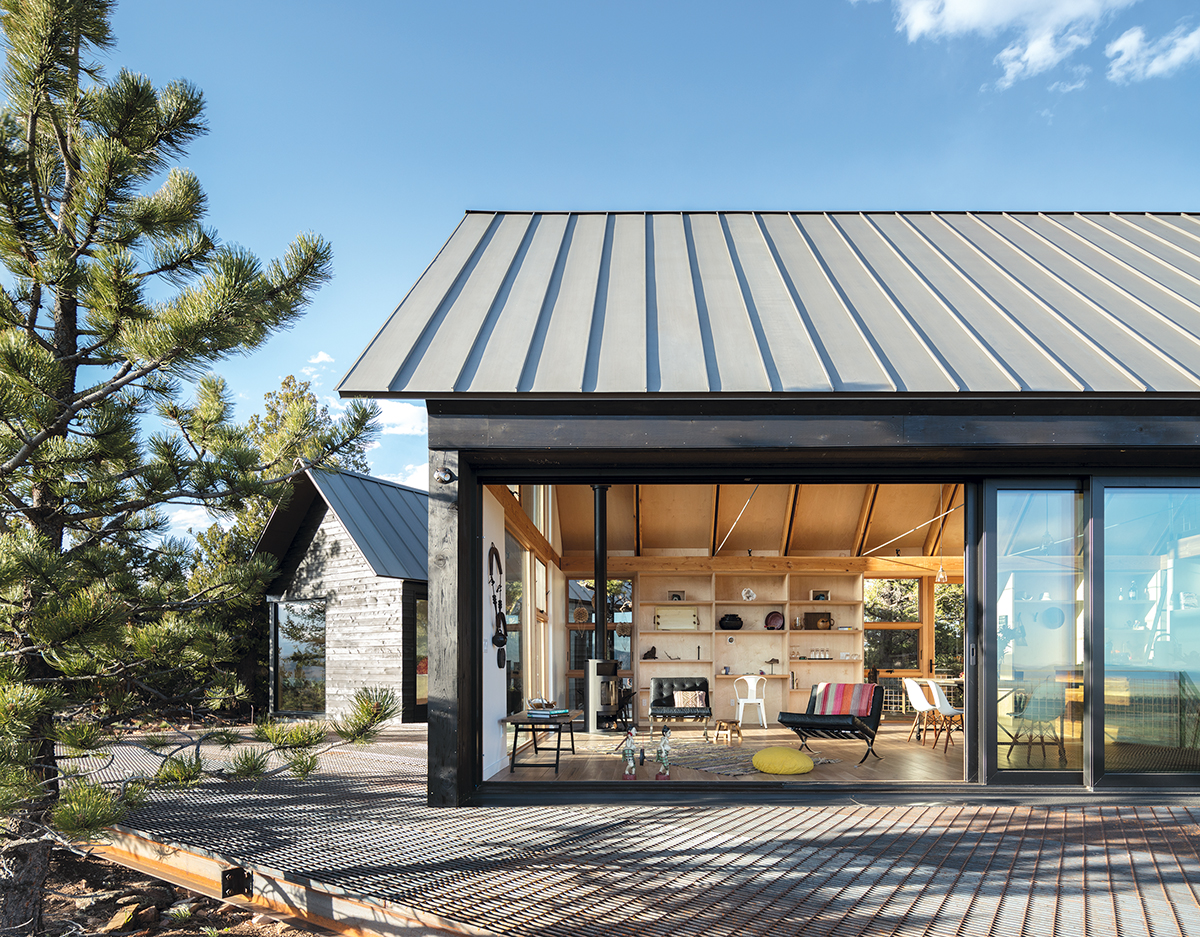 Almost the entire project was lifted off the ground to reduce excavation and let the snow and rain drain to the original contours.  The cabins are suspended on isolated pier foundations, though a small part of the main cabin, containing the mechanical and storage, rests on the ground.

Raising the cabins on their spindly legs was a bit tricky at first. “Until the metal framework for the deck went in, it was hard to keep everything stabilized and straight,” says builder Brian Peoples. “The cabins rest on steel piers with diagonal bracing at one end.” Nine-and-a-half-inch steel floor joists topped with 3/4-inch plywood added support during construction. The subfloor is a layer of lightweight concrete embedded with radiant heat and finished with rustic-grade walnut planking. In fact, because the cold can circulate under the house, all of the plumbing water lines were run in the concrete subfloor to keep them from freezing. “To get the water to the cabin, they were run in 4-inch PVC pipe with the heat lines and enclosed in a highly insulated chase,” Brian says. “This was one of the biggest issues in making the house work.”

Agricultural buildings along Highway 9 inspired the cabins’ plain profile and 12:12 roof pitch. Their ebony-stained cedar siding blends with the land, as does the bonderized standing seam metal roof. Matte and more natural-looking than galvanized metal, it was left unfinished. 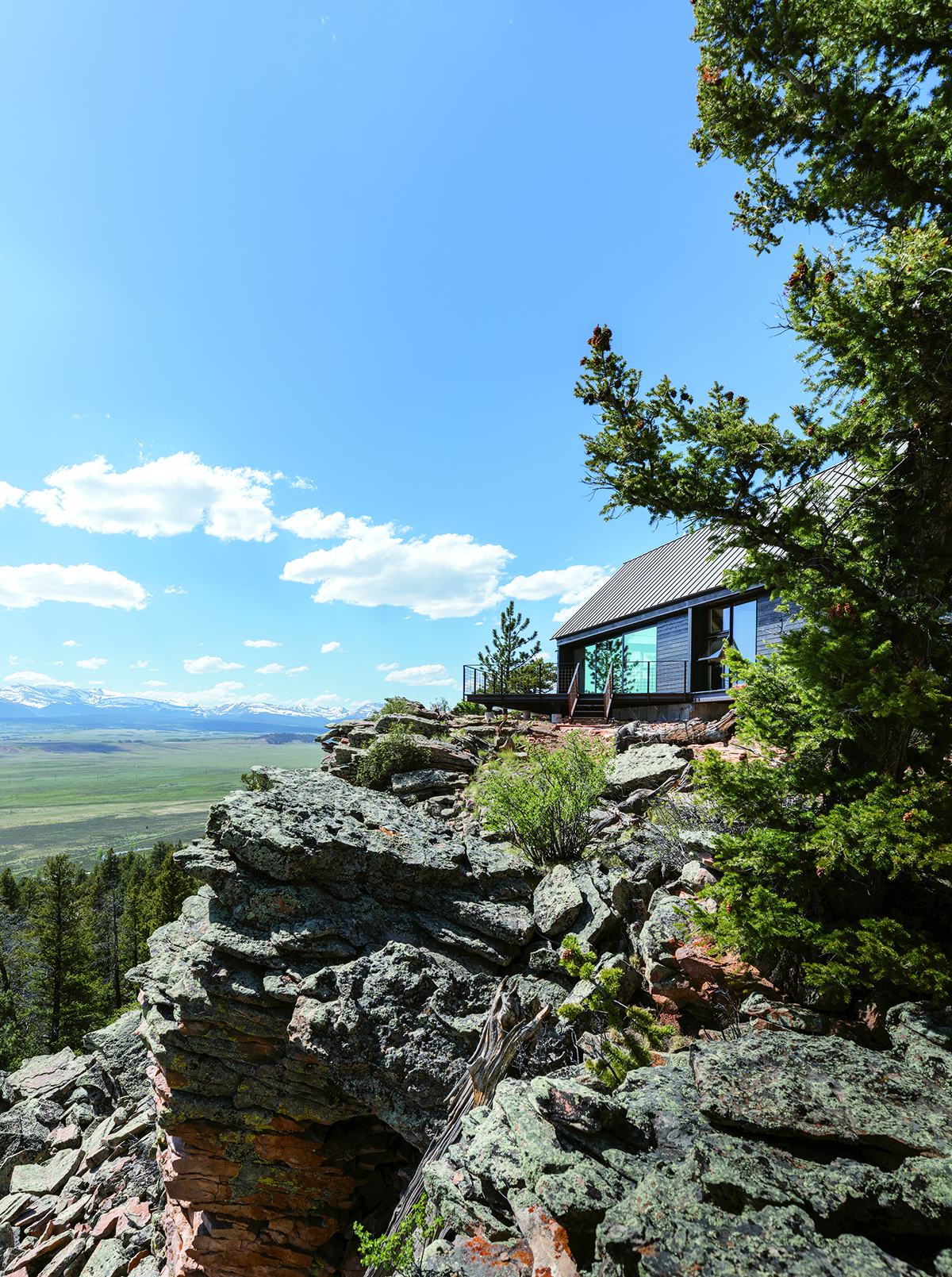 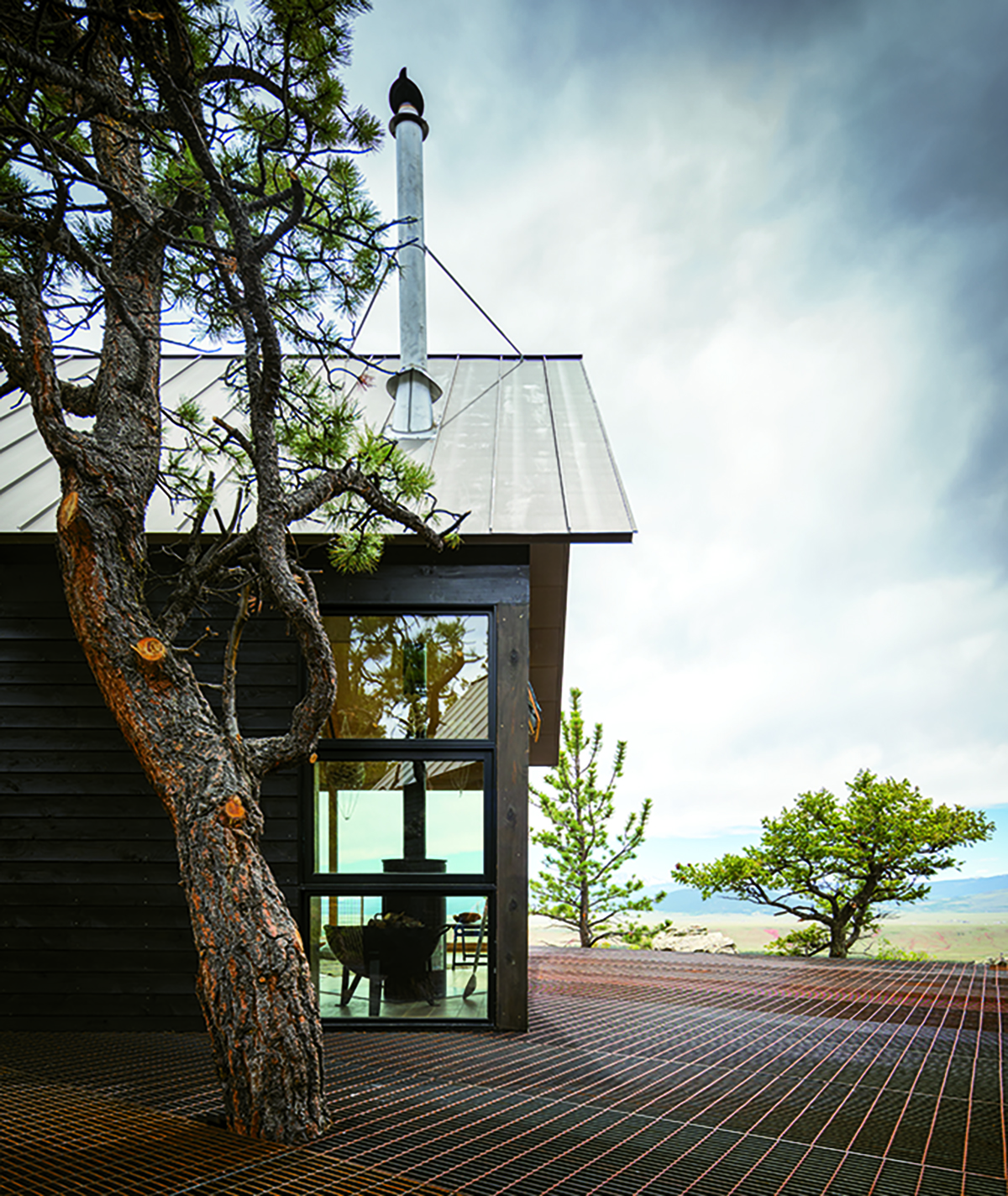 The cabins’ simplicity, form, and function allow the family to come together and relax without having to worry much about upkeep. But their interiors evolved well beyond the confines of minimalism. Baltic birch raw plywood ceilings lend a low-key, rustic feel that resonates with the local vernacular and, in some places, wrap down the wall. They also reduce glare coming from the glass walls. The plywood panels were installed on top of double 2-inch-by-12-inch exposed rafters with a small gap between them, which lends a lighter look than 4-by-12 rafters.

That layering led to “a challenging sequencing of construction that Brian solved for us,” Renée says. “The issue was that the electrical wiring in the roof had to be visible from below for inspection, but it couldn’t be inspected until the roof was dried in, which meant installing the plywood above the rafter. That made it impossible to install the exposed rafter and ply ceiling in the way we thought we were going to. He came up with this great idea that I’ve used on subsequent projects.”

Brian’s solution was to nail 5/8-inch plywood strips to the top of the double 2x12s, which left a gap that the finished ceiling paneling could slide into after the wiring was inspected. “There is another layer of framing perpendicular to the 2x12s where the insulation and electrical live,” Renée says. “So it’s like a double system. The electrical was installed, then inspected, then sprayed with foam, and the bottom of the cavity is the finished plywood slipped in from below.”

Under this inviting canopy, the open-plan living space contains a kitchen with oak shelves and walnut millwork cabinets in the same rustic grade as the flooring. The island top is oak butcher block, juxtaposed with a poured concrete countertop along the back wall. The loft above the kitchen, accessible by ladder, is a dedicated art studio. Echoing the grate decking outside, its railing is composed of steel T posts with welded wire grid infill. The living area’s deconstructed effect gives the outdoors its due and makes everyone feel like they can put their feet up.

This is true in the master suite, too. “She said she wants to feel like she’s showering outdoors, but you can’t do that in this climate, so we designed the next best thing,” Renée says. Occupying a corner with floor-to-ceiling windows, the shower and tub sit directly in the bedroom and are enclosed with glass, so that they take in long-distance views to the south and forest views to the north and east. 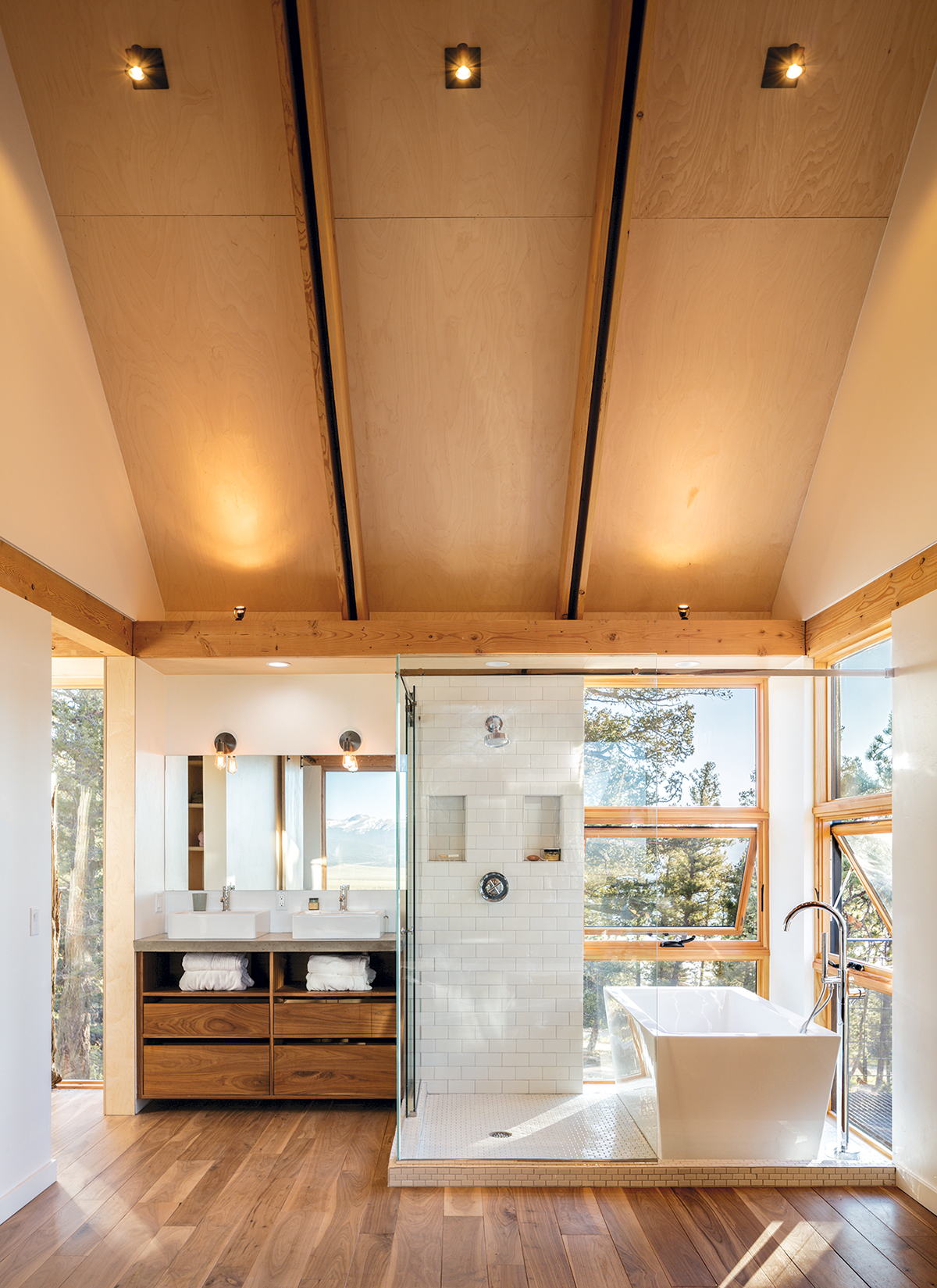 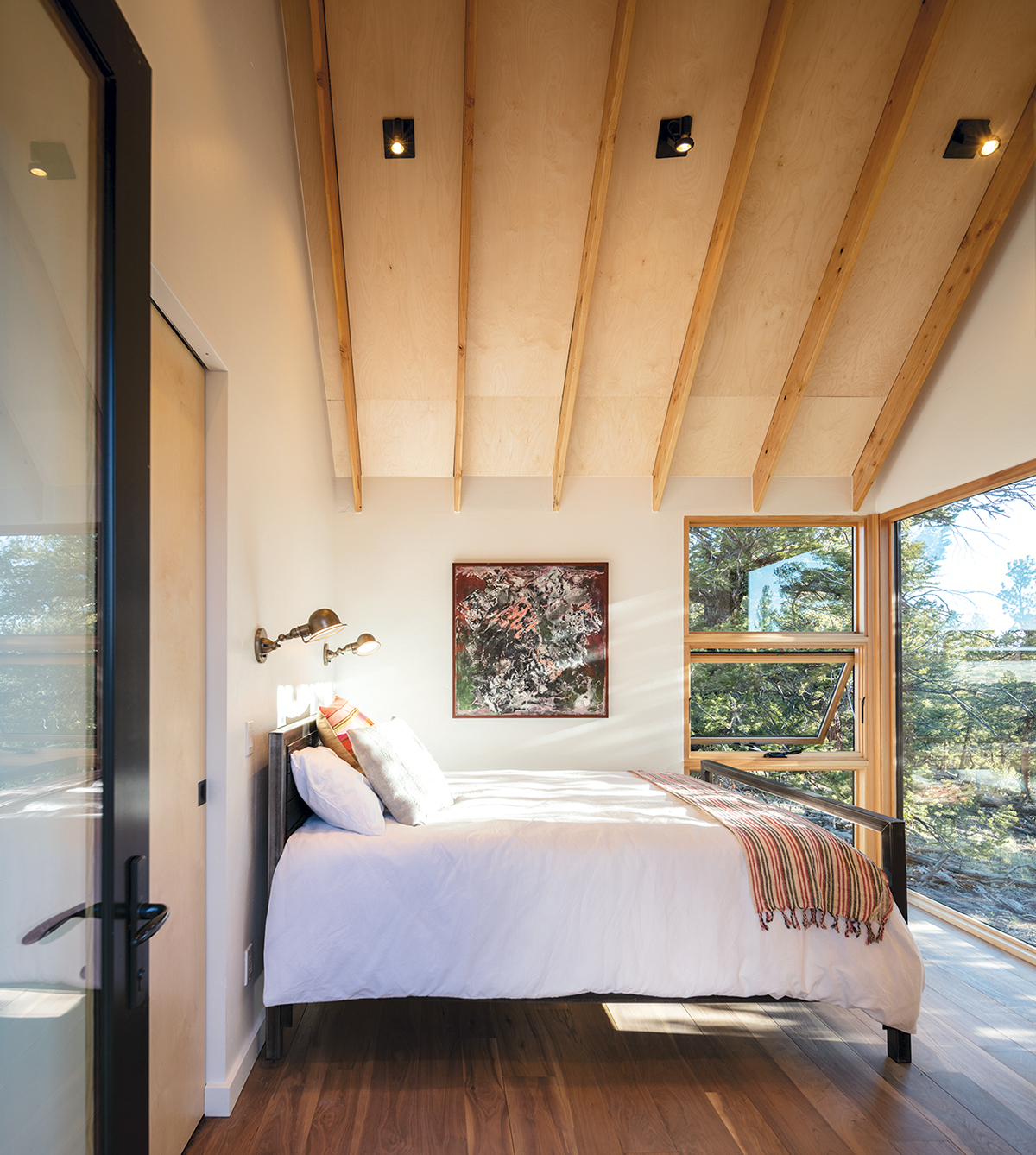 In deference to its natural environment, the cabin also consumes very little energy. A super-efficient RAIS wood-burning stove in the southwest corner of the living room heats the entire cabin “when it’s really going,” Renée says, and a ceiling fan and cross-ventilation—opposing windows are everywhere—eliminate the need for air conditioning. The house is also prewired for a 3-kW solar array to supply all the electricity.

Snug, practical, and flexible, Big Cabin/Little Cabin is clearly rooted in a humble past. Yet its bold, modern moves celebrate the building type as a constantly evolving architectural legacy. With its simple form, shared hearth, and direct relationship to nature, this destination dwelling aptly demonstrates what makes a cabin experience so special. 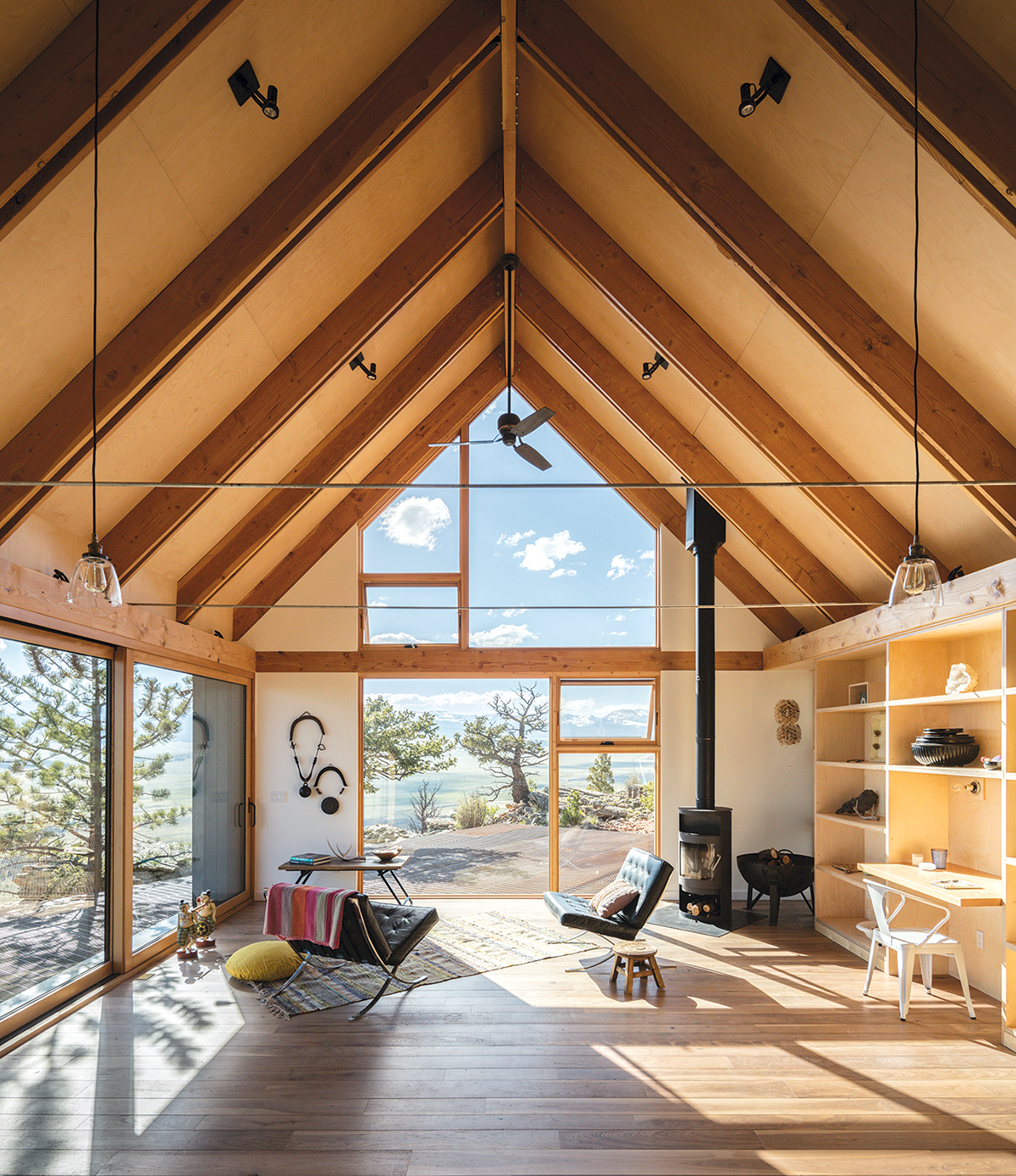 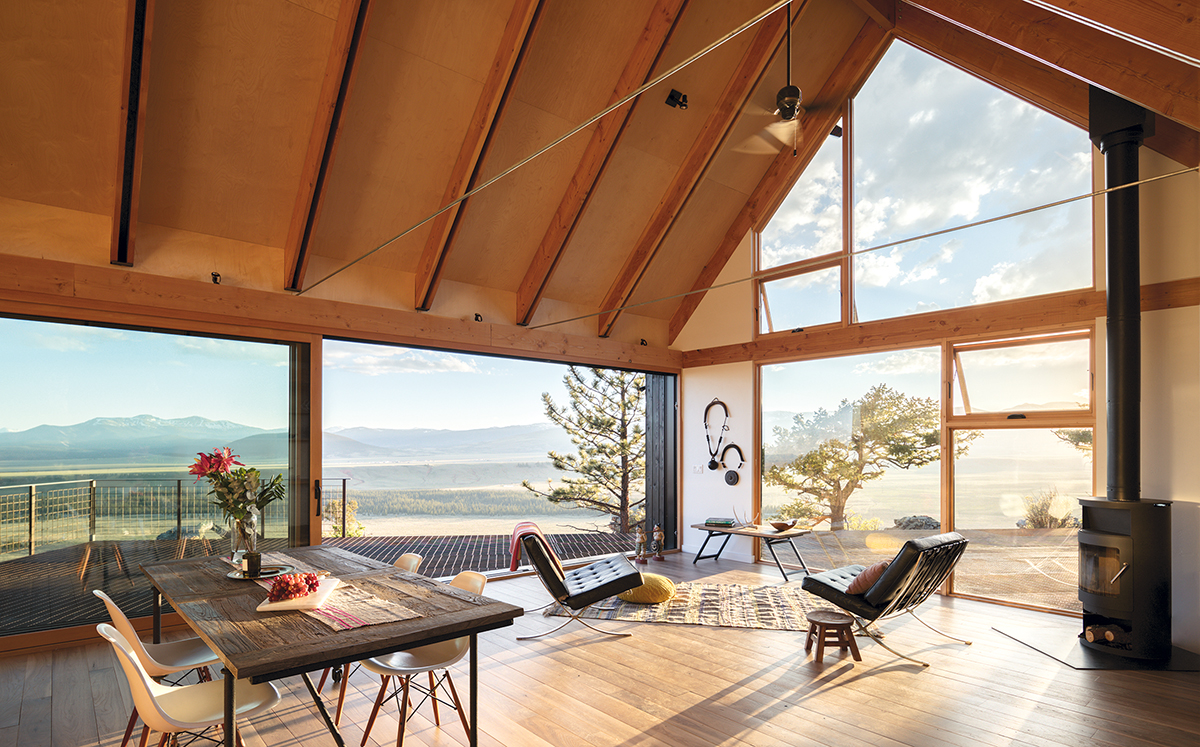 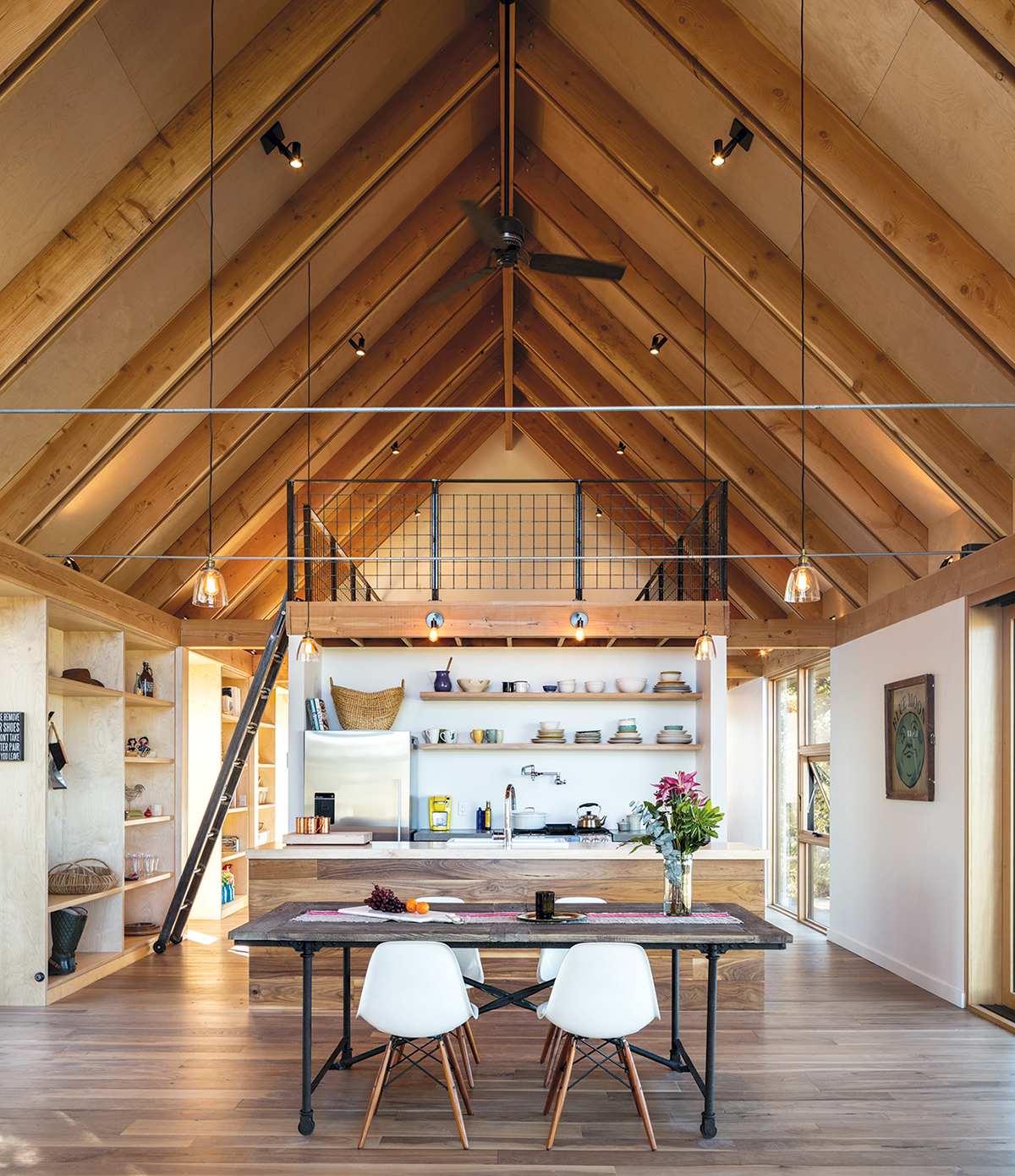 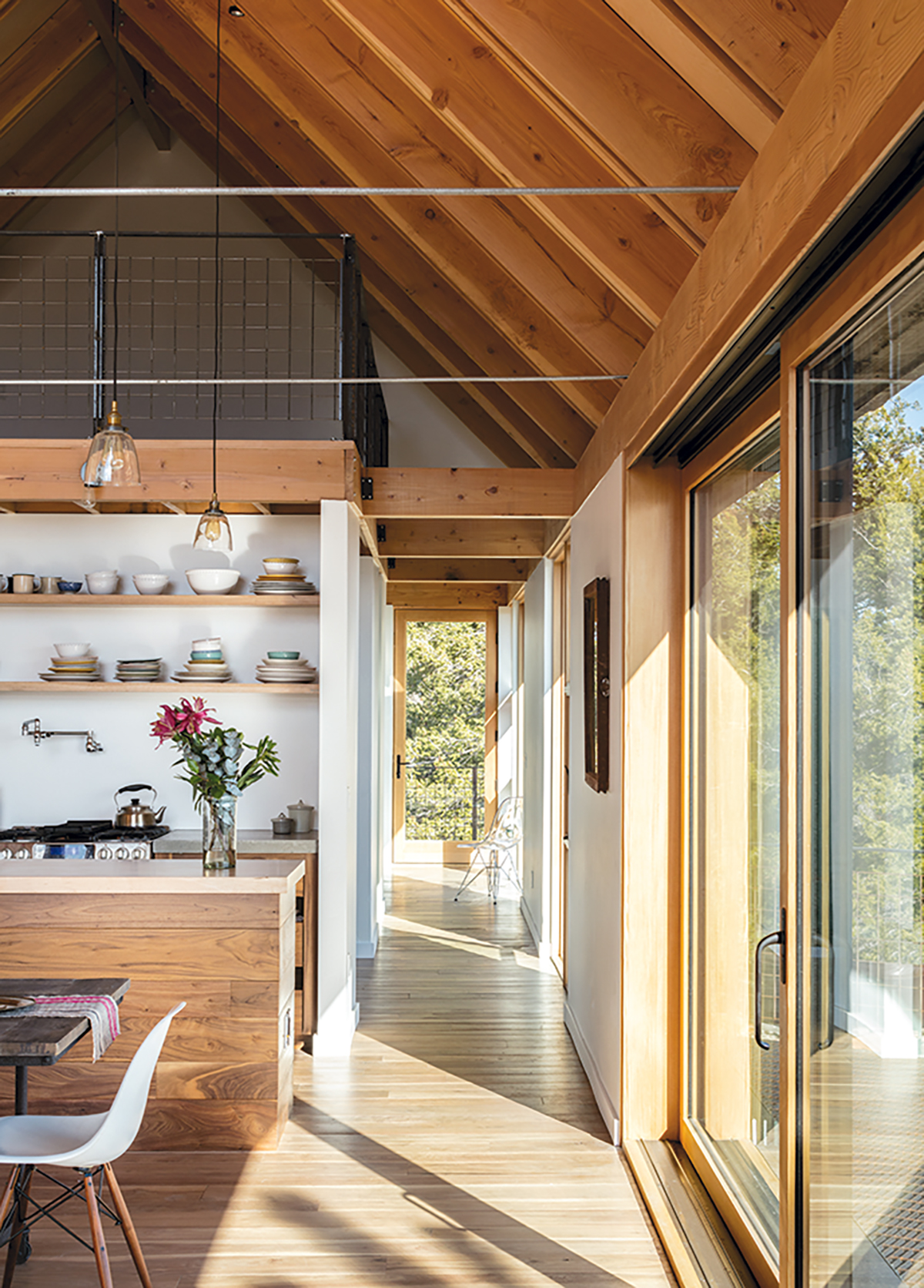 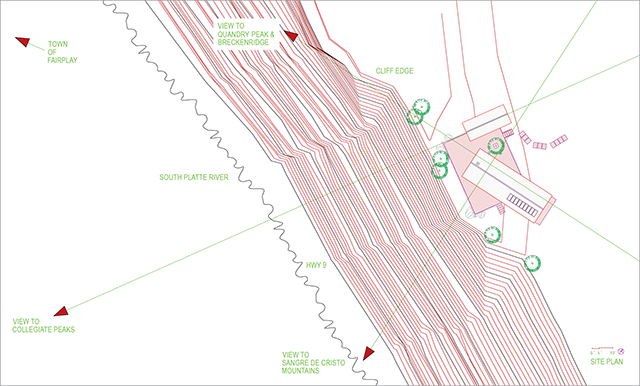 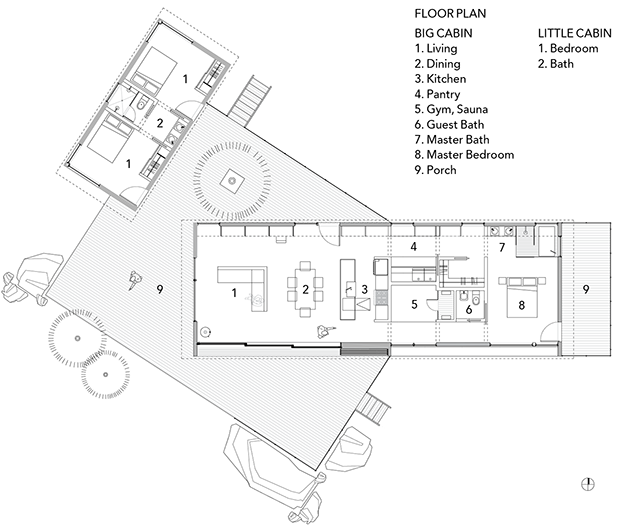