Before pursuing architecture, Donald Lococo studied piano, taking lessons from the same instructor as Glenn Gould in Canada. He moved with facility between classical and contemporary music, and it’s that virtuoso flexibility he now brings to design. His firm is adept at toggling between traditional and modern projects, as work in the Washington, D.C., area often entails, but his favorite projects explore the infinite possibilities of mixing the two. Such was the case with this Honor Award-winning house in Arlington, Virginia.

“I love the tension and the dialogue between the traditional and modern elements,” he says. “It’s like an Oreo cookie.” The original house was a 1940s Tudor-style subjected to hodgepodge changes over the years. It needed a serious sorting out and a small kitchen addition to make modern life function properly within its walls.

Donald considers Tudor a romantic style—a perception that guided his updates. First, he stripped away unnecessary flourishes, or what he calls the “glop added in the 1970s and ’80s,” shoring up the good bones of the original. Then, any new work or details he inserted had to tap the same romantic vein—albeit through a modernist filter. “With each element we added, we had to ask ourselves—can we say it with less?” he recalls.

Peeling away the “glop” revealed original black metal windows and white plaster walls, which became the palette for the kitchen/breakfast room addition. Other forms derive from existing roof pitches and dormer windows, but are pared down to essentials and then inflected with a romantic exuberance. Everything is clean and simple, but a touch exaggerated—like Alice in Wonderland or an awe-inspiring cathedral.

“When you leave the original Tudor spaces, your mind is still in the brain wave of the romantic. But, in the addition, it’s like origami—a kind of floating Tudor with chiseled dormers punctuated by thin steel. And then there’s the cat’s cradle over the island.”

The “cat’s cradle” is a meticulously detailed shelving system that appears to hover atop the island, but that actually supports the ceiling structure. Executing its connections through the ultra-thin counter surface was no easy task. “The amount of weight that comes through it is amazing,” says Donald.

Just as exacting are the sinewy “kerfs” cut into the cabinetry and millwork, adding a subtle movement almost like music. They evoke the randomness of natural materials, or the 50-year-old hemlocks in the backyard, but they were premeditated and detailed down to the fraction of an inch.

The new addition focuses its glazed gable end on those majestic hemlocks, unlocking the formerly housebound Tudor from its inward gaze. The addition, the house, and the trees sweep upwards, all reaching for new heights. 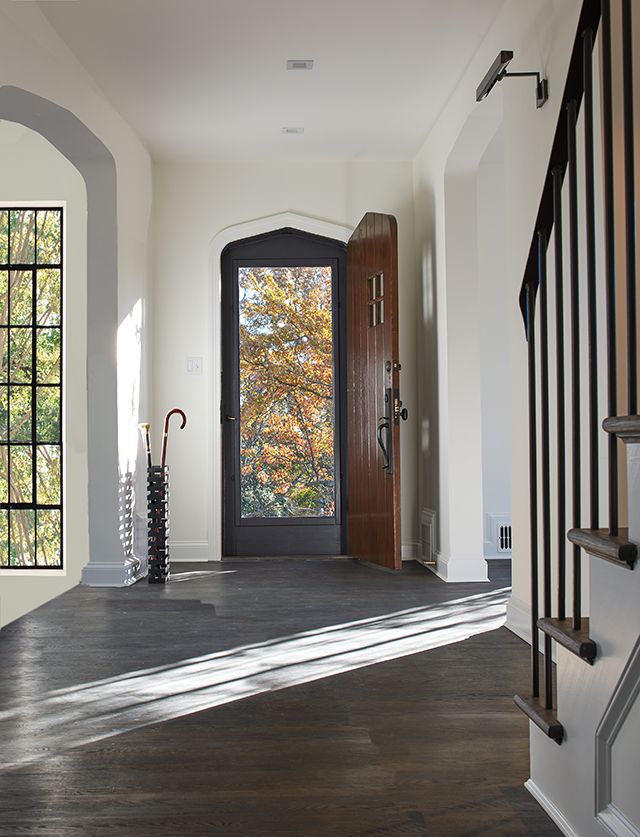 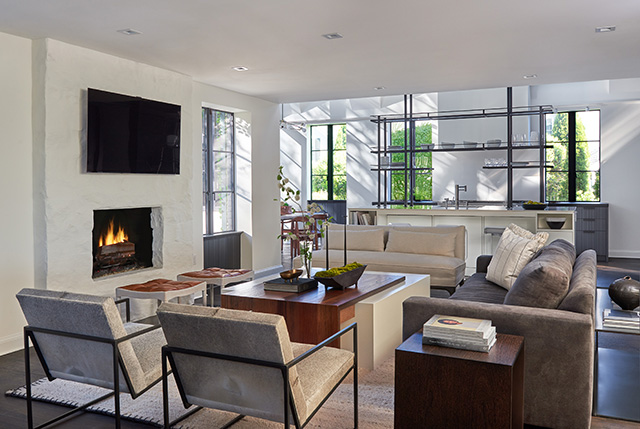 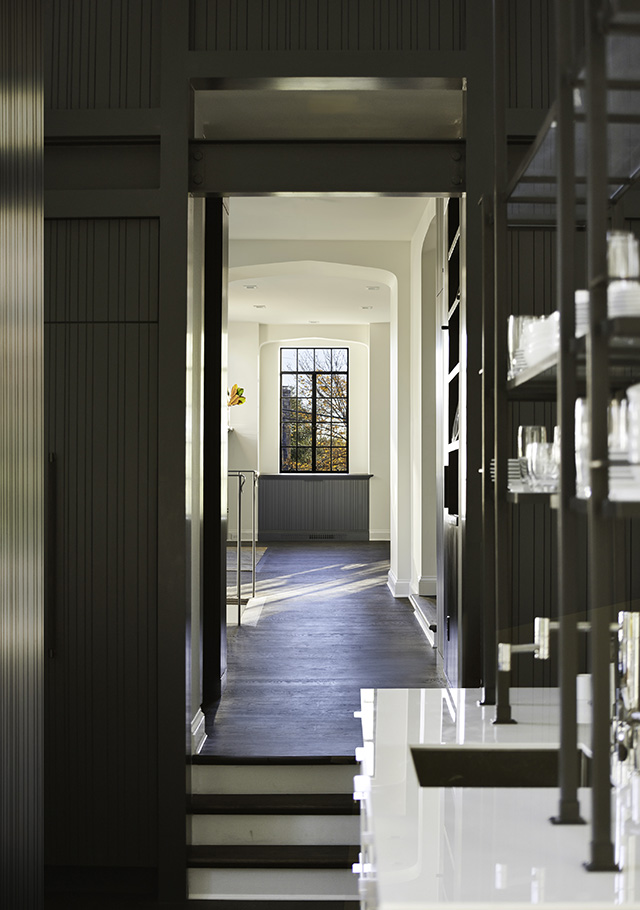 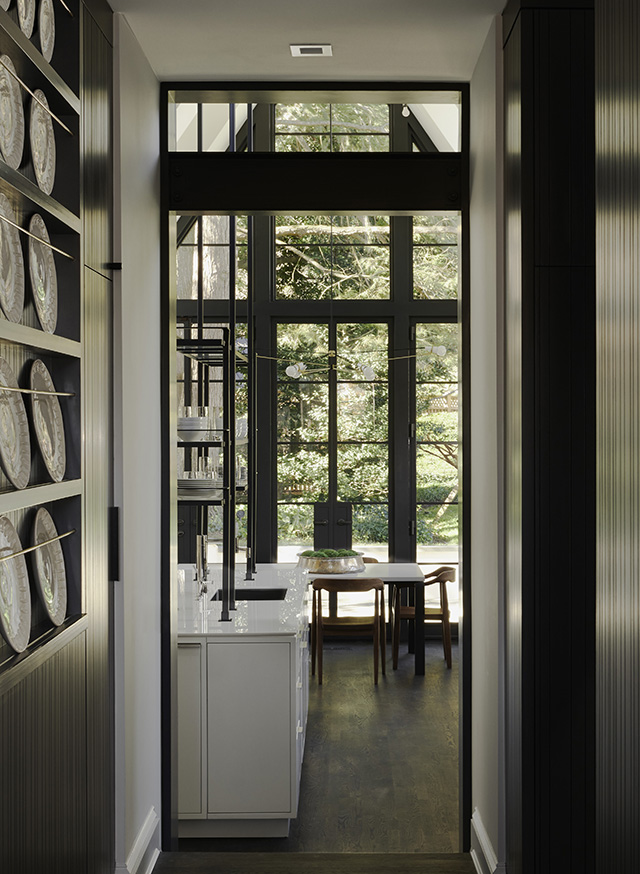 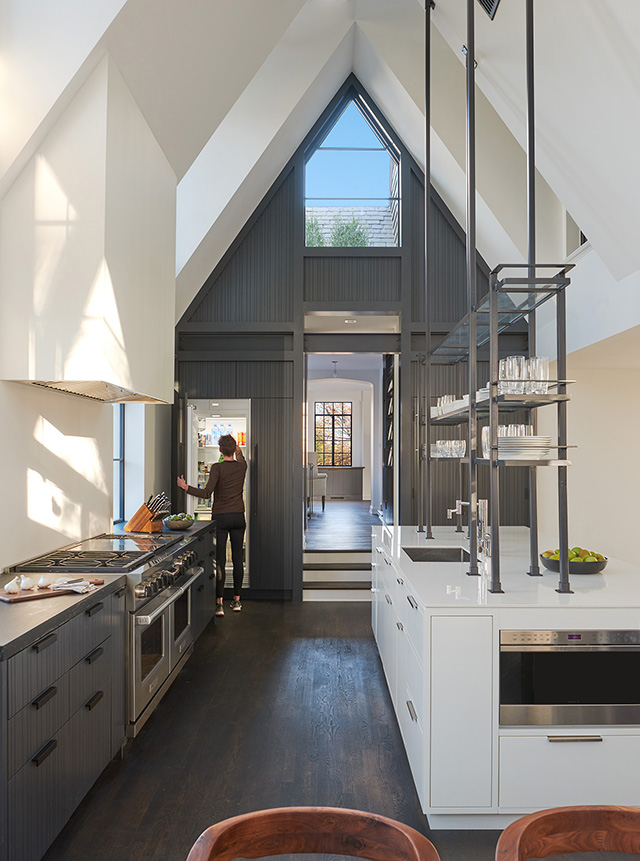 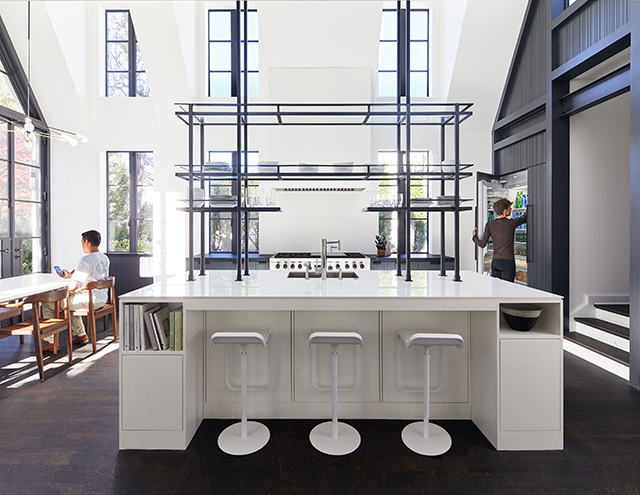 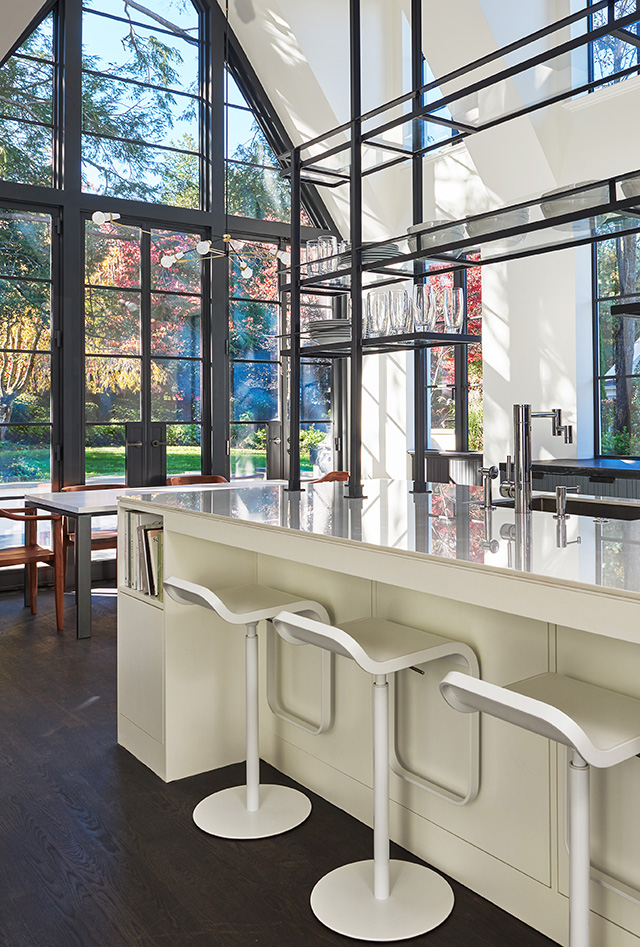 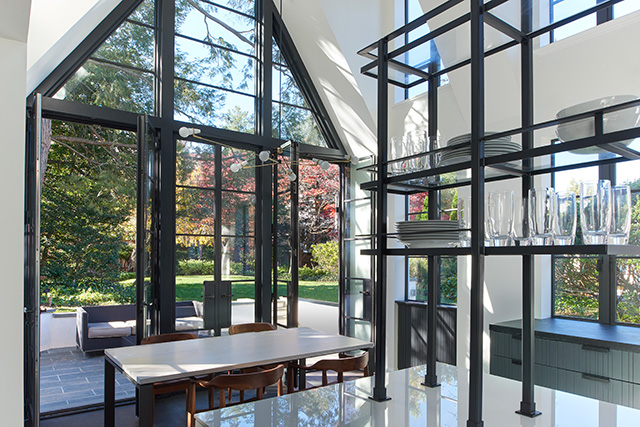 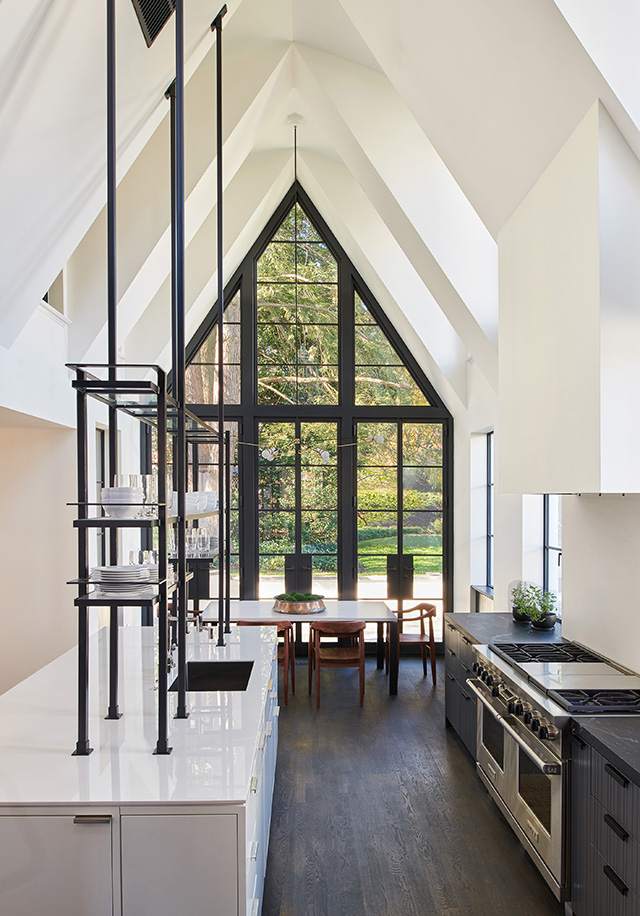 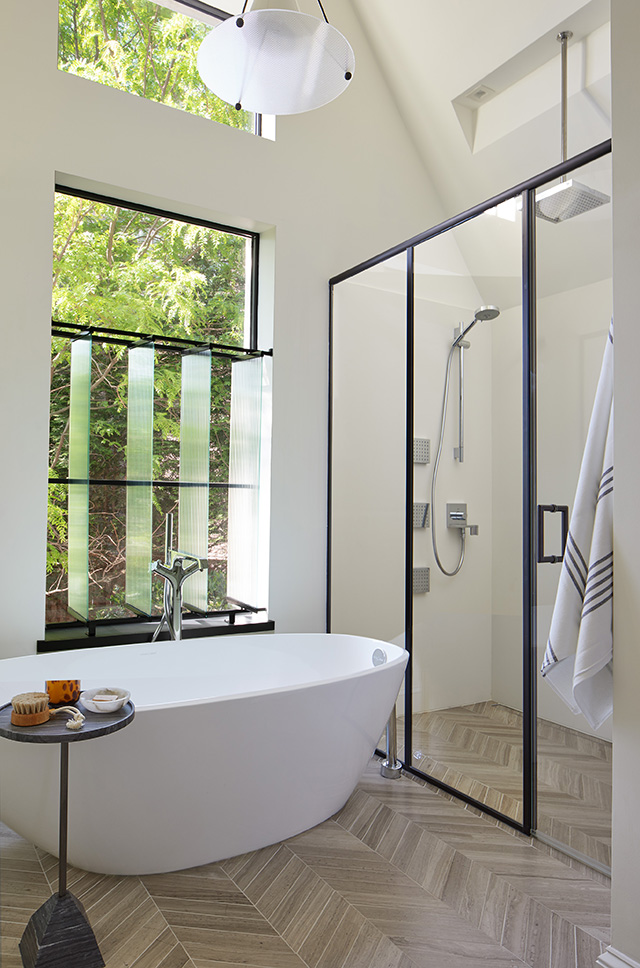 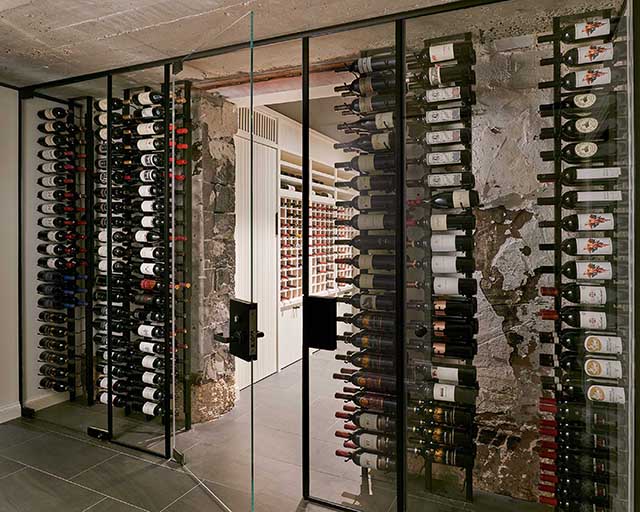 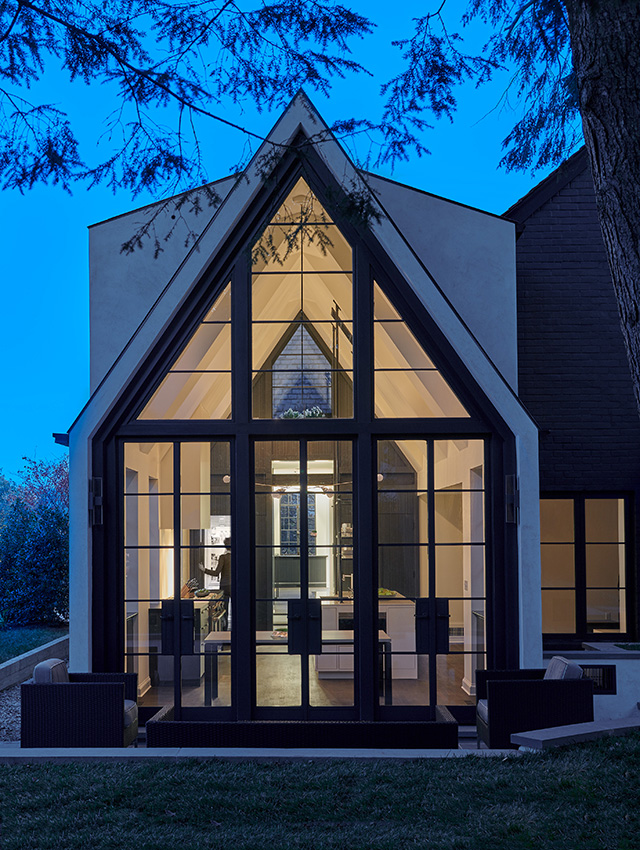 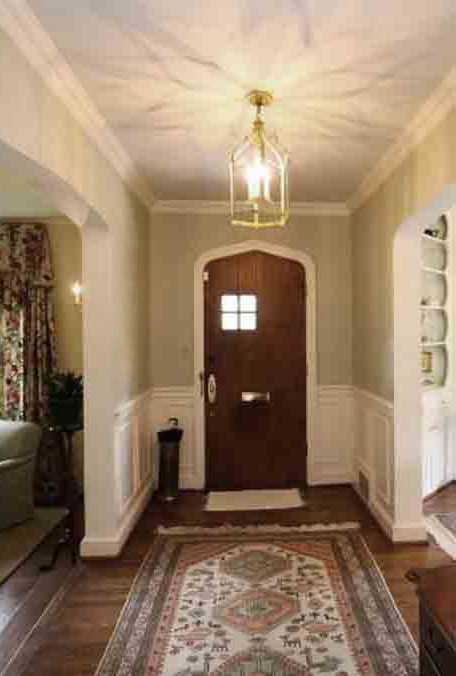 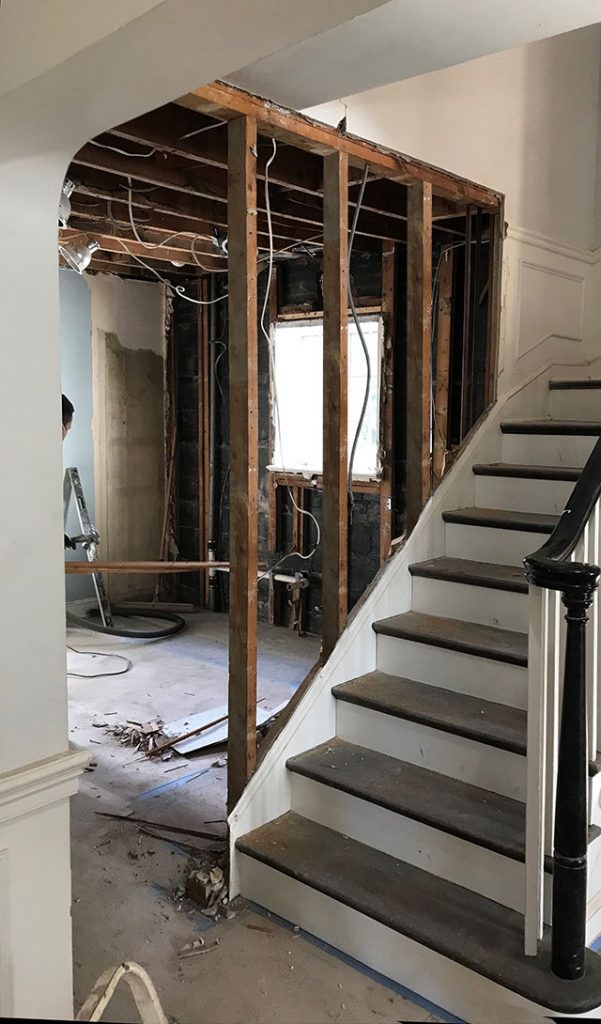 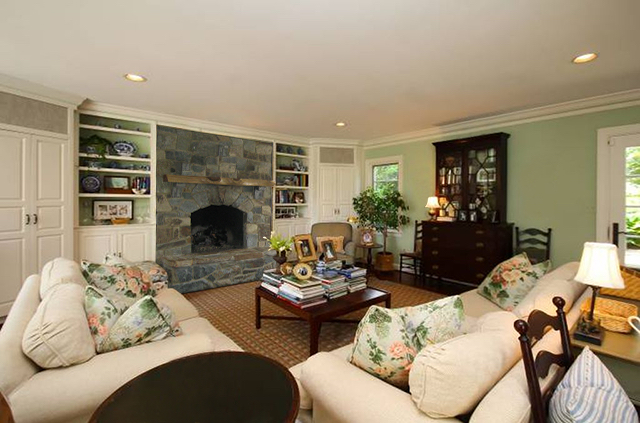 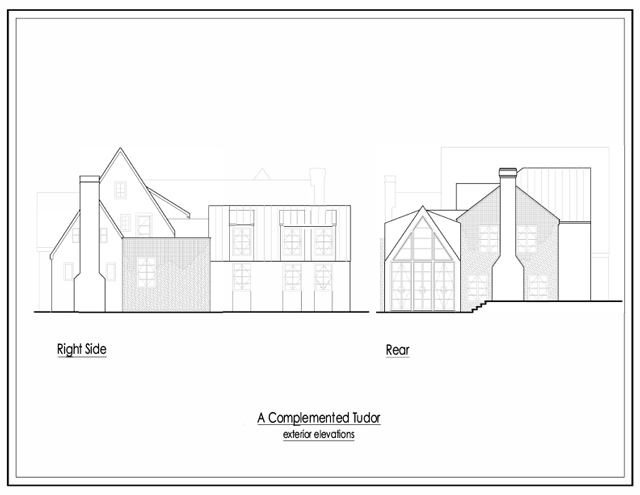 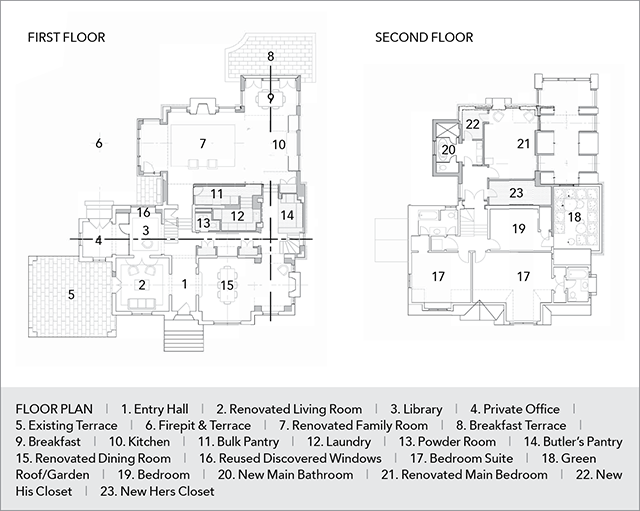