Gillson Park in Wilmette, Illinois, occupies 60 acres of prime land along Lake Michigan’s shoreline, providing the community access to park and beach amenities on a single site. This project replaces an aging and failing beach house, and the new meandering form operates as a mediator between the park’s two unique landscapes. The new transparent building was informed by a transparent process, which invited beachgoers to engage with a thoughtfully crafted community engagement plan.

“A great example of engaging the community in the design process.” – Jury comment

The project began with a failed referendum on a design for a new beach house developed by a different architect, which was voted down due to its size and expense. As a result, the park district was left managing a 50-year old beach house that was not serving the needs of its growing community. In addition, as demand for the beach grew, so too did the need for additional restrooms, lifeguards, and operational staff. Through this project, the park district has updated its facilities and enhanced the safety of its family-friendly waters.

Through 22 different public meetings over nine months, community consensus emerged. While the community understood the need to upgrade the earlier beach house, it was clearly protective of its greatest asset, the continuous mile-long lakefront beach. The team’s challenge was to provide amenities without constructing a building and enhance security without building a wall. The team’s response was unconventional. It removed an imposing iron fence to extend the dunes in order to deter access. By thickening the park’s edge with dunes, landscape plantings, and a classic dune fence, traffic is naturally funneled through a central checkpoint without barricading the beach.

“The project is organically sited like a sand dune on a beach and vanishes into the dune profile. A simple and effective concept with great social impact.” – Jury comment

The beach and an established dunescape to the site’s south provided the overarching design inspiration. The team extended the perceived ridgeline to the north, parallel to the swimming beach, letting the beach house meander much like a dune itself. A large pergola joins the utilitarian pavilions, further blending the dune, park, and landscape intersection.

“The project is organically sited like a sand dune on a beach and vanishes into the dune profile. A simple and effective concept with great social impact,” said the jury. “A great example of engaging the community in the design process.”

The new beach house is a seasonal building, operating only between April and October. Because of the tight usage window, the footprint was minimized, shifting circulation outside and around a cluster of small buildings. When the beach is closed, the entire beach house is winterized to mark the winter dormancy of the surrounding landscape. The beach house has no mechanical systems except for makeup air and exhaust at its concession stand. Strategically placed windows allow it to capture lakefront breezes and operate without artificial light. The windows also allow lifeguards to keep their eyes and ears on the beach during peak use. 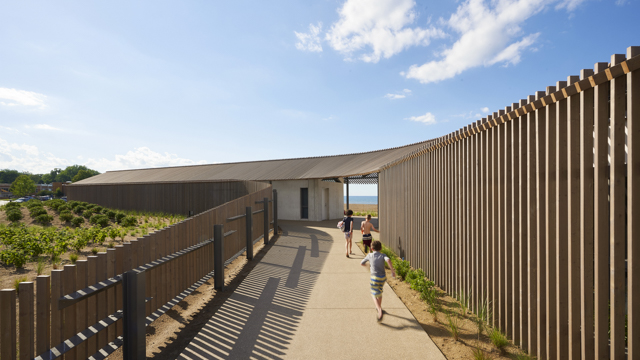 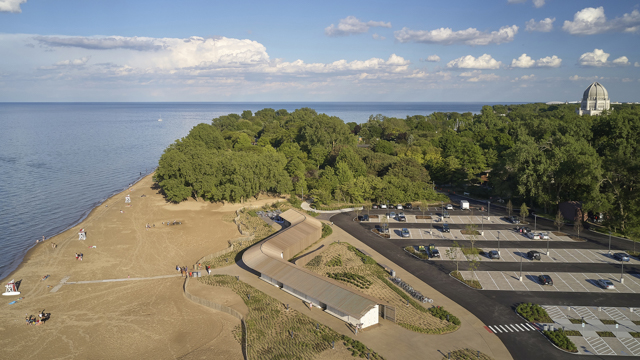 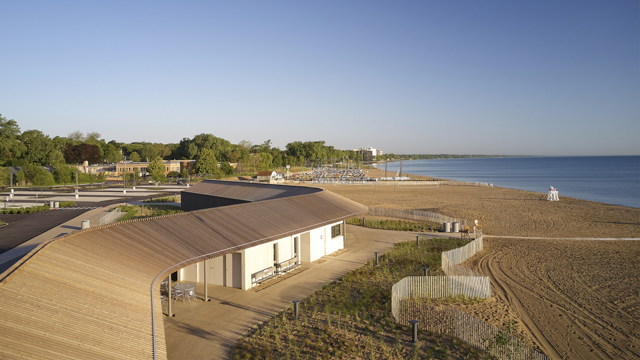 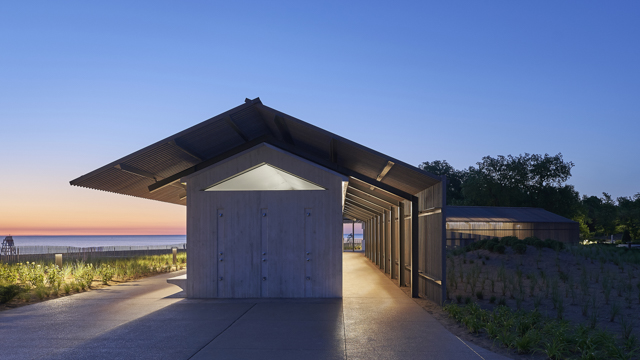